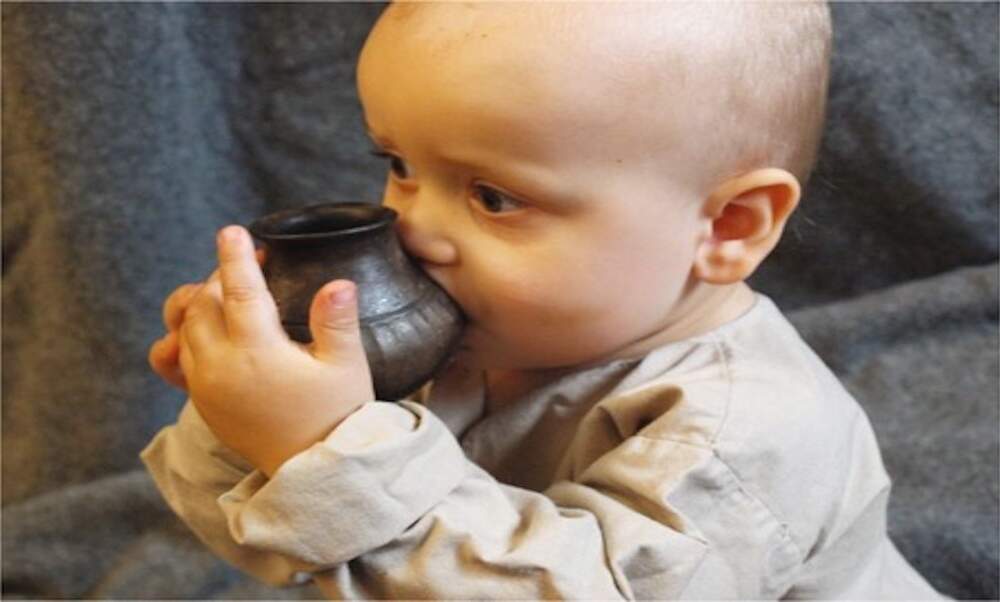 Scientists in Bavaria have unearthed some ancient clay "baby bottles" that offer a unique insight into child-rearing practices in the ancient world. The bottles feature a spout for babies to drink from and some are even shaped like animals. Scientific analysis of the inside of the bottles shows traces of animal milk.

Digs at two grave sites in Dietfurt an der Altmühl, in the southern federal state of Bavaria, have unearthed some extraordinary objects, dating back to 800 - 400 BC. Their discoveries include a selection of ancient "baby bottles" - child-sized cups, shaped like animals, with mouthpieces that allow the holder to drink from the side.

Archaeologist Dr. Katharina Rebay-Salisbury, from the Austrian Academy of Sciences, described the vessels as “incredibly cute” and suggested that they might also have been used to entertain children.

In an effort to determine who used these “sippy cups” and what was drunk from them, scientist examined three of the vessels, the oldest of which was made during the Bronze Age, 2.800 - 3.200 years ago. Samples were taken from each of the three vessels and tested using chemical methods. What they discovered were fatty acids, suggesting that the cups had once held milk from different animals like cows, goats and sheep.

The researchers working on the study now believe that animal milk could have been used as a supplement for mother’s milk or for weaning babies. “These very small vessels give us very valuable information about how and what babies were fed thousands of years ago,” explained Dr. Julie Dunne, Senior Research Associate at the University of Bristol and lead author of the study.

While fascinating, the discovery of these baby bottles in Bavaria is far from unique. Ancient ceramic or clay vessels have been discovered all over the world, some of them dating as far back as 5.000 BC; there is evidence that similar objects were used throughout the Greek, Roman and Ancient Egyptian empires.

Nonetheless, this most recent study is one of the first to use chemical methods on ceramic vessels to provide evidence for child weaning practices. Prior evidence has mostly come from the analysis of skeletons. The researchers recorded the results from this study in the well-known, multidisciplinary journal, "Nature".

Dr. Rebay-Salisbury explained that the historians working on the study are “interested in exploring cultural practices of motherhood that have had a massive impact on baby’s chances of survival.” The researchers would now like to expand the scope of their study geographically in the hopes of applying their results to other finds.