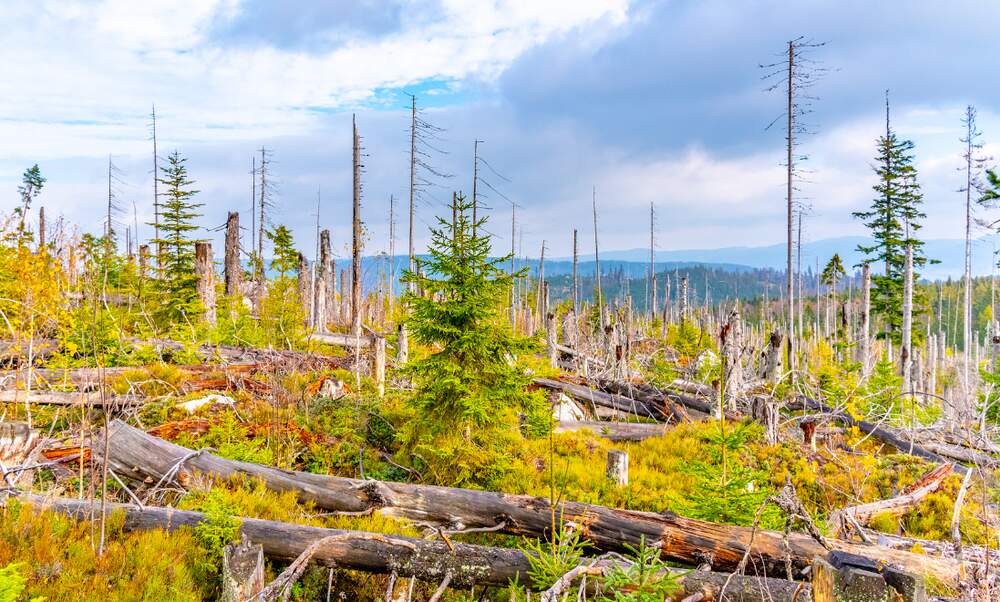 800 million euros to bring Germany's forests from brink of collapse

800 million euros to bring Germany's forests from brink of collapse

With Germany’s forests facing an unprecedented crisis, Agriculture Minister Julia Klöckner has unveiled plans for an 800-million-euro rescue effort. Recent data shows that millions of trees in the federal republic are suffering from severe damage, as a result of chronic drought, forest fires and insect invasions.

Germany must rescue its forests in order to fight climate change, Klöckner told reporters ahead of this week’s National Forest Summit, at which more than 170 associations and institutions gathered to discuss short- and long-term climate adaptation strategies. “Every missing tree is a missing comrade-in-arms against climate change,” she said. “Whatever we don’t reforest today, our grandchildren will, of course, miss.”

Speaking at the summit, Klöckner unveiled a proposal that would dedicate 700 to 800 million euros to the mission of revitalising Germany’s forests. With the BDF (Bund Deutscher Forstleute - Association of Forestry Workers) urging that at least a billion new trees be planted in Germany within the next decade, the money would fund the replanting of forest that has been lost in recent years.

Some of the funds would also be put towards clearing dead trees from affected areas, a gargantuan task for which Defense Minister Annagret Kramp-Karrenbauer has also pledged the Bundeswehr’s help. Since forests in Germany are primarily divided between small landowners, they would be unable to afford this without the government’s help.

According to the Federal Ministry of Agriculture, 180.000 hectares of forest in Germany are already severely damaged. The figure was previously estimated to be around 110.000 hectares, but the BDF is warning that it might reach 250.000 hectares by the end of the year - an area roughly equivalent to the size of Saarland.

Recent reports have laid bare the devastating impact that climate change and extreme weather in Germany are having on forests. Strong storms in 2017 and 2018, long-running chronic drought, the heat waves in 2019 and 2018 and the recent explosion in bark beetle populations have all caused the forests “severe, incalculable damage”, according to the Ministry’s key points paper for the summit. “Millions of trees show very high damage symptoms.”

Most recently, vast swathes of spruce, pine, beech and oak forest - many of them located in national parks - in Bavaria, Saxony, Thuringia and other states have fallen victim to a plague of bark beetles. Although a natural pest, a succession of unusually hot summers and mild winters has enabled the beetles to survive in greater numbers than ever before. Moreover, the drought-stricken trees are too weak to produce enough of the sticky sap that usually protects them from the bugs.

The effects of the unprecedented infestation are rapidly becoming clear: huge areas of what until recently was living forest have within the space of a few months have become graveyards of bare tree skeletons. When the beetles lay their eggs inside the bark, their larvae block the tree’s nutrients pathways. The tree dies within four weeks.

Forests need to be diversified

Unable to drive the insects out with chemicals, instead forest workers are attempting to fight back by promoting the beetles’ natural enemies - primarily wasps, which eat their eggs and larvae. Long-term, however, this will not be enough to save Germany’s trees. The fact that huge areas of forest are often planted with a single species of tree in neat rows means that they are particularly vulnerable.

To ensure their survival, forests in Germany need to be diversified, the Forest Owners’ Association argues. As well as planting more types of native trees, authorities should consider species that are more adapted to global warming. A major reforestation programme, however, would take years and could cost as much as 2,3 billion euros.