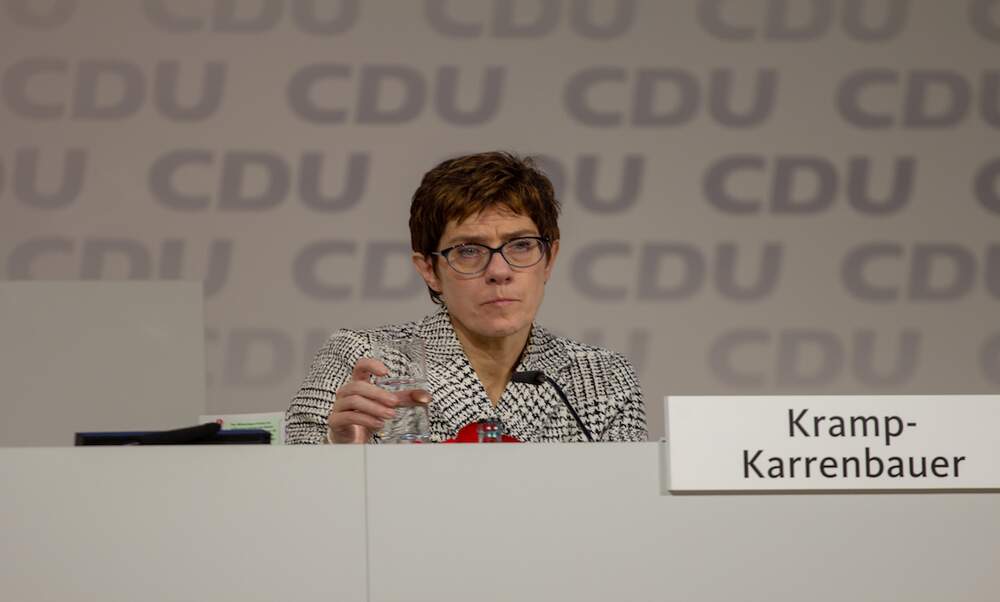 Annegret Kramp-Karrenbauer will not stand for chancellor

Annegret Kramp-Karrenbauer will not stand for chancellor

The leader of Germany’s Christian Democratic Union (CDU) and Federal Minister of Defence, Annegret Kramp-Karrenbauer, has announced she will not run for chancellor and will step down as the chair of the CDU.

AKK announces she will stand down

The leader of the CDU party, Annegret Kramp-Karrenbauer (or “AKK” as she is popularly known in the German press), announced on Monday that she would not run for chancellor and thus will resign from her role as party leader. She is reported to have said that both jobs should be undertaken by the same person.

Kramp-Karrenbauer, who succeeded Angela Merkel as the leader of the CDU and was reportedly the latter's preferred successor for the chancellorship, will now start the process of picking a new candidate for the leadership. She will then step down as chair of the CDU, although according a party source, Merkel wants her to stay on as Germany’s Minister of Defence.

Kramp-Karrenbauer’s announcement came off the back of the controversial Thuringia state election, which saw incumbent state premier Bodo Ramelow beaten to the top spot by Thomas Kemmerich (FDP), who won by a single vote after the far-right AfD opted to vote for him rather than their own candidate. The incident provoked outrage as the CDU in Thuringia appeared to break a long-standing agreement to not work with extremist parties.

The election raised questions concerning the unity of the CDU and AKK’s ability to lead the party through this tumultuous time. She admitted that CDU politicians in Thuringia acted against the will of the party and that her calls to dissolve the state parliament and hold a new election were largely ignored.

Kramp-Karrenbauer has been the leader of the CDU since 2018. Since her appointment she has had to face a number of controversies, such as being accused of advocating censorship back in May last year, which have led to doubts surrounding her ability to lead the country.

Four candidates for the leadership of Germany’s most powerful party have emerged so far: Armin Laschet, a supporter of Merkel’s refugee policy and the candidate most likely to keep the CDU centrist; Markus Söder, the state premier of Bavaria; and Jens Spahn, the Federal Minister of Health, who came third in the 2018 leadership election, are considered frontrunners.

Friedrich Merz, who lost out to Kramp-Karrenbauer in the 2018 party leadership election, quit his job at Blackrock last week, sparking speculation that he may return to the Bundestag.