Germany is one of the most bureaucratic countries in the world — Fact! Every aspect of your life in Germany is ultimately connected to a government office somewhere down the line, be it the passport office to get your residence permit, the local driving licence authority for your driving licence, the housing department, education, health, death, taxes, you name it. Everything imaginable will inevitably have a department connected to it, so if you want to settle down in the Bundesrepublik, you must come to terms with this, and it’s not going to be easy.

To compound your misery as a foreigner, you will soon find out that every department contains a myriad of sub departments, and in turn these are divided into even more compounds, offices, corridors, booths, each and every one with its own area of responsibility. The tricky part is finding out who does what - and do not expect any help in figuring that out. Good luck!

To illustrate my point, I’ve included below a screenshot of a list of appointments, taken from the website of the transport department at my local governmental office. You are required to select the reason for your visit from this list — even though to the naked eye many of the options look pretty much the same.

Do not make a novice mistake of selecting something that looks more or less accurate, because if you do that, you run the risk of being promptly turned away. No pleading, arguing or crying will help you. You’ll have no choice but to go back home and make another appointment, one that exactly matches the reason for your visit. This also applies if you go without an appointment. 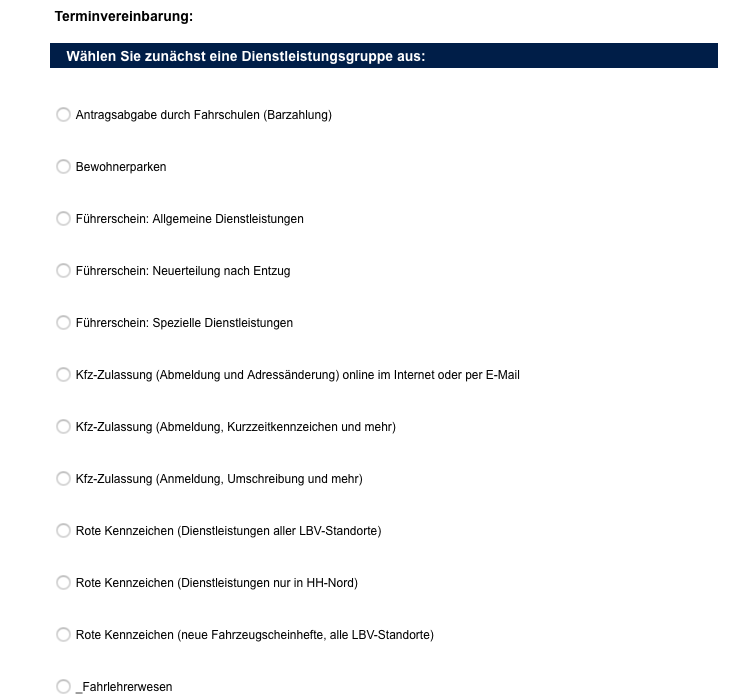 Of course, this is a German governmental office, so there’s no option other than to speak German, but to be kind I’ve translated the options for you. The tick box options are as follows, from top to bottom:

Last week, I got a fist full of German bureaucracy smacked in my mouth, and it was quite an ordeal — not so much for myself, but for my wife. The whole reason for going there was to get a residence permit renewed.

My wife, a South African national, has already been in Germany for a year. Unaccustomed to the German system, she was already freaking out a week before our appointment, but - being a trained lawyer - she prepared as best she could, spending days photocopying the necessary documents and endlessly checking over the list of stuff she was supposed to bring with her.

Due to coronavirus restrictions, the office was by appointments only. The sterile, spacious waiting room was full of empty chairs, with every second chair taped up in order to maintain the social distancing rule. After waiting for less than five minutes, our number was lit up on the board, and we proceeded to room number 22.

A heavy-set case worker in his mid-30s with a full hipster beard and glasses was typing away at his desk, and without so much as moving an eyebrow, he spoke to us in a calm, controlled, firm manner — one that has been instilled into his DNA after years of working for the state. He spoke fast with very little intonation, and in German, of course: “And what are you here for?” Gulp! This was enough to set the tone for the meeting, and immediately my 17 years of experience in Germany told me that this was going to be a tooth and nail battle.

To serve the German state - not you

A common misconception often held by expats in Germany is the idea that the first and foremost prerogative of government employees is to help the country’s residents. If you use that as a logical starting point for all your deliberations then you’ve already lost the battle. In actual fact, at the very top of their list is the oath to preserve and uphold the law and the legislation of the Bundesrepublik, its core values, and the wellbeing of its citizens.

Carefully note the order in which these words are written. The state and its laws come first and second, followed by its citizens.

Trying to be as calm as I could, I explained, and put the pile of documents, neatly stacked, on the table. I also explained that my wife spoke very little German, and begged his understanding. The case worker didn’t say a word, and instead began examining the documents carefully, his gaze flicking rapidly between the pile and his computer screen.

He then turned to me and said that he needed a different photo of my wife. According to him, the one we gave him was identical to the one used on her old residence permit. Having examined the website and every single line of its font size ten print, I retorted that the website stated the photo can be as old as twelve months. To this, he responded that the information on the website was out of date. End of argument. Whichever way you twist it, you lose.

At that moment, the case worker sensed that he might have gone too far and pointed us in the direction of a photo booth, which, luckily, was located on the premises. However, this particular gambit did not end there, as my wife, having understood what the problem was, protested, pointing out that indeed the photo in question was not the same: her hair was clearly a different length. She had only had the photo taken in February for her driving license, and thus it could not be more than six months old.

Having realised his mistake, he eventually conceded, but, without apologising or acknowledging this, he simply moved onto the next part — the integration course. He asked for evidence that this had been completed. I said that we didn’t have any evidence, after which a long pause ensued.

He then said that having a certificate of completion was a prerequisite for getting a residence permit. My facial muscles tightened, but I knew that information wasn’t correct, so I calmly rebuffed his attack by saying that only an unlimited visa requires the certificate. And, since my wife was applying for a three-year permit, she was not required to provide the course certificate. He left the room — probably to check with his colleague — and returned confirming my statement, once again, apology accepted.

In situations where people sit around and wait in silence, the most natural thing for an Anglo-Saxon would be to try to form a bond between oneself and the person on the opposite side. They try to establish a friendly rapport, lighten the mood, tell a joke, ask about the weather, football, really anything to break the ice and the uncomfortable situation they find themselves in.

If this is you, then you must summon all your self-control and resist the urge to do anything of the sort. As you will soon come to realise, Germans aren’t big on small talk. So the German civil servant will see this mindless chatter as a nuisance, an attempt to distract him from his perilous and important task, and this will cause the opposite effect of the one you intended. You’ve been warned. Now back to the story.

It was quite apparent that the civil servant assigned to us was displeased at not being able to unravel his victims to the point of agony and despair, but he did have one more trick up his sleeve. The final attack — the winner-takes-it-all kind of round — was the financial statement. He spent the next 10 minutes asking various questions and setting various traps, just to see if his victims would react.

Then, after typing furiously on his computer for several minutes, he looked over and said that the numbers didn’t add up, and that based on the financial information we had provided, he would not be able to issue a permit. BAM! My poor wife was visibly shell shocked. In her mind, she was already sitting on the repatriation flight to South Africa, saying goodbye to her husband. Her German adventure had come to an abrupt end.

A lot of people would have argued, in view of the fact that we were then sitting in the middle of a global pandemic, that perhaps the financial situation should be reassessed, and that it would be a bit rich for the government to deport people in such tough times. But this means absolutely nothing to a case worker, whose prime objective — as we have described above — is to preserve the German law and act upon it.

My response was calm and friendly. I offered to show him my bank statements, which proved we had enough money to sustain ourselves for the duration of the residence permit. Game, set and match! He looked at the statements and then began typing again without uttering a single word. Another five minutes passed, an eternity. A denied application would mean that we would have a week to appeal, would have to cancel our holiday, instead spending that time visiting the various Amts, and filling out paperwork until our fingers bled.

To our relief, the case worker confirmed the amount was sufficient, and that a permit would be issued. All that was left was to pay the admin fee and get as far away from that place as possible. My wife told me on the way out that she felt like drinking a whole bottle of vodka. To add insult to injury, she also told me that the case worker actually spoke perfect English, having conversed quite fluently with her after the meeting had ended. Welcome to German bureaucracy, I thought to myself.

Fadi moved to Germany in 2007 from the UK to live in Hamburg. He works as a music composer, musician, producer, educator and a translator. He has just published his...