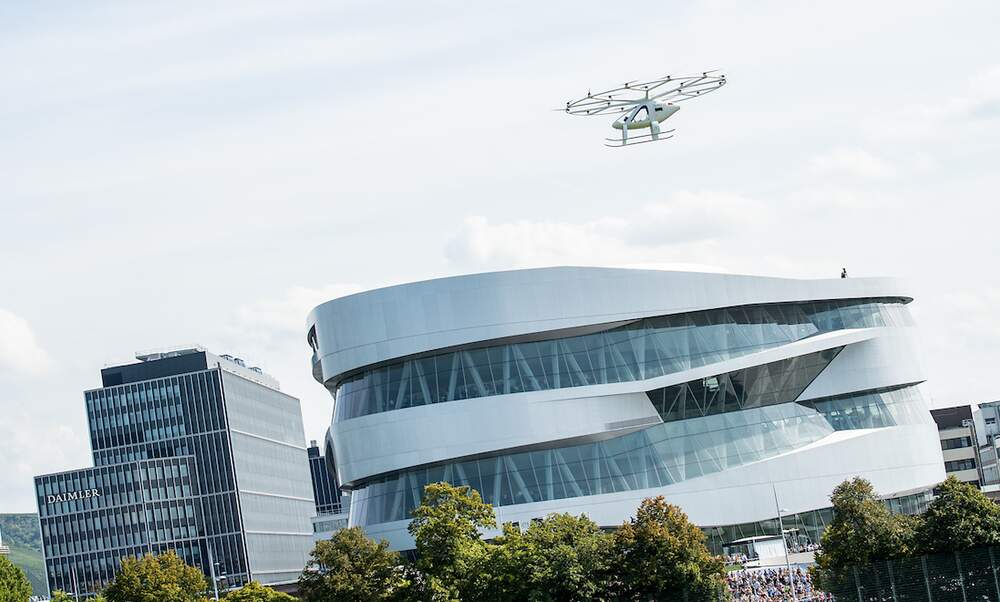 Say hello to the future of transportation! Volocopter, a German start-up specialising in flying vehicles, has just shown off its new "air taxi" at the Mercedes Benz Museum in Stuttgart. The successful voyage puts us one step closer to a future where we can call a remote-controlled, electric, flying taxi with just a couple of taps on our smartphones!

Maiden voyage of the "VoloCity"

Volocopter’s "flying taxi" recently took to the skies on its first official city flight from Stuttgart’s Mercedes Benz Museum. The aptly-named "VoloCity" is a two-seater vehicle that riders will one day be able to call from their smartphones. It features 18 motors and 9 rechargeable batteries, giving it a top speed of 62 mph (100 kmph) and a range of 16 miles (27 kilometres).

The VoloCity marks an important milestone in urban mobility and air travel, providing a clean, safe and quiet way of travelling. The CEO of Volocopter, Florian Reuter, said that the air taxis “open up a completely new dimension of urban mobility" and have the capacity to “ease traffic congestion in major cities around the world.”

Volocopter: Flying into the future

Volocopter garnered significant attention in 2017 after securing a 25 million euro investment from Daimler, the parent company of Mercedes Benz. The company has attracted numerous lucrative investment offers from international companies, notably Intel, as well as 55,3 million dollars of funding from Geely.

The company's remotely-operated aircraft have taken to the skies numerous times before, but this is the first time any of their vehicles has flown over a city. The VoloCity hit headlines back in August after it was the first of its type to take off from an international airport.

Not content with their ground-breaking prototype, Volocopter plan on opening their own airport in Singapore by the end of the year. The building, dubbed "VoloPort" will feature passenger lounges and take-off and landing infrastructure, all within easy reach of the city.