People often say their wedding was the happiest day of their life, but as an expat in Germany, it can be hard to know what to expect! That's why we've put together this guide to German wedding traditions and getting married in Germany: from rings, clothes and cakes to gifts and wedding day pranks.

Getting married in Germany

In Germany, getting married is the only way that couples can have a legally recognised partnership. Registered partnerships were phased out in 2017, when marriage rights were extended to same-sex couples.

Small wonder, then, that getting married is still pretty popular in the federal republic - while the number of divorces continues to drop - in 2019, a total of 416.300 couples tied the knot, including 14.000 same-sex couples.

Marriages in Germany take place in the presence of a registrar, though some couples follow this up with a religious ceremony. In 2016, around one in five of all weddings included a church ceremony.

Unsurprisingly, most people choose to get married in the warm, sunny months between May and September, when the chance of getting a fine day is the highest - although, knowing the German weather, nothing is ever certain.

A lot of aspects of the "typical German wedding" may seem pretty familiar - although there are some surprises!

In Germany, couples wear their wedding rings on the right hand. Traditionally, the engagement ring is worn on the left hand - although many couples actually forego an engagement ring altogether.

After the couple are wed, the engagement ring then switches over to the right hand with the wedding ring - which is usually a simple band - to symbolise the change in social status. 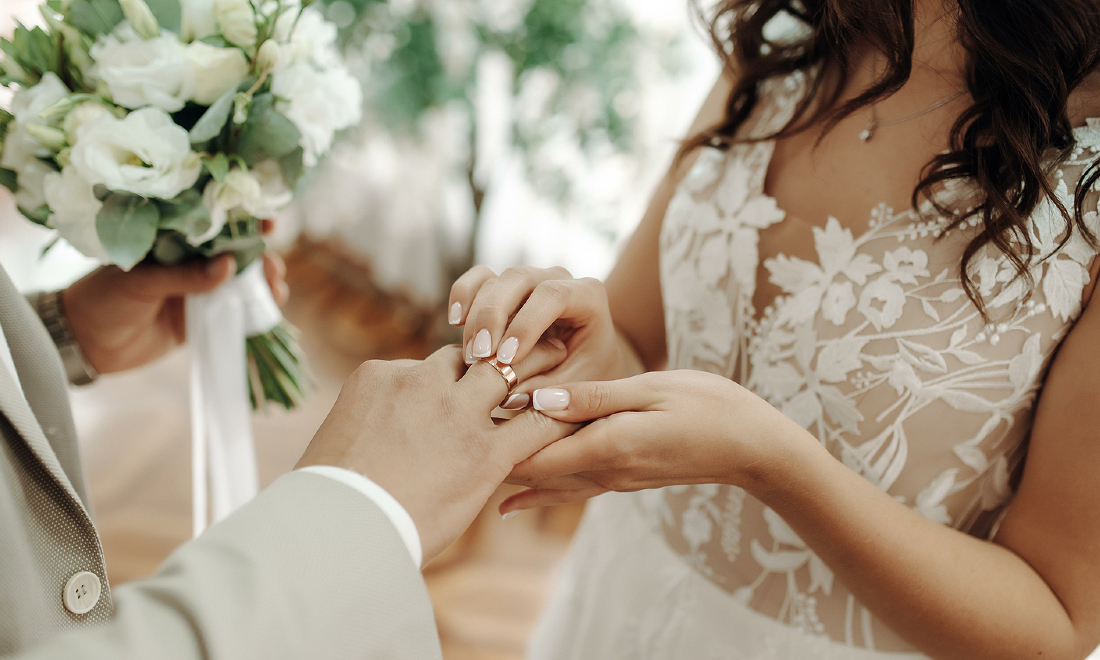 Wedding attire varies greatly from country to country, with internationals often preferring to wear the traditional clothing of their home country. For the true German wedding experience, there is an extensive list of traditional items for the bride and groom to don!

Historically, German brides would wear black dresses with while veils. Nowadays, however, brides in Germany have adopted more the more common tradition of wearing a white wedding dress, usually without a long train.

German brides tend to wear more of a ballgown-style wedding dress, with a fingertip length veil. Less women choose to wear a veil nowadays than in the past, but it is still popular, especially in church weddings. Most importantly of all: it is absolutely forbidden for the groom to see the bride before the ceremony!

At a wedding in Germany, the bride usually wears Brautschuhe (literally bride shoes) during the ceremony and reception. These are white shoes that can be flat or heeled, according to the bride's preference, but traditionally have a wide, low heel.

Most bridal shoes have a small thin white strap across the ankle or the top of the foot to hold the shoes on, although there are a variety of different styles of shoe available for the bride to choose from.

It’s also tradition that the bride buys the shoes from her savings, but using only one cent coins! During the wedding reception, the shoes are put up for auction. Tradition dictates that the groom puts in the top bid, and returns the shoes to his new wife.

The wedding bouquet and white ribbon

As in many other western countries, in Germany the bride carries a wedding bouquet on the special day. This is usually given to her by the groom. The wedding bouquet is then used after the ceremony, when the bride throws the bouquet over her shoulder to a group of unmarried women. The idea is that the one who catches the bouquet will be the next to get married.

The bride also carries strips of white ribbon with the bouquet, which are given out at the end of the wedding so that guests can tie white bows to the antennae of their cars for the drive to the wedding reception.

Traditional groom’s attire in Germany is somewhat more simple: an all black suit and a white shirt are the way to go. A classic tuxedo or well-tailored dress suit is perfect for the groom’s special day, and the groom has a lot of freedom as to the cut, customisation and accessories for the outfit.

This places a lot of trust and responsibility on the people that the bride and groom select, making it a true honour to be chosen! The best man and maid of honour can be of any gender, can act as witnesses at the civil ceremony before the wedding, and can even plan bachelor and bachelorette parties for the bride and groom.

If there’s one thing that the Germans are phenomenal at, it has to be food, and their wedding cakes are no exception! The Spitzwecken is one piece of food theatre you might come across at a German wedding. It is a three metre long cake that is brought into the reception room on a long wooden board by a group of guests.

The group pretend to be unable to get the cake into the room, and after much toing and froing (and perhaps a pause for a German beer or two), the guests decide to saw the cake and the wooden board in half, to fit it through the door. Everyone cheers and helps themselves to a piece of cake.

There are many different types of dances that take place at weddings, but at a German wedding, there are two main ceremonial ones. The first dance of the evening takes place between the bride and groom, and is usually a waltz.

After this dance, the bride dances the next song with her father, and the groom with his mother, while the bride’s mother and groom’s father dance together. After these two traditional dances, the fun really begins!

Despite all the paperwork and ceremony, German weddings also have some really fun customs and a lot of unusual traditions. These are the most well-known and commonly-practised German wedding traditions.

A few weeks before the wedding, it is customary for the bride and groom to head out for a bachelorette or bachelor party (Junggesellenabschied) at the local pub.

During the night, the bride and groom’s friends usually attempt to embarrass them as much as possible, by making them undertake many silly tasks. These tasks often involve selling things to strangers, dressing up in strange and embarrassing outfits, and even cleaning things!

On the night before the wedding, the family and friends of the bride and groom come together to break china and porcelain dishes as a good luck omen for the soon-to-be-wedded couple.

Once the china-smashing is over, the bride and groom must work together to clear up all the mess, symbolising how the couple will have to cooperate and work together during their upcoming marriage.

After the wedding ceremony itself, the bride and groom sometimes head outside armed with a saw, and attempt to cut through a large log together. Though this may sound strange, the sentiment is sweet - as soon as they are married, the log is the first obstacle that the couple must overcome!

Once the newlyweds have tackled the ceremonial sawing of the log, the couple are finally ready to journey happily onwards with their marriage (and their wedding reception)!

The most famous German wedding dance is the veil dance, where the bride and groom dance under the veil. After the dance, the veil is held above the bride and groom’s heads, and unmarried guests run to try to rip a piece from it. Legend has it that whoever tears the largest piece of the veil will be the next bride!

The kidnapping of the bride (Brautentführung) is another quirky German wedding tradition. The “kidnapping” takes place during the wedding reception, where the groom’s friends “abduct” the bride, and the groom must do everything he can to find her.

The group will most likely head from bar to bar in the local area with the bride, making it even more difficult for the groom to find his new wife! Once the groom has found his wife, he must pay a ransom to the kidnappers - usually paying the kidnappers’ bar tab will suffice.

Other pranks at German weddings

Other pranks at German weddings often take place after the ceremony. Friends of the bride and groom will organise a series of pranks for the newly married couple to find when they return to their bedroom or house after the wedding.

These include hiding alarm clocks around the room, or filling the house with balloons. The goal is to make the couple’s first night of marriage as memorable, funny and annoying as possible.

After the wedding ceremony, a procession of cars will drive around town, honking their horns as they pass through the area. Often, other drivers will honk back, to wish the newly married couple good luck in their marriage. 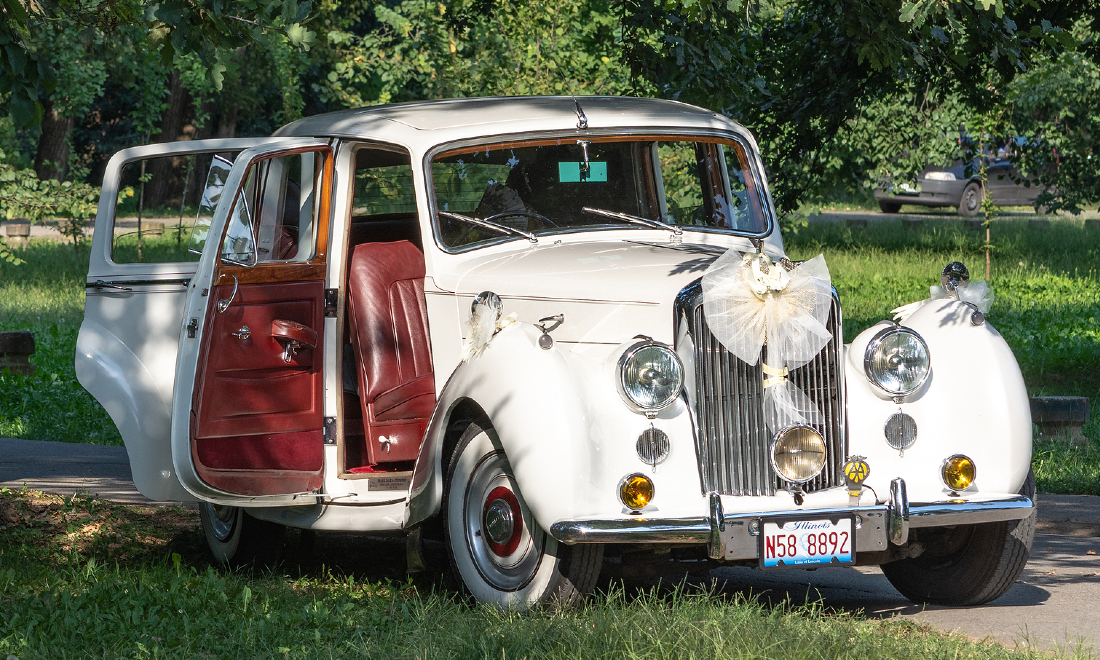 In Germany, the bride and groom tend not to have a gift registry, as is customary in a lot of other western countries. This can make gift-giving a little more difficult, but if you're really stuck for ideas, it’s perfectly fine for guests to give the happy couple money for their new life together instead.

Like any gift-giving occasion, the best gifts are usually things that come from the heart - if the bride has spoken about travelling, give something travel-related, if the groom has expressed his intention to buy a house, give money!

Dating in Germany can seem overwhelming, like dating in any foreign country, but it can also be a rewarding and exciting experience. The overarching rule of dating in Germany is to “feel things out”, and read the situation, so that neither party moves too quickly or slowly for the others’ liking. Here’s a run-down of some basic rules for dating in Germany:

The first rule of dating in Germany is simple, and it is the same as applies to most social events in the country: be on time. If somebody is taking time out of their day to spend on a date, it is only respectful that their date should turn up on time.

Secondly, dating multiple people at the same time is not really done in Germany, and is considered offensive. Though in many cultures, it is acceptable to date multiple people simultaneously before going exclusive, this is not the case in Germany. Pick a date and stick to that person to avoid hurting your date’s feelings.

Gender equality is valued in Germany and is a strong backbone of German society. This means that a German man will not give his date special treatment on the basis of gender, so the bill at the end of a date will most likely be a split one.

Flirtation and compliments may fall on deaf ears when dating in Germany, but don’t be alarmed, it’s not your fault! Germans don’t really value small talk when dating, and flirting may even come across as insincere. Instead, try to hold a deeper conversation with your date, and get to know them a little better.

Don’t get too upset if they’re harsh

Germans are known all around the world for their refreshing honesty and directness. Though this means that you can get straight to the point when you talk to a German person, it can also sting if your date is a little too frank with you. It’s important to consider that if your date says something that offends or upsets you not meant to be hurtful, it’s meant to be honest, so that people don’t end up hurt later on.

The wonderful world of love and weddings in Germany

Now you're pretty much an expert on getting married, wedding traditions and dating culture in Germany! So get out there and put your new knowledge to good use.