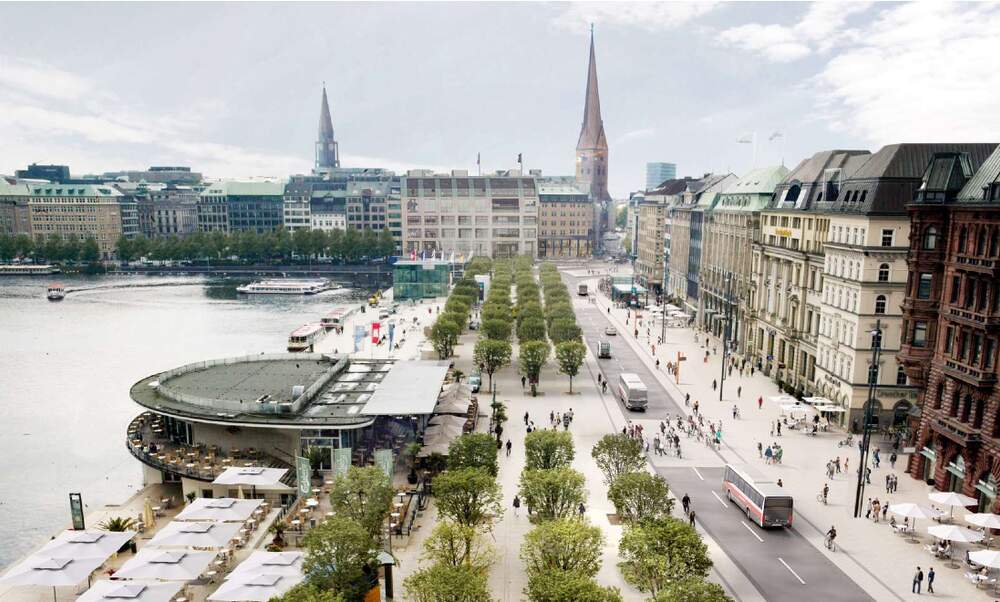 Plans to make the centre of the city of Hamburg a lively, car-free zone are finally becoming concrete. From October onwards, the Jungfernstieg in downtown Hamburg will be closed to motorised individual traffic.

Cars to disappear from Jungfernstieg in October

Senator for Transport, Anjes Tjarks, announced last week that plans to transform Hamburg’s city centre are proceeding apace: “We want to take the cars out of Jungfernstieg this year,” he said. “It is one of the most beautiful places in this city - and we want to make it even more beautiful to stroll through. We want the people of Hamburg to be able to experience this place again in a different sensory way.”

According to the plans, the Jungfernstieg, the wide promenade in the heart of the city centre, will be totally redesigned to reduce exhaust emissions, calm traffic and increase safety for pedestrians and cyclists.

The old cycle path will be removed to create a wider footpath along the Binnenalster, with more room for green spaces. A new cycle route will then be added, along with additional barrier-free pedestrian crossings. Other than bicycles, only buses, taxis and delivery vans will have access; cars will be diverted away from the area.

According to Dorothee Stapelfeldt, Senator for Urban Development and Housing, the idea is to “make Hamburg’s inner city even more lively and attractive [by] developing Hamburg’s most prominent promenade into an attractive, green and liveable place in our city.”