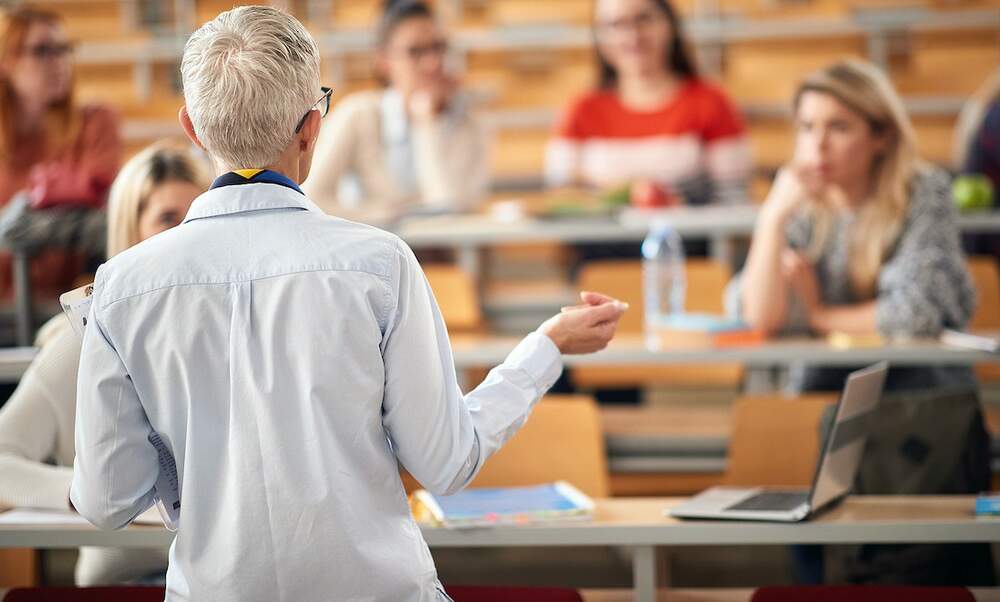 Most Googled: Why do German students knock on their desks?

Most Googled: Why do German students knock on their desks?

Who reading this hasn’t fallen asleep in a class or lecture? It’s almost a rite of passage for modern university students to catch up on some much-needed sleep during a 9 am lecture after a late night out.

Catching a quick power nap during class can be a dangerous game though as, if you don’t wake up in time, you can all too easily find yourself in an embarrassing situation where you either wake up to an empty lecture hall or, even worse, being shaken awake by an angry lecturer.

However, this actually wouldn’t be so much of a problem at a German university because, if you have fallen asleep in class, you are likely to be woken up at the end of the lesson by a riotous cacophony of loud knocks.

Knocking on desks at the end of a class or a lecture is a longstanding German tradition and one that has been baffling foreign students for years. So, in this week’s edition of Most Googled, we are going to try to find out why German students knock on their desks instead of clapping.

The practice of knocking on desks or tables at the end of a university lecture or presentation at school in Germany is known as “academic knocking” (Akademisches Klopfen). In recent history, it has been the way German students show appreciation after a class, lecture or presentation. It is essentially an alternative to applauding.

According to Friedhelm Golücke, the founder and ex-chairman of the Association for German Student History (GDS), knocking began in the 18th century. Students would “drum” on their desks with wooden sticks if they didn’t like the professor’s lecture. At some point, although it is unclear when or why, knocking became akin to a round of applause.

Another explanation has also been offered by Notker Hammerstein, a now-retired history professor at Goethe University in Frankfurt. He suggested that university students usually only have one hand free during class, as they would be taking notes. Thus, students could only express an opinion with one hand, with knocking becoming the norm as opposed to clapping.

The meaning behind the knock

While, according to Golücke, the knocking was originally a sign of dissatisfaction or opposition, it is now seen as a form of applause. It is used as a way to show appreciation towards the teacher for the class or presentation they have just given, and the work that went into preparing their lesson. It is now customary for students to knock on their desks after each lesson or lecture. It is also seen as a sign of respect, so much so that some German academics even consider clapping to be disrespectful.

It has been suggested that the reason for knocking being a mark of respect is due to professional social status. Historically, actors and musicians, whom the audience would usually applaud after a performance, were considered a much lower social level than a lecturer at a university, which was a rather prestigious position. So, students would not praise their teachers the same way they would praise a lowly entertainer, giving rise to the more respectful knock. Moving into the modern-day, actors and entertainers have become a lot more respected; however, the tradition continues to endure.

As already mentioned, knocking is a long-standing tradition in German academic institutions, but it wasn’t just used to show appreciation. Back in the 18th century, new students, called Füchse (foxes), would be greeted to their new university by knocking, with the older kids using sticks to drum on the floor.

Interestingly, between the end of the 18th century and the mid-19th century, whistling became the way of welcoming new students to university. Around this time, students began to whistle at their teachers as a way of showing their appreciation. Perhaps unsurprisingly, this practice did not continue to the modern-day.

There is no definite explanation as to why German students knock on their desks after a lecture or how it came to be seen as a sign of appreciation or respect. According to Golücke, the matter hasn’t been properly investigated and, while sources on the subject exist, they are more likely to be found collecting dust in private homes than in libraries.

If you ask teachers about it today, you’ll probably get a different answer from each teacher you ask. The truth is, nobody really knows why German students knock on their desk or why it became a positive reaction. It seems that it is simply just a tradition that developed at some point in history and continued until today.

Some people think it’s to be mindful towards people that are anxious or easily startled, some teachers might tell you that 400 students clapping at the same time is too loud and annoying. Whatever the reason might be, make sure to remember to knock instead of clap if you ever find yourself in a lecture at a German university.

You learn something new every week

We hope you enjoyed exploring this little quirk of German culture. Let us know in the comments any theories you might have heard as to why students knock on their desks. Also, make sure you tune in next time for another edition of Most Googled, where we try our best to answer the most asked questions about Germany.