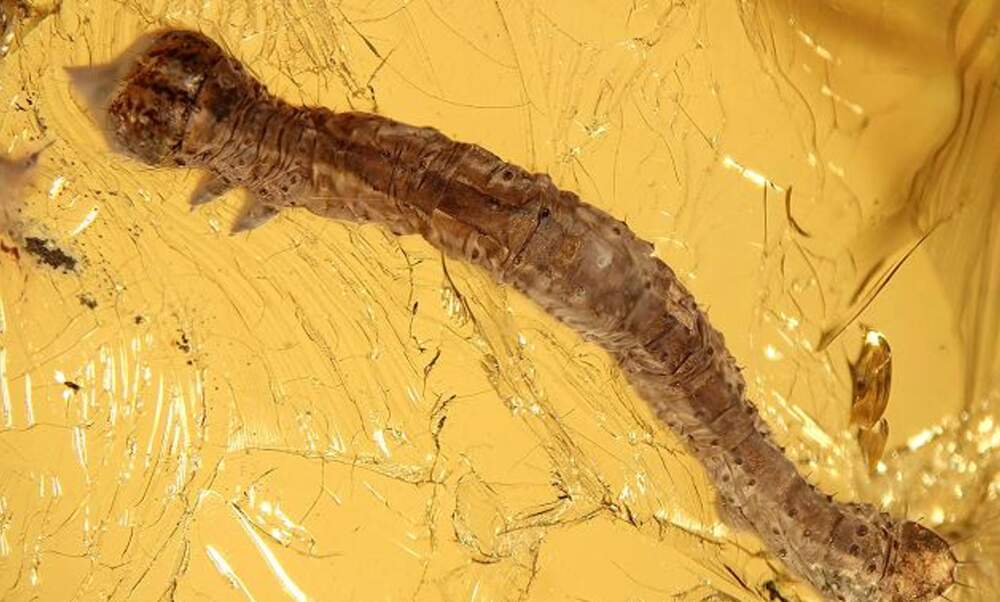 German scientists have just discovered a 44-million-year-old caterpillar, preserved inside an ancient block of amber. It’s the first time such a specimen has been found.

The very old caterpillar is a new species

Researchers from the Bavarian State Collection of Zoology in Munich recently made an exceptional find. In a paper published in the journal Scientific Reports, they revealed that they discovered a 44-million-year-old caterpillar.

The tiny critter is around 5 millimetres long and appears to be an entirely new species. Its discoverers have given it the name Eogeometer vadens and designated it under the family of Geometridae butterflies, one of the largest butterfly families with more than 23.000 different known species.

Caterpillars preserved in amber are rare

But what makes the caterpillar extra special is the fact that it was discovered in a block of Baltic amber. As the paper’s co-author Axel Hausmann explains, “Caterpillar finds in amber are rarities in any instance, and this is the first ever large butterfly fossil to be found in Baltic amber.”

These kinds of finds are uncommon because blocks of amber are drops of tree resin that have hardened over millions of years. For the caterpillar to be preserved in this way, it would have had to be in exactly the wrong place at the wrong time (or the right place at the right time, from a scientific point of view).

It’s especially unusual because caterpillars are generally nocturnal animals, while resin usually needs direct sunlight or warmer daytime temperatures in order to liquify and fall in drops. So, all in all, a very lucky combination of circumstances (or unlucky, for the poor caterpillar).

Fossil will shed light on evolution millions of years ago

Geometridae caterpillars are unusual because they only have two or three pairs of legs, instead of five, like most other butterfly species. This gives them a rather ungainly manner of walking - they push their rear legs up to their front legs, then stretch out and repeat the action. It’s slow, but it gets the job done.

The scientists said that the fossil would allow them to gain an insight into evolutionary processes 34 to 56 million years ago.