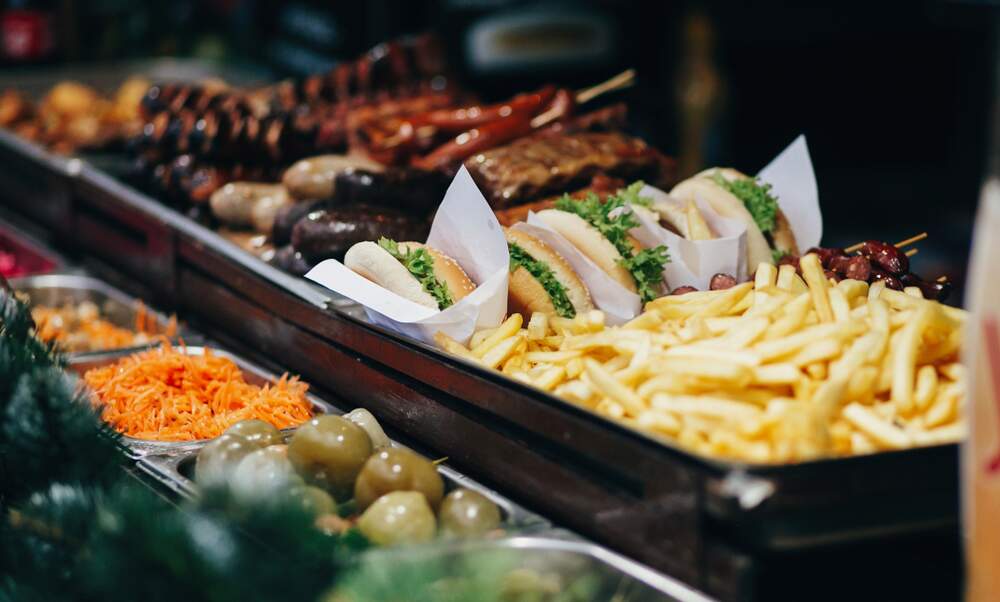 7 German street foods you have to try

7 German street foods you have to try

Although the German kitchen may not be the most refined in the world, what it lacks in sophistication, it certainly makes up for in flavour, variety and execution.

Top 7 German dishes to try on the go

While travelling around Germany, you will likely come across many different types of hearty, tasty and filling traditional dishes and regional specialities. But what kind of dish should you go for after an evening of beer tasting or a spot of sightseeing? Here we share with you our top 7 German street foods you need to try - and where to find them!

We felt it was only right to start with the famous Bratwurst - you can't talk about German food and not mention sausages! The history of this iconic sausage is a bit muddled, but the earliest documented evidence of the Bratwurst in German dates back to 1313, when a council in the Franconian city of Nuremberg stated that only pork loin meat could be used to make the sausage. 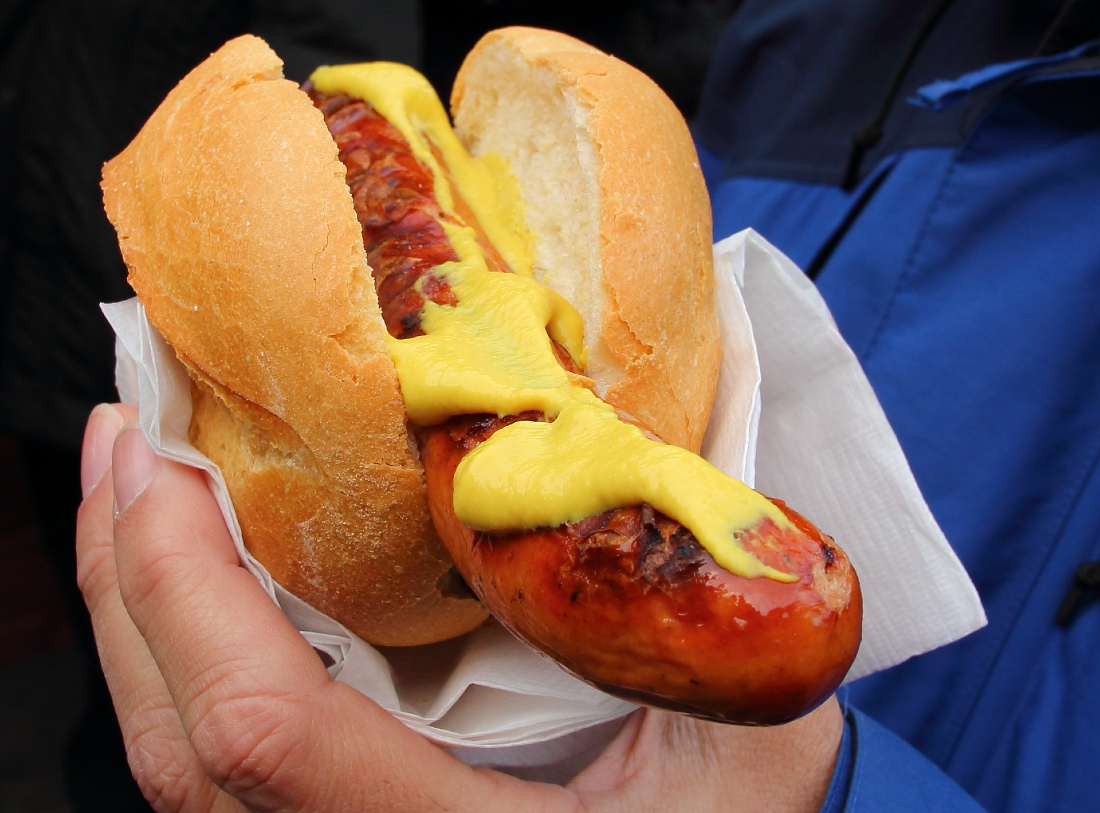 Regardless of how you slice it, Bratwurst is a sausage that is commonly made from pork and veal, mixed with spices like coriander, ginger and nutmeg. It is typically boiled before being fried in a pan or grilled. What sets them apart from other German sausages is their freshness - and the variety! There are over 40 different types of Bratwurst, so be sure to try as many as you can!

You can find different types of Bratwurst all across Germany, but the most convenient, street-friendly way to eat them is in a white bread roll with ketchup and mustard. Head over to Berlin’s oldest beer garden, Prater Garten, to try the traditional Thuringer Rostbratwurst with a nice cold beer or stop by Flesischerei Domke, a butcher’s shop for some of the freshest sausages in Berlin!

The spicy sister to the Bratwurst, the Currywurst is another staple in the German kitchen. The creation of the Currywurst is commonly linked to Berlin resident Herta Heuwer, who is said to have managed to acquire some curry powder and ketchup from British soldiers. History was made the day she mixed the two together and served the resulting sauce over a grilled pork sausage. 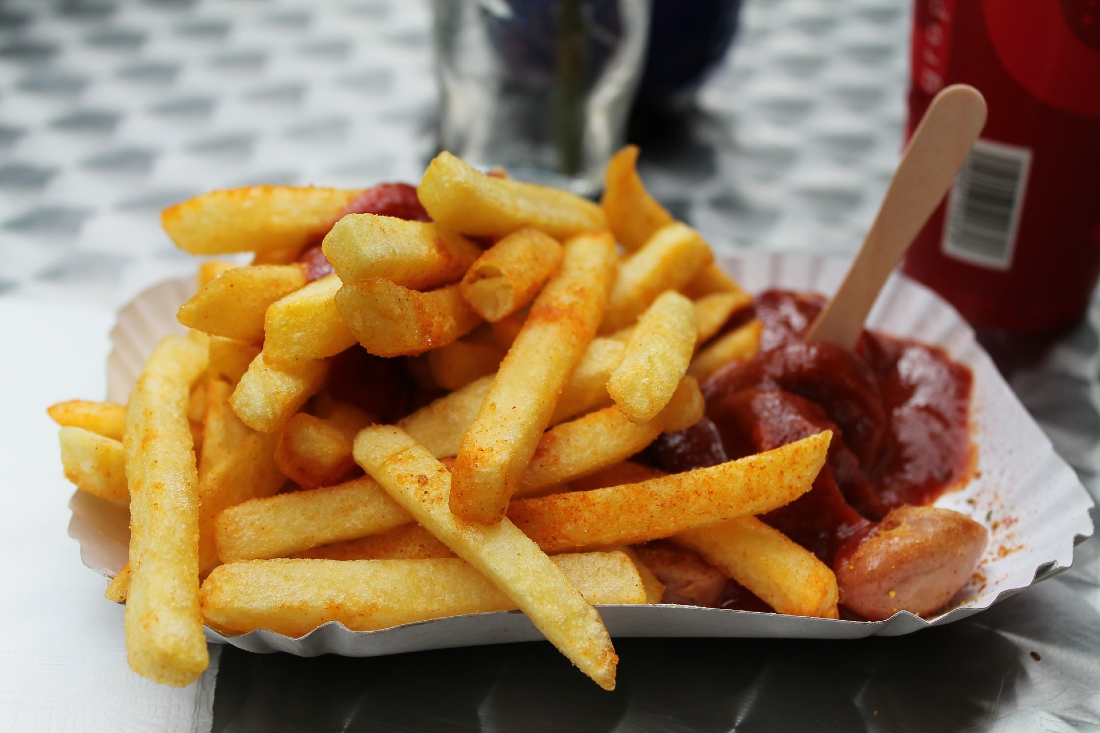 As one of Germany's most beloved snacks (there is even a Currywurst Museum in Berlin!) it comes as no surprise that 800 million of these are consumed a year. But what sets the Currywurst apart from other sausages? It is, quite simply, the special sauce. Served with a white bread roll or fries, it's the ideal snack on a night out washed down with a pint of German beer.

There is a Currywurst stall on every street corner, including the iconic stands like Curry 61, Curry36 and Konnopke’s Imbiss. It's a bone of contention among locals whether Curry 36 on Mehringdamm or Konnopke sells the best Currywurst in Berlin - but we leave it to you to make your own decisions. If you’re looking for a vegetarian option, then Curry61 will be your top pick.

The Germans are well known for their love affair with potatoes, so we could not leave out Kartoffelpuffer (also known as Reibekuchen), the simple but tasty potato pancakes. 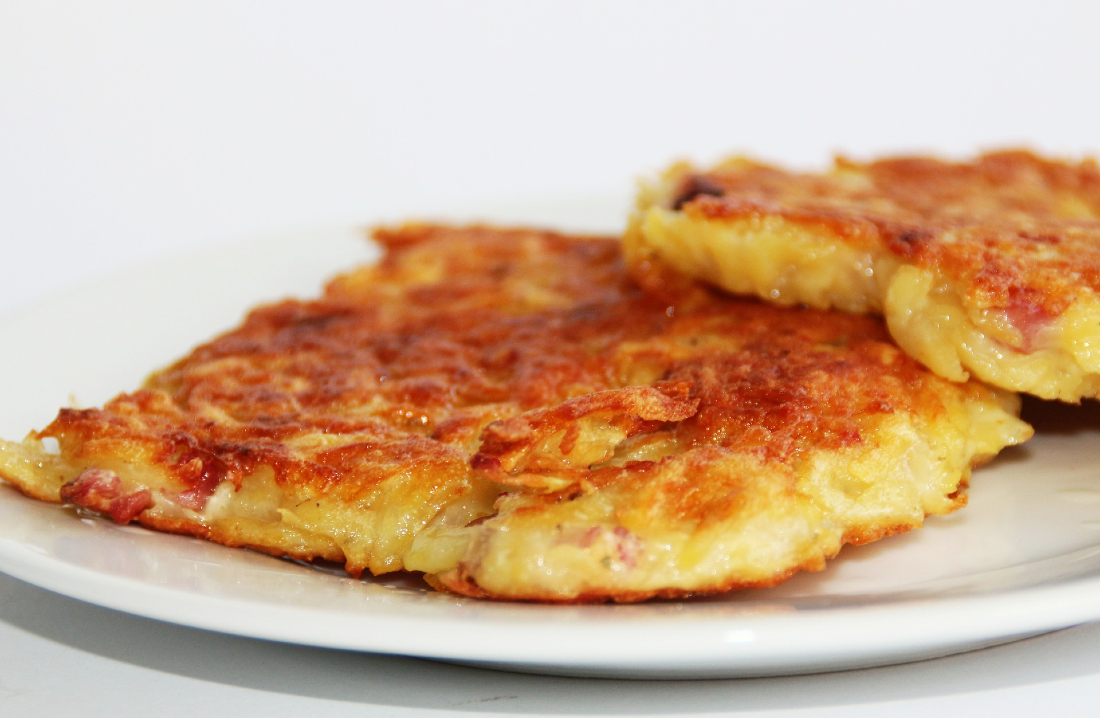 Made from grated or ground potato, flour and egg, the mixture is often flavoured with grated onion, garlic and seasoning. Commonly found in many regions across Germany, as well as Austria, the shallow-fried pancakes can be served as a side dish or the main event, with several sweet and savoury accompaniments, ranging from apple sauce to liverwurst.

Where to try it: Cologne

The best Reibekuchen are always made by hand, and Oma's Küche in the centre of Cologne sells top-class potato pancakes, as the cafe offers the best home-cooked meals. If you're looking to nab some of these treats on the go, then be sure to stop by Reibekuchen Heinz at the Farmer's market by Sudermanplatz on Tuesdays or the market by Apostelnkloster on Fridays.

While this dish is certainly not from Germany (it's technically Turkish) it has been so successfully adapted into German street food culture that there are actually more Turkish Döner kebab stores in Berlin than there are in Istanbul! 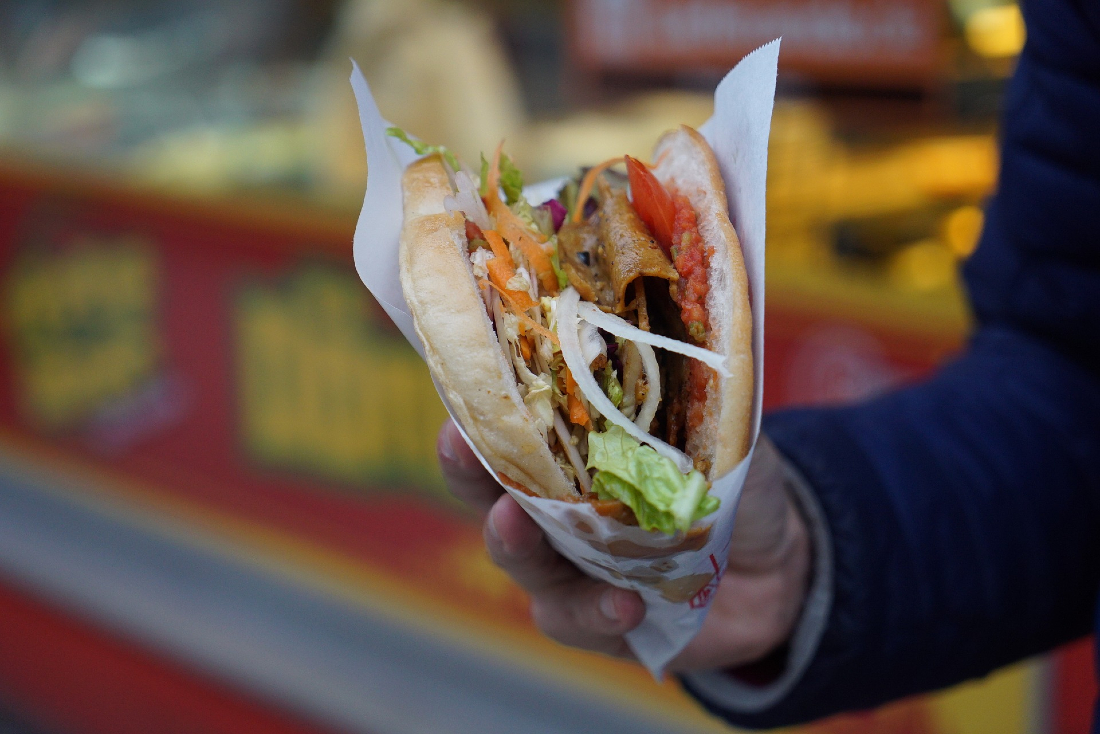 Before the Döner sandwich came along, kebab meat was usually served with rice at dinner-time. However, the radical introduction of a pitta bread, some salad and a yoghurt dressing transformed the Döner into a delicious snack people could eat on the go.

One of the best places to try Döner kebab in Berlin remains the world-famous Mustafa's Gemüsekebap. This legendary stand offers everything from chicken to veggie kebabs for as little as 3 euros. But if you're too hungry to queue for the standard 30 minutes, try out Imren or Tadim, famous among the Turkish population in Berlin for their exceptional meat quality.

Also known as pretzel, Brezels are a type of baked bread made from dough that is commonly shaped into a twisted knot. Brezels are thought to have been invented by European monks in the early Middle Ages and have been a traditional snack in Germany for centuries. 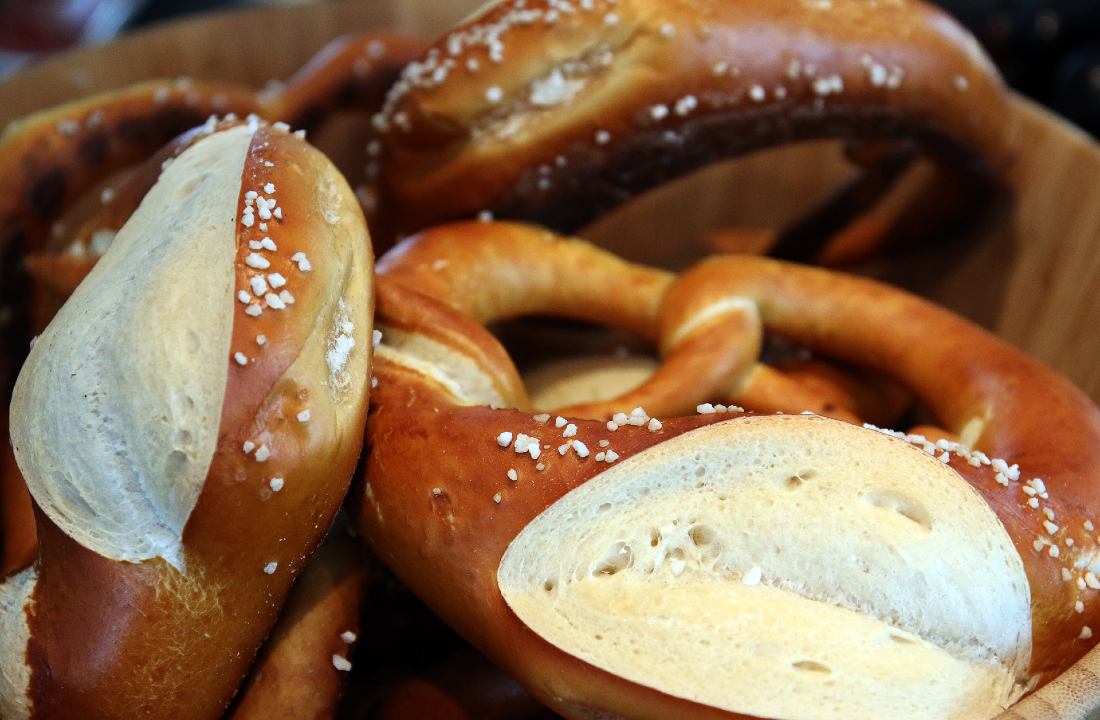 Salt is the most common seasoning, but Brezels come in all shapes, sizes and flavours. One of the most popular Brezel is the Laugenbrezel, or lye pretzel, which gets its characteristic brown colour and crisp from the sodium hydroxide bath it is given before baking. Also worth trying are the Butterbrezel, a sandwich made with Laugenbrezel; the giant Wiesn Brezn, or Käsebrezel, topped with a crispy layer of cheese.

Where to try it: Munich

You can find Brezels in nearly every bakery, cafe and restaurant in Munich, but if you are looking for a truly authentic flavour, then you have to stop by Neulinger bakery. This family-run business prides itself on employing traditional methods, organic ingredients and no aluminium or preservations in their pretzel production. Other popular stops for Brezels include Rischart near Marienplatz, which is actually the most visited bakery in Germany, and Woerner’s.

A traditional dish originally hailing from Alsace, this pizza-like bread is made from dough which has been rolled out into a thin rectangular or oval shape. Traditionally, Flammkuchen was cooked in the oven while it was still too hot for baking bread, but ideal for something thinner! 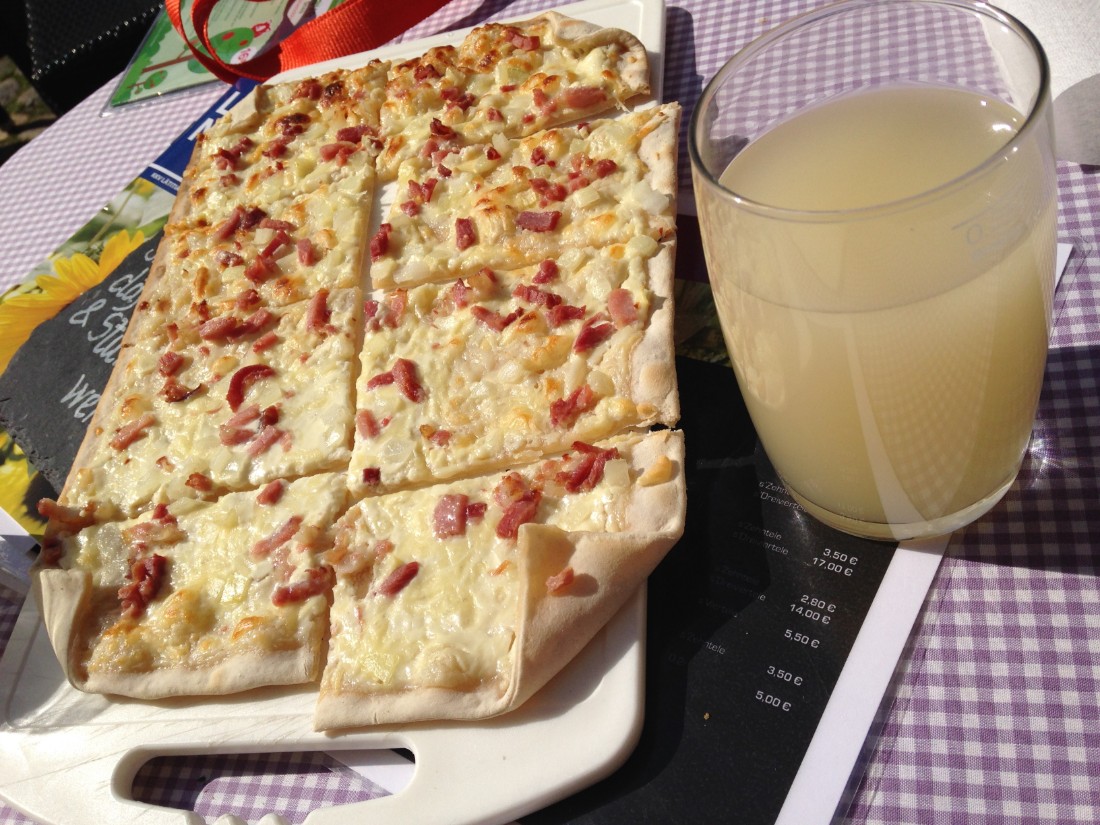 Once rolled out super-thin, the Flammkuchen is then covered in white cheese or crème fraîche, thinly sliced onions and tiny strips of bacon before being baked in a wood-fired oven. It packs a delicious, salty, cheesy punch that can linger on the tongue for hours afterwards and is the ideal dish for sharing between a group of friends.

Where to try it: Stuttgart

If you are looking for an authentic Flammkuchen while visiting Stuttgart, then you have to stop by Carls Brauhaus, a local beer hall and favourite spot among locals and tourists, offers some ‘Super Flammkuchen!’ On-the-go eaters should stop by Martha’s in the city centre, a deli and snack bar that offers some of the best classic Flammkuchen.

What could be so irresistible about a fish sandwich, you may ask? Well for starters, Fischbrötchen, which literally translates to fish sandwich, is made with the freshest fish, often Bismarck herring, but sometimes salmon or rollmops, which is smoked or fried. It is seen as a culinary tradition in Northern Germany due to the region’s closeness to the sea. 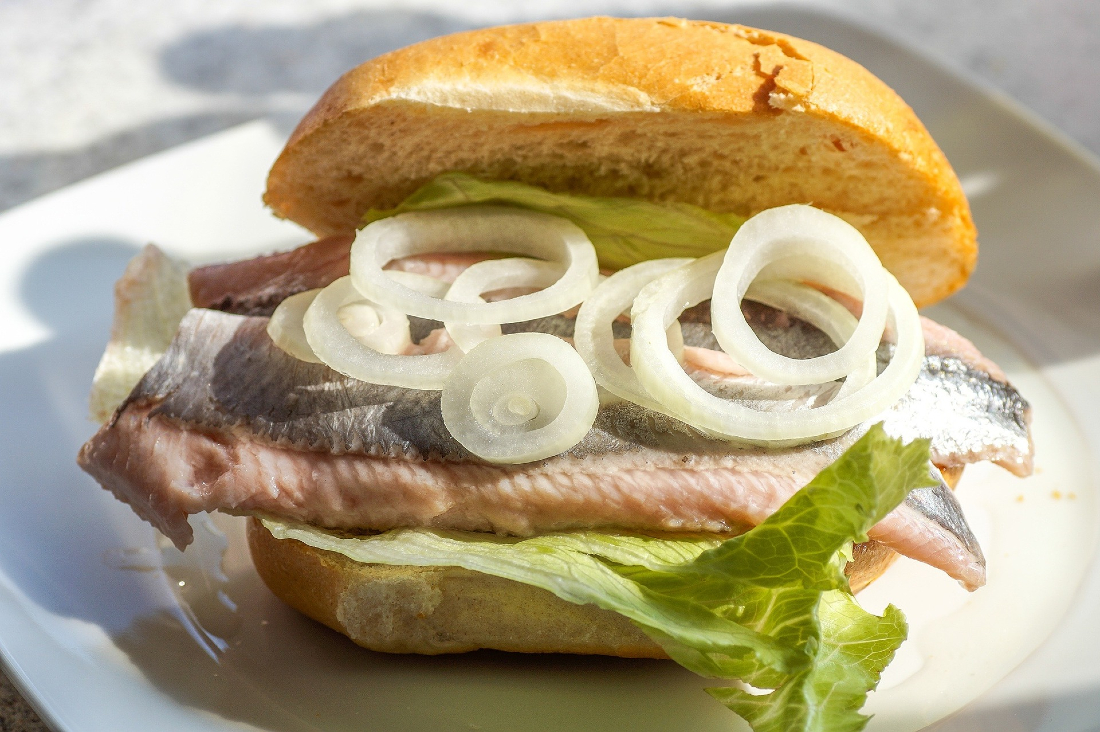 But the fun doesn't stop there: a Fischbrötchen contains many other components as well, such as remoulade, horseradish sauce, ketchup or cocktail sauce, with white onions and pickles. Commonly served as a snack at fast food stands or fish stands, it is a healthier alternative to the ever-popular Döner kebab.

Where to try it: Hamburg

Brücke 10 by Landungsbrücken hands down has the best Fischbrötchen in Hamburg. Offering various types of fish sandwiches, its location by the docks ensures it always has the freshest seafood on the menu. Goedekens Kombüse, a fish stand and deli located just a stone’s throw away from the fish market, also serves up some of the city's most delicious fish sandwiches.

What do you think of our top seven of German street food snacks? Which ones do you think you'll try on your travels through Germany, and which one is your favourite? Let us know in the comments below.