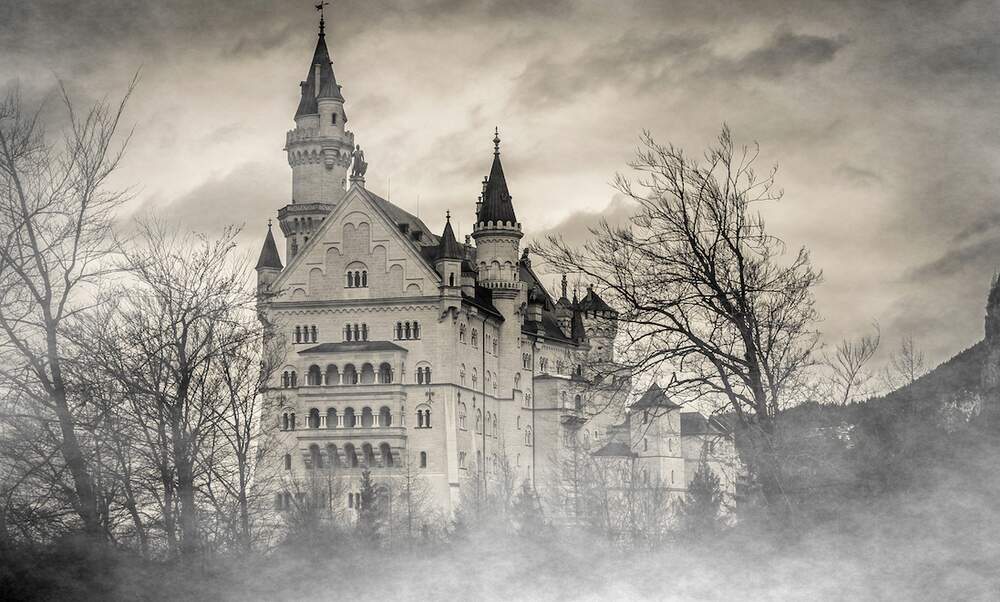 Everyone knows the story of Frankenstein’s Monster, but did you know that its origins lie in a competition and a collection of German ghost stories? The story goes like this: in the summer of 1816, Frankenstein's creator, Mary Shelley, was visiting the famous poet Lord Byron at the Villa Diodati in Switzerland, along with a group of elite writer friends.

But the weather was so terrible that "Year without a Summer" that the group was forced to stay inside. Sitting around a fire, they amused themselves by reading from the Fantasmagoriana (Tales of the Dead), a French anthology of German horror stories. Byron was so inspired (or perhaps spooked!) by the stories that, by the time dawn broke, he had challenged everyone to write their own ghost stories.

The stories the assembled guests came up with would go on to become some of the most iconic and well-known horror stories ever told, including Frankenstein and the Vampyre. So what had the writers so spooked and inspired?

Well, gather round everyone because it's time to listen to some of these frightfully entertaining - and sometimes downright bonkers - tales, full of wonder, intrigue and... ghost barbers?

Stumme Liebe (Dumb Love) is first story of the Fantasmagoriana and tells the story of Franz, an unlucky fellow who has lost his father and family fortune, and has been forced to move to the a most undesirable part of the city of Bremen.

Here he spies a beautiful woman called Meta but, considering his frankly terrifying financial situation, he cannot bring himself to declare his love. (Thus, their love is silent or “dumb”.) In the hopes of raising money, he does what any young lad would do (besides find himself a job) and leaves the city to collect the debts owed to his late father.

On his travels, Franz is forced to take shelter in a haunted castle. During the night, he awakens to a terrible (if not predictable) sight: a ghost standing over him, sharpening razors. The ghost indicates to Franz to sit down, which he does - because why wouldn't you listen to a razor wielding ghost? - and the ghost proceeds to shave all the hair from his head.

The story continues with Franz, in turn, shaving the ghostly figure, in order to free it from a curse (duh!). In return, the spectre tells Franz how to restore his former wealth. The ghost’s instructions lead him to buried treasure and Franz, having regained his fortune, proposes to and marries Meta. Quite a happy ending, for a horror story.

This story is called “The Family Portraits” and follows Count Ferdinand Meltheim as he travels to meet the woman his mother has destined him to marry. He stops at a village, where he joins a group of people who are telling ghost stories to entertain themselves (they didn't have TVs in those days). One girl, Clotilde, recounts a story of how her friend (who turns out to be Ferdinand’s sister) died when a huge portrait of her great-grandmother, Bertha, fell on her.

Ferdinand is shocked. He recounts a similar story about him staying with his friend and his sister, Emily, and their twin brothers. The twins were terrified by a portrait of their ancestor, Ditmar. One night after putting the twins to sleep, Ferdinand noticed the ghostly figure of Ditmar enter the room. He ran to the door and pulled it open in time to see the ghost kiss the two sleeping kids on the cheek. The children died the following day.

Through the discovery of Ditmar’s will it is discovered that Ditmar and his one-time-fiancée Bertha were cursed. Long ago, Ditmar’s rival, Bruno, laid a curse of them after Ditmar attacked and killed Bruno for stealing Bertha from him. If you're lost at this point, you're not alone.

Their ghosts were trapped in family portraits and condemned to murdering family members until the houses of Bruno and Ditmar were united by love. Ferdinand, a descendant of Bruno through Bertha, and Emily, a descendant of Ditmar, married and thus ends the curse.

“The Death’s Head” tells the story of a lead actor named Calzolaro, who has arrived in a town with his troop of performers. He is there to contest the will of his father, who as the town’s schoolmaster, disapproved of Calzolaro’s profession and left his inheritance to a distant female relative (in the 19th century, this was the ultimate burn).

An old colonel named Keilholm invites Calzolaro to perform at his inn to the townspeople. He expresses an interest in ventriloquism and so sends a sexton (a church officer) to fetch a human skull from the graveyard so Calzolaro can “speak” to the dead. We know what you're thinking - this can't possibly end well.

During the performance, Calzolaro uses the point of his sword to lift the skull to talk to it. The audience watches on with delight as Calzolaro screams and appears to faint on the floor. Cries of "Bravo!" and "What an amazing actor!" ring out as they shower him in applause. Calzolaro, who is roused by the applause, screams again and throws the skull straight out the window. He explains to the baffled audience members that, when he held the skull up, it was the face of his father that looked back at him.

Colonel Keilholm hastily finds the sexton, who explains that he used Calzolaro’s father’s actual skull and that he has now been laid to rest. He explains that children who speak to their parents’ skulls hear from them later that night.

Calzolaro does what any sane person who has just seen their dead teacher-father's disembodied face would do: He drops out of the performance troop and becomes a schoolmaster. He also drops his challenge against his father's will and eventually meets his distant relative. Over time, they fall in love and marry (weird), and when Calzolaro takes his new wife by the hands he hears his father’s voice blessing their union (also weird).

This story of the “Death Bride” is told from the point of view of a marquis, who is speaking to friends at a party. He recounts how he was staying with a Count and his two twin daughters Ida and Hildegarde, who were identical apart from a red birthmark on Hildegarde’s neck.

Hildegarde had died the year before and so everyone was surprised when a Duke called Marino arrived to ask her hand in marriage. The Duke told the Count that he remembered seeing her in a Parisian museum, which was odd since Hildegarde had never been to Paris, but he insisted that it must have been her due to her birthmark.

The Count, seemingly unperturbed by some random guy chasing his daughter across Europe, eventually agrees to let Marino marry Ida instead. However the marquis, unbeknownst to the Count, knows that Marino is actually betrothed to someone else. Upon enquiring about his betrothed, Marino tells the marquis that she was unfaithful. However, it is revealed that Marino has forsaken his fiancée for Ida.

Seeking to scare him out of the marriage, the marquis tells Marino the story of Death’s Bride. In the story, a man named Filippo calls upon a spirit to aid him in marrying the beautiful Clara, on the condition that, if he is ever unfaithful, the spirit will have its vengeance. Filippo, in a startling show of stupidity, then falls for another woman called Camilla and they marry. At the wedding, a spirit reveals itself, only to Filippo, who dies in convulsions.

Marino, terrified by the story of Death's bride, confesses his infidelity. However the Count, who is turning out to be quite a bad father, allows the wedding to take place anyway. The ceremony is attended by a masked woman wearing a beautiful gown, who points at Marino and then leaves. The Count runs after her, but she disappears.

Later, at the reception, Ida grows tried of dancing and leaves. However, she quickly returns and takes Marino by the hand to their bed chamber. A few minutes later, Ida re-enters the room, asking for Marino, and the Count confusedly explains that she took him to the bedchamber not 5 minutes before. Upon arriving at the bedchamber, they find Marino’s body, contorted on the floor.

The marquis searches around the town to find out what he can about Death’s Bride. Eventually it is revealed that she was scorned by a lover who then died. When she was to remarry, the spirit of her former lover visited her at the wedding and she died. She is cursed to walk the earth tempting men from their lovers - including the saucy Marino, who was tempted by Hildegarde in Paris.

The story ends with the police entering the party to arrest the marquis. However the marquis escapes and is never seen or heard from again. What seems to be scarier here? The Death Bride? Filippo's stupidity? Or the Count's apparent disregard for his daughter's future happiness by allowing her to marry Marino, the disloyal stalker? You decide.

Halloween is right round the corner! What will you be dressing up as this year? Keep up to date with all sorts of spooky occasions right here on our events page!