When you pay a visit to your local supermarket in Germany, chances are you’re probably not thinking about the farmers and workers who made the food you buy. But just ask yourself this - are they being paid a living wage, are they working in safe conditions – and do they even make enough to eat adequately themselves?

Unfortunately, according to the latest "Supermarket Scorecard" review from Oxfam, five German supermarkets (Aldi Nord, Aldi Süd, Edeka, Lidl and Rewe) are failing to adequately protect the people who produce our food, leaving workers’ rights high and dry on the shelf.

For the second year in a row, the aid organisation investigated the policies from 16 of the largest supermarkets in the US, UK and Europe to find out what they are all doing to ensure basic human rights for their thousands of workers. They ranked each supermarket on four areas, using publicly available information, according to the UN’s Guiding Principles on Human Rights. The ranking factors included transparency; workers' rights; trade and relations with smallholders; and gender equality and women’s rights.

Overall, the German supermarkets examined scored badly, all of them scoring less than 20 percent out of a possible one hundred. This put them firmly in the bottom half of the ranking. Discount chain Aldi Süd ranked best in Germany, with an overall score of 19 percent, but this was still way behind frontrunners from the United Kingdom, Tesco (38 percent) and Sainsbury's (27 percent). Even American giant Walmart ranked better, with an overall score of 23 percent.

That does not mean, however, that German supermarkets have not been improving. Overall, the investigation found that the majority were making progress, but very slowly. Aldi Süd has made the biggest improvement since last year's ranking, increasing its score by an incredible 18 percent after it enacted new policies to tackle human rights violations. However, sister-chain Aldi Nord, failing to follow suit, only improved by 4 percent.

German supermarket Rewe improved its ranking by 12 percent after it published its human rights policy statement and made new policy commitments to ensure the fair treatment of its workers. Lidl improved four percent. Edeka, with a score of one percent, was singled out as the worst performer of all, for the second year in a row, as the company failed to improve its ranking in the slightest.

Where do supermarkets need to do more?

According to Oxfam, women’s rights was the one area with the least amount of progress, highlighting the ongoing gender gap. The four main areas in which supermarkets were encouraged to focus on for immediate improvement include supply chain transparency, gender equality, unfair trading practised and living wages.

Dutch supermarkets Albert Heijn and Jumbo were praised for committing to supply chain transparency by 2020, as well as UK chains Sainsbury’s and Tesco for supporting suppliers who take gender equality seriously.

The full ranking and scores were as follows: 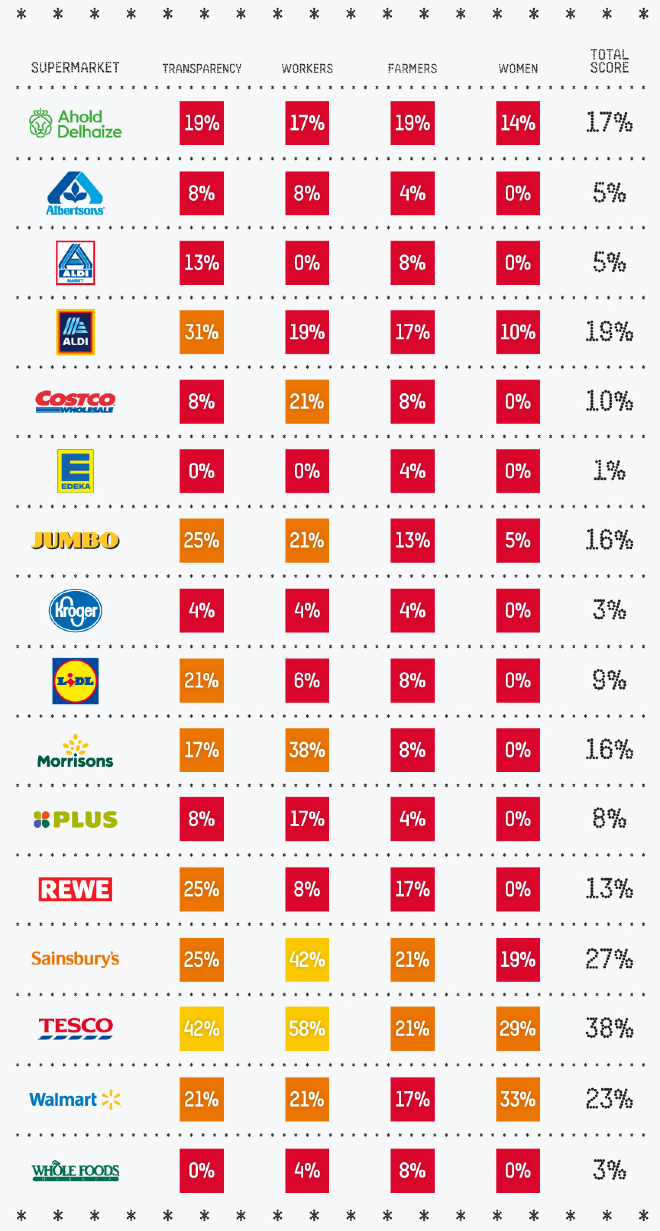 You can find more details about how the scores are calculated on the Oxfam website.