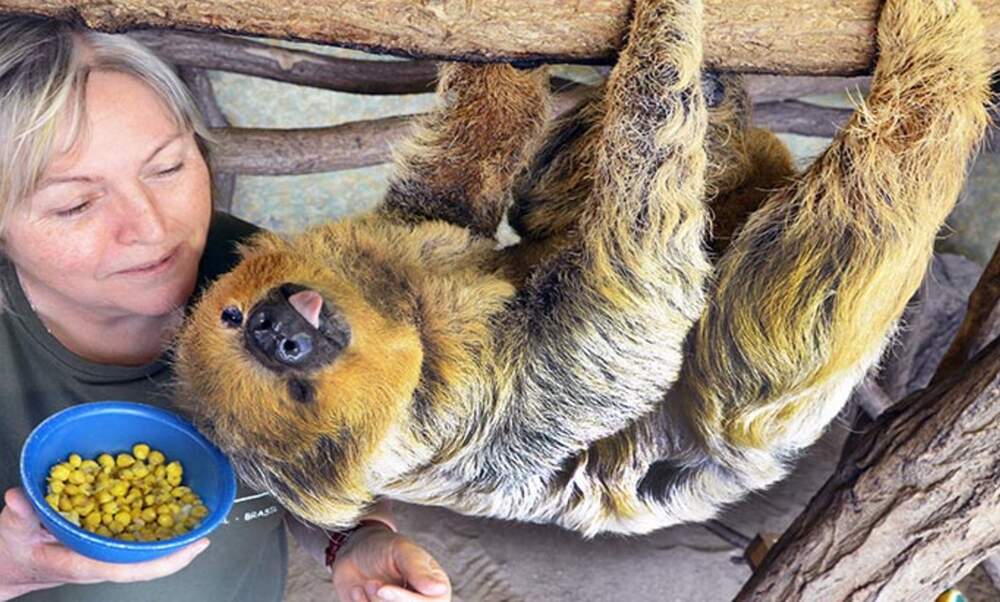 Record-breaking German sloth Paula is the oldest in the world

Record-breaking German sloth Paula is the oldest in the world

Just in time for World Sloth Day! Paula, a 50-year-old sloth from Germany, has just been crowned the oldest of her kind in the whole world.

Paula from Halle oldest two-toed sloth in the world

Celebrations were in order this week at the Bergzoo Halle in Saxony-Anhalt, after its long-term resident Paula snoozed her way into the Guinness Book of Records as the oldest known two-toed sloth in the world.

Jutta Heuer, a former curator at the zoo who has since retired but maintains a close relationship with the sloth, submitted the application on Paula’s behalf. Heuer said, “There is no known specimen in zoos or in the wild that has more years under its belt.” She added that Paula is still quite energetic (in sloth terms) for her age, which she estimates to be the equivalent of at least 90 human years.

Record-breaking sloth arrived in Germany in 1971

Paula is officially classified as a two-toed sloth - sometimes also called a “two-fingered sloth” or Zweifinger-Faultier in German (literally, two-fingered lazy animal). Two-toed sloths are native to the tropical rainforests of Central and South America and spend most of their lives hanging upside down from trees. Their inability to walk forces them to laboriously pull themselves around hand-over-hand. It’s this very slow way of getting about that gives them their name.

Paula has been living at the zoo in Halle since 1971 and already made headlines earlier this year when she celebrated her big 5-0 on June 14 with a plate of cooked maize and vegetables. She was estimated to be around two years old when she arrived in Germany, but for the first 20 years of her life, Paula was thought to be a Paul. It was only after an ultrasound scan in 1995 that keepers discovered she was actually a female - and the reason why their breeding programme had so far not been a success!

According to the Smithsonian Institute, the average lifespan of two-toed sloths is 30 years in captivity and just 20 years in the wild, making Paula’s grand old age an even more remarkable accomplishment. The next-oldest known sloths - 46-year-old Jan and 45-year-old Lulu, also live in Germany, at Krefeld Zoo in North-Rhine Westphalia.