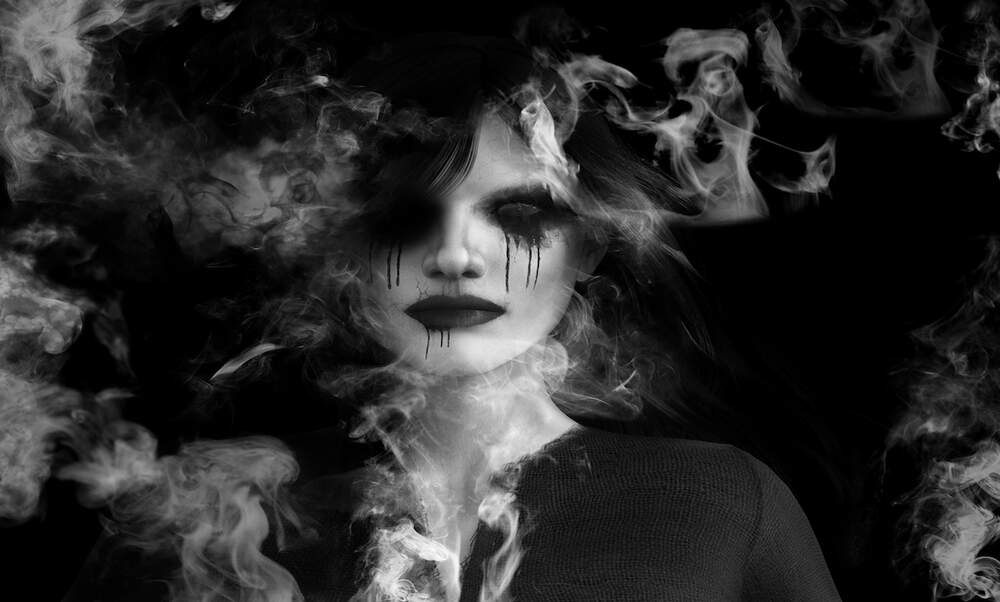 Halloween is getting closer by the day, so get yourself in the mood with a second instalment of the terrifying (sort of) German ghost stories that inspired Mary Shelley's Frankenstein.

The second half of the Fantasmagoriana

In case you need a recap, these spooky stories all come from a book called the Fantasmagoriana, which was read by Lord Byron, Mary Shelley and some other friends during an eerie trip to Switzerland. The tales inspired them to write their own horror stories -  including classics such as Frankenstein’s Monster and The Vampyre.

So, in the spirit of the spooky season, here are four more terrifying tales for you to sink your teeth into!

“The Fated Hour,” begins (rather fittingly) with a ghost story. Two sisters, Maria and Amelia, are visiting their friend Florentina, who tells them about her dead sister Seraphina. Florentina had once seen Seraphina staring out of a window in their home. Following her gaze, Florentina saw what she was looking at: their father holding hands with Seraphina in the garden.

Maria and Amelia gasp; surely this could not be true. Continuing, Florentina tells them she hugged her sister, and when she did the figure walking with their father disappeared. At this point Maria looks on the verge of tears and so Florentina quickly changes the subject.

A few weeks later, Florentina’s father grows ill. He summons Florentina to his room and tells her that he spoke to Seraphina after she disappeared in the garden. He says that Seraphina died “on the ninth hour,” and that she prophesied he too would succumb to the same fate. When the clock strikes nine, Florentina’s father passes away. Before he dies, he warns Florentina never to marry, for Seraphina foretold that Florentina would not live through her wedding night.

But Florentina’s hand has already been promised to a Count. On the day of her marriage, she summons Maria and Amelia to her bridal chamber. She tells them she will die at nine that evening. When the fated hour finally rolls around, the doors to the chamber fly open and Seraphina’s ghost stands in the doorway. Florentina runs to hug her sister and promptly dies on the spot. Not the best end to a wedding party... 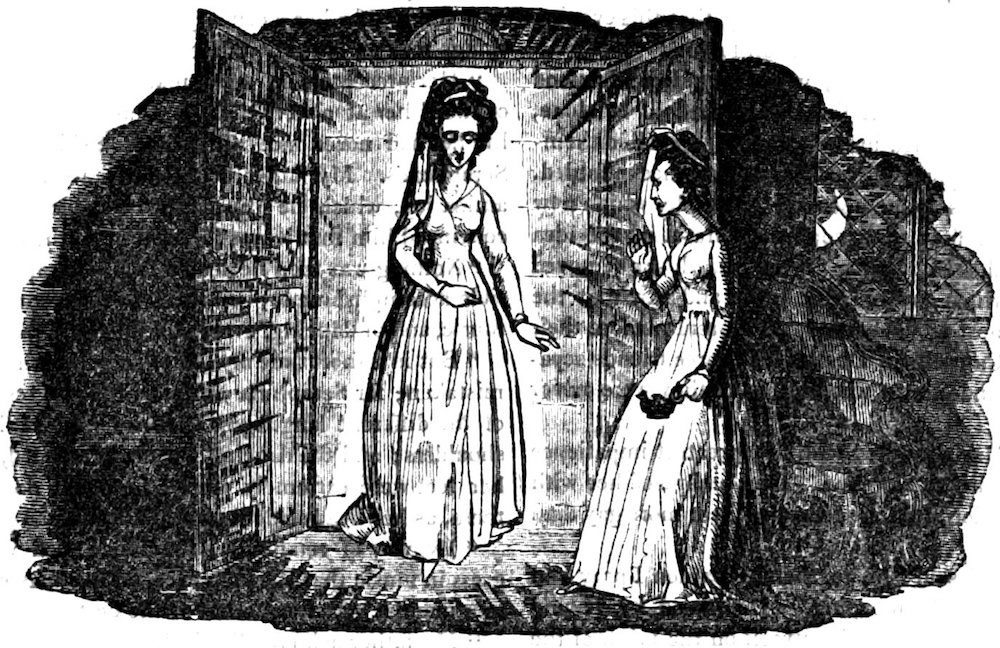 This story is called “The Revenant” and focuses on the sad life of Julien Soller. Julien (who is actually a girl) wants to marry Dr. Gustav Hess, but her father, who has developed the useful ability to see ghosts, refuses. He claims to have seen Gustav’s ghost - and, as everybody knows, if you see the ghost of someone who is alive, then they have a most suspicious character.

Julien convinces her father to let her marry Hess. For a while they are happy but after two failed pregnancies they grow apart. One summer, Gustav travels alone for his summer holidays. Not long after his departure Julien receives two notes, one saying her husband has fallen ill and one telling her husband has died.

One night Julien sees her husband’s figure in her bedroom. Knowing of her father's abilities she is convinced it is Gustav’s ghost and speaks openly about it to friends. The tales of her ghostly encounters are eventually published.

At a social gathering she is approached by a friend of her husband. Herr von Rosen, who is a sensible fellow, attempts to give a reasonable explanation for her ghost stories. He tries to convince her that her husband is alive and the figure she saw was actually him checking on her. He reminds her she has never seen her husband’s dead body.

Julien tells him she only wishes this could be true and despite his reasoned attempts at logic she continues to disbelieve him. That is, until her husband walks out from behind a door to tell her that he is in fact alive (who saw that coming?!) and that he had only left as he needed some time apart and instead of divorcing, he faked his death.

Gustav tells Julien that her outspokenness on seeing his ghost made him realise her devotion to him. He wants to take her away and so they sell off her belongings and move away under a fake name. Weren’t they all dead romantic back then?

The story of “the grey chamber” starts with the Secretary Blendau travelling to Italy with his family. During their journey they pass close by the home of Blendau’s old guardian Ober-Amtmann. Blendau decides to spend a night at his old friend’s house and heads there alone (never a good idea in a horror story).

After catching up with his friend, Amtmann says he is welcome to stay, but he must wait for his wife to return so she can make up his sleeping quarters. A maid mentions that there is a fresh bed in the grey room but Amtmann dismisses the suggestion - the room cannot be used because of the “Damsel of the Castle”.

Blendau realises he had forgotten about the Damsel of the Castle, who had long ago lived there. She intended to take the oath and become a nun. However, she was raped in the grey room by Count Hugo the Black, and for some reason this means that she, rather than the Count, was cursed for 300 years (sure, that seems fair...) The poor Damsel ended up killing herself by drinking poison. Since then, legend has it, her ghost waits in the grey room every night for Hugo to return.

“Bah! Such fairy tales don’t scare me anymore!” exclaims Blendau, as he marches into the grey room, locking the door behind him. He quickly falls asleep but, at midnight, he wakes to the feel of cold drops falling on his face. When he opens his eyes, he sees the Damsel standing over him, a dagger in hand.

Blendau screams and runs for a small door but when he opens it, the skeletal figure of Hugo is standing there. Blendau staggers back and rushes for the bed and throws the covers over his head. Hugo rushes towards the Damsel and then all is silent.

Blendau doesn't dare poke his head out from under the covers until morning. When he sees that the candles in his room, full the night before, have burnt down completely, he realises to his terror that the last night was not a dream. Now Blendau has a dilemma: no one truly believes in the ghost of the Damsel, as no one uses the grey room and so hasn't had the pleasure of seeing her. He knows he will be ridiculed if he tells his story but, on the other hand, he cannot spend another night in the cursed room.

So, he does what any self-respecting man would do: he jumps back on his horse and rides off into the night, back to his family, never to return again.

This story starts with two people discussing the story of the grey chamber (sounds spooky, huh?). One man, a schoolteacher, questions the story, which draws a heated response from August Bärmann, a city doctor.

He believes the tales of the grey chamber, as he has had a similar experience. As a young physician he had to make house calls, and on one occasion he was called to the castle of Lieutenant Colonel of Silberstein, whose daughter suffered from anxiety. They begged him to stay the night in case they might need him again.

Bärmann agreed and was showed to his room, where the walls and furniture were painted black (great interior design). The castle huntsman informed him that the room, “the Black Chamber”, is haunted. Bärmann scoffed at the idea, there were obviously no such things as ghosts. He bade the hunter goodnight and promptly went to sleep.

Bärmann awoke to someone softly calling his name. The room was pitch black but suddenly the lights came on and Bärmann fell, trying to adjust the sudden brightness. He felt a hand touch his arm and he slowly turned his head round. Bärmann was not proud of the loud, high-pitched scream he let out, but he didn’t care; a deathly pale figure was right there in the bed next to him.

Suddenly, the lights went off again and when Bärmann finally got them back on he only found a lock of hair on his pillow. Almost immediately, he was summoned to his patients’ room. The Colonel’s daughter had died.

“Ghosts don’t leave hair on pillows, you…” starts the schoolmaster. However, it is at this point that their friend, Wermuth, steps in. “What are you two gossiping about, then?” The two tell him Bärmann’s story and to their surprise Wermuth offers an explanation.

His friend Tippel, a lawyer, recently had an appointment at Silberstein castle and spent the night in the black chamber. The next morning, he did not emerge from the room and when the door was forced open, they found Tippel unconscious. Once revived, he told them that he heard knocking on the chamber door and, terrified beyond comprehension, he curled up in the fireplace.

He blinked and saw a ghostly woman standing right in front of him, staring up at a cabinet filled with gold and silver. At this point, overcome with terror, Tippel fainted.

The next day the fireplace is examined, and they find a switch that revolves the fireplace into another, larger room. A cabinet stands proudly in the middle, just like the one Tippel described, but empty. The chambermaid is called in to explain but her and the huntsman are nowhere to be found. It seems they had been using the revolving door to steal from the castle and its guests and, just like real ghosts, vanish as soon as they were caught. Naughty, eh?

Halloween is just over a week away! What will you be doing on October 31? Trick or treating? Partying? Or just staying inside with the lights off and the curtains drawn? We hope we haven't spooked you too much!