Whilst the exact number is not known, experts have estimated that Germany is home to over 20.000 castles. From castles that look like they come straight out of a fairy tale to medieval fortresses with moats, Germany features some of Europe’s most impressive castles and palaces. Here are some of the most notable ones, along with a short history of castle-building in Germany.

A brief history of castles in Germany

The earliest castles to appear in Germany were simplistic defensive structures. These so-called motte and bailey castles, consisting of a keep on a raised portion of ground that was enclosed by a protective ditch and wooden palisade, began to be built in earnest in the late 11th century, as a consequence of increasingly frequent Viking raids.

However, the wooden motte and bailey’s critical vulnerability to attack by fire meant that gradually they began to be replaced with stone castles. Burnt down, destroyed, or else rebuilt as more durable stone fortifications, none of these original wooden structures remain today.

With the onset of feudalism came a mania of castle-building, as lords and nobles built private castles (Burgen) to assert control over their territories; not only were these buildings defensive structures, but also grand assertions of power and status.

Over time, as the need to defend their land diminished, rich landowners began primarily to build palaces and manor houses (Schlösser) as places of residence. These buildings were sometimes fortified with defensive structures, but generally had more of an emphasis on comfort and style.

What’s the difference between a Schloss and a Burg?

There are two words for “castle” in German that sometimes seem to be used relatively interchangeably: “Schloss” and “Burg”. Strictly speaking, “Burg” refers to a “true castle” - that is, a defensive fortress, typically built during the Middle Ages. On the other hand, “Schloss” is a generic term for grand buildings, such as palaces, stately homes or chateaus, which were usually built after the Middle Ages as places of residence for the nobility.

To confuse the matter further, in the 15th, 16th and 17th centuries, some castles that had lost their defensive significance were also transformed into places of residences. Therefore, despite being true castles, nowadays they are referred to as “Schlösser” rather than “Burgen”.

Situated atop Mount Hohenzollern in Baden-Württemberg, Hohenzollern Castle offers panoramic views of the Swabian Alps. In the early 11th Century, the first castle was built on this amazing site. However, it was completely destroyed in 1423 after a 10-month siege.

The second castle was constructed from 1454 to 1461. Unfortunately, only the medieval chapel of this castle remains today, as most of its derelict buildings were demolished in the 18th century. Between 1846 and 1867, the third castle was constructed as a family memorial by King Frederick William IV of Prussia. With over 350.000 visitors per year, it is one of Germany’s most-visited castles. 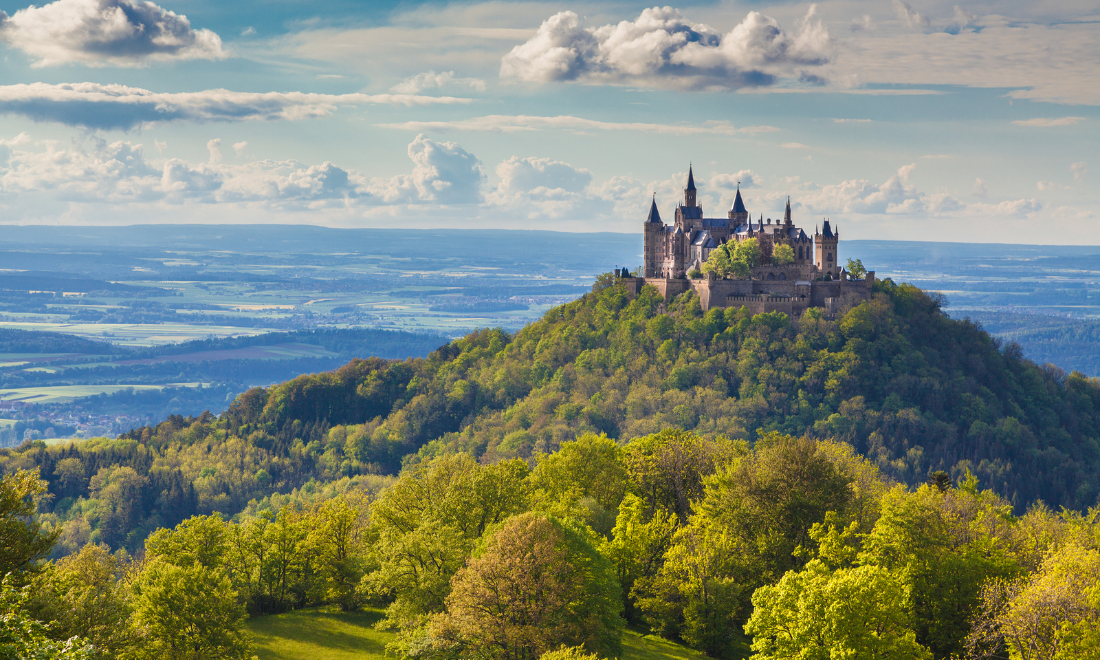 Located on a hill above the village of Hohenschwangau lies Neuschwanstein Castle. This 19th-century Romanesque castle was commissioned by King Ludwig II of Bavaria. However, the king only spent 11 nights at the (largely) unfinished castle, as he died before construction was completed. After his death, the castle was opened to the public.

Today, more than 1,3 million people visit the fairy-tale castle annually. Speaking of fairy tales, it is said that the castle served as the inspiration for Disneyland’s Sleeping Beauty Castle. 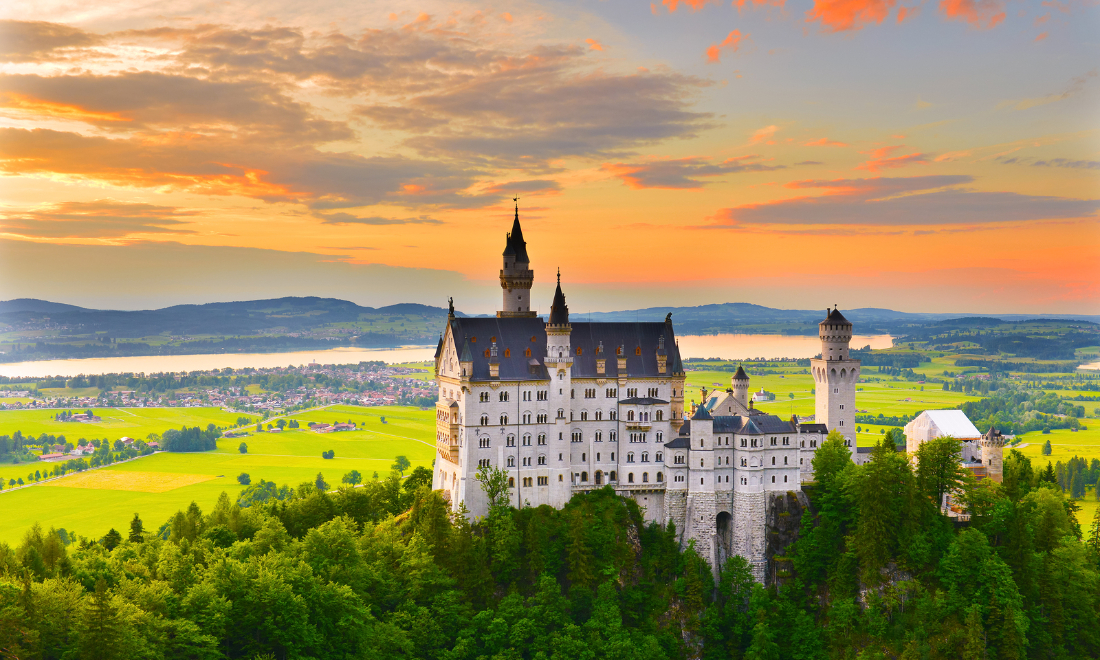 The largest palace complex in Berlin, Charlottenburg Palace has been a favourite retreat of Hohenzollern rulers throughout the centuries. Constructed in the 17th and 18th century, this opulent baroque and rococo palace was severely damaged during the Second World War. Fortunately, the palace was largely rebuilt and refurnished. Today, the palace is one of the most popular tourist attractions in the country’s capital.

Situated in the Swabian Alps in Baden-Württemberg, this privately-owned castle is often referred to as the “fairy-tale castle of Württemberg”. Inspired by the novel “Lichtenstein” (1826) by William Hauff, Lichtenstein Castle was designed by Carl Alexander Heideloff in Gothic Revival style. Construction began in 1840 and was completed in 1842.

You can visit the castle via a guided tour; however, some rooms are closed to the public. Some 500 metres away from Lichtenstein Castle, you can find the ruins of its medieval predecessor, Burg Alt-Lichtenstein. 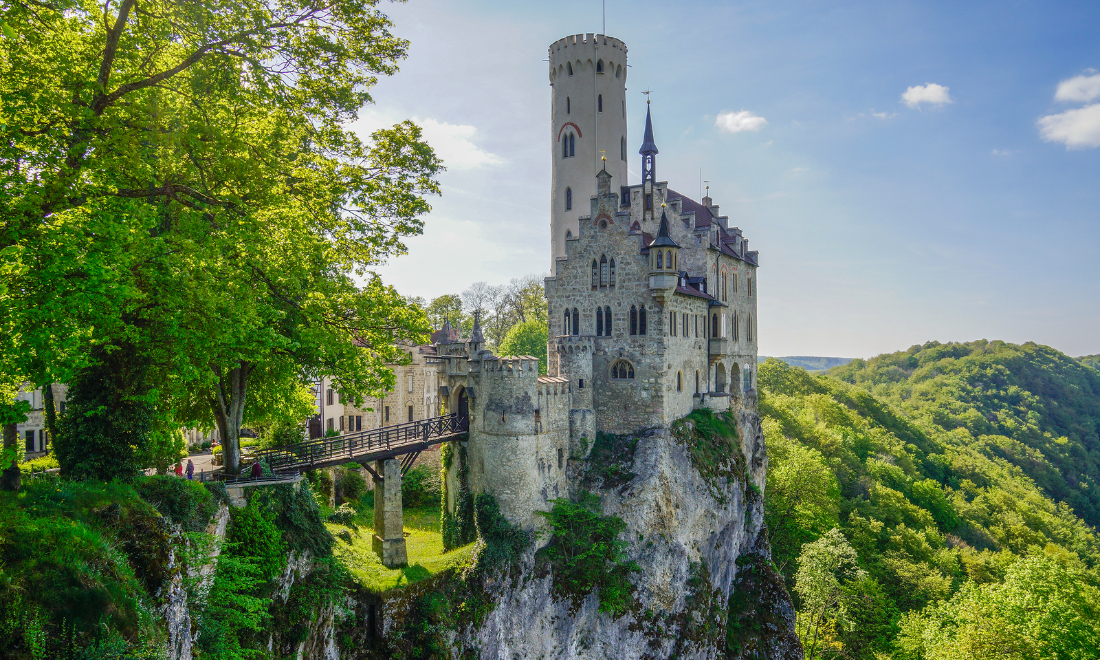 Located on the north side of Köningstuhl hill in Heidelberg, Baden-Württemberg, Heidelberg Castle has a rich history. The first castle structure was constructed before 1225. Over the years, the castle has been destroyed, rebuilt and destroyed again. The ravages of war and forces of nature wreaked havoc on the once magnificent Renaissance building.

It was destroyed in the late 17th century by the French in the War of the Grand Alliance, and in 1764 damaged by lightning strikes and resulting fires. The castle was partially restored in 1890 (main building) and in 1897 (Friedrich Building). However, it was decided that a complete restoration would be impossible. Today, the ruin attracts millions of visitors from around the globe.

Overlooking the German village of Hohenschwangau in Bavaria, Hohenschwangau Castle was first mentioned in historical records dating back to the 12th century. Throughout the centuries, it changed owners multiple times and various wars left the castle in ruins.

However, in 1832 King Maximilian II, father of King Ludwig II, rebuilt the castle according to the original plans. It became the royal family’s official summer and hunting residence. Since Ludwig’s death in 1886, the neo-Gothic castle has remained a favourite with royalty. And not just royalty - over 300.000 people visit the castle annually. 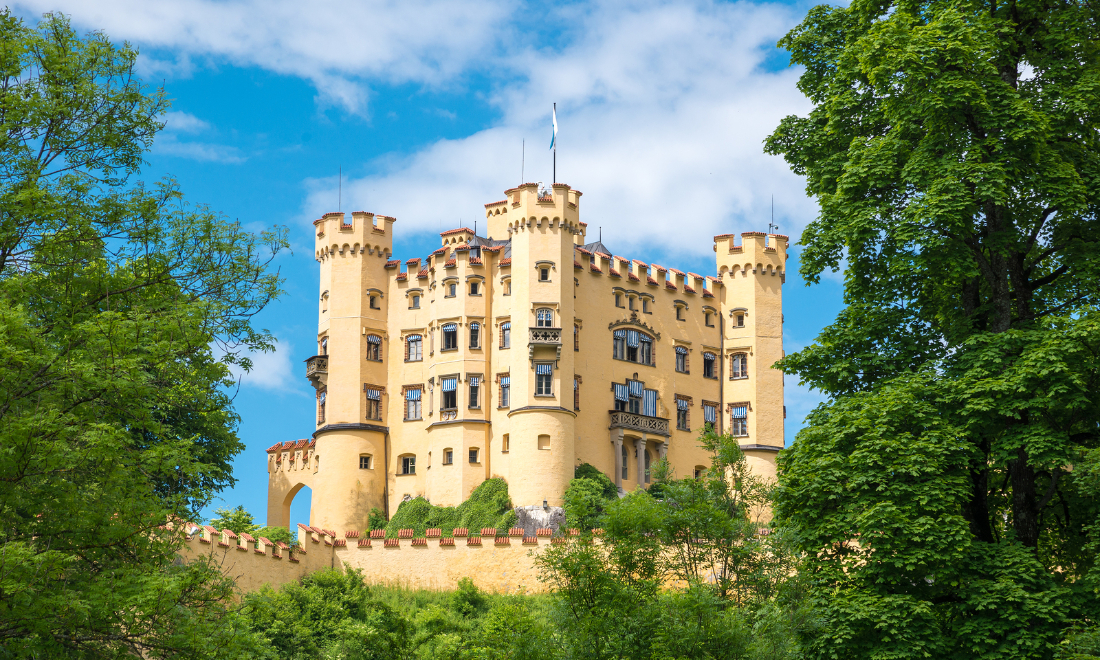 With a history of more than 750 years, it should come as no surprise that Braunfels Castle in Hesse has been rebuilt and extended many times, going from a stronghold to a castle straight out of a fairytale. From 1260, it served as the Solms-Braunfels noble family’s residential castle, and in 1384 became the seat of the Counts of Solms.

Today, the castle is still inhabited by the family; however, it is possible to visit and tour the castle. Be sure to check out the family museum, which features the private collection of the counts and princes of Solms-Braunfels.

Surrounded by Lake Schwerin, Schwerin Castle (often referred to as Schwerin Palace) is located in the German state of Mecklenburg-Vorpommern. Historical records indicate that there has been a castle at this location since the year 973. Of course, as is the case with many old castles, many changes were made over the years.

Today’s Schwerin Castle was built between 1847 and 1857, by Grand Duke Friedrich Franz II of Mecklenburg-Schwerin. The Neo-Renaissance castle was designed by Georg Adolf Demmler, who took inspiration from a French castle, Chateau de Chambord.  After 1918, Schwerin Castle became state-owned. Nowadays, it serves as a seat of government.

On a hill overlooking the town of Altena in North Rhine-Westphalia lies Altena Castle, a medieval castle dating back to the 12th century. It was built by the Counts of Berg to establish their stronghold. Over the years, it has been used as a rest home for the sick, a criminal court and prison, an orphanage and a hospice.

In 1912, Richard Schirrmann set up the world’s first ever youth hostel within the lower floors of the main castle building. The hostel still exists today, but nowadays it is located in the former gatehouse, whilst the Castle Museum is located in the main building.

Boasting stunning views of the Elzbach River and Eltz Forest, Eltz Castle in Rhineland-Palatinate is a sight to behold. Whilst many castles in Germany have been ravaged by wars and nature, Eltz Castle has remained unscathed. Furthermore, it is still owned by the same family that built it 850 years ago, and many original furnishings can still be admired today, making Eltz Castle rather unique.

Make sure you visit the Eltz Castle Armoury and Treasury, as it features magnificent artworks by German gold and silver smiths, ornate jewellery, ceremonial and real weapons, and more. 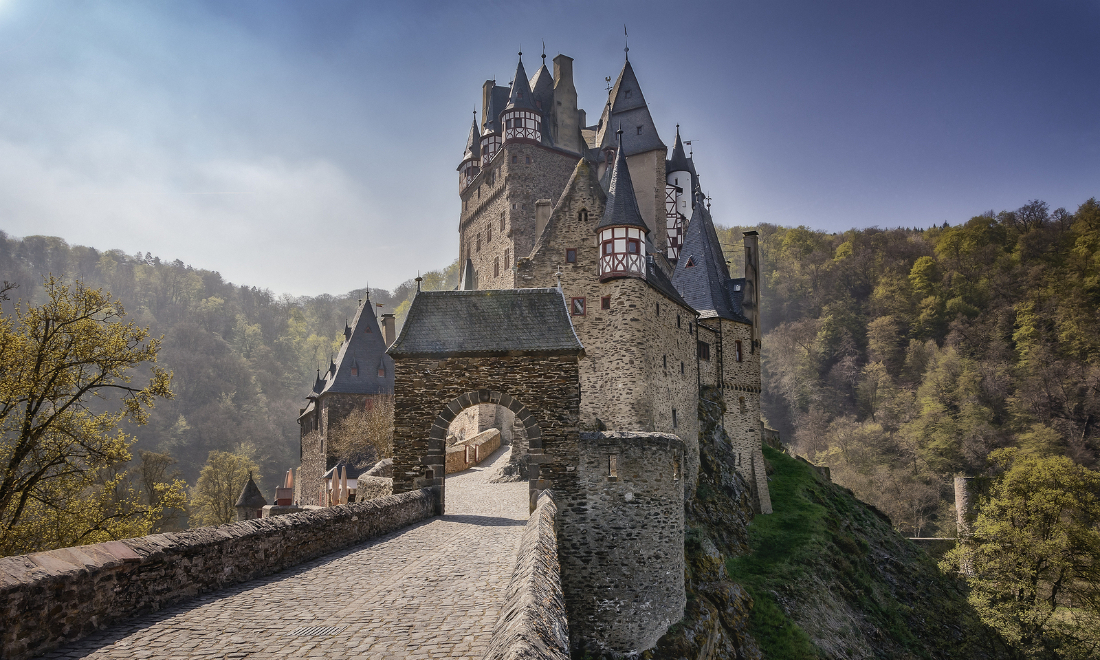 Other castles & palaces in Germany

With over 20.000 castles in Germany alone, unsurprisingly, we couldn’t do justice to them all! Here’s our pick of the best of the rest, divided by federal state.