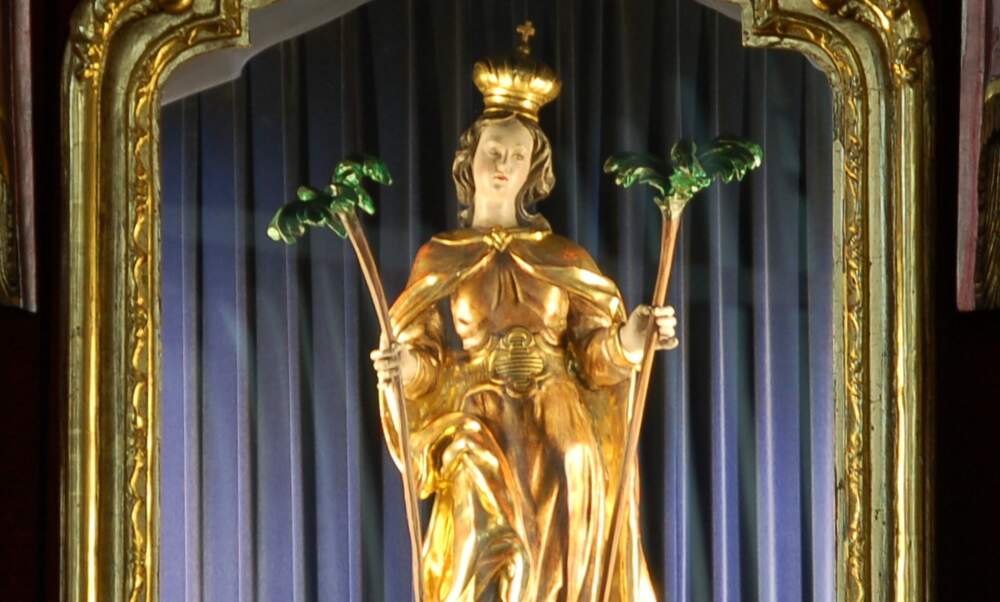 Who was Saint Corona and why are people asking for her help?

Who was Saint Corona and why are people asking for her help?

As we all know, the coronavirus pandemic has forced everyone into their homes, as countries all over the world impose restrictions and, in some cases, lock down completely. Over the past few months, coronavirus has infected around 4,5 million people worldwide and claimed the lives of almost 300.000. It has caused economies to grind to a halt and, understandably, people are desperate for things to get better.

While government-imposed restrictions have helped slow the spread of the virus, scientists all over the world have been racing to produce a vaccine. However recently, there has been a renewed interest in a little-known saint, who many suggest could help out with the current crisis, the aptly named Saint Corona.

The resurge in interest comes at exactly the right time for Aachen Cathedral in Germany. Before the coronavirus outbreak began, the cathedral was already planning on staging an exhibition on gold craftsmanship. The gold, bronze and ivory shrine of Saint Corona, which has been hidden from the public for 25 years and is said to contain her bones, forms part of this exhibit.

Deciding to ride the wave of the ongoing pandemic, and with museums and exhibitions recently allowed to reopen their doors, the Cathedral has decided to bring out the exhibit earlier than planned - and has sparked an interest in the obscure saint. “Like many other saints, Saint Corona may be a source of hope in these difficult times,” said the head of Aachen Cathedral’s relic collection. Even the Diocese of Raleigh in America recently suggested invoking Saint Corona for support.

Many people will not have heard of Saint Corona before. Her story is short and sad and often obscured by the countless, grander stories of more well-known and famous people of the time. So, who is Saint Corona and why are some people suggesting she can offer us support in these troubling times? Let’s take a look at her story and see if her saintly influences could actually benefit us during this global pandemic.

The story of a Christian martyr

The story of Saint Corona, or Saint Stephanie as she is sometimes known, is a sad and gruesome one, and intrinsically linked with another little-known saint, Saint Victor. The story begins with Victor, a Roman soldier of Italian Ancestry, being tortured for being Christian. The persecution of Christians in Roman times saw countless of Christians killed and martyred for their beliefs and refusal to take part in Roman religious ceremonies like sacrifices.

Upon seeing the torture of her fellow Christian, Corona, who was just sixteen years old, publicly confessed her faith and comforted Victor. She was subsequently arrested and interrogated. She was then martyred herself, being tied to two bent palm trees and torn apart as they were released. Most sources agree that Victor and Corona were martyred in Roman Syria during the reign of Marcus Aurelius (161 – 180).

Then, over 800 years later, in the year 997, the Holy Roman Emperor Otto III found Corona’s remains and brought them to Aachen. She was buried at the cathedral, where her grave slab can apparently still be seen today. Her remains were rediscovered in a crypt almost 1.000 years later, in 1910, when the cathedral was undergoing excavation work. Saint Corona’s remains were then transferred into a magnificent shrine.

Can Saint Corona help us with the coronavirus?

Corona and Victor were venerated after their deaths and became saints in the Roman Catholic Church and the Eastern Orthodox Church. Their memorial day is November 24 and their feast day is May 14. According to the Ecumenical Lexicon of Saints, Saint Corona is the patron saint of treasures and butchers; she was also invoked in connection with money and gambling. So, given all that, why on Earth are people calling on her for support during the current coronavirus pandemic?

The most obvious connection to the coronavirus is her name. Despite the similarity, there is no connection between Saint Corona and the name coronavirus. Corona is the Latin name for crown or wreath. This explains why she is also referred to as Stephanie from the Greek, stephanoi, which also means crown.

It is uncertain whether this was actually her name or due to the halo she is portrayed with on becoming a saint. Conversely, according to the German Centre for Infectious Research, the name given to coronavirus by scientists is due to the “characteristic, wreath-shaped appearance of corona viruses.” So, similar names, but not related.

There have also been several publications recently suggesting that Saint Corona was invoked for protection against epidemics. However, this claim has been met with serious doubts from historians. It is believed that her connection with epidemics is probably the result of small towns like Sankt Corona am Wechsel in Austria invoking her protection against storms, crop failures and, most tellingly, animal diseases.

Her patronage of treasure and general positive influence over money has led to some to suggest invoking the saint for financial support during these difficult times.

While Saint Corona doesn’t really have any connection with epidemics, there is no harm in invoking her support, especially if it brings you some comfort and positivity. It is important that we all stay positive in times like these and find small comforts wherever we can.