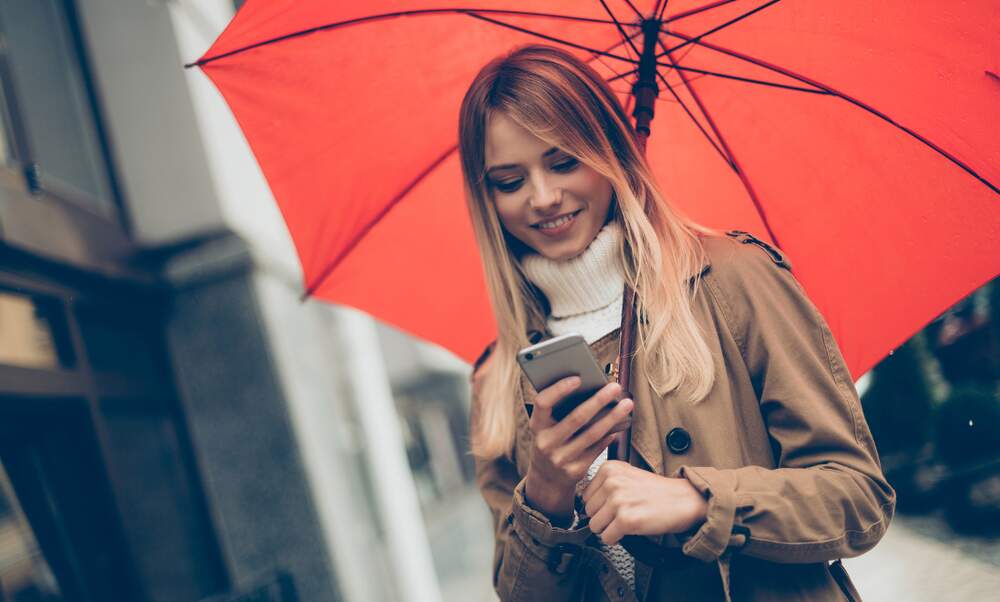 As the old German saying goes: "There's no such thing as bad weather, only inappropriate clothing." But if you’re sick of constantly dressing for a minimum of three seasons to try to keep pace with the famously fickle German weather (sunhat, waterproofs, crampons, you know the drill...) you might be on the lookout for an accurate weather forecast.

If you're new in town and not sure where to start, here's a round-up of the most popular and reliable weather apps in Germany. And if you're still blindly faithful to the pre-installed weather app on your mobile phone (you poor naive soul), maybe it's time to make a change...

If you want an accurate forecast, it makes sense to get it from a source closer to home, right? Not only are these German weather apps more likely to get it right, but they’re usually in German, too - giving you a handy opportunity to practice your language skills.

As the name suggests, this app from the German Weather Service gives warnings for weather hazards of all kinds. The DWD app also offers some of the most accurate forecasts out there, along with zoomable maps and actual and forecast data on precipitation, temperature and wind - but unfortunately only on the paid version of the app, which costs 1,99 euros. Get it for Android or iPhone.

This app scores well on presentation, with its intuitive, easy-to-navigate layout, with hourly updates for the next 24 hours, and weather trends for the following 14 days. The app even has predictions about the pollen count for allergy sufferers and snowfall for winter sport enthusiasts. The free version is accurate enough but you can also upgrade to the pro version for 6,99 euros. Get it for Android or iPhone.

This app is notable for its handy “rain radar” (Niederschlagsradar), which can predict when the rain will stop and start, helping you determine the perfect moment to take the dog out for a walk. In a test of multiple weather apps, consumer organisation Stiftung Warentest graded it highly for the accuracy of its predictions. Get it for Android or iPhone.

Reliance on DWD data means that Wetter.com can’t be faulted on its reliability. It also has a snazzy cloud cover radar and, with 16 days forecast, one of the longest ranges of any German weather app. However, free users have to reckon with an onslaught of advertising in the form of full-page pop-ups. The pro, advertising-free version costs 5,99 euros per year. Get it for Android or iPhone.

While a German weather app may be the best thing for accurate predictions in Germany, if you’re someone who frequently ventures further afield, you might get more out of a weather app with world coverage.

Accuweather is well-known worldwide and is just as accurate in Germany. As well as detailed hourly, daily and weekly forecasts, it also features a useful “RealFeel” index which, as the name suggests, gives you an idea of what the temperature outside actually feels like. Get it for Android or iPhone.

This weather app from Yahoo won the Apple Design Award back in 2013, and it’s easy to see why: striking Flickr photos of your current location and weather conditions provide a minimalist backdrop that can be expanded to reveal more detailed information about temperature, wind, precipitation and a 10-day forecast. Not only is it accurate, but it’s got to be the most aesthetically pleasing weather app out there. Get it for Android or iPhone.

An old-time classic, the Weather Channel provides 36-hour and 10-day forecasts, with details on wind speeds, humidity, the UV index and visibility. You have the option to remove ads for 99 cents a month or 9,99 euros per year. Get it for Android or iPhone.

This app provides seven-day forecasts, updated every three hours, for more than two million locations worldwide. As well as data on temperature, wind, air pressure, precipitation, humidity, UV index and “feels like” temperatures, the app provides worldwide alerts and warning levels for extreme weather. Blessedly, there are also no adverts. Get it for Android or iPhone.

Get an accurate weather forecast in Germany

With a couple of these on your phone (or maybe all eight if you want a second, third and fourth opinion), you're sure to have a good idea of what to expect, whatever the weather. Good luck braving the elements!