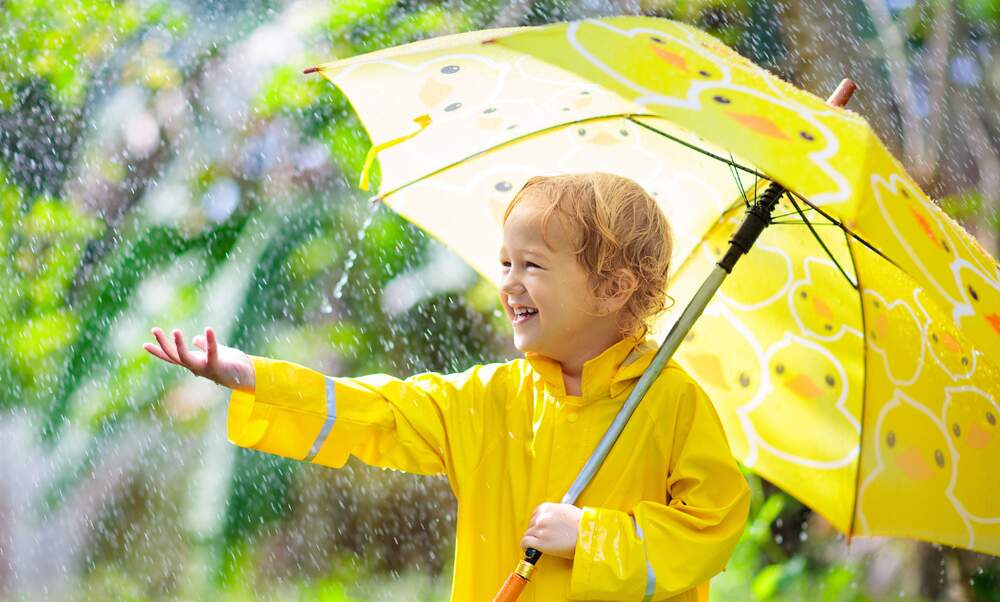 If you’ve been in Germany a while, chances are you’ll have heard someone complain about the weather. First it’s too hot, then it’s too cold, then it’s far too much in the middle. But is the German weather really that changeable? What’s the temperature like for each of the seasons in Germany and is it true that summers are the rainiest? We’ve put together everything you need to know about the weather in Germany!

Despite its northerly latitude, Germany primarily has a temperate seasonal climate, moderated by the North Atlantic Drift. This enables its population to enjoy warm summers and relatively mild winters. With no consistent dry season, rain falls throughout the year in Germany, and the summer months are some of the wettest.

Germany’s large land mass and topographical variations mean that distinction can be made between its various regional climates:

Due to their proximity to the Baltic coast, Germany’s north and northwestern regions have an oceanic climate with warm summers and mild winters. While these regions are spared from temperature extremes, they do experience high humidity and heavy rainfall. Winds from Scandinavia also mean that winters in the north tend to be chilly.

As you move further away from the sea, the climate in the east of Germany becomes more continental, bringing with it extreme temperatures in summer and winter. Winter temperatures decrease steadily the further east you move; eastern Germany also tends to be drier than the rest of the country.

Central and southern Germany are transition regions which vary from moderately oceanic to contintental. Generally, the southeastern regions receive the most extreme temperatures, and often are the hottest in summer and the coldest in winter.

The climate in Germany’s Alpine and mountainous region is wetter and cooler, with some slopes receiving the highest annual precipitation in the country.

Although a temperate, mild climate, the German weather does vary significantly between the seasons (and often within the seasons themselves!)

Meteorologists may define spring as the months of March, April and May, but in Germany it can be fickle. While the sunshine can break through as early as the end of February, it’s not unusual to have flurries of snow as late as April - still way after the astronomical start of spring on March 20. Best to wear layers.

The average temperature in spring in Germany is 7,6 degrees celsius, ranging from a chilly average of 3,8 degrees in March to 12 degrees in May. An average of 59,7mm of precipitation falls each month in Germany during spring, with 10,5 days having more than 1mm, and the sun shines for an average of 5,3 hours per day.

The coldest spring ever took place way back in 1785, when the mean temperature couldn’t struggle above 4,0 degrees. Multiple chilly springs were recorded between the mid-1830s and the mid-1850s, with the years 1845, 1853 and 1837 being particularly cold.

Astronomical summer begins on June 21, whereas meteorologically it is counted as the months of June, July and August. While summers in Germany are generally warm and sunny, especially in the south, they are also the months with the highest average precipitation, so don’t forget your umbrella.

On average, temperatures in summer in Germany reach a balmy 16,4 degrees. July and August tend to be the hottest months with an average temperature of 17 and 16,9 degrees, respectively. The sun shines for an average of seven hours per day but expect some thundery showers, too: the average rainfall is a whopping 76,8mm per month.

The coldest summer ever recorded in Germany was in 1816, when it only reached a chilly 14,1 degrees on average. The unusual weather during this “year without a summer” was probably caused by dust particles released during the eruption of the Tambora volcano on Java in Indonesia. With ground frosts lingering until late in the spring and returning early in the autumn, crops were damaged and the harvest in Germany was particularly poor.

Autumn, which begins astronomically on September 23, can be a mixed bag weatherwise. September usually has plenty of clear, sunny days, ablaze with colourful autumn foliage. By October and November the shorter, colder and greyer days start to settle in.

With an average temperature of 8,3 degrees, autumn in Germany is significantly colder than summer, although temperatures of up to 30 degrees in September are not unheard of. With a monthly average of 58,6 millimetres of precipitation, it’s the second-driest season and the second-cloudiest, with 3,6 hours of sunshine per day, on average.

With temperatures often dropping below zero, it’s time to bundle up when winter arrives in Germany. Although you might find yourself throwing off your hat and gloves in surprise: with a range of more than 10 degrees, winters in Germany experience much greater temperature fluctuations than other seasons.

On average, it reaches a mean of 0,4 degrees during winter in Germany. Up until around 1890, the average winter temperature was a cool -0,8 degrees, but winter temperatures have increased significantly in the last 25 years. While it can snow heavily in Germany, especially in the southern regions, it’s actually the driest season in Germany, with an average monthly precipitation of 53,4 millimetres - and with a measly 1,9 hours of sunshine per day, it’s the dreariest.

Coming it a mean -6,6 degrees, the winter of 1829 / 30 was the coldest ever recorded in Germany. The winters around the Second World War were also bitterly cold, all recording average temperatures around the -5-degree mark. The second-coldest winter came 200 years later in 1962 / 63. It was apparently so cold that winter that the sea froze in places!

The warmest German winter ever was in 2006 / 7, with an average temperature of 4,4 degrees. This must have been a warm decade - all of the warmest seasons ever recorded in Germany took place between 2001 and 2010. Since 2009, only one winter (2010) has recorded a sub-zero average temperature.

How often does it rain in Germany?

Generally speaking, and in a worldwide or even Europe-wide comparison, it doesn’t rain that much in Germany. The average annual rainfall in Germany is only around 700mm. Compare that with the 3.240 mm in Colombia or Indonesia’s 2.702mm. Even within Europe, Germany doesn’t compare badly. Countries such as Switzerland (1.537 mm), Albania (1.485 mm) and the United Kingdom (1.220 mm) are all far rainier than Germany.

Perhaps Germany’s main problem is that its sunnier months tend to be some of the wettest, with summer experiencing the highest average rainfall of all of the seasons. Added to that, the weather can be somewhat unpredictable here. A hot sunny day can quickly boil over into a violent thunderstorm.

If you want to avoid the rain as much as possible, steer clear of the west of the country. While Oldenburg in Lower Saxony has the highest annual precipitation (1.072 mm) in the whole country, the second, third, fourth and fifth rainiest cities in Germany are all in North-Rhine Westphalia.

How often does the sun shine in Germany?

The coldest temperature ever recorded in Germany was on December 24, 2001, when it hit an incredible -45,9 degrees at the Funtensee measuring station in the Berchtesgaden National Park in Bavaria. With an elevation of 1601 m, this lake is known as the “coldest spot in Germany”.

In Germany a “heat day” (Hitzetag) is classified as a day where the temperature exceeds 30 degrees. Germans talk about a “heatwave” (Hitzewelle), when three heat days follow one after the other. The longest heatwave in German history took place in July 2006, when 19 “heat days” in a row were recorded in Freiburg, with an average maximum temperature of 36,5 degrees.

The hottest day in Germany ever

The hottest day ever recorded in Germany was on July 25, 2019, when a measuring station in Lingen in Lower Saxony recorded a sweltering 42,6 degrees. There are, however, some suggestions that this reading might be a mistake as it diverges wildly from readings at nearby stations. On the same day, 41,2 degrees was recorded at Duisburg & Tönisvorst in North-Rhine Westphalia.

The German Weather Service (Deutscher Wetterdienst - DWD), is the German Meteorological Service, responsible for monitoring weather and meteorological conditions over Germany. Its key responsibilities include national weather forecasting, issuing weather warnings and monitoring climate change. It also manages the national climate archive. It was founded in 1952 after the merger of the weather services in western occupied zones and is currently based in Offenbach am Main.

Since the weather in Germany can rarely make its mind up, it’s handy to have a one or two weather apps up your sleeve to check conditions before you head out for the day. Home-grown apps that are popular in Germany include WetterOnline, Wetter von t-online.de and Wetter.com. Well-known international companies such as Accuweather and The Weather Channel also provide accurate forecasts for Germany.