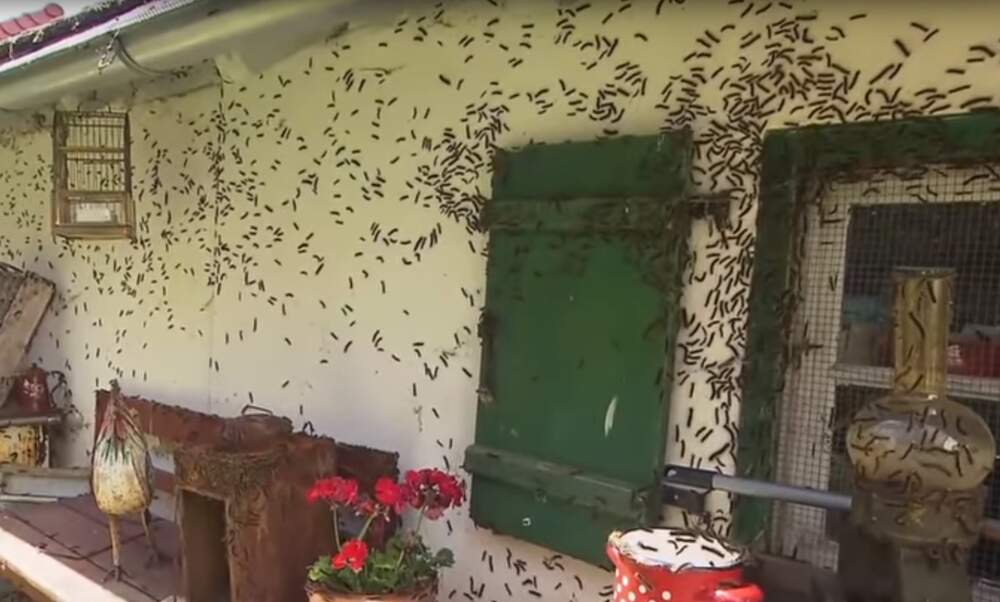 It’s the stuff of nightmares: millions of wiggling, black, hairy creepy crawlies, up to seven centimetres in length. They’re in gardens, blanketing the walls of houses, and are even invading the local outdoor swimming pool. It’s gypsy moth caterpillar season in Gunzenhausen, and this year’s population has positively exploded.

Gypsy moth (Lymantria dispar) are native to Burgstallwald forest area in Bavaria. They tend to proliferate especially after warm, dry weather in the early summer, and their presence is not only irritating for humans, but can have a devastating impact on local ecosystems. The hungry caterpillars sometimes strip the oak forest so bare that the trees, which rely on their leaves for photosynthesis, die off.

This plague of caterpillars has already munched its way through 117 hectares of forestland and has now started on the nearby town. The facades of houses close to the forest are positively crawling with the caterpillars, and local residents have been brought to their wits’ end trying to remove them. Armed with brooms and vacuum cleaners, their efforts have mostly proved futile, meaning that emergency pest controllers have now had to be called.

Pesticide use to blame for outbreak

The reason for this year’s outbreak seems to be a city council resolution to abandon chemical insect control. The state forest enterprise, which owns around two-thirds of the Burgstallwald, decided against using pesticides this year. For obvious reasons, they are now considering re-introducing them for the coming year. In some areas of Central and Lower Franconia, an air-borne poison has already been sprayed over infested forest areas.

Gypsy moths do have a number of natural predators, including Tachinid flies and Braconid wasps, who could also help control the mass proliferation. The use of pesticides to control the population of pests tends to create a vicious circle effect: in killing off the pest, you tend to kill off their major predators as well by denying them their primary food source.

Once the pesticide is removed, the population of plant pests tend to recover much more quickly than that of their predators. This means that the resulting pest infestation is often worse than it was before the pesticide was introduced.