9 of the most exquisite libraries across Europe

9 of the most exquisite libraries across Europe

Who doesn’t love a good library? They’re a great place to broaden your horizons, learn new things, get some work done, or meet up with friends for a coffee and a slice of cake. Libraries have been integral to society for centuries, and so Europe is blessed with hundreds of breathtakingly beautiful libraries that date back hundreds of years. But don’t overlook the modern takes on the classic institution.

When travelling and visiting new places, you might not think to visit a city’s local library - but that’s where you’re missing out! Or, as an avid reader and bookworm, why not plan a European tour, visiting the continent’s hidden gems and most iconic book repositories. But where to start? With our list, of course!

The most beautiful library in Europe

There are so many to choose from, but here’s a quick rundown of the most beautiful libraries that can be found right here in Europe.

Housing over 10,9 million books and artefacts, the Austrian National Library is, perhaps unsurprisingly, the largest library in Austria. First established in 1368 as the Imperial Court Library, the site was expanded and developed in the early and mid 18th century as the State Hall - the largest Baroque library in Europe - was built. Here, you’ll find two Venetian baroque globes, as well as a number of marble statues, and all of the library's (domed) ceilings and walls are beautifully decorated with frescoes by the painter Daniel Gran. 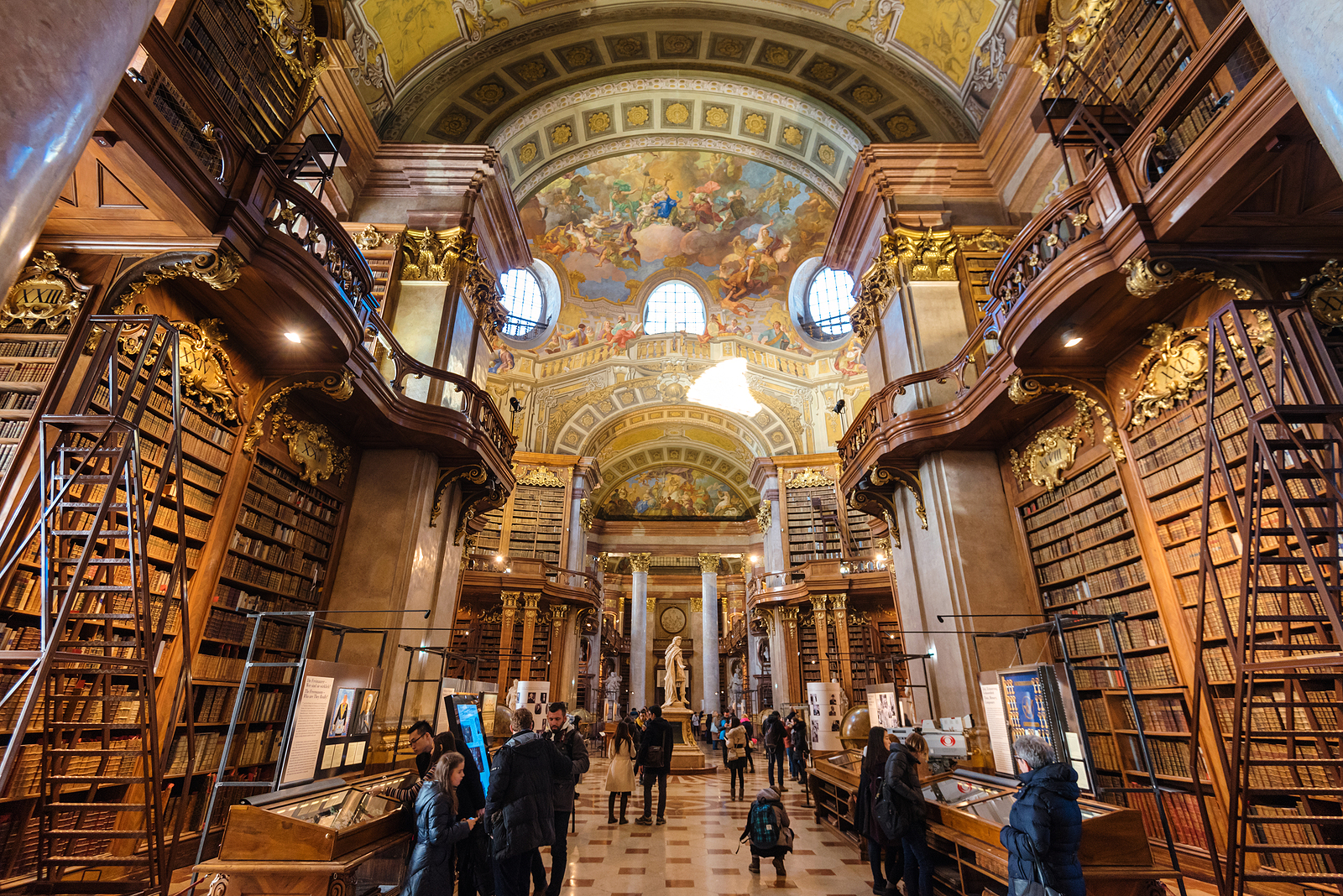 Oxford’s Bodleian Library might be the more iconic library, but that doesn’t mean the Codrington Library isn’t beautiful in its own right. Now known as the Library at All Souls College, this academic library was established over 250 years ago and is a Grade I listed building. Home to around 185.000 items - about a third of which are pre-1800 - the collection comprises mostly law, European history, ecclesiastical history, military history and classic texts.

Found at the historical residence of the King of Spain in the small town of San Lorenzo de El Escorial about 45 kilometres away from Madrid, the Royal Library at El Escorial was founded by King Phillip II in the 16th century and houses a rare collection of 4.700 manuscripts and 40.000 printed books. It was the first library in the world to display books on shelves, but what really stands out about El Escorial are the frescoes on the walls and ceilings.

The first modern member of this list, Helsinki’s Central Library only opened its doors in December 2018. One of Helsinki City Library’s 37 sites, Oodi is so much more than just a space to look at books - each floor has a different character and style, providing space for people to sit and work in silence or gather together to discuss ideas. The building also houses work and event spaces, exhibition spaces, areas for children and families, and a gorgeous sunny terrace on the roof. 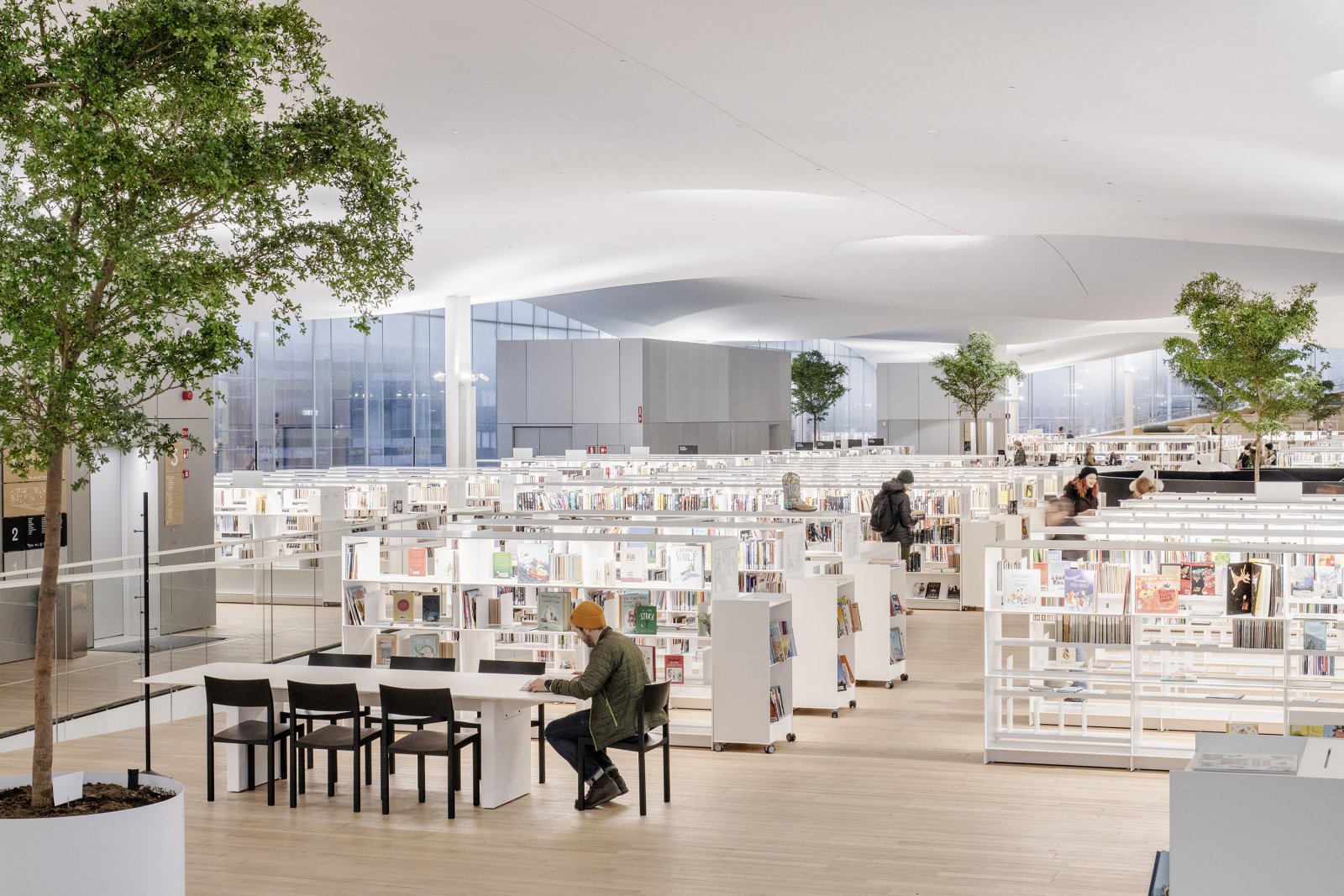 The National Library of France

Visiting the National Library of France could take a while, as it is spread across five sites throughout Paris, and is one of the largest libraries in the world. While each of the sites is beautiful in its own right, the Frances Mitterrand Library and the Richelieu Library are real highlights. Frances Mitterrand offers visitors a more modern vibe, located on a square with four towers shaped like open books on each corner, while Richelieu has a more historical feel, with the main attraction being the Labrouste Reading Room. Planning on doing a library tour of Paris? Why not check out the Saint Genevive Library in the fifth arrondissement - it’s breathtaking! 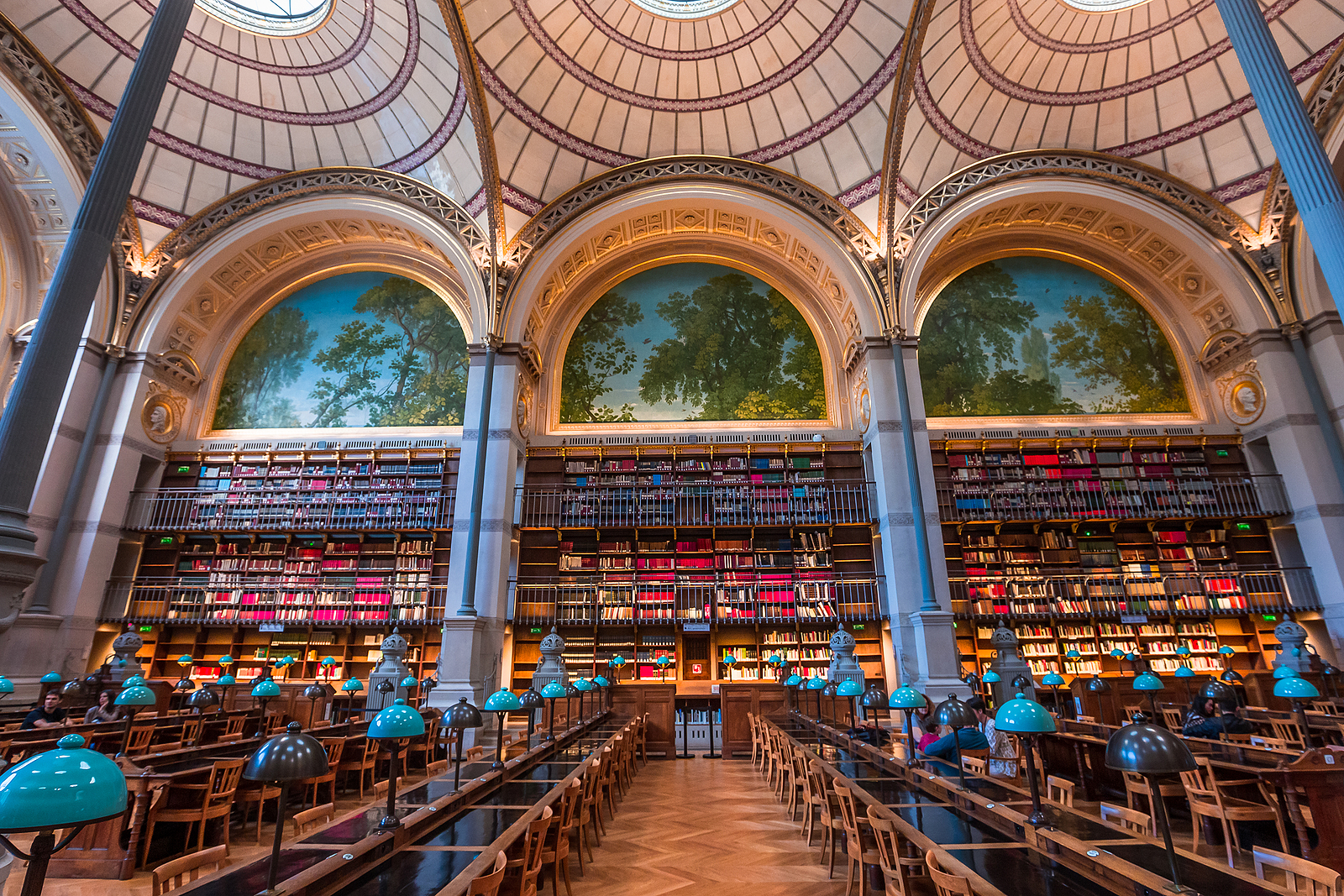 The largest abbey library in the world. Admont Abbey Library in Austria is undeniably gorgeous. This picture-perfect library - sometimes referred to as the eighth Wonder of the World - was constructed in the early 18th century and modelled after the aforementioned Austrian National Library in Vienna. While the buildings may date from the same era, they each have an extremely different atmosphere and character. With 48 windows and a white and gold finish, this extraordinary space is much brighter, and features a handful of secret doors hidden behind fake bookshelves. 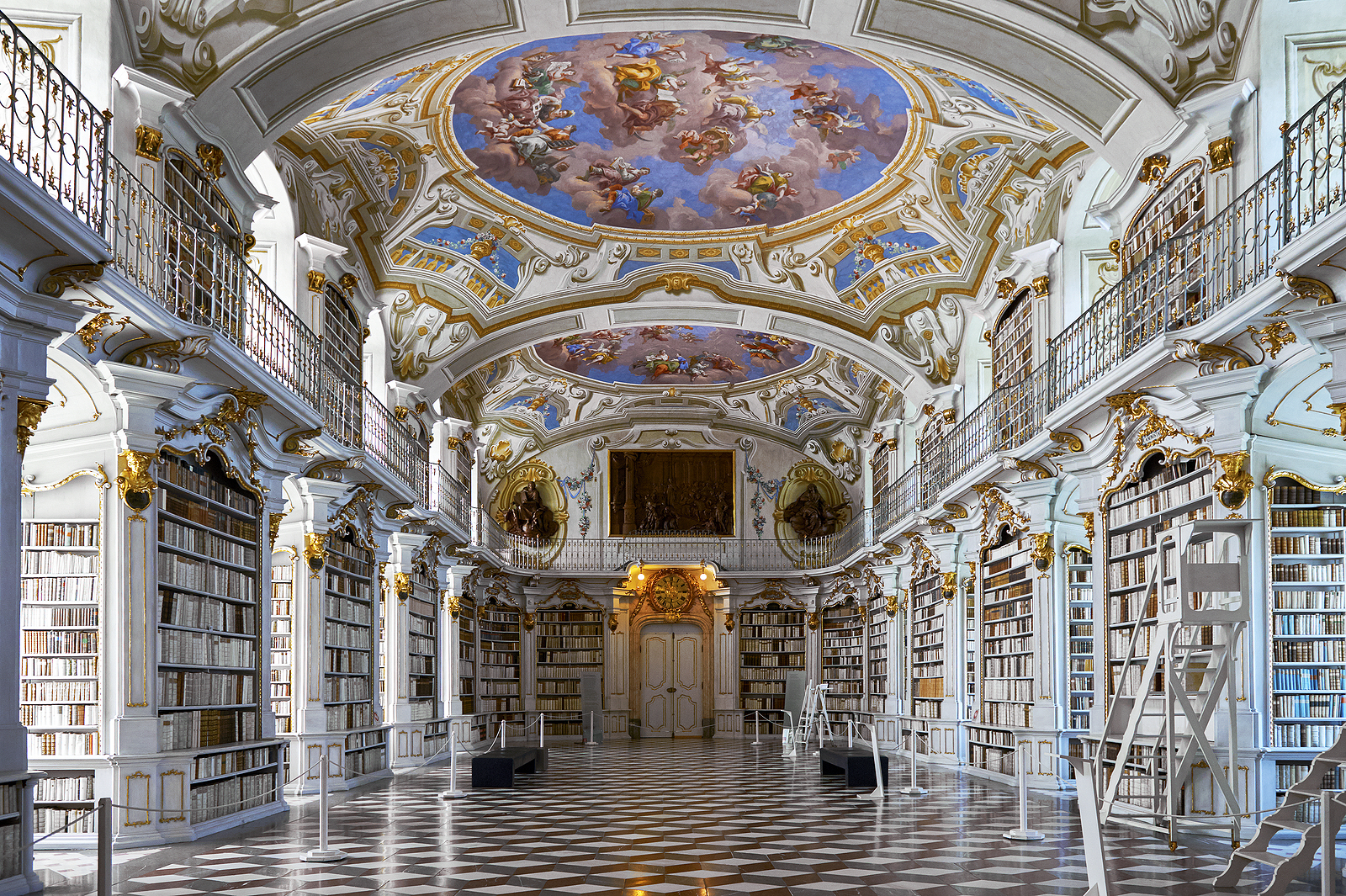 The Library at Trinity College Dublin is the largest library in Ireland, dating back to the establishment of the college way back in 1592. While the library as a whole has a far-reaching and fascinating history, the real standout is the Old Library, which was built in the early 18th century and is home to the Brian Boru harp - a national symbol of Ireland - as well as a number of ancient and significant Irish texts. The Long Room at the Old Library is lined with marble busts, the most notable of which being the bust of writer Jonathan Swift by French sculptor Louis-François Roubiliac.

Another incredible example of modern architecture, the sleek, white lines and bright lights of Stuttgart City Library’s interiors make it one of the world’s most photogenic libraries. What may look like a fairly simple cube from the outside hides a wealth of knowledge and beauty within. 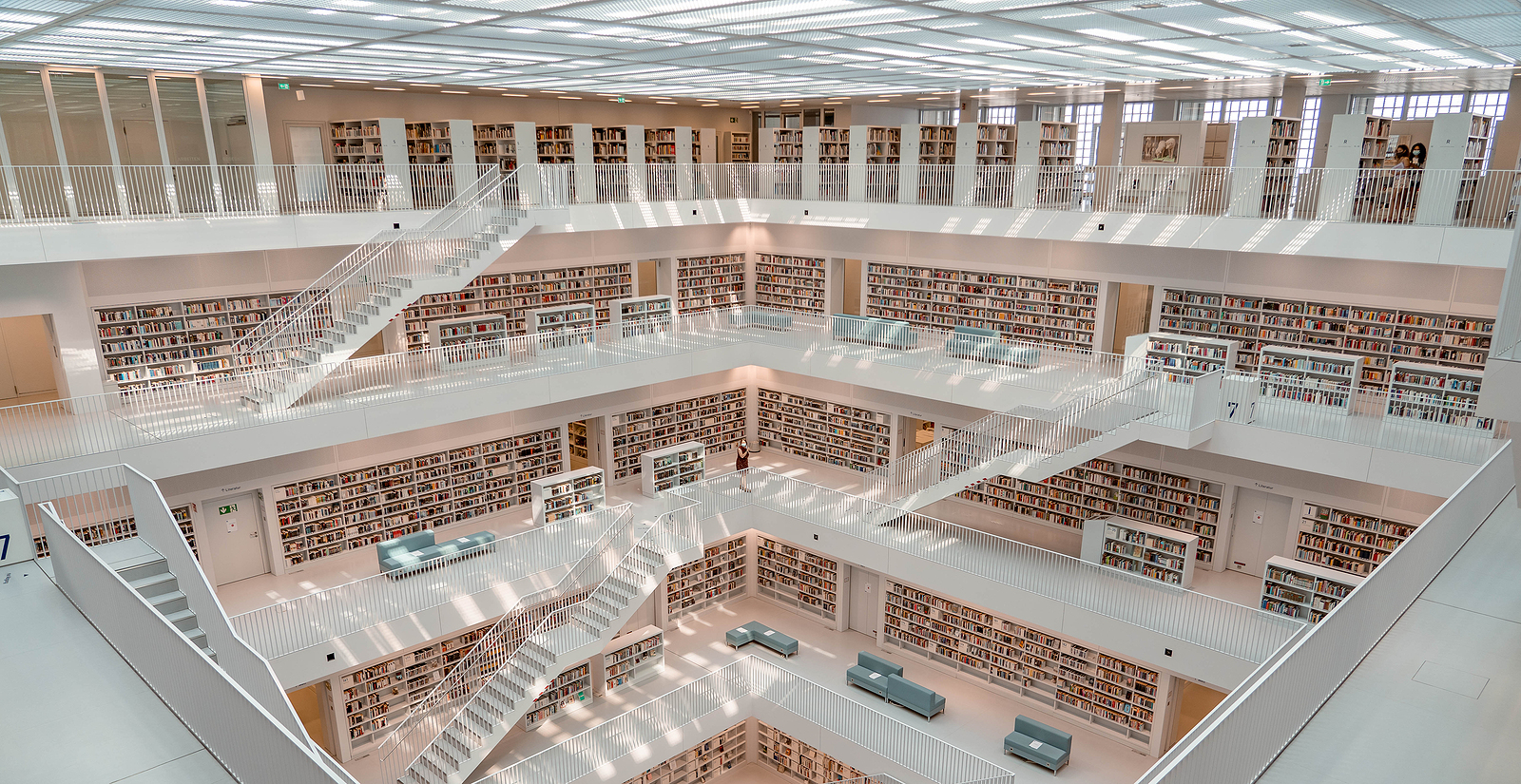 This 18th-century library in Mafra, Portugal, is beyond stunning! The shelves are home to around 36.000 leather-bound tomes all dating from the 14th to the 19th century, but at night the space really comes alive as small bats patrol the shelves, protecting the volumes from book-eating pests such as moths and bookworms. This Rococo-style library with its muted colour scheme looks and sounds like something straight out of a fairytale. 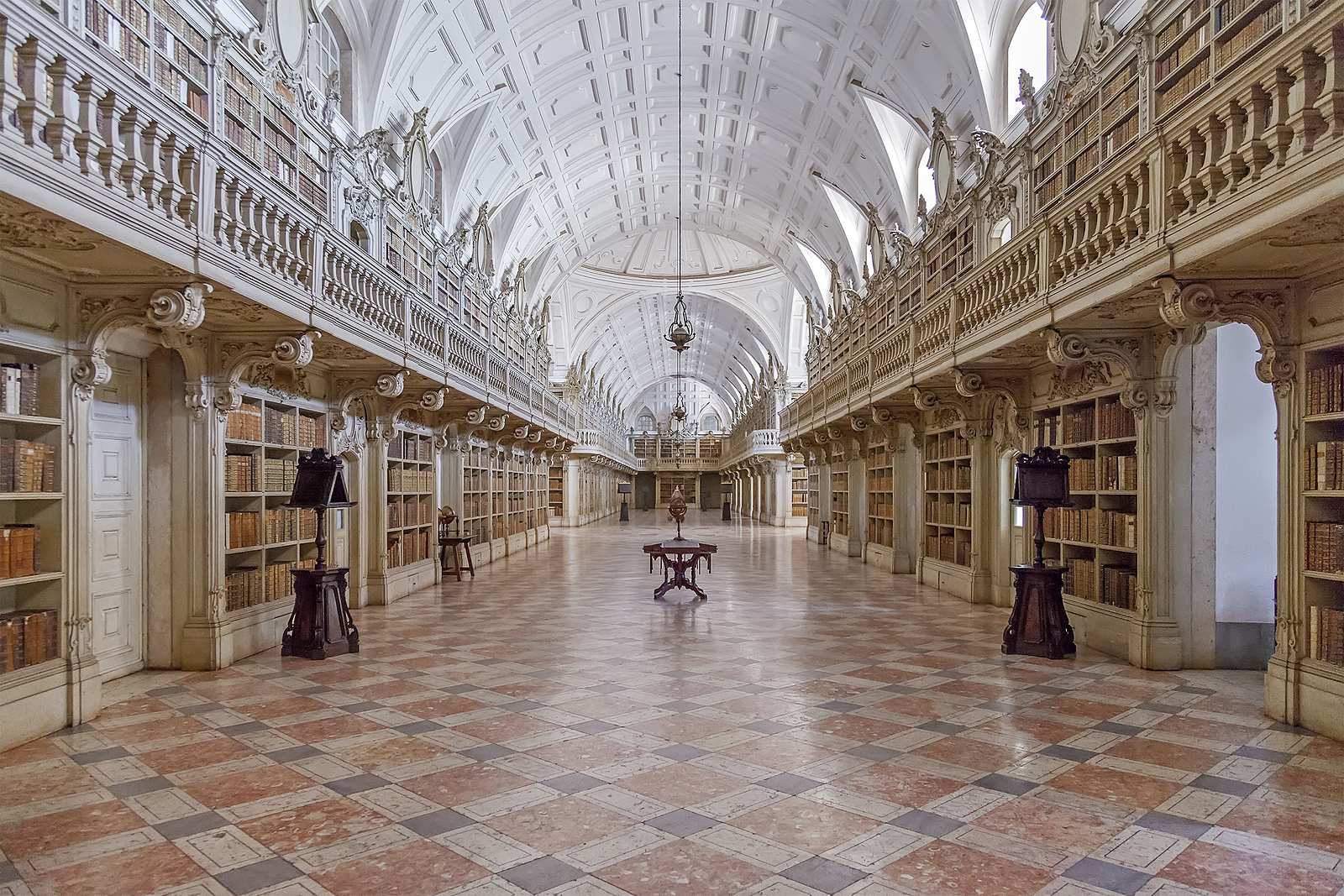 Check out these libraries in Germany

Apart from the library in Stuttgart, there are loads of beautiful libraries in Germany for you to check out. One of the most spectacular is the Wiblingen Monastery Library in Ulm, with its ornate rococo style the library continues to attract locals, students and tourists. The Stadtbücherei in Bad Nauheim, Hesse (pictured in the thumbnail) and the Grimm Zentrum University Library at the Humboldt University of Berlin are another two examples of grand libraries worth checking out during your travels in Germany.

Victoria grew up in Amsterdam, before moving to the UK to study English and Related Literature at the University of York and completing her NCTJ course at the Press Association...