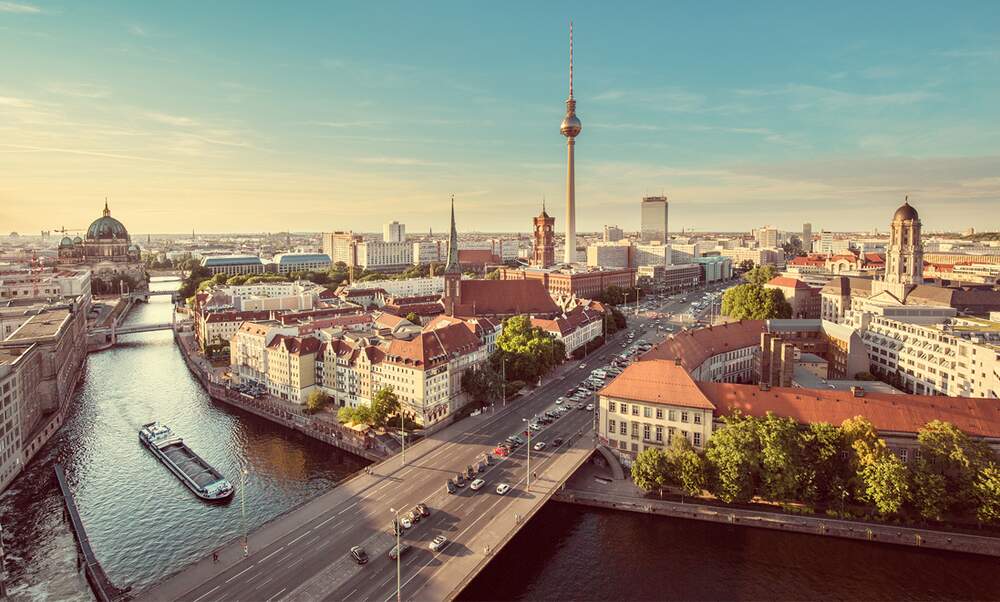 Living in, moving to or visiting Berlin? Read our information and useful links for locals, expats, students and tourists.

Germany’s capital and largest city, the city-state of Berlin, is situated in the east of the country, surrounded by the state of Brandenburg. In a perpetual position of regeneration since the 1940s, today Berlin is simultaneously both a vibrant, cutting-edge metropolis and a palimpsest of Germany’s turbulent past, with history oozing from every pore of the city.

A short history of Berlin

Perhaps unsurprisingly for a city that prides itself on its tolerant and multicultural outlook, Berlin’s origins can be traced to the 1307 union of two trading posts on the River Spree: Old Berlin (present-day Nikolaiviertel) and Kölln. After the devastating impact of the Thirty Years’ War, which reduced the fledgeling city’s population by 50 percent, a policy of welcoming political and religious refugees became the means of fuelling Berlin’s recovery.

Although its relationship with multiculturalism has not always been clear-cut, in the intervening 700 years Berlin has repeatedly turned to immigration as an instrument of regeneration.

In the 18th and 19th centuries, Berlin was twice declared a capital city: first for the Kingdom of Prussia and then for the newly-founded German Empire. Following the establishment of the Universität zu Berlin (today’s Humboldt University), Berlin had become an intellectual and cultural hub, and thousands flocked to the city from all over the world.

Germany’s humiliating defeat in the First World War brought Berlin to its knees. After four years of conflict, huge swathes of Berlin’s population were left poverty-stricken, malnourished and unemployed. A short-lived economic recovery, which brought a storm of artistic and cultural experimentation, hedonism and decadence, was brought to an abrupt end with the crash of the American stock market in 1929.

The ensuing political and economic instability was needed for Adolf Hitler and his Nazi party to take hold. The shaky foundations of Weimar Germany - the values of democracy, free speech and tolerance - were dismantled. By the time Berlin hosted the Olympic Games in 1936, concentration camps were already being constructed in and around the city. A mixture of forced emigration and systemic annihilation ensured that, by the end of the Second World War, Berlin’s Jewish community had been reduced from 160.000 to an estimated 5.000.

After the war, Germany was divided by the allies into occupation zones. Berlin, too, was divided, with West Berlin becoming an island in Soviet-controlled East Germany. Spurred on by mounting Cold War tensions, in 1961 East Germany built the Berlin Wall around West Berlin, isolating it completely. For 28 years, it was virtually impossible for East Germans to travel to West Germany. While economic recovery was spurred in the West by the arrival of so-called “guest workers” (Gastarbeiter) from Turkey, Yugoslavia and Italy, in the East an increasingly oppressive rule was developing, overseen by the notorious Stasi (Ministry for State Security).

Collapsing under the pressure of mass protests and mass escapes, in November 1989 the East German government opened the Berlin Wall. Preserving only a few segments as monuments, the wall was completely demolished.

Reunited, Berlin has gradually re-established itself as a cultural hub where more emphasis is placed on experimentation and creativity than wealth and status symbols, summed up in its unofficial motto of “Arm, aber sexy” (poor, but sexy). Huge construction projects have transformed the face of Berlin, giving it an increasingly international aspect. The city exerts a great pull on entrepreneurs, creatives and tourists alike, who delight in its cheap rentals, vibrant nightlife scene and wealth of sights and attractions.

What to do in Berlin: Sights & Activities

If you are stopping in Berlin, make sure to tick a couple of these off your list:

Berliners are spoilt for choice when it comes to museums. The city even has an island (Museuminsel) dedicated to them! The five museums on this UNESCO World Heritage site house 6.000 years of art, architecture, artefacts and sculpture. Take a walk through the ancient Babylonian Ishtar Gate at the Pergamon Museum, take in the Greek and Roman sculpture at the Altes Museum, and stand face-to-face with Queen Nefertiti at the Neues Museum.

Take a walk into the past

Unusually for a city so large, most of Berlin’s major historical sites are packed into a single district, Mitte. In less than an hour, you can walk from the Museuminsel, down Unter den Linden, and around to Potsdamer Platz. This four-kilometre stretch of imperial boulevard is saturated with historical points of interest, including Bebelplatz, site of one of the infamous Nazi book burnings, the Brandenburg Gate, the Reichstag and the Memorial for the Murdered Jews of Europe. Immerse yourself in Berlin’s tumultuous yet fascinating history by joining one of the walking tours that leave from Pariser Platz twice a day.

Berlin is well kitted-out for spending sprees. Many shoppers head west to the glamorous Kurfürstendamm, Berlin’s busiest shopping street which is also home to KaDeWe, Europe’s oldest department store. On Saturday and Sunday mornings, bargain-seekers and idle browsers can be found searching for treasure at the flea markets at Mauerpark, Marheinekeplatz or Arkonaplatz.

Get something to eat

It should come as no surprise that Germany’s capital city is positively groaning with fantastic snack eateries, restaurants and bars. The dizzying array of concepts and cuisines means there really are options to suit all tastes and budgets, from Döners to Michelin Stars (Berlin has 28 in total!) You’re never far away from somewhere to drink, either. Why not start the evening like a local and have a beer at your local Späti (Spätkauf - a late-night convenience store) before heading out on the town?

Dance the weekend away

Forget New York, Berlin is the city that never sleeps. The infamous clubbing scene isn’t confined to the hours of darkness, but buzzes the whole weekend through and well into the week. While some clubs have become fixtures and achieved worldwide fame, elsewhere smaller venues pop up and disappear as quickly as would-be revellers get turned away by Berghain’s notorious bouncer.

Berlin is well-connected with an extensive S-Bahn, U-Bahn, tram and bus network run by the transport association VBB.

There are regular events taking place throughout the year in Berlin, such as:

The city turns into a runway twice a year for Berlin Fashion Week (January & July). Alongside the fashion shows and trade fairs, a number of exhibitions and conferences pop up all over the capital.

The Berlin International Film Festival, held annually in February, is one of the “big three” European film festivals (alongside Cannes and Venice). Best of all, it’s public, so you can get your hands on tickets for one of over 400 film screenings, from blockbusters to indie flicks.

Every year in the Spring, Berlin’s residents turn out to celebrate its cultural diversity. The Carnival of Cultures, a four-day street festival, including music, food and performances, culminates in a colourful parade.

Since 1964, JazzFest Berlin has been bringing in jazz musicians from all over the world to play in some of the city’s best music venues.

Love Berlin so much you want to stay forever? Us too! Browse our list of expat jobs in Berlin to make your dream become a reality.

Although rents are on the rise, Berlin is a remarkably affordable capital city. If you’re in need of a place to stay, why not check out our short-term accommodation or places to rent in Berlin?