Hesse is a federal state in west-central Germany that is bordered by the states of Lower Saxony, Thuringia, Bavaria, Baden-Württemberg, Rhineland-Palatinate and North Rhine-Westphalia.

A brief history of Hesse

The earliest inhabitants of the territory we nowadays know as Hesse, the Hessians, are thought to be descended from the Chatti, a Frankish tribe. While Hesse was initially a centre of pagan belief, by the mid 7th-century the Franks had established dominance, and gradually christianised the whole area.

War of the Thuringian Succession

Hesse was governed by various dynasties from the 10th century onwards, before being passed to Thuringia in 1130. But when Henry Raspe, the last landgrave of Thuringia, died childless in 1247, the ensuing conflict over a successor enabled Hesse to gain independence once more. In 1292 its ruler, Henry I of Hesse, was raised to the status of prince.

Over the next few centuries, Hesse expanded in size and importance, particularly under the reign of Philip the Magnanimous, one of the leaders of the German Reformation. In his last will, Philip divided Hesse among his four sons into four territories: Hesse-Kassel, Hesse-Darmstadt, Hesse-Rheinfels and Hesse-Marburg. When the latter two lines died out relatively quickly, their territories were absorbed into the former.

While Kassel adopted Calvinism in the late 16th century, Darmstadt remained Lutheran, meaning that the two lines often found themselves on opposite sides of conflict, most notably during the Thirty Years’ War. In 1803, William I of Hessen-Kassel was elevated to the status of Prince-Elector, but he did not have much time to enjoy his newly-gained privileges, as the Holy Roman Empire was formally disbanded only a short time later, in 1806.

“The People’s Republic of Hesse”

After the end of WWI and the dissolution of the monarchy in Germany, Hesse reinvented itself as a republic, “The People’s State of Hesse”, with a democratic constitution. Shortly thereafter, French troops moved in to occupy the western banks of the River Rhine, as stipulated in the Versailles peace treaty that officially ended the war.

This area would soon come to be reoccupied by the French in the aftermath of World War II; the rest of the state fell under the US occupation zone. The French part of Hesse was separated from the rest and incorporated into the newly-founded state of Rhineland-Palatinate. The United States, in turn, founded the state of Greater Hesse on September 19, 1945. This name was officially changed to Hesse on December 4, 1946.

During the 1940s, Hesse received more than a million displaced ethnic Germans and, due to its proximity to the Inner German Border, became an important location for NATO installations and military bases. Over time, the state gradually recovered from the ravages of war to emerge as one of the richest states in Germany. Nowadays, it functions as the financial capital of mainland Europe.

Lying between the Upper Rhine Plateau and the Thuringian Forest, Hesse is the greenest state in Germany, with some 42 percent of its surface area covered by trees, primarily beeches and conifers. The state’s countryside is hilly, with numerous mountain ranges including the Rhön, the Westwald, the Taunus and the Vogelsberg,

Hesse primarily owes its lushness to the five rivers that traverse the state: the Fulda and Eder to the north, the Lahn in central Hesse and the Main and Rhine rivers to the south.

Hesse is characterised by two different climates: the warm, humid, continental climate that dominates in cities like Marburg and Fulda, and the oceanic climate in Frankfurt am Main, Wiesbaden, Kassel, Darmstadt and Main.

This means that the weather can vary considerably both between seasons and between different parts of the state. Generally, the climate is mild and temperate, with a significant amount of rainfall throughout the year. The average temperature is 9,2 degrees, varying from an average high of 23,3 degrees in July to an average low of -2,1 degrees in January.

High or standard German is the most widely-spoken language in Hesse, although you will still find areas where Hessian is still spoken. Hessian is a family of dialects that can be subdivided into Northern, Central, Eastern and Southern Hessian.

The most distinctive feature of Hessian dialects is that they tend to soften consonants. For instance, the German word “Ӓpfel” (apples) becomes “Ebbel” in Hessian - a word you are likely to recognise if you’ve ever tasted the regional speciality called Ebbelwoi, a local type of apple wine that’s so beloved it even has its own festival.

The largest cities in Hesse are mainly clustered in the south of the state, although there are a handful further north that are also worth a visit.

Wiesbaden is the state capital of Hesse. At one time, this historic spa city boasted 26 hot springs that attracted visitors from far and wide. Nowadays, relaxed Wiesbaden continues to delight with its charming neoclassical architecture and proximity to the Rheingau winegrowing region. It’s also home to one of the country’s largest American expat populations.

Germany’s home of business and finance, nicknamed “Mainhatten” due to its location on the River Main, is a metropolis of contrasts: towering skyscrapers and suave financiers coexist with tottering medieval architecture and a laid-back student population. Frankfurt am Main also boasts the highest concentration of expats in Germany.

It may be only nine kilometres away and part of the same urban area, but thousand-year-old Offenbach is so much more than a suburb of Frankfurt. Formerly a factory city that was the centre of leather manufacturing in Germany, nowadays Offenbach is a friendly place with a warm, neighbourly atmosphere.

Hesse’s former state capital is an epicentre for science and technology in Germany - the invention of the recreational drug ecstasy is just one of its claims to fame. Although a large part of the centre was destroyed during World War II, Darmstadt is still peppered with a fantastic variety of architectural monuments.

Located around halfway between Frankfurt and Marburg, this university city is most famous for its “Elephant’s Toilet”, said to be a “masterwork” of questionable urban planning policy in Germany in the postwar years.

As you would expect, the birthplace of the Brothers Grimm is a magical city of timber-framed buildings and ramshackle cobblestone alleyways. It’s also the southern starting point for the German Fairy Tale Road.

Lesser-known among German cities, Kassel is a hidden gem of culture. Its unique Bergpark Wilhelmshöhe was designated a UNESCO World Heritage Site in 2013.

Plenty of German specialities are favourites in Hesse - traditional dishes such as sauerkraut, fried potatoes, schnitzel and roast meats will appear on most menus - as does Hesse’s most famous invention, the Frankfurter sausage. Hessians are also very fond of their cheese. A popular dish in Apple Wine Taverns is “Handkäs mit Musik”, a tangy local cheese that is served with a dressing of vinegar, vegetable oil and onions.

One regional speciality you’ll come across time and time again in Hesse is green sauce (Grüne Soße or Grie Soss in Hessian). Served as an accompaniment to anything from boiled potatoes to roast meats, green sauce was allegedly Goethe’s favourite dish. It has become such a cultural icon it’s spawned its own festival.

Passing through Hesse? Make sure at least some of these sights and attractions are on your to-do list - if not all of them!

An unbroken stretch of high-rise buildings is a pretty rare sight in Europe. Walking across the Alte Brücke at sundown provides one of the best vantage points or, if you fancy a splurge, take one of the river cruises that leave regularly from Eiserner Steg.

From the new to the old: soak up 1.200 years of history in Limburg an der Lahn, a little town where time stands still. With its mass of half-timbered houses and cobbled lanes, Limburg truly is a picture-perfect gem.

Whether or not it was actually the inspiration for Mary Shelley’s famous novel is up for debate, but it’s still a good story. This creepy, half-ruined castle was once inhabited by an eccentric scientist who liked to conduct experiments. If you’re up for a real scare-fest, the Halloween Party at Burg Frankenstein is one of the biggest events in Europe.

Founded in the Rheingau in 1136, this medieval cistercian monastery is one of the best-preserved in the whole of Europe. Feast your eyes on the Romanesque and early Gothic buildings and taste the wines that made the monastery into a household name. Film buffs will also recognise Eberbach as one of the locations in The Name of the Rose.

Explore the “Grand Canyon of Romanticism”, a 320-kilometre route that takes you all the way from Bonn to Wiesbaden, past medieval towns, sloping vineyards and imposing castles, and through the breathtakingly beautiful scenery of the Kellerwald-Edersee National Park.

Hesse’s civil flag is a bicolour with a red top and a larger white bottom stripe. The colours come from the Ludovingian coat of arms, which was inherited by the House of Hesse when it split from the Duchy of Thuringia in 1247. The red and white stripes have been used by Hesse ever since. The flag of Thuringia is the reverse of the Hessian flag. 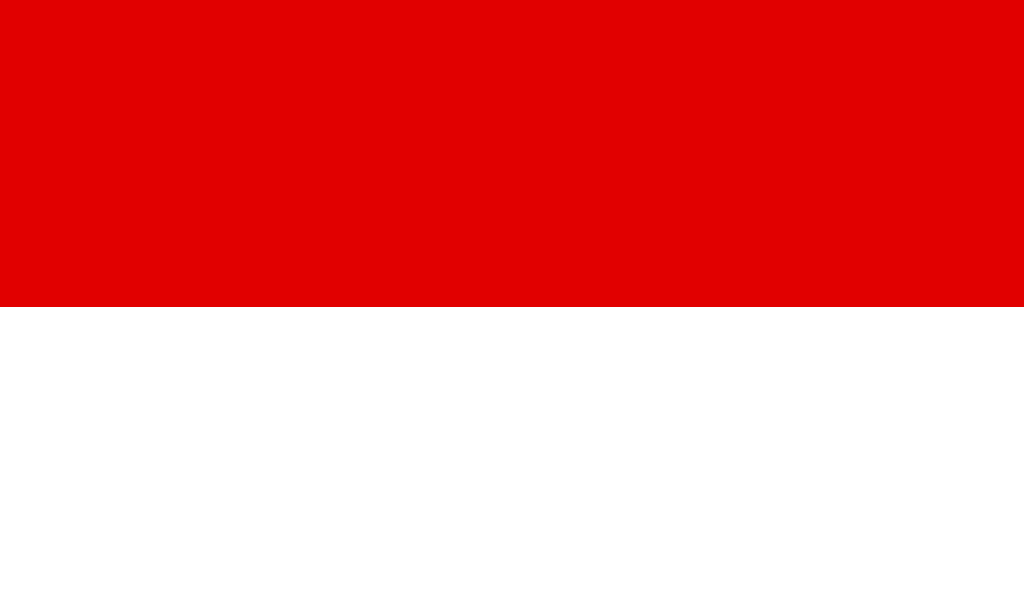 The state flag of Hesse also features the red and white stripes, with a state coat of arms in the centre. This flag may only be used by governmental organisations and agencies. 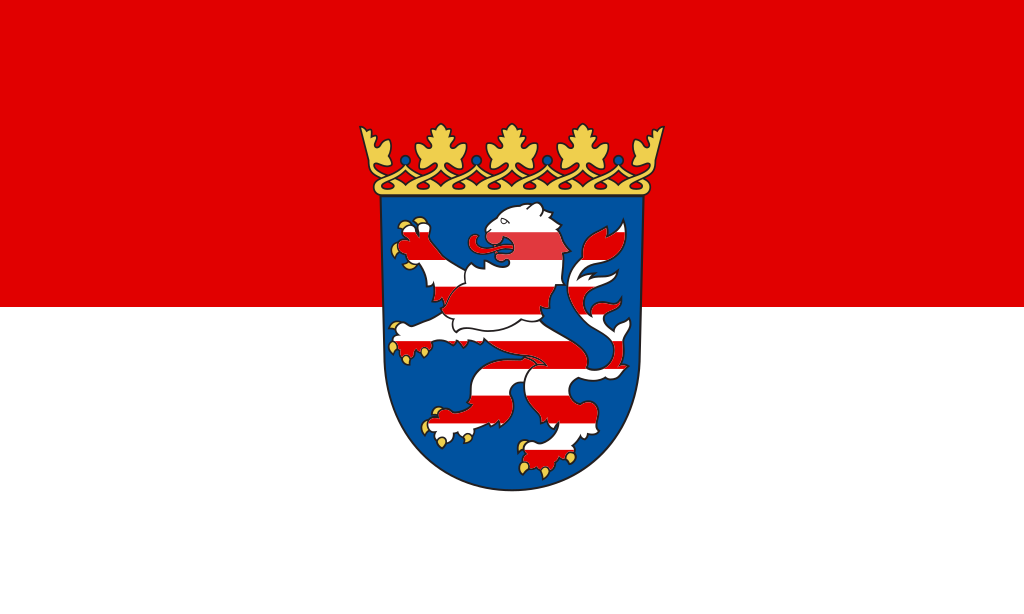