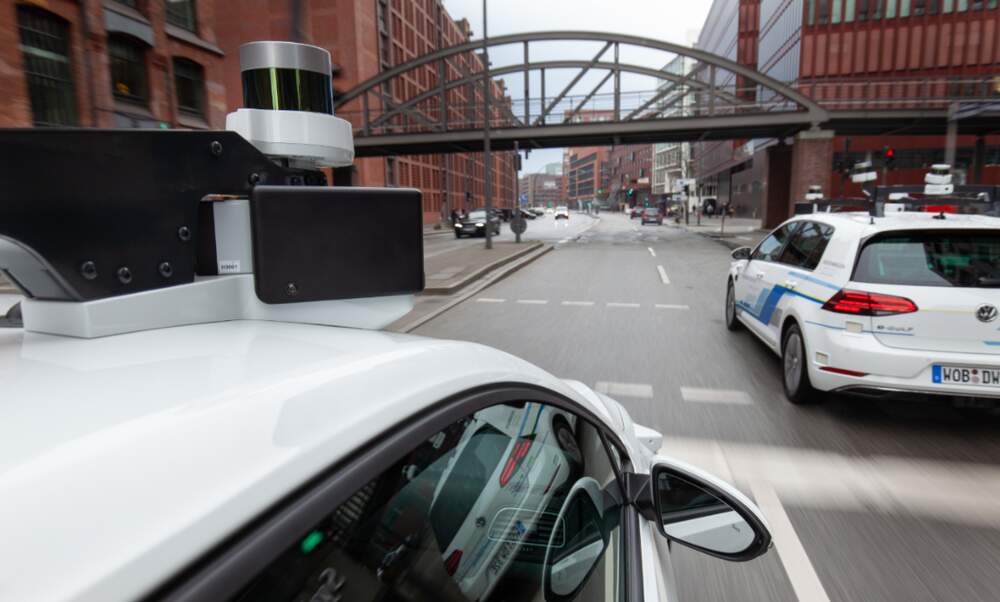 Volkswagen announced on Wednesday that tests involving a fleet of self-driving cars are now underway on the streets of Hamburg. This is the first time autonomous cars have been tested in any major German city.

Fleet of driverless cars in Hamburg

The five modified electric cars have Level 4 automation, meaning they can handle complex traffic patterns autonomously, but that drivers must be present to intervene if necessary. The cars navigate their way around with the help of 14 cameras, seven radar units and 11 laser scanners. Each car contains a computer with the processing power of 15 laptops, capable of communicating 5GB of data per minute!

They are currently driving a 3-kilometre stretch of urban roads in Hamburg, where traffic management systems have been updated to facilitate autonomous vehicles. Volkswagen and Hamburg’s state government are also constructing a further 9-kilometre “digital testbed”, complete with technology that allows vehicles and signalling systems to communicate with each other. This is scheduled for completion in 2020.

Fully autonomous cars on the horizon

Volkswagen says that its ultimate goal is to develop cars with Level 5 automation - ones without steering wheels or pedals, capable of driving without any human intervention. For this to happen, however, significant changes in regulations would have to take place.

In a bid to make driving more safe and comfortable, the German federal government is keen to promote research into autonomous technology. Funding has recently been granted for similar test projects in other German cities, including Berlin, Dresden, Düsseldorf and Munich. A future with driverless cars, buses and taxis might not be as far off as you’d expect!

See the driverless cars in action in this video: