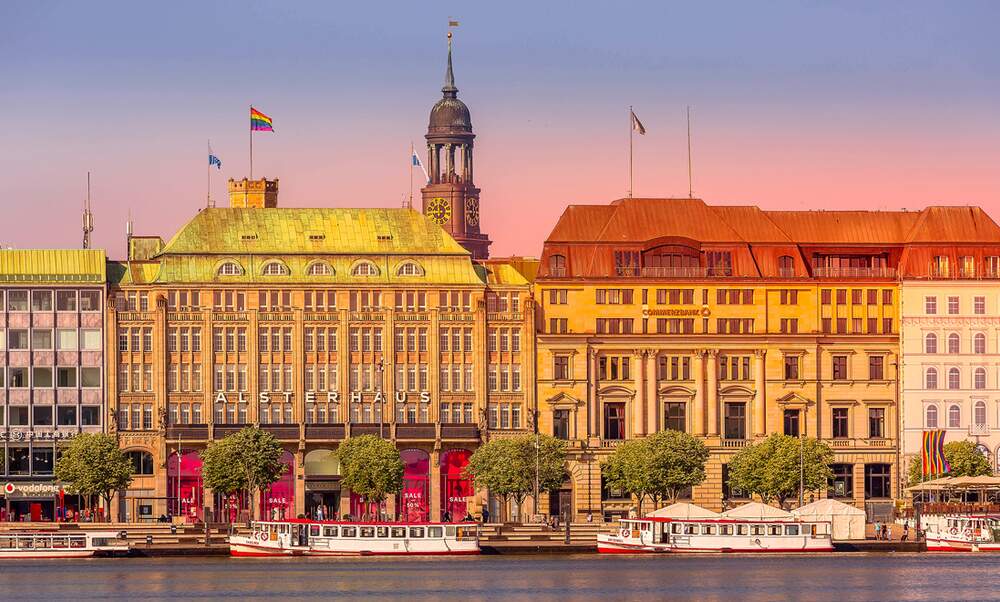 Living in, or visiting Hamburg? Our expat guide is packed with history, information, tips and useful links.

Hamburg is the second-biggest city in Germany and the second-smallest federal state (after Bremen). Lying on the River Elbe and owing its wealth to its proximity to the North Sea, Hamburg is a port city at heart, and proud of it. Its background in seafaring and international trade is present everywhere, from the city’s industrial skyline and historic red-light district, to its majestic town hall and penchant for pickled herrings. Germany’s second city, perhaps, but Hamburg will never settle for being second-best to Berlin.

Its unofficial symbol is the phoenix, an apt choice for a city that has time and again demonstrated its resilience: repeatedly burnt, bombed and sacked, Hamburg always rises from the ashes more vibrant than before.

A short history of Hamburg

The city’s name is derived from its first permanent structure - “Hammaburg”, a castle that was built between the Alster and Elbe rivers in 825 AD as a defence against Slavic invasion. The gated fort - also a reference to Hamburg’s self-styled label as “the gateway to the world” - can still be seen on the city’s coat of arms.

In 845 AD, 600 Viking ships sailed up the Elbe river and burnt the young city to the ground. Although quickly rebuilt, over the next 300 years Hamburg would burn down another eight times, as the kings of Poland and Denmark, pirates, accidental fires, and the Black Death all ravaged the city.

The Free and Hanseatic City of Hamburg

In 1189, Emperor Frederick Barbarossa granted Hamburg the status of a Free Imperial City and tax-free access to the Elbe River. These new powers propelled Hamburg’s status as a key trading power in Europe. The prospering city struck an alliance in 1241 with nearby Lübeck, founding what would eventually become the Hanseatic League (Cologne joined in 1260 and London soon followed). Membership of this powerful association of merchant cities proved crucial to Hamburg’s economic position in the world.

The Great Fire of Hamburg

Early in the morning of May 5, 1842, a fire began at a cigar factory on Deichstraße and quickly spread. Despite the efforts of firefighters, the blaze continued for three days, destroying around a third of the city and killing 51 people. The St Petri Church, Nikolai Church and the Rathaus (town hall) were all destroyed in the fire and 20.000 people were left homeless.

Before the Second World War, Hamburg had Germany’s largest Jewish community. By October 1941, however, systematic deportations to concentration camps had begun, and by the war’s end only 674 Jews remained in the city. Hamburg surrendered without a fight in May 1945, three days after Hitler’s suicide. As part of “Operation Gomorrah”, the city had been almost completely destroyed by allied firebombing raids which left more than 55.000 civilians dead.

From ashes, the city has recovered once more: the establishment of a new business district in the 1960s reignited Hamburg’s reputation as a major centre of commerce. Simultaneously, Hamburg’s creative hangouts were attracting and nurturing fresh talent like the Beatles. With the fall of the Berlin Wall and the re-integration of eastern markets, Hamburg is steadily regaining its position as a global trading power.

What to do in Hamburg: sights & activities

If you’re in Hamburg, you cannot afford to miss these experiences:

Topping every single list of things to see in Hamburg is the world’s largest model train exhibit. Cynics may scoff, but no-one is immune to Miniatur Wunderland’s irresistible pull. Collect your mini bar of (real!) chocolate from the Lindt factory, be awed as it turns from day to night, and gasp as a model Airbus lands on the Hamburg airport runway.

Take a stroll around the Alster

In the city that supposedly boasts more canals than Amsterdam, you’re never far from water. That being said, some of the finest views are to be had around the Binnenalster and Außenalster, the twin lakes which form the central focus of Hamburg’s Altstadt. Interestingly, they are not actually natural lakes, but dammed-off portions of the River Alster.

Blowing the municipal budget isn’t a problem when the result is this spectacular. Perched on top of a former harbour warehouse and completed with 1.096 curved glass panes, the Elbphilharmonie concert hall is designed to look like a hoisted sail or a wave. After spiralling construction costs caused multiple delays, it finally opened in January 2017. Even if classical concerts aren’t your thing, be sure to visit just to experience Europe’s longest escalator and the panoramic views from the Plaza.

Night out on the Reeperbahn

Tacky? Yes. Seedy? Sometimes. Still great fun? Most definitely. A trip to Hamburg wouldn’t be complete without a night out “auf dem Kiez” (Hamburg slang for “on the Reeperbahn”). Follow in the footsteps of the Beatles, drink a few Mexikaners and end the night like a true Hamburger with a 5am Fischbrötchen (fish roll) at the Fischmarkt in St Pauli.

Hamburg’s easy-to-use network of buses, trams, S-bahns and U-bahns makes moving around the city a breeze. All lines are covered by the same transport association, HVV.

These regular events in Hamburg are not to be missed!

Düsseldorf may host the biggest funfair on the Rhine, but the accolade “biggest funfair in northern Germany” goes to Hamburg. Taking place for 30 days three times a year (Winter, Spring and Summer), the DOM festival has everything from vintage horse-carousels to high-tech roller coasters. There is also a fireworks display every Friday night.

Commemorating the date in May when Emperor Barbarossa granted Hamburg Free City status, the annual Port Anniversary festival welcomes more than a million visitors. As well as the Grand Arrival Parade of 300 vessels, there are boat races, music performances and a fireworks show.

Centered around Hamburg’s Altona district, Altonale is a 17-day cultural festival in June, consisting of over 200 art, music, film and theatre events. On the final weekend there is a street festival and flea market.

Taking place every year in September, the Reeperbahn Festival presents more than 900 music events in locations across Hamburg. There is also a conference programme for music professionals, featuring showcases, networking events and awards ceremonies.

Hamburg’s prominence in the global trade industry makes it a prime hub for international companies. Additionally, many of Germany’s top publishing, broadcasting and banking companies have their headquarters here, meaning that there are many job opportunities for expats in Hamburg.

Like most German cities, good-quality, affordable housing is in high demand in Hamburg. Our housing in Hamburg listings will help you to get started in your search.

Home to over 20 German universities, including the Universität Hamburg and various universities of applied science, Hamburg is a popular choice with students in Germany.