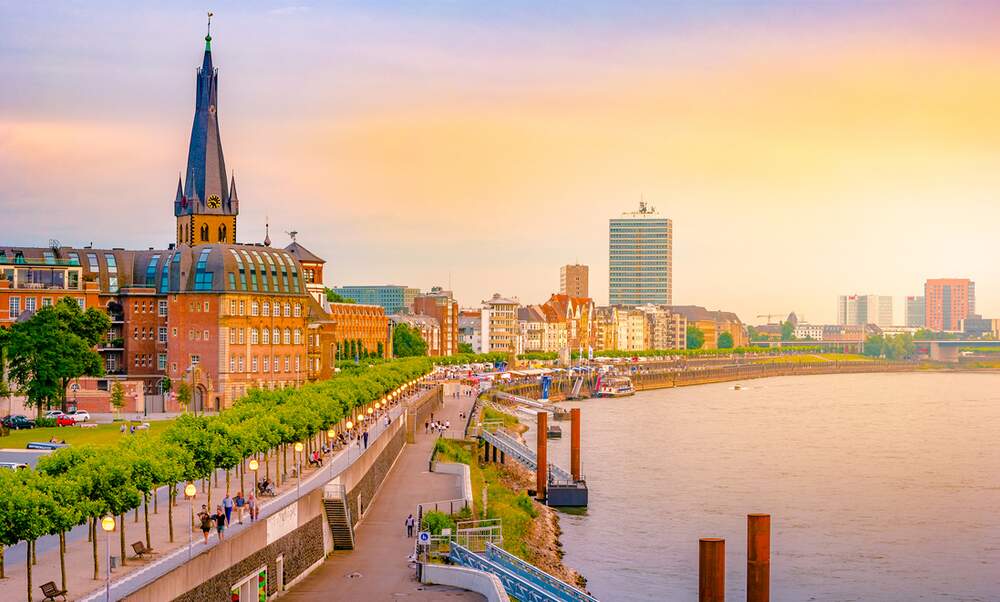 Whether you’re living in Düsseldorf or just passing through, make sure to read our city guide, with useful information, links and tips!

Situated around 34 km northwest of Cologne and straddling the convergence of the Rhine and Düssel rivers, Düsseldorf is Germany’s seventh-largest city and the state capital of North-Rhine Westphalia.

Despite being almost 730 years old, Düsseldorf is a remarkably modern city: as well as being the German home of banking, advertising, fashion and telecommunications, it hosts a thriving art, architecture and electronic music scene.

A short history of Düsseldorf

From 1186, Düsseldorf was ruled by the Counts of Berg, who were increasingly caught up in a squabble over succession with the Archbishop of Cologne. When Count Adolf of Berg emerged victorious in 1288, he acknowledged the support he had received from Düsseldorf’s citizens by elevating the fledgling town to city status. According to legend, the town’s children celebrated by cartwheeling through the streets. Today, this story is commemorated with the symbol of a cartwheeler (Düsseldorfer Radschläger), which adorns many buildings, monuments and souvenirs.

In 1380, Düsseldorf became the seat of the Duchy of Berg, and quickly prospered on trade from the Rhine. Arts and culture flourished until they were brought to an abrupt halt by the outbreak of the Napoleonic Wars. When Napoleon was defeated in 1815, however, the whole Rhineland was passed on to Prussia, and Düsseldorf was established as the region’s capital. This, coupled with the arrival of the industrial revolution, brought about a revival as industry and trade flourished once more.

As a centre of industry, Düsseldorf was a primary target for Allied bombing campaigns during the Second World War. An estimated 64 percent of Düsseldorf’s built-up areas were destroyed in aerial raids. On April 18, 1945, the German Resistance in Düsseldorf launched Aktion Rheinland, a campaign which successfully ensured the city’s surrender to US forces without the need for further combat.

Since the war, (re)building in Düsseldorf has proceeded apace, from the painstaking reconstruction of the old town, to the ambitious revamping of the MediaHafen harbour area. Today, new and old coexist in a prosperous city that is bustling with commerce and festivities.

What to do in Düsseldorf: sights & activities

A stay in Düsseldorf wouldn’t be complete without doing at least some of the following:

The result of an ambitious redesign of the city’s derelict docks, MediaHafen is the beating heart of Düsseldorf’s media and design industry. Rather than imposing a uniform style upon the whole area, redevelopers gave the architects free range to build in their own styles. The result is a spectacle of cutting-edge architecture and design, where office spaces meet restaurants and bars.

Where Cologne has Kölsch, Düsseldorf has Altbier, a kind of top-fermented lager beer. (Incidentally, don’t order a Kölsch in Düsseldorf unless you want to be roundly scorned - there’s a longstanding rivalry between the two cities). Traditional craft breweries have been making Altbier for centuries in Düsseldorf’s Altstadt quarter, which at night turns into the so-called “longest bar in the world”, with over 260 cafes, bars and breweries packed into a single square kilometre.

Düsseldorf has another, interesting claim to fame: nicknamed “Little Tokyo on the Rhine”, it is home to Germany’s largest Japanese community. A quick walk along Immermannstraße will take you past innumerable shops, supermarkets and restaurants dishing out authentic Japanese fare. If you’ve only got time for a snack, pop into one of the bakeries for an (incredibly delicious) deep-fried savoury bun.

With over 100 galleries, Düsseldorf boasts a pretty impressive art collection, with a particularly strong offering in modern art. The collection at the world-famous Kunstsammlung Nordrhein-Westfalen has become so large it has to be split between two museums, K20 and K21.

Düsseldorf and high fashion go together hand in hand! The top destination for the fashion-conscious is glamorous Königsallee (sometimes called “Kö” by locals). Even if you’re only window-shopping, a stroll past the elegant boutiques, flagship designer stores and jewellery studios is a feast for the eyes.

The transport association Rheinbahn operates a unified network of U-Bahn trains, buses and trams across Düsseldorf.

These events in Düsseldorf are not to be missed!

This one’s for the foodies: every first Thursday of the month, Stahlwerk & Treibgut in east Düsseldorf hosts a street food festival. Expect multiple stalls serving up fresh portions of national and international cuisine.

Next to Mainz and Cologne, Düsseldorf hosts one of Germany’s most famous carnivals, with around one million becostumed visitors descending on the city every year for the Shrove Monday parade. Smaller festivities also take place from Ash Wednesday onwards.

Every May or June, Japanese culture in Düsseldorf is celebrated in a day of dance and sport performances, activity and information stands, and food stalls. Japan Day culminates in a fireworks display.

The biggest funfair on the Rhine! Between the second and third weekends of July, Düsseldorf’s St Sebastianus shooting club celebrates its patron saint. Apart from the traditional shooting competition to select the “Schützenkönig” (King of Marksmen), attendees can enjoy a funfair, beer tents, music and a marching band parade.

The MediaHafen alone is home to over 700 companies, many of them international businesses. Although the city is traditionally associated with the banking, media and telecommunications industries, there are all kinds of different jobs in Düsseldorf.

Looking for a chic apartment overlooking the harbour? Or a cosy room in the Altstadt? Find your dream place with our listings for housing in Düsseldorf.