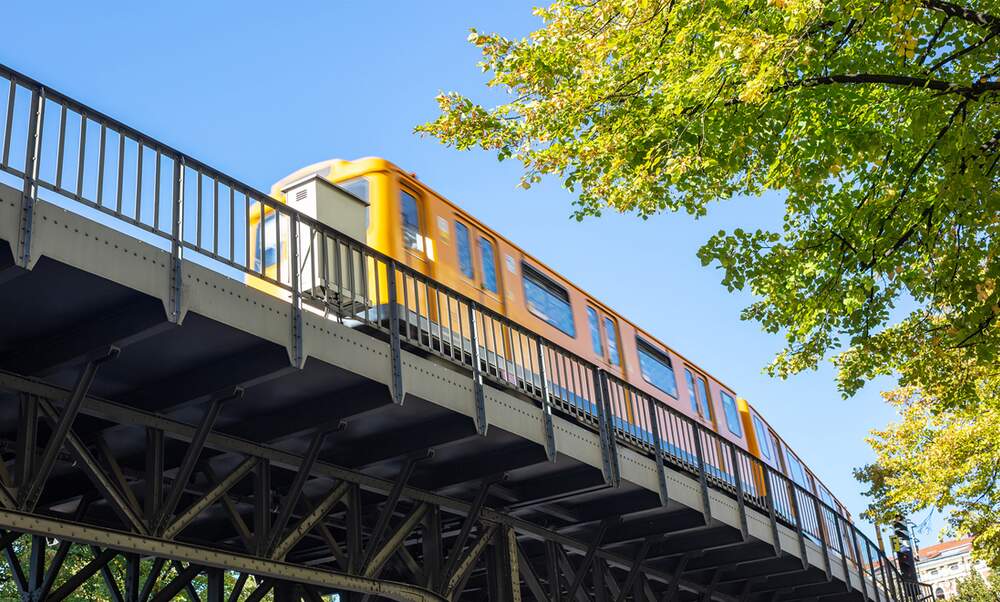 Modes of public transport in Germany

Within the German public transportation system, there are five different commonly-used modes of transport:

S-Bahn is an abbreviation of Schnellbahn or Stadtschnellbahn (city rapid rail), and, as the name suggests, is the fastest form of public transportation. It is a kind of urban-suburban rail system and serves a wider metropolitan region, linking the suburbs and commuter regions with the city centre and main rail station. The S-Bahn is denoted by a white “S” on a green background.

The U-Bahn or Untergrundbahn is the German version of the metro, subway or “the Tube” (the name is something of a misnomer, however, as many U-Bahn lines actually run above ground). The symbol for the U-Bahn in Germany is typically a white “U” on a blue sign.

Lying somewhere between a U-Bahn and a bus, trams (Straßenbahnen) are known as “streetcars” in the USA. They travel on rails alongside regular roads and have multiple stops within city centre areas. In Germany, tram stops are often combined with bus stops and indicated by the word “Tram” on a red background.

Buses are the mainstay of many German towns and cities, linking further-afield places and operating into the night when the other forms of transport stop running (although S-Bahn and U-bahn trains typically run all night over the weekend in larger cities). Bus stops, which usually fall every 300 metres or so, are signified by a green “H” (for “Haltestelle” - stopping point) on a yellow background.

Some networks also include regional trains as well, usually operated by Deutsche Bahn, the company which runs most train services in Germany. Regional trains are either RB (Regionalbahn), with multiple stops, or RE (Regionalexpress), which are faster and have fewer stops.

Travel zones are an important part of the German public transportation system. As most systems are integrated, the main thing determining the price of your ticket is how many zones you will be travelling through. Public transport maps are clearly divided into zones (Waben): zone A is typically focussed around the city centre, zone B a little further out, zone C beyond that, and so on.

No matter how many times you change from a bus to a U-Bahn to a tram to complete your journey, the same ticket will be valid as long as you stay within the correct zone(s). If you stray outside of the zone(s) for which the ticket is valid, you could be fined.

Typically there are five different types of tickets available for purchase in Germany:

Short trip tickets are only valid for two or three stops on a single form of transportation (i.e. you are not permitted to change trains).

Single tickets are generally valid for a set time period (often 90 minutes). You can change modes of transport as many times necessary to complete your journey (but return journeys or round trips are not permitted) and you must stay within the valid zone(s).

Day tickets grant you unlimited travel within specified zones for either a full day or a 24-hour period (your ticket will specify exactly when it expires). It is not uncommon for tickets to allow travel up until 2am or 3am the following day to allow passengers to return home from an evening out.

As the name suggests, week tickets are valid within specified zones for a week. You can also purchase tickets that are valid for longer (e.g. a month pass) but these usually have to be purchased from an official at the ticketing office (and in any case it’s recommended, rather than putting that much money into one of the ticket machines!)

While tickets in Germany generally don’t come cheap, the group day ticket actually offers great value for money if you are travelling in a group of three or more. Usually valid for groups of up to five people, they give unlimited travel for a day or 24 hours within specified zones.

How to buy a ticket

You can buy a ticket from one of the automated ticket machines at all tram, U-Bahn and S-Bahn stations. It is usually possible to change the language of the machine to English (look for the flags in the bottom corner). These machines do not generally take contactless or credit card payments but this is gradually changing (and you can use your EC card if you are with a German bank).

On buses, you can buy a ticket from the driver. At major stations, there is usually a staffed ticket office where you can buy all kinds of tickets, including season tickets. Most transport operators now also offer E-tickets via an app.

Many of the above types of tickets will need to be validated before you can enter the train. In some cities, you can buy single tickets in batches in advance, so they need to be stamped with the date of use in order to be valid.

If you are required to validate your ticket it will be printed with something along the lines of “Bitte entwerten” (please validate). To validate it, push your ticket into the slot of one of the validator machines (Entwerter), which you can usually find next to the ticket machines or on the station platform.

The public transport network in Germany operates on an honesty principle, so you won’t find any ticket barriers. There is usually nothing to prevent you from boarding an S-Bahn or U-Bahn without a valid ticket (known as “schwarzfahren” - to travel black / fare-dodge), but if you are caught by an inspector you risk being fined up to 60 euros.