Tracht: A guide to traditional clothing in Germany

Tracht: A guide to traditional clothing in Germany

If you’ve ever been to a Oktoberfest – or any other typical German celebration, for that matter – you’ve probably come across these three essentials: top-notch German beer, delicious German food and most importantly, strikingly colourful, traditional German outfits.

Collectively known as Tracht, these outfits – which first appeared in the 18th and 19th centuries – initially served the purpose of indicating one’s social class. Although the word is primarily associated with traditional garments worn in Bavaria, Austria, South Tyrol and Trentino, nowadays they are worn by people all over the country – regardless of age, ethnicity, religion or social status – as a symbol of German culture and pride.

So what exactly makes a Tracht? How is it worn and where did it come from?

Clothing for women: the Dirndl

The best-known traditional outfit worn by women in (southern) Germany - the Frauentracht - is the Dirndl. A Dirndl is a women’s dress, consisting of four main components: a bodice (connected at the front), a skirt, a shirt (worn underneath the bodice) and an apron (worn at the front, on top of the skirt). 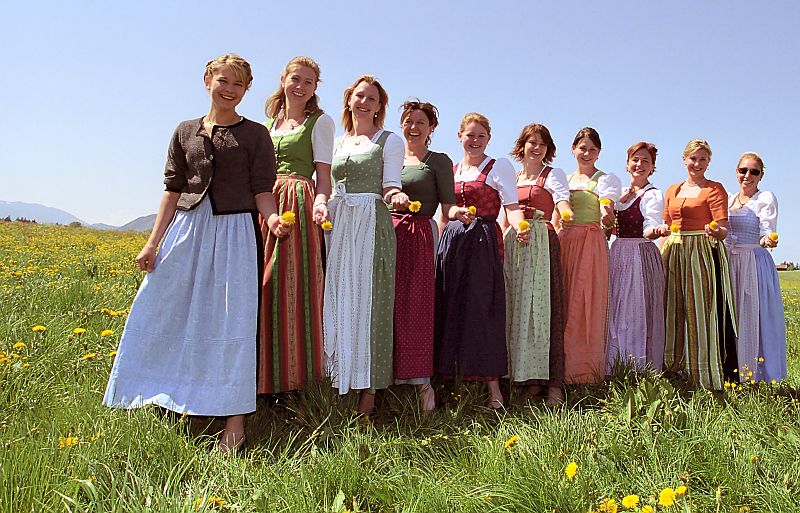 The Dirndl was initially created as a hardy outfit for servants and peasant women, and was made of soft, breathable and easily washable material. Later, under the influence of two Jewish designers known as the Wallach brothers, this hardy outfit transformed into a fancy, stylish and flattering one, made of expensive materials and designed to be shown off by the aristocracy.

Although mostly similar in basic structure, the style and flourishes of the Dirndl varied somewhat from region to region. The Frisian Tracht, for instance, had one of the most distinctive styles in northern Germany. Worn to show off the wealth of one’s family, it was elaborate and opulent, ornamented with jewellery, metals and other expensive materials.

Although the Dirndl lost much of its popularity after the Second World War, today it is once again a favourite outfit at traditional German festivals and other special occasions - especially in southern Germany - and is worn as symbol of national culture and pride. 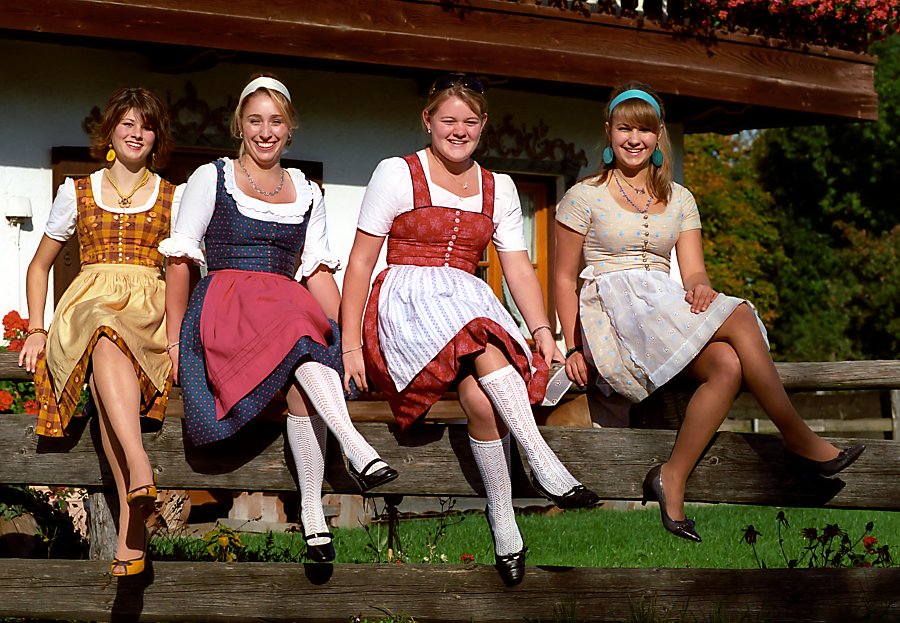 In the case of traditional outfits for men in Germany, the most well-known item of clothing is the Lederhosen. Lederhosen, literally translating to “leather trousers”, refers to trousers that were traditionally made out of tanned deer leather.

Originally worn by hunters, riders and others involved in outdoor activities, this kind of leather met the requirements of hard physical labour by being more durable than regular fabric. Thus, Lederhosen were extremely valuable and often passed on from generation to generation.

Nowadays, Lederhosen are also made from many different (and cheaper) kinds of leather and substitutes, although this often means that durability has to be compromised. 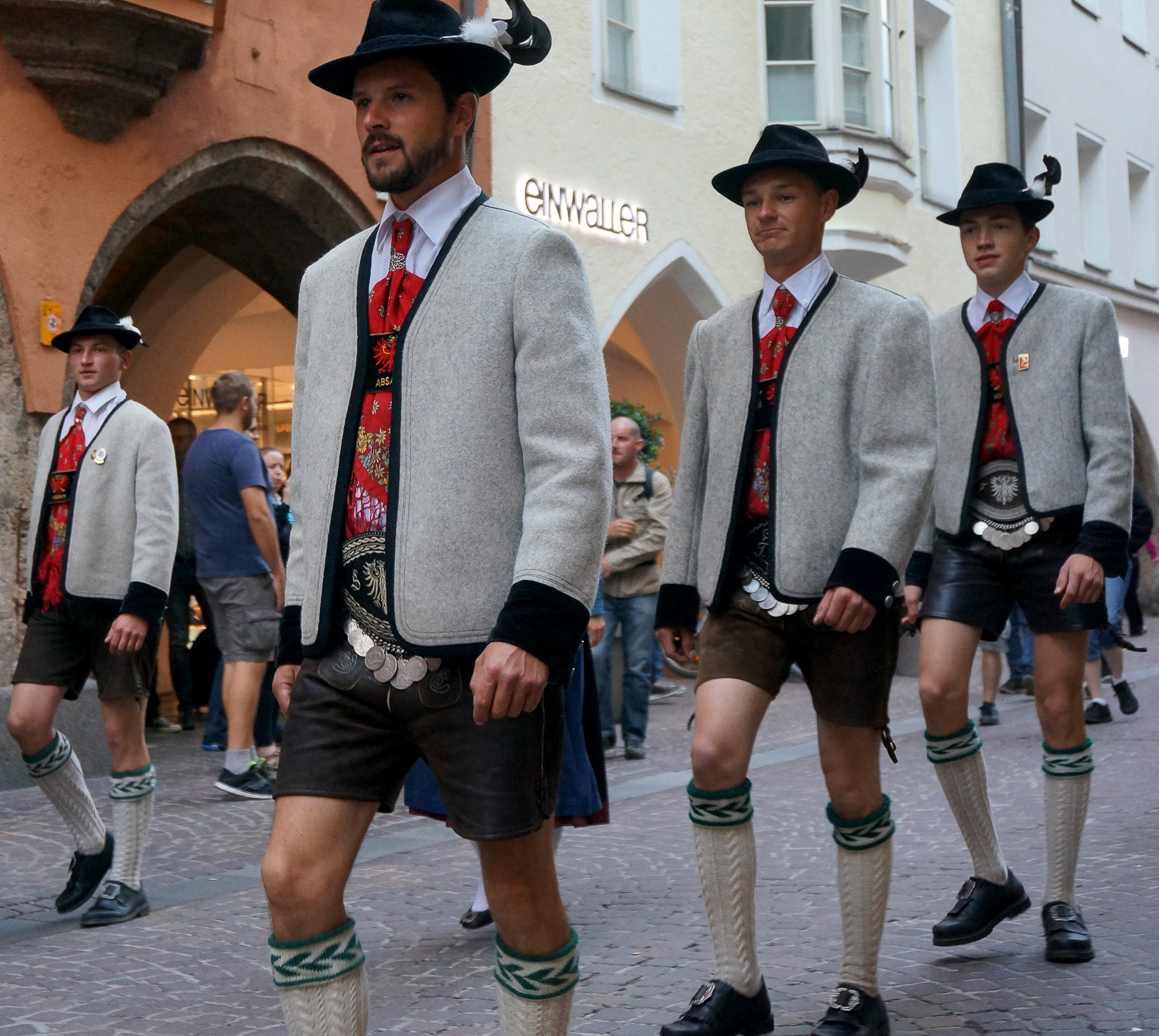 Although the leather trousers are the main component of a traditional male Tracht, the complete outfit usually also consists of a classic shirt (usually white or checked) or a sweater made of linen or wool, suspenders, wool stockings, a jacket, a hat and country shoes.

Of course, this basic style varies regionally. Bavaria, probably the state best-known for Lederhosen, flaunts its own unique style that combines suspenders, front flaps, numerous pockets, and an oddly shaped, hanging front piece known as a codpiece or a dropped front.

The length of Lederhosen can also vary widely. Above the knee shorts are often worn by young boys, while older men may done mid-calf or full-length varieties. 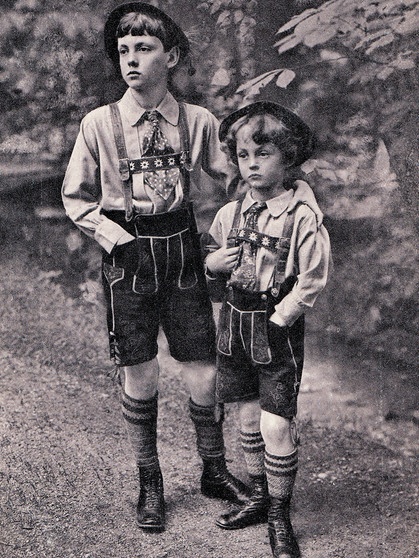 In contrast to the Dirndl's growing popularity among the aristocracy during the 19th century, Lederhosen began to be seen as uncultured peasant garments, unfit to be worn by dwellers of major German cities. For a long time it fell out of favour, but more recently has begun to be re-embraced, especially in Bavaria - not just as a novelty item, but as a symbol of German and Bavarian pride.

In the past, Tracht were typically accessorised with a fancy hat - which had the twin advantage of protecting one's face from the sun while also parading one's fashion sense. For men in southern Germany especially, this was usually a traditional Alpine hat made of felt or wool, with a brim that encircled the head.

Depending on the region, however, these hats were also spiced up with a variety of colourful accessories, such as feathers, flowers, ribbons and bristles. 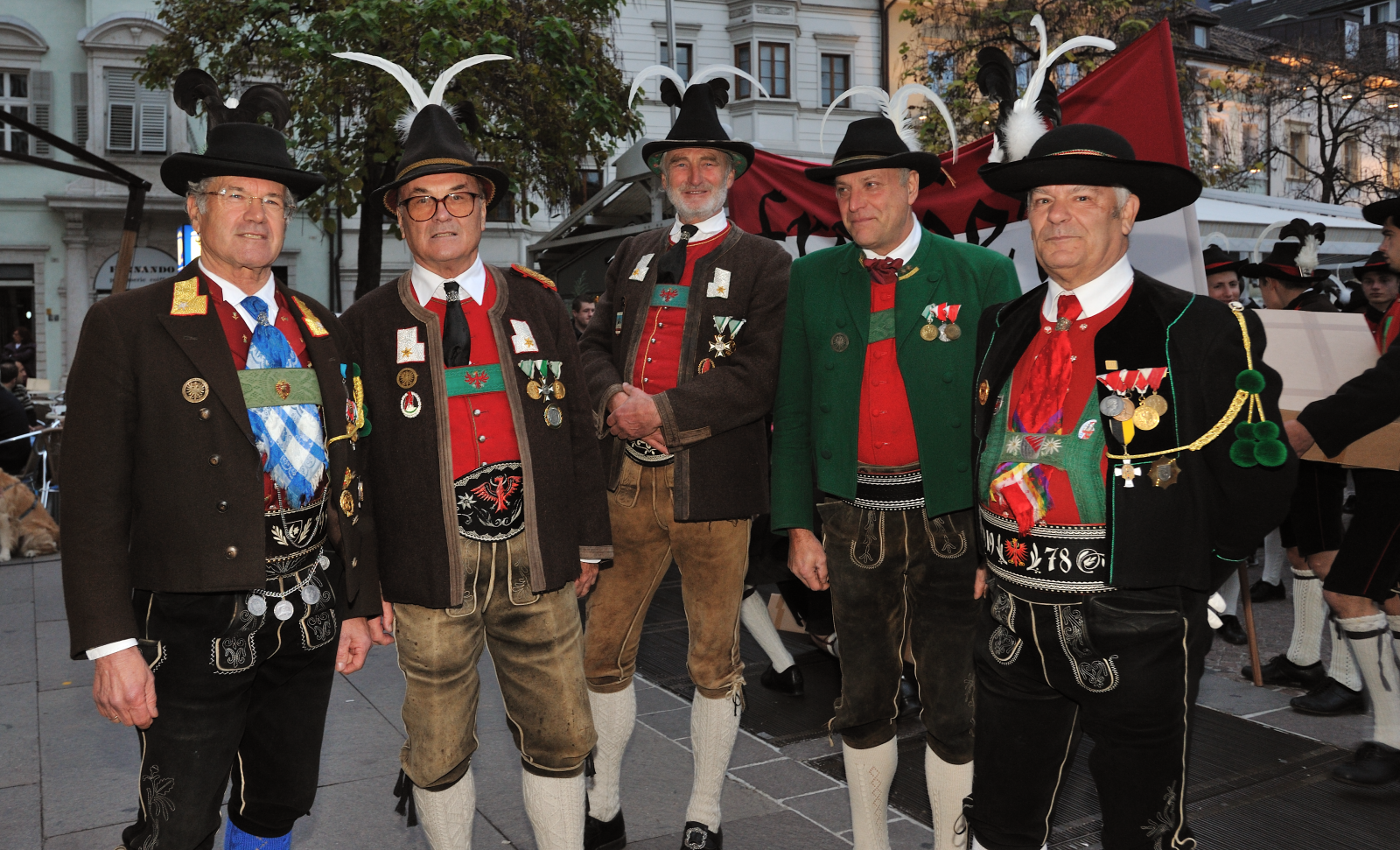 A particularly interesting and vivid hat was - and still sometimes is - worn by Protestant women in the Black Forest villages of Kirnbach, Gutach and Hornberg-Reichenbach. Known as the Bollenhut, it is a formal, wide brimmed straw hat topped with 14 woollen pom-poms, weighing up to a total of two kilograms. Women who are married wear black pom-poms, while those who are unmarried wear bright red. 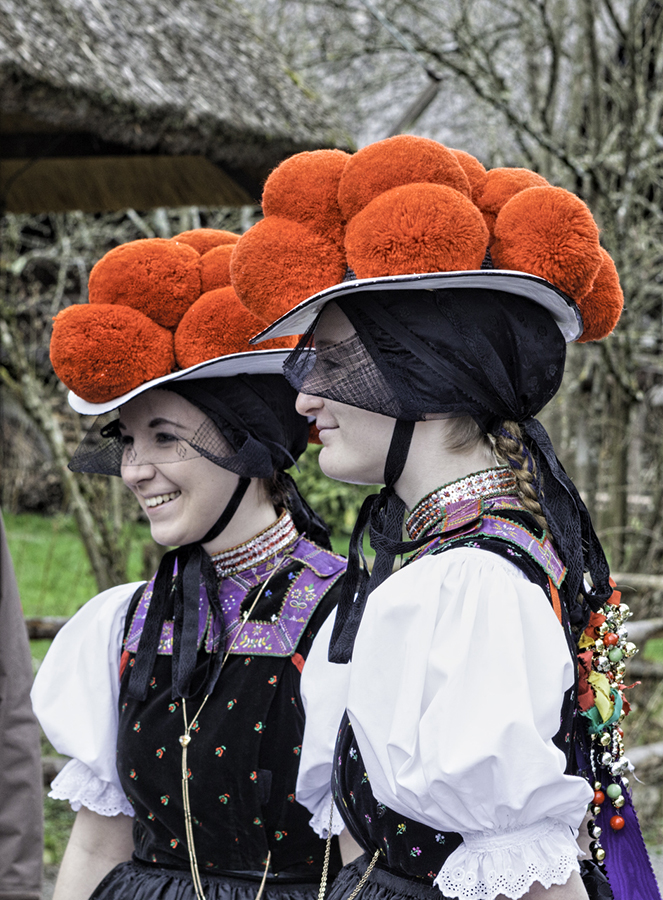 With the large amount of dancing that accompanies any festivity requiring a Tracht, it is extremely important that you have on the right kind of shoes. Women usually adorn a soft, felt shoe with a clunky heel and buckles - perfect for an evening of dancing.

For the men, a special shoe known as the Haferlschuh is preferred. Originally intended for farming in Bavaria, this shoe contains a sole made of thick leather or rubber and is based on the design of an animal hoof. In the past, men took great pride in handcrafting their own Haferlschuhe, but nowadays you can get them from plenty of traditional shoe shops.

What about when it gets cold?

If you've been paying close attention, you might have noticed that all the outfits we've discussed so far seem to be designed for warm weather. Thin cotton shirts, leather shorts and frilly hats might not be the optimal choice for the colder parts of the year.

Fortunately, Germans have a solution for that! During winter, women wear a heavy Dirndl coat in the same cut as the dress. Instead of light materials such as cotton and silk, these feature skirts and aprons made of thick cotton, linen, velvet or wool. The shirts have long sleeves and high necks, and the dress is accompanied by thick mittens and wool hats.

For the men, there is a wide range of wool vests and cardigans that replace the thin cotton and linen shirts. Some men opt for smart blazers instead, but these are usually more expensive. This is, of course, accompanied by thicker socks, hats and sometimes gloves.