The landlocked free state of Bavaria is the largest German federal state, covering approximately one-fifth of the country’s entire land area. As well as sharing a border with Austria and Switzerland, it neighbours the states of Thuringia, Saxony, Baden-Württemberg and Hesse. It is the second-most populous state in Germany, after North Rhine-Westphalia.

A brief history of Bavaria

One of the oldest states in Europe, the history of Bavaria can be traced all the way back to the 6th century when the old stem duchy of Baiern was established as part of the Kingdom of the Franks in 555 AD. The area had previously been inhabited by the Celts and later a province of the Roman Empire before it succumbed to repeated attacks from Germanic tribes, including the one that would eventually give the region its name: the Baiovarii.

After a short stint as part of the Carolingian Empire, Bavaria became a part of the Holy Roman Empire in the 10th century. In 1180, Emperor Frederick I Barbarossa gave Bavaria to Count Otto of Wittelsbach. This marked the start of the Wittelsbach dynasty, which would rule Bavaria for the next 700 years. The white and blue checks from the Wittelsbach coat of arms appear on the Bavarian state flag to this day.

When the Napoleonic Wars finally brought the Holy Roman Empire to an end in 1806, Bavaria was made into a kingdom. It did rather well out of the victorious Napoleon’s remapping of Europe - nearly doubling its size with the acquisition of Franconia and Swabia - only to turn its back on the emperor during the Franco-Prussian war to fight alongside Prussia and several other German states. This new “North German Federation” would, in 1871, become the German Empire (Deutsches Reich).

Bavaria’s decision to join the German Empire was considered controversial by the Bavarian nationalist faction, who wanted the state to retain its independence and, as staunch Catholics, resented being - as they saw it -  ruled by Protestant Prussians. This strong emphasis on Bavaria’s separate national identity continues to this day.

A hotbed of extremism

After a Communist revolt established a short-lived, violently-suppressed Bavarian Soviet Republic, in August 1919, the Bamberg Constitution created the Free State of Bavaria in the Weimar Republic. This did not, however, end extremist activity in the state, as Bavaria as a whole, and particularly the cities of Munich and Nuremberg, came to be seen as Nazi strongholds during Adolf Hitler’s Third Reich.

In 1949, Bavaria was the only state to not ratify the Basic Law, on the grounds that it put unacceptable limitations on state powers. It did, however, agree to honour and abide by it. In the years since the war, Bavaria has undergone the most successful economic transformation of any German state, shedding its past as an agricultural producer to embrace modern technology and high-tech engineering, which nowadays coexist with Bavaria’s fiercely-protected traditions and cultural customs.

Like much of southern Germany, Bavaria is a hilly state of high plateaus and medium-sized mountains that climb south towards the Bavarian Alps and Germany’s highest point, the 2.962-metre mountain known as “Zugspitze”.

The state can roughly be divided into four major regions: the Alps, which form a natural border with Austria; the Alpine foothills, famous for their numerous lakes and ski resorts; the Eastern Bavarian central mountains, home to the first-ever national park in Germany; and the colourful hills of Swabia-Franconia. The major rivers that cut through Bavaria are the Danube and the Main.

Bavaria has a continental climate that is quite harsh for middle Europe, with significant annual variations in temperature and distinct seasons. From May to September, the weather in Bavaria is mostly sunny and pleasantly warm, with temperatures between 20 and 30 degrees, perfect for relaxing in the shade at a traditional beer garden. Between November and February, it gets a lot cooler, ranging between three and minus one degrees.

Several dialects are spoken in Bavaria, all of them belonging to a group of languages known as “Upper German languages”. The most commonly-spoken regional dialects in Bavaria include Franconian, Swabian (an Alemannic dialect) and Bavarian (Bayerisch).

Bavarian itself can be divided into three main dialect groups: Northern Bavarian, Central Bavarian and Southern Bavarian. It is also spoken in parts of Austria, Italy, Switzerland and Hungary. While Bavarian is spoken by many as a first language at home, teaching at primary and secondary schools usually is in High German.

Steeped in history and tradition, with a generous helping of warm-spirited fun, Bavaria is home to some of the best cities in Germany.

The capital of Bavaria is so much more than just the home of Oktoberfest. Tradition and modernity jostle playfully for position in this city of culture, classical architecture and cutting-edge business. Munich is repeatedly named one of the top cities in the world for quality of life and is home to one of the largest expat populations in Germany.

Despite being the site of the infamous Nazi rallies and post-war trials, Nuremberg is by no means defined by them. Instead, this energetic city exerts a magnetic pull with its charming toys, picture-postcard architecture and world-famous Christmas market.

With a history dating all the way back to its foundation by the Romans in 15 BC, Augsburg is the oldest city in Bavaria. Besides being the largest city on one of Bavaria’s biggest tourist pulls, the Romantic Road, it is also world-renowned for its handsome Renaissance-era architecture.

This former capital of Bavaria has two thousand years of history under its belt and some of the region’s finest architecture hidden in its tangled city streets, a fact recognised in 2006 when Regensburg’s entire old town was designated a UNESCO World Heritage Site.

For centuries, this laid-back university city was home to the prince-bishops of the Holy Roman Empire, who left behind the wealth of Baroque art and architecture that make Würzburg one of the highlights of Bavaria.

So close to Nuremberg that the two cities are practically touching, Fürth was left largely undamaged by the Second World War bombing that decimated its neighbour. It thus remains a treasure trove of winding streets and medieval architecture and was also the starting point for the first-ever train to run in Germany.

This city has been affectionately dubbed the “Franconian Berkeley” for obvious reasons. It’s also the home of the famous Erlanger Bergkirchweih, one of the oldest folk fairs in Germany that attracts over a million visitors each year.

From Franconian Berkeley to Franconian Rome. This unmissable gem was built over seven hills and has such a stunningly well-preserved Altstadt that the entire city centre has been designated a UNESCO World Heritage Site. It’s worth visiting for the unique smoked beer alone.

Even in its own right, Bayreuth is a pretty town of baroque architecture and opulent palaces. But it’s the Wagner connection that provides its primary attraction - around 60.000 devotees descend on the city each summer for the Bayreuth Festival.

It should come as no surprise that, like most traditional German food, Bavarian cuisine is hearty and filling and characterised by a proliferation of meat and potato-based dishes. Indeed, plenty of dishes that are considered to be typically German actually hail from Bavaria.

Some regional specialities that you simply have to try include Weisswurst (white sausage made from veal and bacon), Schweinshaxe (roasted ham hock), Knödel (dumplings made from potato or bread that come in multiple varieties) and Käsespätzle (everyone’s favourite - thick pasta noodles baked in cheese and onion).

As with many other places worldwide, food in Bavaria is never just about the eating; it’s part of a lively culture that covers everything from socialising and merrymaking to music and dancing. And, of course, beer should never be far from the table - Bavaria has a long and proud history of brewing, with Franconia having the highest density of brewers anywhere in the world. Weißbier, Dunkles and Helles are some of the most popular types of beer in Bavaria.

Bavaria is so packed full of magical forests, medieval towns, fairytale castles and cosy beer halls that you couldn’t possibly hope to cover them all, even with a year of long weekends. Here are some sights and attractions that should be right at the top of your list.

This is one of those places where the pictures simply don’t do it justice. Hike through stunning lakes and mountains to the eerily beautiful, emerald-green Lake Königssee, the jewel of the Bavarian Alps.

Just because something’s popular with the tourists doesn’t mean it’s not good. This fabulous 350-kilometre route stretches between Würzburg and Füssen and is a glorious, rip-roaring ride through stunning countryside, picturesque medieval towns and romantic castles.

You can’t go to Bavaria and not visit Schloss Neuschwanstein, the model for Disney’s Sleeping Beauty Castle and probably the most famous of all castles in Germany. Granted, it’s difficult to get to the vantage point where all the best photos are taken, but a wander around the grounds and the spectacularly bonkers interior is well worth the trip.

The largest lake in Bavaria, the 80-square-kilometre Chiemsee, has tides like the sea and contains three islands, one of which comes complete with its own miniature Versailles palace. Steep mountainsides, clear blue water and some of the best restaurants in Bavaria - what’s not to like?

Officially, there are two variants of the flag of Bavaria - the striped version and the lozenge version, both of which are the same blue and white. These colours come from the coat of arms of the Wittelsbach family, who ruled Bavaria between 1180 and 1918. 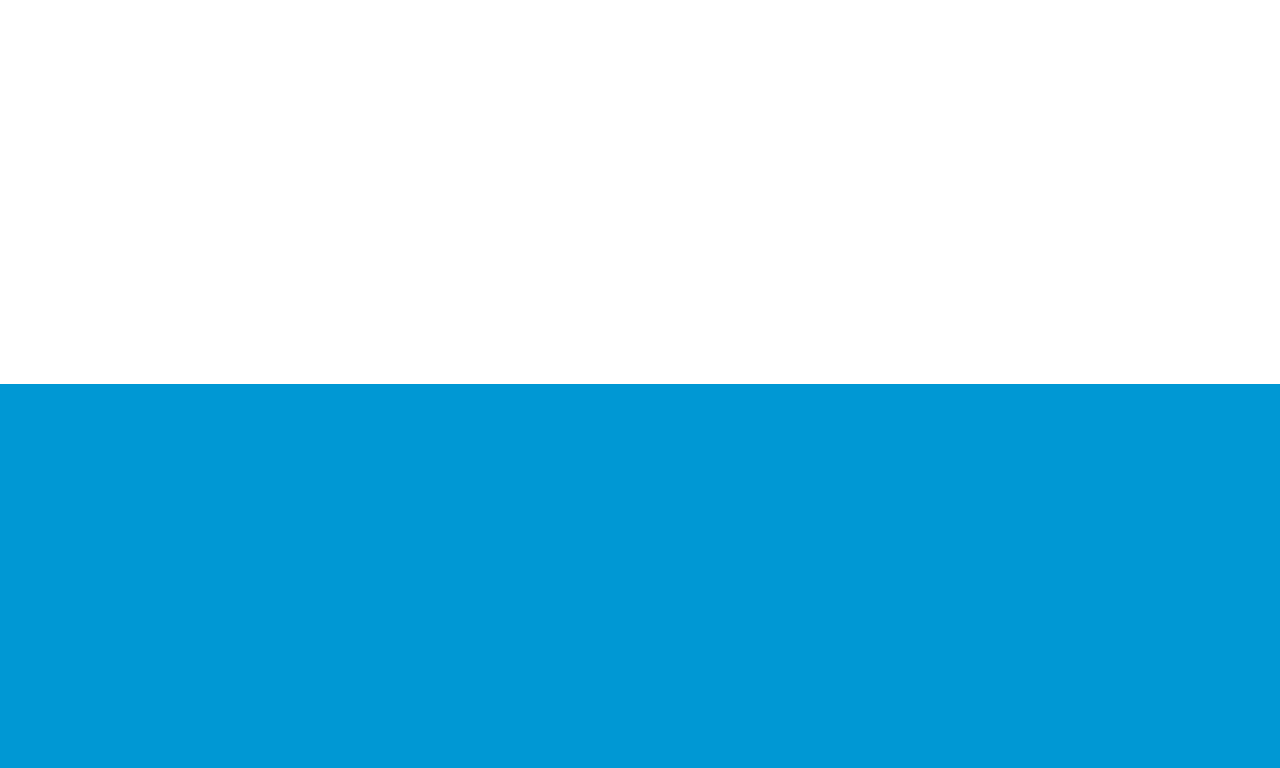 Where the lozenges (a diamond check) are used, tradition dictates that there must be at least 21 of them and that the top left lozenge on the flag must be white. Although no one is entirely in agreement, the lozenges are thought to represent Bavaria’s multiple lakes and rivers, or perhaps even the sky. 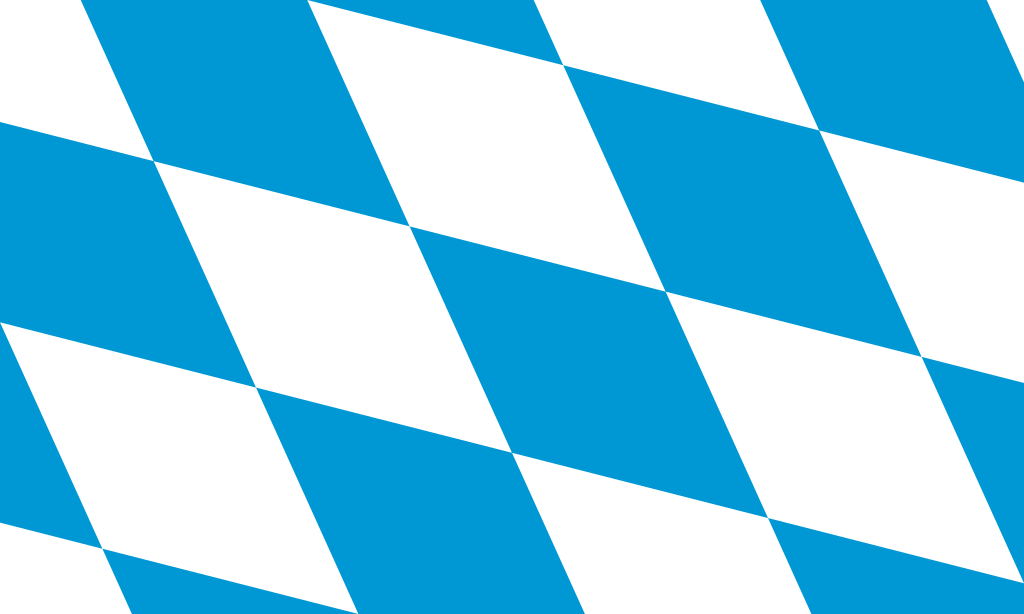