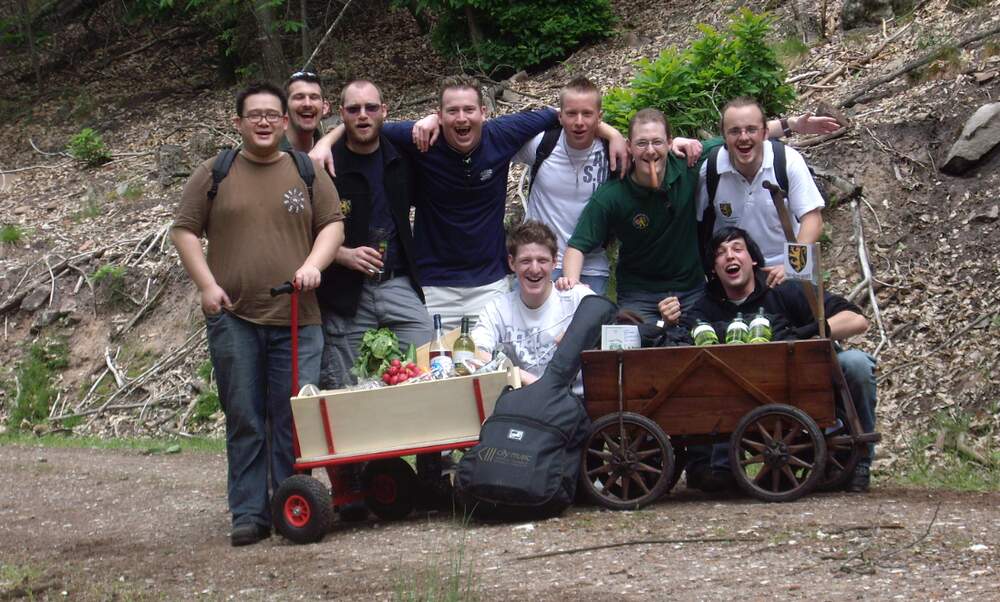 Why is Ascension Day in Germany all about the dads?

Why is Ascension Day in Germany all about the dads?

From a solemn religious observance to a great excuse to have a tipple with the other dads, Ascension Day (Himmelfahrt) celebrations in Germany have changed a lot over the years. We take a look at the history of this little-known public holiday.

A brief history of Ascension Day in Germany

It might not be widely celebrated outside Germany and a handful of other countries, but in the federal republic Himmelfahrt means a day off for everyone, which is in itself more than enough cause for celebration. As the name suggests, Ascension Day marks the day Jesus ascended into heaven, having spent the forty days after his resurrection travelling and preaching with his disciples. Therefore, it always falls on the sixth Thursday after Easter, exactly forty days after Easter Sunday.

Ascension Day has been celebrated in Germany since at least the 4th century, historically being marked by processions with torches and banners. In some more rural areas of southern Germany, this custom continues to the present day, as villagers gather in traditional costumes, hoist banners and attend religious services.

Over time, however, Ascension Day has morphed into an entirely different celebration - Father’s Day, or Men’s Day (Vatertag or Männertag). Originating in the 18th century, this custom is based on the idea that Jesus’ ascension marked his return to his father in heaven. To mark the occasion, tradition dictated that all the men would be placed in carts and trundled into the centre of town. The man who had fathered the most children would then be presented with a prize by the mayor - usually a large chunk of ham.

With the decline of the importance of religion towards the turn of the 20th century, celebrations gradually transformed into an exercise in “manliness”, as groups of men took to hiking, smoking and picnicking on ham and beer in the German countryside.

Männertag: A day of “boozing and brawling”

By the early 20th century, however, all memory of ham was lost as German beer culture took over the festivities. It became customary for men to gather in groups, sometimes embarking on local day trips, but mostly just wandering around town fuelled by a healthy supply of booze. Father’s Day celebrations of this type have continued to dominate right up into the present day, with the religious significance of the holiday largely forgotten.

Nowadays, on Ascension Day / Father’s Day, you will see groups of men in costume gathering together to engage in a good spot of drinking. Sometimes they go on day trips as well, but most of the time they’re too busy necking Steins. The association with alcohol has become so strong that many Germans refer to it as the day of “boozing and brawling” - a reference to the perception that things sometimes get a little out of hand.

Indeed, every year Männertag sees a 300 percent spike in the number of alcohol-related traffic incidents. The police and emergency services are always on high alert, as there are a far higher than normal incidences of street fights, pub brawls and general drunken behaviour.

Coronavirus restrictions mean that this year's Ascension Day won't be what we're used to - but it's a nice excuse to spend the day with family. Indeed, if previous years are anything to go by, it's probably safer to stay inside...