North Rhine-Westphalia (Nordrhein-Westfalen) is a federal state in western Germany. It is bordered by Lower Saxony to the north and northeast, Hesse to the east and Rhineland-Palatinate to the south. It also shares a border with Belgium and the Netherlands. It is the most populous state in Germany and the fourth-largest by area.

A brief history of North Rhine-Westphalia

As the name suggests, North Rhine-Westphalia is the product of an artificial binding of two culturally-distinct regions: Westphalia and the northern part of the Rhine Province. While human inhabitation of the area can be traced back to prehistoric times (the Neanderthal was discovered just outside Düsseldorf), the first written record appears in the account of Julius Caesar, who conquered the territories west of the Rhine and established numerous fortified posts there.

Kings of the Germans

By the time of Otto I, the Rhineland had become part of the Holy Roman Empire, and in 1180 Westphalia was also elevated to the rank of Duchy by Emperor Barbarossa. The area achieved special significance within the Empire since the city of Aachen was where 31 Holy Roman Emperors were crowned Kings of the Germans.

Over time, as the central power of the Holy Roman Empire weakened, both the Rhineland and Westphalia split into numerous smaller territories, which prospered independently and retained their position as centres of German culture and progress, until eventually coming under the control of Prussia in the aftermath of the French Revolution and Napoleonic Wars.

According to the terms of the 1919 Treaty of Versailles, Allied forces occupied the Rhineland. In 1936, in violation of the Treaty, Hitler ordered German troops to re-enter the demilitarised zone, setting off a chain reaction that would ultimately provoke the outbreak of another world conflict.

The area was once again occupied by Allied military forces after Germany’s defeat in World War II, and on August 23, 1946, North Rhine-Westphalia was officially created by merging the former Prussian Rhine Province with Westphalia. The new state was joined a few months later by the territory of Lippe.

The road to recovery

Heavy industry had traditionally been the core of the area’s economy, and now it was needed more than ever to rebuild North Rhine-Westphalia. The “Economic Miracle” of the 1950s paved the road to recovery, helped by the influx of millions of immigrant workers and the area experienced a brief period of renewed prosperity before rising costs and declining competitiveness forced the region to undergo some painful structural changes.

Gradually, North Rhine-Westphalia’s heavy industries of raw steel, coal and heavy machinery gave way to a focus on high technology and the service industries. The region is now home to some of Germany’s top corporations, as well as some major international companies, and has the most foreign direct investments of anywhere in Germany.

Covering an entire area of 34.083 kilometres squared, North Rhine-Westphalia stretches from the low-lying terrain of the North, towards the hill ranges of Germany’s Central Uplands. Although the state is practically synonymous with industry and large cities, 52 percent of its land surface is turned over to agriculture, and a further quarter is covered with forest.

Its proximity to the North Sea makes the climate in North Rhine-Westphalia, especially in the lowland zones, mild. The average mean temperature in January is around 1 degree and in July around 17 degrees. The weather is generally quite dry around the Rhine Valley, while the mountainous regions are cool and wet. The wettest month of the year, on average, is June.

Variations of a West Central German dialect known as Ripuarian are spoken in some of the biggest cities in North Rhine-Westphalia. Kölsch, the dialect of Cologne, is probably the most famous, but other varieties are spoken in Aachen (Ӧcher Platt), Bonn (Bönnsch Platt) and Düsseldorf (Düsseldorfer Platt).

Perhaps unsurprisingly for Germany’s most densely-populated state, North Rhine-Westphalia features 30 of the 81 German cities with more than 100.000 inhabitants. Among them are:

The fashion and media capital of Germany as well as the state capital of North Rhine-Westphalia, Düsseldorf is a lively, modern city famous for its avant-garde architecture and buzzing nightlife. As well as some major head offices, the city is also home to the largest Japanese population in Germany.

Germany’s “oldest city” is known for its laid-back, liberal culture, not to mention its iconic cathedral. With a fascinating history stretching all the way back to Roman times, a friendly local population and one of the best Carnivals around, Cologne really does have something for everyone.

It might not be winning any beauty contests in the near future, but Dortmund is world-famous for two things: beer and football. For those who wouldn’t be fussed about a visit to the German Football Museum, Dortmund also hosts an impressive lineup of cultural attractions and a surprisingly strong startup scene.

It took a little while, but Essen has transformed from a gritty centre of coal and steel manufacturing to the region’s cultural powerhouse, boasting an impressive lineup of museums and galleries, some great nightlife and a charming medieval quarter, all ringed by a lush belt of greenery.

Luckily, Bonn retained its lively vibe when the capital upsticked and returned to Berlin after German Reunification. This was thanks in part to the city’s connection to Ludwig van Beethoven, whose legacy is peppered across the city.

Expats love Aachen, a former Roman spa (and the preferred residence of Charlemagne) that is nowadays famous for its unique culture, the product of its location on the “three lands corner” between Germany, Belgium and the Netherlands.

This former industrial centre is certainly not pretty, but what it lacks in beauty it more than makes up for in soul, with a huge university, great nightlife and an extensive green belt.

Home to Europe’s largest inland port, Duisburg is the fifth-largest city in North Rhine-Westphalia and produces half of all the pig iron made in Germany. As well as being an important centre for steel production, Duisburg boasts a lively inner city and one of the biggest universities in Germany.

Historic Münster is known for being one of the most bike-friendly cities in Germany, as well as home to a slew of cultural treasures and one of the best-loved duos on the famous detective show Tatort.

Less of a city than an amalgamation of towns that were united in 1929 (making this one of Germany’s younger cities), Wuppertal is known internationally for its unique suspended monorail system and for being the place where aspirin was invented.

Like much of German cuisine, traditional fare in North Rhine-Westphalia can accurately be described as “hearty and substantial”, characterised by a heavy emphasis on meat and sausage dishes. As in plenty of other regions in Germany, potatoes are the preferred side dish, with Himmel un Ääd (Heaven and Earth - a combination of mashed potatoes and apple puree) being a particular Rhineland favourite.

Typical regional specialities that you’re likely to see on menus in North Rhine-Westphalia include Rheinischer Sauerbraten (marinated pot roast), Pfefferpotthast (a kind of peppery stew, usually made with beef, lard and onions) and Reiberkuchen (a type of potato cake). The typical bread in Westphalia is pumpernickel, a very dense, dark bread made with just rye and water and baked in a steam-filled oven.

If you’re stopping in North Rhine-Westphalia, be sure to cross these sights and attractions off your list of things to do.

Linked by an avenue running through a spectacularly sculpted park, the Augustusburg Castle and the Falkenlust Hunting Lodge were sumptuous residences used by the Prince-Archbishops of Cologne. These palaces were designated UNESCO World Heritage Sites in 1984.

Once the largest coal mine in the world, the sprawling, jaw-dropping Zollverein Mine Industrial Complex has undergone a major transformation to become a prime cultural centre, with museums, performance spaces, artists’ studios, cafes and restaurants. During the summer months, it hosts a number of events, including concerts, open-air cinemas and even a gourmet festival.

Connecting North Rhine-Westphalia, Rhineland-Palatinate and Belgium, this untamed stretch of wilderness is one of the 16 national parks in Germany. Its dramatic landscape, peppered with dark blue lakes, forested mountain ranges and glades of wild daffodils, is home to wild cats, black stalks and nearly 2.000 other endangered species.

See Roman history come to life at the APX! Set on the site of the ancient Roman city of Colonia Ulpa Traiana. Germany’s biggest open-air archaeological museum lets you get up close and personal with the Romans with their life-size replica buildings and fun, interactive exhibits.

These giant, pillar-like rock formations have been standing in the Teutoburg Forest since the Ice Age and are one of the most impressive natural monuments in the whole of Germany, hypnotising everyone from early medieval Christians to present-day Neo-Pagans.

The tricolour flag of North-Rhine Westphalia was first introduced in 1948, but not officially adopted until 1953. It is a combination of the two former Prussian provinces: the Rhine Province (which had a green and white tricolour) and Westphalia (which had a white and red tricolour).

The civil flag is a plain green, white and red tricolour. 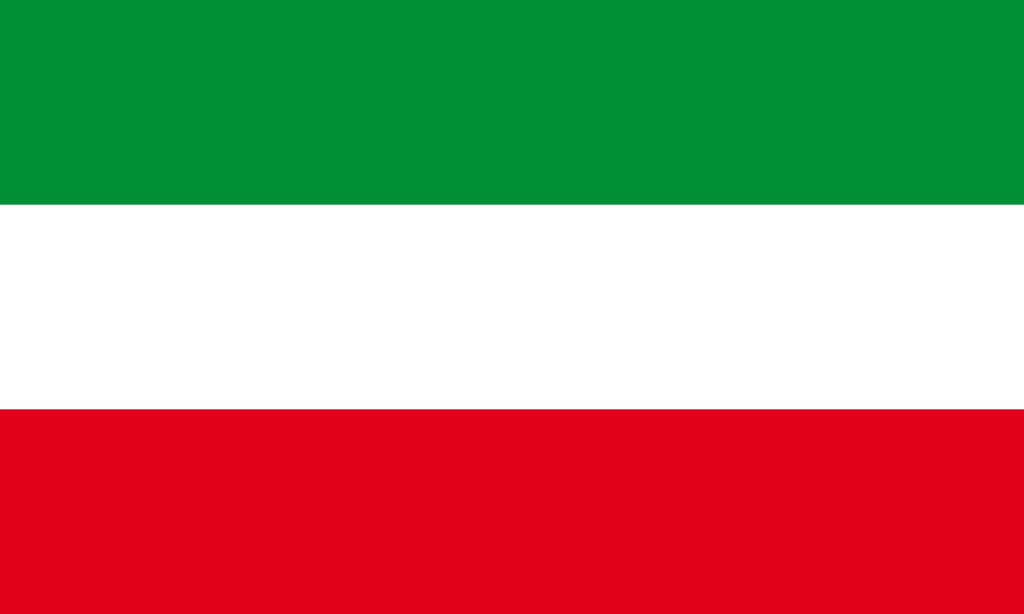 There is also a state flag for North Rhine-Westphalia, defaced with the state’s coat of arms. 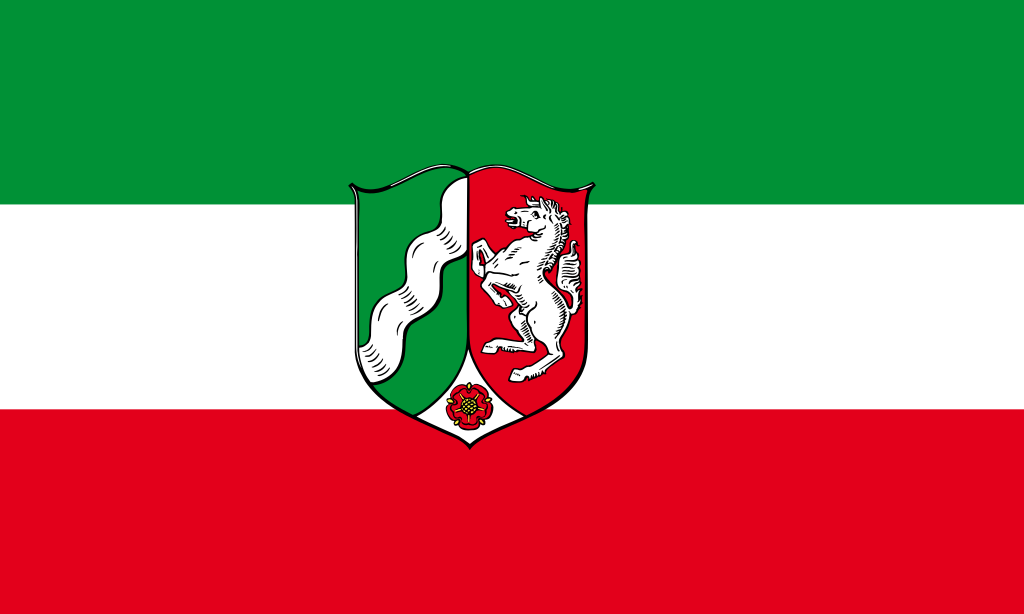