Germany - officially the Federal Republic of Germany - is, as the name suggests, a federal republic made up of 16 sovereign states (Länder or, informally, Bundesländer). Each has its own unique characteristics, landscape and culture.

Since the German nation state is a relatively recent formation - created in the mid- to late-19th century from the unification of several disparate states - it has a federal constitution, and its constituent states still retain a measure of independence.

Most states are governed by a cabinet led by a State Premier (Ministerpräsident), together with a legislative body known as the Landtag. Landtag representatives are chosen every four or five years (depending on the state) in state elections. The State Premier is selected by a majority vote of Landtag members. Each state then delegates a number of representatives to send to the Bundesrat, Germany’s “upper house” of parliament.

While certain issues, such as defence and foreign affairs, are the exclusive responsibility of the federal government, others are shared between the states and the federation. However, Germany’s Basic Law also enshrines each state’s right to retain legislative authority over some areas, including culture, education and job training. This explains why, for example, the school system differs significantly from state to state.

The 16 federal states of Germany

Since German Reunification, there have been 16 federal states in Germany, each one of them unique. It’s not just local habits, regional cuisine and cultural quirks that set these states apart - they also look noticeably different, ranging from windswept, white sand beaches in Schleswig-Holstein to rolling, forested Alpine foothills in Bavaria.

The map below shows where each of Germany’s states is situated within the country: 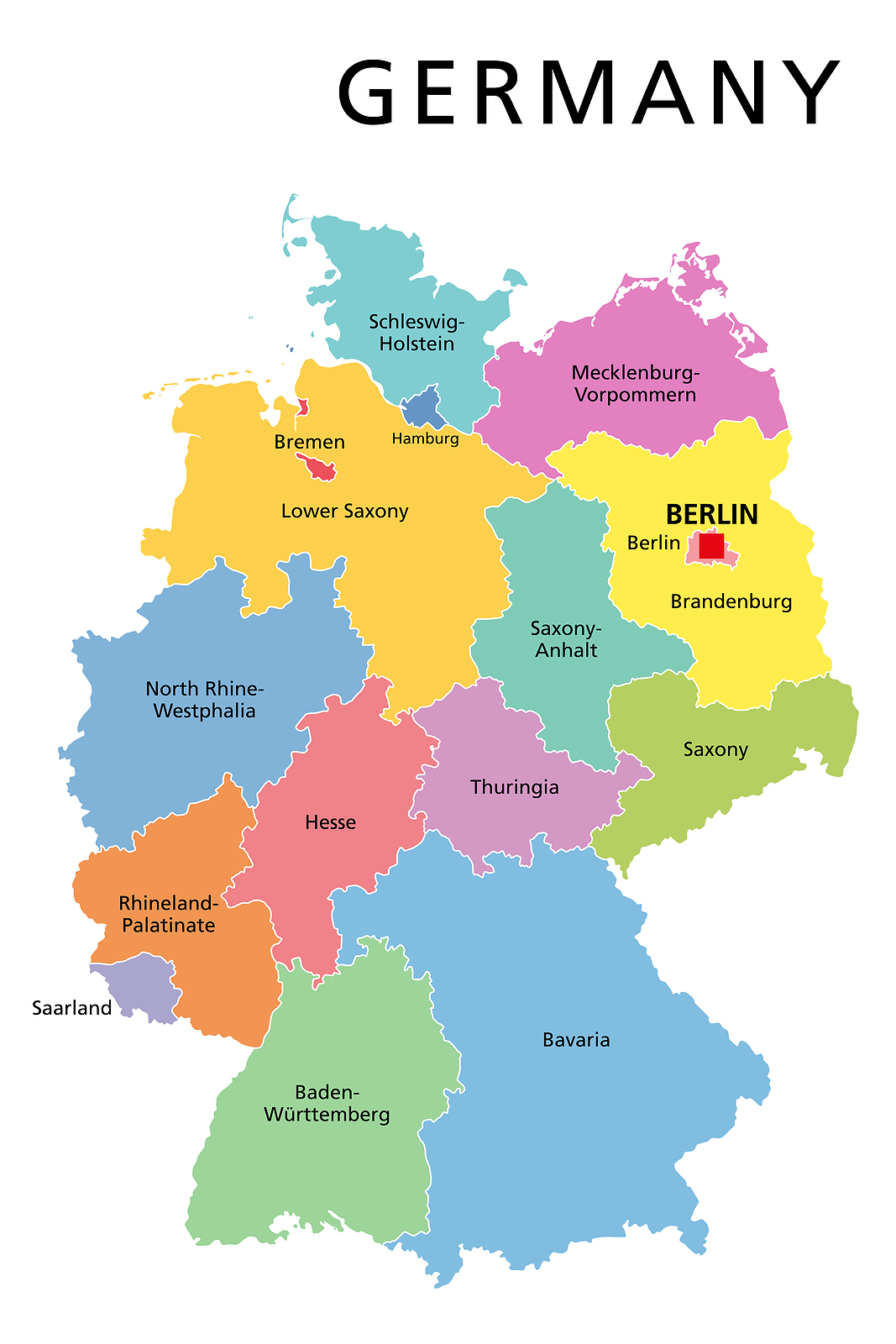 If you want to dive in a little deeper to each state’s unique history, geography, cities, dialects, food, sights and attractions, we’ve put together the following guides to the federal states of Germany.

The youngest federal state in Germany, Baden-Württemberg only came into being in 1952, but that hasn’t stopped it from racing ahead as the country’s manufacturing powerhouse. Its charming landscape is also incredibly diverse, taking in an abundance of forested uplands, beautiful valleys, magical forests and fairytale castles.

Close your eyes and think of Germany, and you’re probably picturing Bavaria. Tradition is as important to Bavarians as German beer and Lederhosen - and they love nothing more than letting their hair down at a good old Volksfest - but this state is also a thrumming hive of industry, famous for its output in the automotive, mechanical engineering and electronics sectors.

Since the fall of the Berlin Wall, Germany’s capital city has exerted one of the biggest pulls in Europe. Expats flock to Berlin to make the most of its exciting start-up scene, infamous nightlife and incomparable culture.

Despite what Berliners may say, Brandenburg is so much more than the area that surrounds Germany’s capital. One of the least-densely populated states in the country, it is covered with forests, crisscrossed with canals and nearly 3.000 lakes, making it home to some of the best-preserved wildlife in the whole country.

Germany’s smallest and least populous federal state is actually made up of two territories: the Hanseatic city of Bremen and the exclave seaport Bremerhaven. Bremen has a mercantile history stretching back hundreds of years and to this day sports an impressive collection of museums, galleries and medieval architecture.

Another Hanseatic city and another city state, Hamburg is the second-biggest city in Germany and the second-smallest state. Situated on the River Elbe, just a stone’s throw from the North Sea, Hamburg is a port city with a proud history of seafaring and international trade, attested to by its industrial skyline and passion for pickled herrings.

Down-to-earth Hesse lies in central Germany and is its beating financial heart. It’s also home to the largest airport in Germany, making it a hub for international trade. But that doesn’t mean Hessians don’t know how to let loose; Wiesbaden, the state’s historic capital, is a relaxed spa city of villas and wines.

The second-largest state in Germany by land area, Lower Saxony is bordered by more states than any other and straddles both maritime and mountainous areas. It stretches from the East Frisian islands in the North Sea down to the Harz mountains, passing Hannover and some of the most fertile fields in the whole country.

Rural Mecklenburg-Vorpommern offers 1.943 kilometres of unspoilt coastline, more than 2.000 lakes and countless gleaming white-sand beaches. Unsurprisingly, it’s one of the most popular tourist destinations in Germany.

Germany’s most popular state, North Rhine-Westphalia, has gradually cast off coal and steel to embrace high technology and services. It now boasts the highest-density research network in Europe, and is a firm favourite among expats.

You say, “Rhineland-Palatinate”, we say, “wine”. The western state of Rhineland-Palatinate is famous throughout Germany for its lush landscape of “roots and vines”. It is one of the most forested states and Germany’s leading producer of wine, harvesting two thirds of all the grapes grown in the country.

Germany’s “Little France” can’t quite make its mind up, having changed its “nationality” eight times in the last 200 years. After being passed back and forth between France and Germany for years, Saarland has been firmly part of the federal republic since 1957, although it retains a unique melting pot culture to this day.

Once a great centre of trade and home to “Florence on the Elbe”, Saxony suffered after falling behind the Iron Curtain. It was in this federal state that peaceful protests against the GDR regime began in the late 1980s, eventually spreading to other cities and ultimately toppling the East German government.

Home to the highest concentration of UNESCO World Heritage Sites in Germany, Saxony-Anhalt has gradually made a name for itself as the country’s cultural jewel. Its picturesque river landscape stretches down 303 kilometres of the Elbe River.

Sandy Schleswig-Holstein is the northernmost federal state in Germany, nestled between the North and Baltic Seas. With control over the area disputed until at least the 20th century, the state has a history and culture deeply intertwined with that of Denmark.

The geographical centre of Germany lies within Thuringia, a state with an impressive lineup of cultural and intellectual progeny. Its lush greenery and historical cities make it an especially popular choice among German tourists.