In a country with a history as varied and interesting as Germany’s, it comes as no surprise that there are numerous monuments and memorials scattered all over the place. On this page you will learn about monument culture in Germany and discover some of the country’s most iconic memorial structures.

A brief history of monuments in Germany

Every village, town and city in Germany has its fair share of monuments and memorial sites. Towering over rural landscapes or simply lurking unnoticed in city centres, these structures commemorate some of the country’s brightest and darkest moments. Over time, memorial culture in Germany has undergone a fundamental transformation.

In the 18th and 19th centuries, monuments in Germany tended to focus on grand deeds and great personalities. Classical statues of German “heroes” commemorated the country’s contribution to the Enlightenment, art, science and culture.

Following the founding of the German Empire in 1871 and its victory in the Franco-German War, a wave of “monument mania” overtook the fledgling nation. As a means to create national identity and express national pride, great numbers of self-congratulatory, bombastic victors’ monuments sprang up all over the country.

From monuments to memorials

In the aftermath of the two world wars, however, the character of German monuments began to change. It was no longer deemed necessary, or even appropriate, for Germany to congratulate itself. Instead, the war-shattered country needed to come to terms with its past. Over time, commemorative culture began to change, as symbols of national pride and military might were replaced with memorials that warned against the perils of nationalism and war.

In a way that would be unthinkable in many other countries, Germany has continued to make a concerted effort to display its own shame, failure and defeat through memorials that commemorate and document the actions of the Nazis, the SED, and the Stasi. Instead of flaunting national pride, such memorials are intended to educate.

There are so many thought-provoking and awe-inspiring monuments in Germany, it would be impossible to list them all. Instead, here is an overview of some of the country’s most iconic memorials and monuments.

Installed to celebrate the 400th anniversary of the invention of the printing press, the Gutenberg Memorial in Frankfurt commemorates one of the city’s most famous and revered residents. Gutenberg, whose invention of moveable type brought literature and learning to the masses, supposedly lived in the city between 1454 and 1457.

Built under King Ludwig I, the Hall of Fame (Ruhmeshalle) in Munich was designed as a pantheon of noted Bavarians who had made outstanding contributions to their country. At the centre of the three wings stands an 18-metre-high, bronze statue of Bavaria. For a small fee, you can climb the spiral staircase up to the observation platform in her head.

This towering monument of national pride, the third largest in Germany, was built to honour Emperor Wilhelm I after his death. Beneath an enormous equestrian statue of Wilhelm, the medieval emperor Frederick Barbarossa reclines in a throne. Legend had it that he was sleeping under the Kyffhaäuser mountain until Germany needed his leadership again. By invoking his image, the monument proudly proclaims that Wilhelm I’s empire is the culmination of Barbarossa’s long-held desire to unite the German nation. 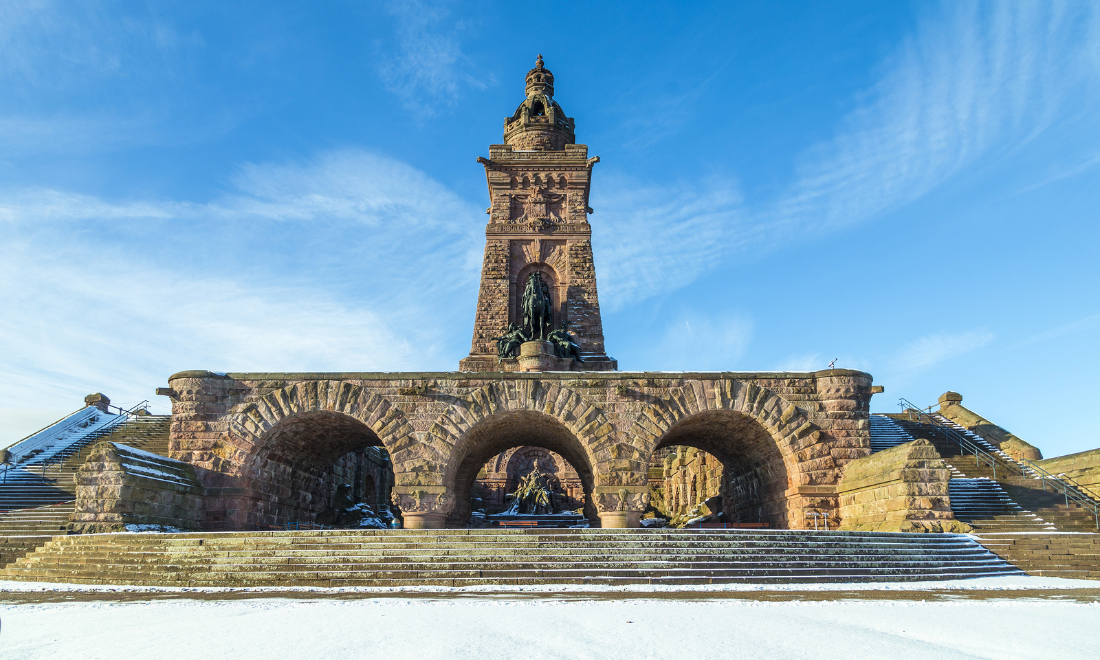 Visitors who manage to scale the 92 steps up to this squat tower are rewarded with some of the best views over Stuttgart. Built in honour of Germany’s first chancellor, Otto von Bismarck, this structure is a leftover from the short-lived “Bismarck cult” which flourished at the turn of the twentieth century. Over two hundred of these Bismarck towers were built between 1869 and 1934, funded entirely by public donations.

Monument to the Battle of Nations, Leipzig (1913)

Everything about this monument, which was built to commemorate Napoleon’s bloody defeat at the Battle of Nations in Leipzig, is sombre and yet almost absurdly colossal: from the cavernous crypt, where eight towering statues of medieval knights represent the battle’s fallen warriors; to the Hall of Fame, which contains monumental statues representing the four legendary qualities ascribed to the German people, bravery, faith, sacrifice and fertility. Outside, a larger-than-life archangel Michael stands vigil, reflected in the glassy “Pool of Tears”. 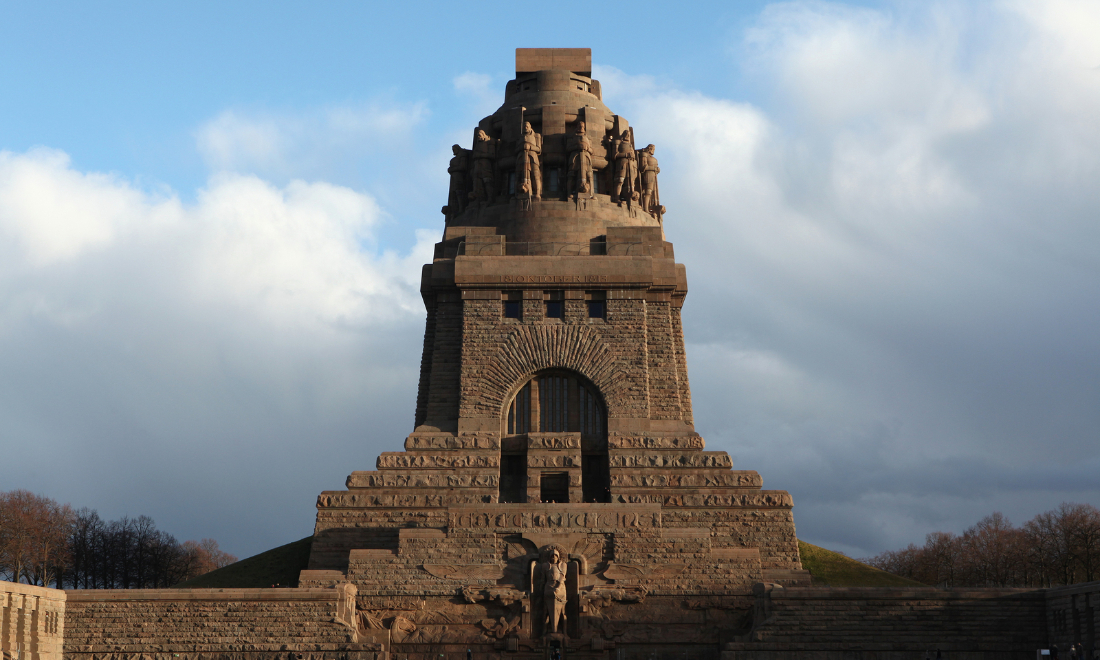 It may look like an ancient Roman amphitheatre, but this egg-shaped construction in Heidelberg actually dates from 1934. It is one of forty such amphitheatres that were built between 1933 and 1939 by the Nazi party to host propagandistic theatre performances. 20.000 visitors turned out on its opening night to hear master of propaganda Goebbels speak. After these performances fell out of public favour, the site was turned into a public park, and remains one to this day.

The artist Gunter Demnig came up with the idea of using Stolpersteine (literally, “stumbling stones” - small blocks of concrete topped with brass plaques) as a way of commemorating the victims of Nazi extermination and persecution. The first Stolperstein was installed in 1992 in front of City Hall in Cologne. The stones are placed right into the pavement in front of the victims’ last-known, freely-chosen places of residence. To date, more than 70.000 Stolpersteine have been laid, each one hand-inscribed by Demnig. 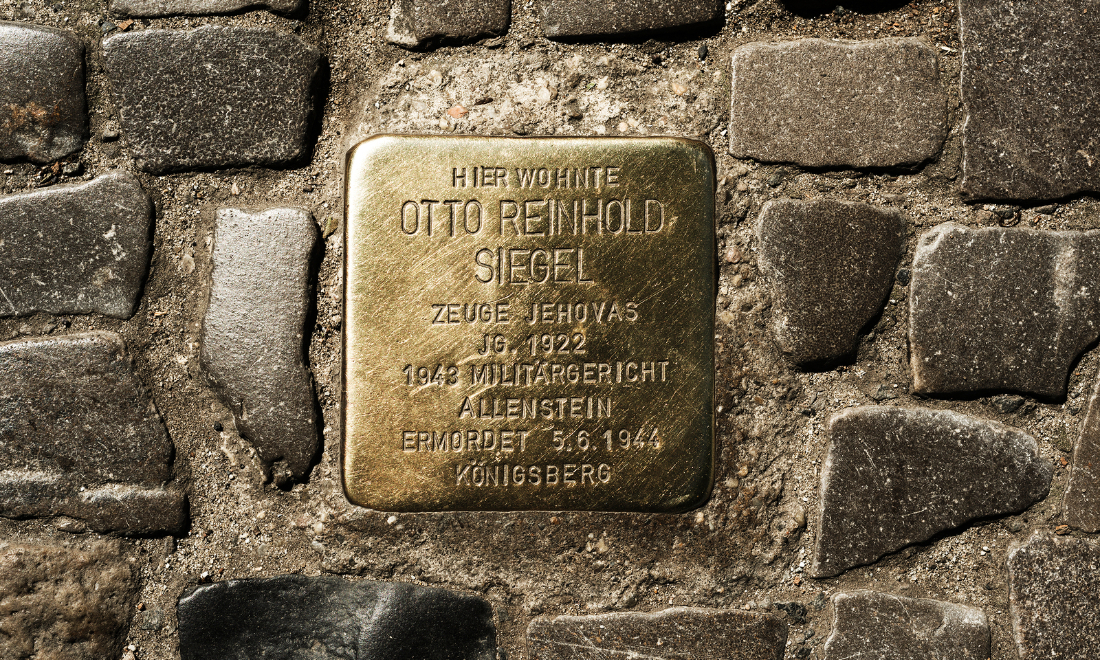 Just outside the south entrance to Dammtor Station in Hamburg, the Kindertransport Memorial “Der letzte Abschied” (The Final Parting) commemorates the approximately 10.000 Jewish children from Germany, Austria, Czechoslovakia and Poland who were taken in by the United Kingdom. Many of these “Kindertransport children” were the only ones in their families to survive the Holocaust. The memorial, one of four placed along the children’s “route to safety”, acknowledges Hamburg’s role as a “turnstile” of the rescue effort: between December 1938 and September 1939, around 1.000 Jewish children travelled from Hamburg to the United Kingdom.

Memorial to the Murdered Jews of Europe, Berlin (2005)

The Denkmal für die ermordeten Juden Europas is Germany’s central memorial site for the Holocaust. It consists of 2.711 concrete slabs, arranged in rows on a site covering 19.000 square metres. The labyrinth of pathways between the undulating stones is intended to make visitors feel the loss and disorientation felt by Jews during the Holocaust. The systematised slaughter of the Holocaust is documented in an information centre on the site’s eastern edge. 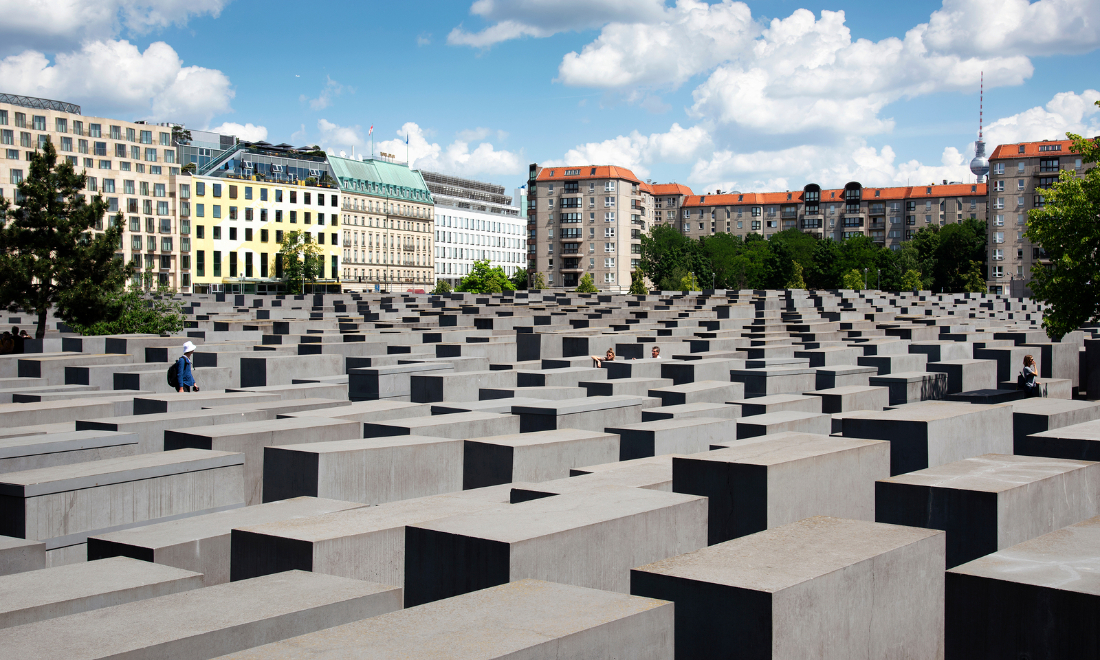 It may not be as well-known as East Side Gallery (home to that iconic painting, “The Kiss”) but this 70-metre preserved stretch of the Berlin Wall, complete with an observation tower, provides a far greater insight into the division of Berlin. Once a border strip between East and West, it is now a place of remembrance. An open-air exhibition and memorial documents how Bernauer Straße, where the memorial is located, was sliced in two by the construction of the wall and became a focal point for escape attempts to the West.

Other monuments and memorials in Germany

Here are some other German monuments and memorials that deserve a mention, divided by federal state and city.