The northeastern state of Brandenburg is the fifth-largest federal state in Germany, in terms of land mass, and the tenth-most populous. As well as surrounding the city-state of Berlin, Brandenburg borders the states Mecklenburg-Vorpommern, Lower Saxony and Saxony.

A brief history of Brandenburg

The historical territory of Brandenburg originated as a margave established in 948 AD by the Holy Roman Emperor Otto I to exert control over the Slavic peoples settled around the River Oder. In the 14th century the margrave of Brandenburg was elevated to the status of prince-elector and in 1415 this privilege was bestowed upon the House of Hohenzollern, which would rule Brandenburg until the end of World War I.

The King in Prussia

Through a series of co-rulership agreements in the 16th and 17th centuries, the Hohenzollerns significantly expanded their territory to form a realm known as Brandenburg-Prussia. By 1701 they had become sufficiently powerful for the margrave Frederick I to confidently crown himself the first “King in Prussia” - a new combined state, with Brandenburg at its centre, that would later become the driving force behind the establishment of the German Empire in 1871.

After Germany’s defeat in World War II, part of Brandenburg was handed to Poland and was cleansed of its German population. The remainder of the state fell under Soviet occupation when Prussia was finally broken up in 1947. Initially, Brandenburg was one of the component states in the newly-founded German Democratic Republic (GDR), but it was completely dissolved in 1952 during administrative reforms.

The reunification of Germany on October 3 1990 also witnessed the resurrection of the state of Brandenburg. Its new Landtag met for the first time on October 26, 1990. As in other parts of East Germany, reunification brought hardship as well as assistance to Brandenburg: exposed to West Germany’s competitive market economy, technologically-outdated East Germany found it difficult to keep up, and material hardship and unemployment boomed.

While still remaining one of Germany’s least densely-populated states, Brandenburg has begun to recover in recent years. Its proximity to Berlin meant that the area experienced a population boom larger than that in other eastern German states in the years 1995 to 2000, although this has begun to reverse again in recent years as Berlin’s suburbs gradually expand. This low population density, however, means that it is home to some of the best-preserved wildlife and nature in the whole of Germany.

Brandenburg was once nicknamed the “sandbox of the Holy Roman Empire” on account of the sandy soils that cover a large part of its landmass. However, this moniker belies the state’s geographical diversity, for these sandy plains are crisscrossed and pitted by the tributaries of the Rivers Elbe and Oder, enormous stretches of pine and fir forests and more than 3.000 lakes.

A better nickname would perhaps be “Berlin’s garden”: with roughly half of Brandenburg’s area turned over to agriculture and a further third covered by forests, the state offers an abundance of pastoral scenes - countryside, woodlands, lakes and twee villages - all within easy reach of Berlin on the train. Brandenburg is also home to a national park, the Lower Oder Valley, which was established in 1995 as a joint Polish-German effort to preserve the region’s flora and fauna.

Brandenburg is characterised by a humid continental climate, with warm summers and no dry season. Rainfall in the state is a relatively heavy average of 550mm per year and the average temperature varies anywhere from -3 degrees in the winter to 26 degrees in the summer. There is a slight difference between the weather in western Brandenburg, which has a maritime climate, and in eastern Brandenburg, where more continental influences - hot summers and cold winters - are discernable.

As a primarily rural state, Brandenburg is not home to a huge number of cities. Those that it does have, however, are well worth a visit.

Located just a stone’s throw from Berlin and an ever-popular day trip destination, Brandenburg’s state capital Potsdam was the favourite stomping ground of the old Kings of Prussia. The UNESCO World Heritage palaces and gardens offer a glorious slice of tranquility for anyone looking to escape the hustle and bustle of the city.

Known as Chóśebuz in the Sorbian dialect, Cottbus is the second-largest city in Brandenburg and the gateway to the famous Spreewald. Despite its somewhat industrial aspect, the historical centre of Cottbus is peppered with the elegant architecture that gives the town its name (Chóśebuz is a derivation of Choitische Budky, meaning “pretty little houses”).

This pretty medieval town is the third-largest in Brandenburg and the namesake for Berlin’s most famous monument, the Brandenburg Gate (rather than the state of Brandenburg itself). Its charming rural location, nestled amid a multitude of lakes, rivers and canals, makes it the perfect starting-off point for some countryside exploration.

Not to be confused with Frankfurt am Main in Hesse, Frankfurt an der Oder is an old Hanseatic city with a history stretching back to 1253. It sits right on the border with Poland, across the bridge from its Polish sister, Slubice, which was part of the city up until the end of World War II.

Unlike a lot of traditional German dishes, Brandenburg cuisine features a lot of fish, with eel, crayfish and carp appearing in plenty of regional specialities, often covered in another local favourite - Spreewald sauce, a kind of bechamel flavoured with parsley and dill.

Potatoes have been a mainstay of the Brandenburg diet ever since they were introduced to the area by Frederick the Great of Prussia. The enthusiastic Hohenzollern king even went so far as to encourage their consumption through a royal decree.

Brandenburgers may like their potatoes, but it’s for another crop that the state has achieved nationwide (if not worldwide) fame: white asparagus (Spargel). The small town of Beelitz, which marks the end of the “Asparagus Road” that stretches all the way from Baden-Württemberg, goes all out every Spargelzeit, producing around 50 percent of Brandenburg’s entire asparagus harvest each year. It even has its own museum dedicated to the “King of Vegetables”.

With its mix of pastoral peace, GDR nostalgia and imperial Prussian pizzazz, Brandenburg has something to offer everyone. If you’re stopping through, be sure to pay a visit to these unmissable sights and attractions.

Frederick the Great built Schloss Sanssouci (which literally translates as “without a care”) as a summer retreat back in the 18th century and its magical soothing power continues to delight visitors to this day. Nothing beats a good wander through the UNESCO-listed park’s maze of immaculately-sculpted gardens and vine-bedecked hills.

Located right in the centre of Oranienburg, a town near Berlin, this memorial centre tells the story of one of the biggest concentration camps in Germany at the site where it took place. At its peak, this disused factory building housed around 200.000 inmates who were exploited as slave labourers for local industry.

Known as the “Venice of Brandenburg”, the Spree Forest is a 46-metre-long and 9-mile-wide forested marshland traversed by innumerable waterways and meadows. Rent a boat or a canoe, pack a good picnic and explore this watery labyrinth in total serenity.

Take a trip 200 years into the past, to experience what life was like in the 19th century, without electricity, running water or washing machines. Suitable for the whole family, this living history museum recreates a Spreewald village as it would have been in 1840. Visit the four reconstructed farmhouses, practice milking a cow and see the largest Spreewald family bed!

Brandendburg’s flag is a red and white horizontal bicolour, with the state’s coat of arms - a red eagle looking to the right - at the centre. The flag was adopted by the newly-reformed state on January 20, 1991, copying the flag used by the Province of Brandenburg in both the Kingdom of Prussia and the Free State of Prussia. 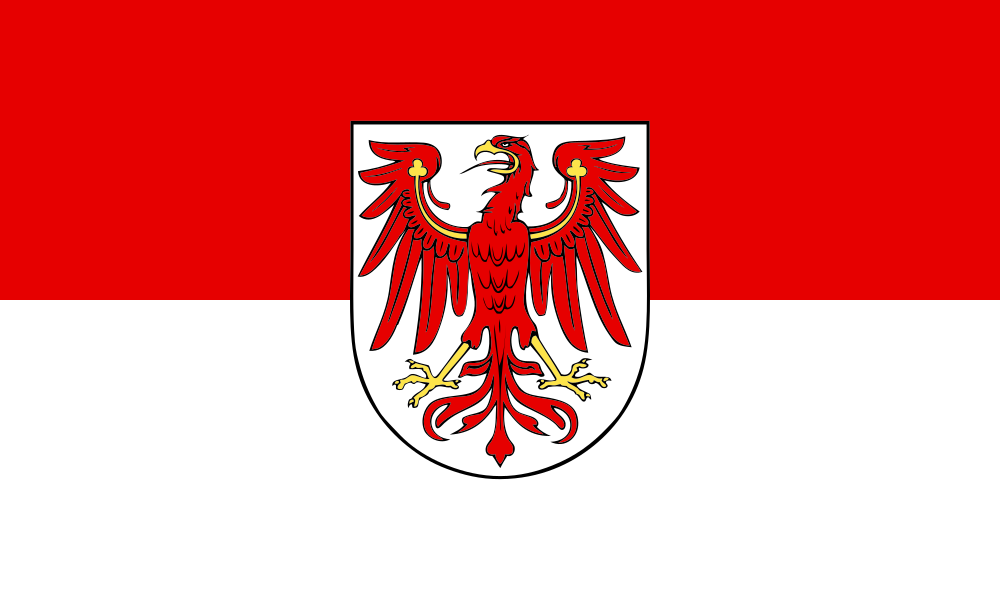 Between 1945 and 1952, before the East German states were dissolved by the socialist government, a different flag with three stripes in red and white was used. 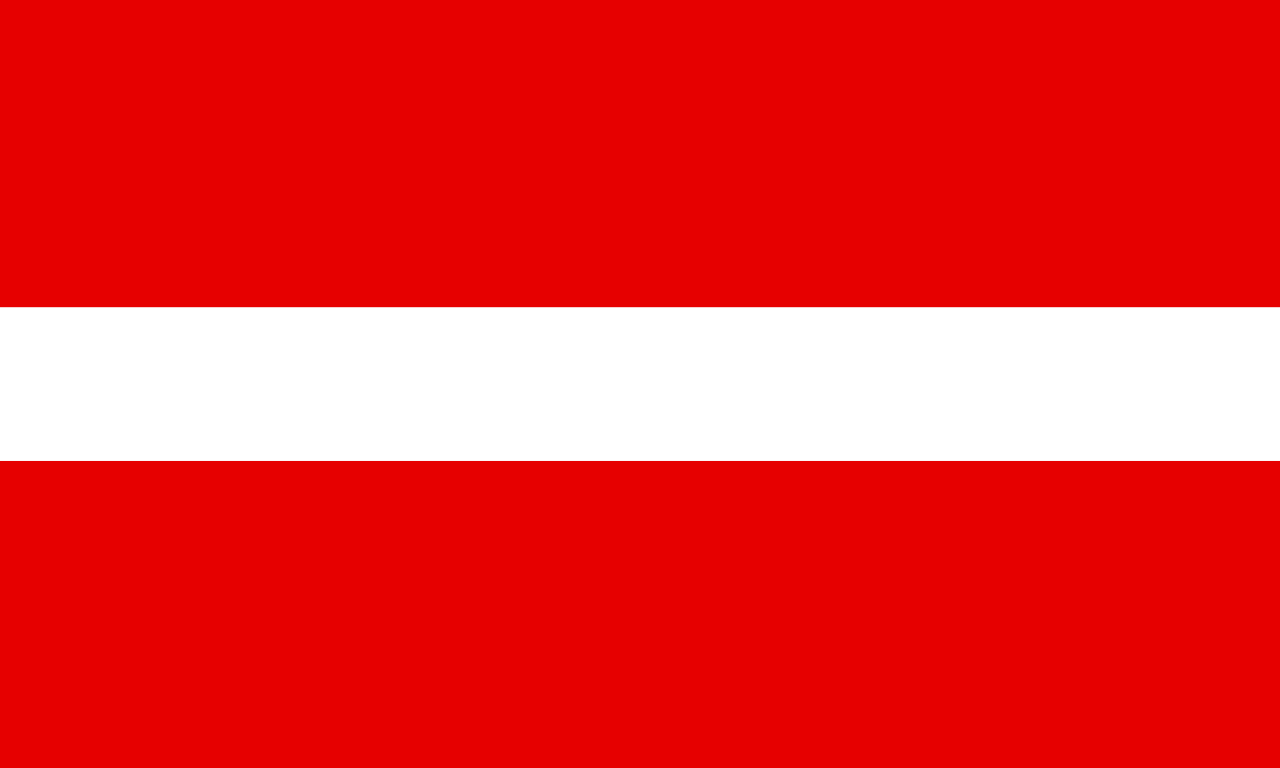