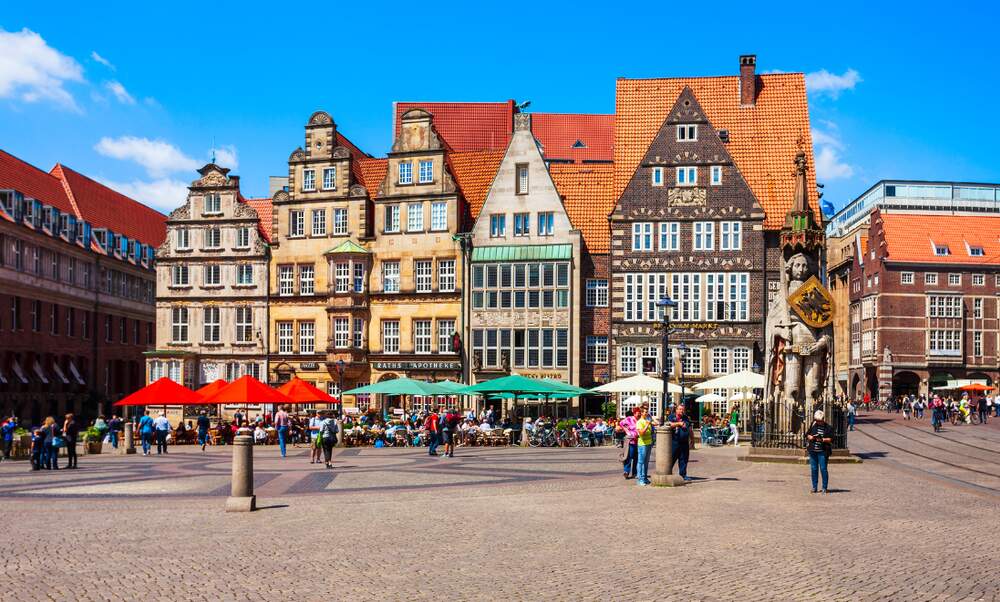 Looking for information on Bremen? Our expat city guide has plenty of useful information for locals, internationals, students and tourists.

Officially known as the Free Hanseatic City-State of Bremen, Bremen is the smallest and least populous federal state in Germany. It actually consists of two territories: the Hanseatic city of Bremen, which is the 11th-largest city in Germany, and the exclave seaport Bremerhaven. Both Bremen and Bremerhaven are entirely surrounded by the state of Lower Saxony. This page primarily focuses on the city of Bremen.

Despite its outwardly industrial aspect and mercantile history, Bremen is home to more than its fair share of cultural attractions. As well as dozens of museums and galleries, the city sports some of the country’s most charming medieval architecture, a sprinkling of fairy tale magic, and the oldest coffee house in Germany.

A short history of Bremen

Archaeological finds attest to the fact that the marshlands around Bremen have been settled since at least 12.000 BC. Their position on the junction between two historically important trade routes made it an advantageous site. Over time, this geographical location aided Bremen’s transformation into an important economic power.

Before it was a primarily mercantile city, however, Bremen was a centre of religion. After Emperor Charlemagne decreed that all Saxons must convert to Christianity on pain of death, in 848 Bremen was established as a diocese from which the Christianisation of northern Europe could be carried out.

The Free Imperial City of Bremen

In 965 the city was granted free market rights - including the right to mint its own coins and make its own laws - and its significance as a centre of commerce as well as religion began to grow. These special privileges laid the foundations for Bremen’s later elevation to the status of Free Imperial City. The young city became even more influential in 1260, when it entered the Hanseatic League, one of the most powerful trade associations in Germany.

Bremen’s drive for autonomy continued into the 19th century, when it was able to negotiate independent sovereignty after Napoleon’s withdrawal from Germany. In 1867 Bremen joined the North German Confederation with Hamburg as a Free Hanseatic City and four years later it became an autonomous component state in the newly-founded German Empire.

The city-state of Bremen

In the aftermath of World War II the mayor of Bremen travelled to America to reestablish Bremen’s statehood and prevent the former city state being incorporated into Lower Saxony, which was under British occupation. Eventually it was agreed that Bremen - 60 percent of which had been destroyed by Allied bombing - would remain separate, and in 1947 it became an US-occupied enclave in the middle of the British zone. It was joined by its old port, Bremerhaven.

To this day, Bremen’s proud history of autonomy and global trade is reflected in the city’s architecture, traditions and social life, which form a rich melting pot of cultures that makes just about anybody feel at home - and the statue of Roland, the symbol of civic liberty and freedom, still stands proud in the city’s main square.

Due to its proximity to the North Sea, Bremen has a moderate oceanic climate, making extremes of temperature a very rare occurrence. The weather varies according to the time of year, but the seasonal fluctuations aren’t as extreme as in other parts of Germany.

The warmest months of June, July and August see average high temperatures of somewhere between 20 and 22 degrees - and the highest rainfall of the year - while the coldest months are December, January and February. During winter, the thermometer usually dips to somewhere around the 0 degrees mark.

What to do in Bremen: Sights & Activities

This compact city is choc-a-bloc with sights and attractions. Make sure to tick at least a couple of these off your list:

You can’t pass through Bremen without paying a visit to the city’s pride and joy: the Bremen Town Musicians is a small bronze statue of the donkey, dog, cat and rooster who set off from Bremen in the Brothers Grimm fairytale. Notice the donkey’s shiny front legs? Touching them is meant to give good luck - but be sure not to give yourself away as an out-of-towner by rubbing one leg with just one hand. Bremeners say that’s just one donkey shaking the hand of another!

Take a tour of the Beck’s brewery

Every minute around 3.000 bottles of Beck’s Beer are cracked open worldwide - and in Bremen you can visit the place where it all began. Tour the brewery that master Brewer Heinrich Beck established in 1873, learn all about the brewing and fermentation process and - most importantly - have a taste of a world-famous German beer.

This 100-metre-long street was rescued from dilapidation and transformed under the supervision of a local coffee magnate into a magnificent example of art-deco and brick expressionist architecture. Apart from admiring the remarkable buildings, a snoop around the craft shops and small boutiques is well worth your while.

Get curious at the Universum

Perfect for a rainy day but good fun all year round, Universum is a popular interactive science museum, housed in a futuristic, metallic building that is half mussel, half spaceship. More than 300 exhibits offer you the chance to play table football against a robot, wobble your way through an earthquake and even experience what it’s like to be blind.

Frolic with the deer at Bürgerpark

This 200-hectare park expands north from Bremen university out into open countryside and, with plenty of sheep, goats, pigs, wild boar, alpaca, guinea pigs and deer to admire, offers a great day out for the whole family. There’s also a lake where you can rent boats, a mini-golf centre and even a stage for theatre performances in the summer.

Trains and motorways link Bremen with the country’s other major cities, while the airport offers both domestic and international flights. Public transportation in Bremen, a network of railways, trams, S-Bahns and buses (but not U-Bahns), is managed by the transport association VBN.

Bremen’s packed social calendar changes from year to year, but these regular events are fixtures.

The “ice wager” is a somewhat bizarre Bremen tradition that dates back to 1829. On January 6 the Three Wise Men and a “tailor” meet on the bank to check if the river is frozen. While the tailor tries to get to the other side without getting his feet wet (he usually has to enlist the help of a boat), donations are collected from the German Maritime Rescue Service - usually around 450.000 euros each year.

A far cry from the traditional German carnivals you’re likely to witness in cities like Cologne and Mainz, Bremen Samba Carnival takes its inspiration from South America, arriving every February in a burst of colourful costumes, masks, stilt walkers and drums.

This international circus festival sees established artists and newcomers alike take to the streets to demonstrate their many talents, free of charge! Expect plays, acrobatic shows and a lively summer mood.

This free, 5-day arts festival is held on the Weser riverbanks and offers a stimulating programme of live music, outdoor art, street entertainment, theatre, dance and poetry readings from over 100 performers - as well as some delicious food.

Held in the latter half of October, Freimarkt is Germany’s oldest and third-largest funfair. More than 300 attractions set up shop in the 100.000 square-metre fairground, providing non-stop entertainment for the whole family. If roller coasters aren’t really your thing, there’s plenty of beer as well.

Hosting the headquarters of multiple international companies, Bremen has plenty of jobs that are perfect for expats.

Housing in Bremen is relatively affordable, compared to some of Germany’s largest cities. If you’re looking for somewhere to live, check out our listings for short-term accommodation and rentals in Bremen.