German cuisine may not be particularly well-regarded worldwide, but what it lacks in refinement it more than makes up for in flavour and heartiness. Here is an overview of some traditional German dishes you are likely to encounter. There are also many regional specialities that are very popular original dishes from Germany.

Literally translated as “one pot”, Eintopf is a simple stew that is, as the name suggests, prepared in a single dish. It generally consists of a combination of broth, vegetables, potatoes and meat or sausages.

The dish was popularised by the Nazi party in their “Eintopfsonntag” campaign that encouraged Germans to eschew the traditional Sunday roast dinner in favour of a thriftier one-pot meal and set the savings aside for charity. Despite this unsavoury association, the Eintopf remains a popular traditional dish in Germany.

Erbsensuppe - or pea soup - is a thick, hearty soup made from split peas, potatoes, ham hock and Frankfurter sausages. It is usually eaten steaming hot with a thick slice of bread and butter.

An especially popular dish in Germany in the winter months, it is often sold by street vendors, particularly at Karneval celebrations in Cologne, Mainz and Düsseldorf. Scooping up hot spoonfuls whilst shivering in sub-zero temperatures, it’ll be the most delicious thing you’ve ever tasted. 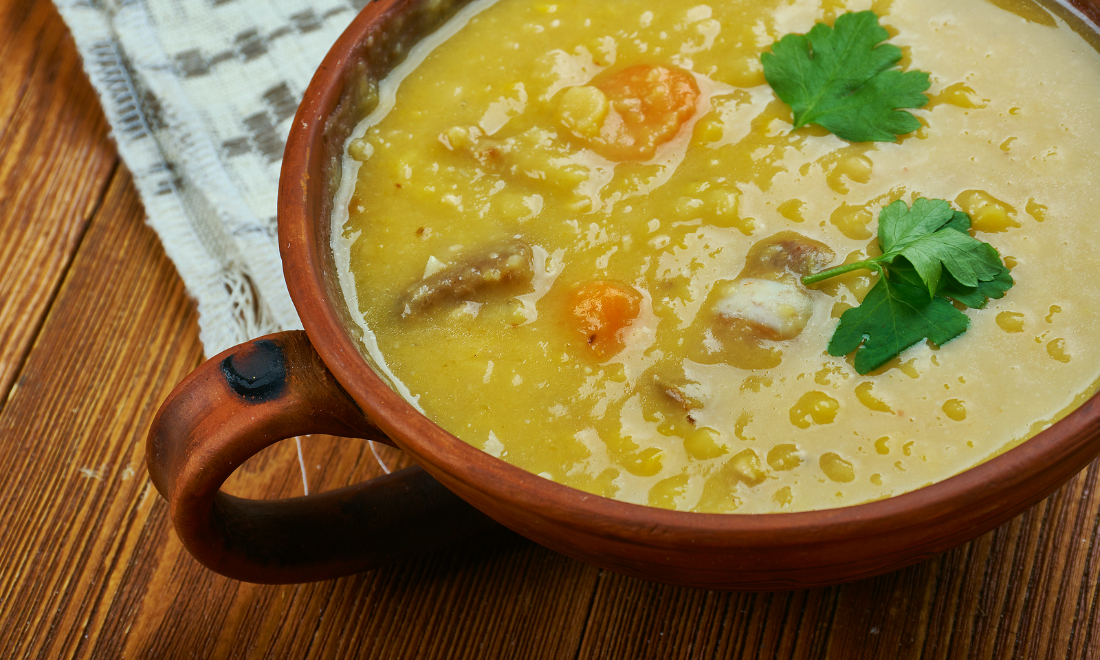 You can’t talk about German food without mentioning sausages! The history of the Bratwurst in Germany stretches all the way back to 1313, when the council in Nuremberg stipulated that only pork loin meat was to be used in sausage-making. Although there are now as many as 40 different varieties of German Bratwurst, the recipe has barely changed in 700 years.

Bratwurst are typically served by street vendors in a white bread roll with ketchup or mustard. They may also be served in restaurants, often with potato salad and Sauerkraut.

Although it translates as “liver cheese”, Leberkäse is actually a mixture of finely-ground pork, beef or liver (and sometimes all three). Vaguely reminiscent of meatloaf, it is typically pressed into a bread tin and then baked to form a crunchy brown crust.

Leberkäse in Germany must, by law, contain at least 4 percent liver (5 percent in Stuttgart). However, an exception is made for Bavaria, where Leberkäse that doesn’t contain liver can be produced. In many parts of Germany, it is traditionally eaten in a bread roll as a snack. 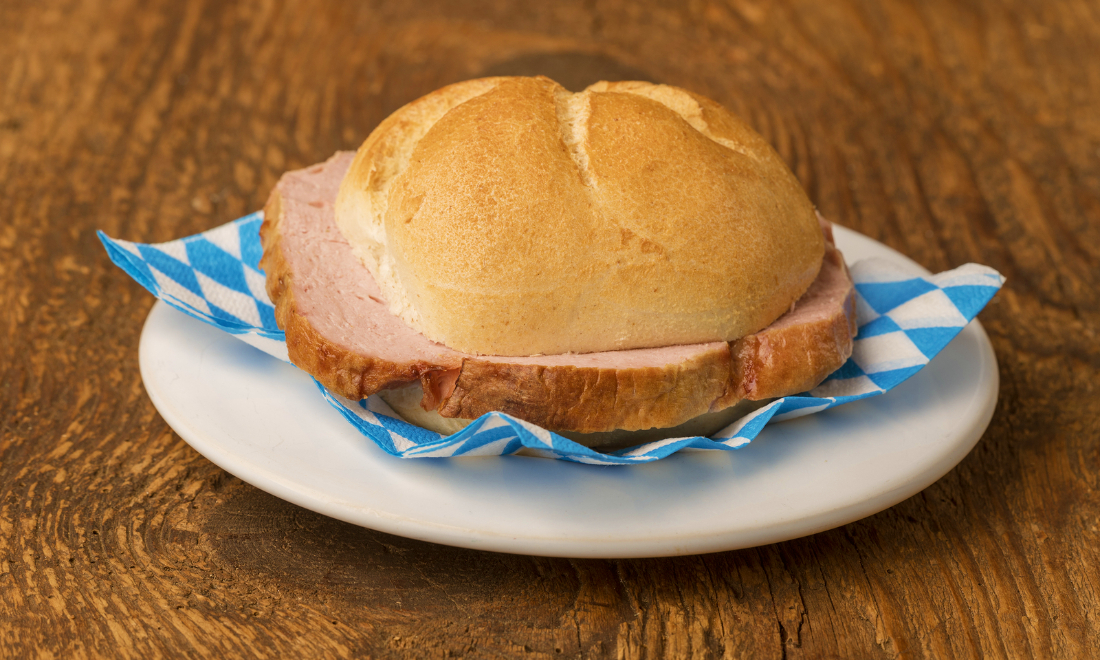 Germany’s favourite - and most famous - dish is not actually German. It’s not even Austrian! Its convoluted history can be traced from Vienna to Milan, where locals learnt it from Spanish soldiers, who got it from the Arabs, who apparently brought it from the Byzantine empire…

Whatever its origins, the moral of the story is that almost everyone likes Schnitzel: a tender, boneless piece of meat (most often pork), breaded, fried and served with a wedge of lemon. Wiener Schnitzel is made with veal while Jägerschnitzel (hunter's’ schnitzel) comes with a mushroom sauce.

They may sound French, but Rouladen - rolls of thinly-sliced beef stuffed with pork, onions and pickles - are a German classic. Once assembled, the rolls are browned in a pan and then braised in red wine and broth.

Although at one time Rouladen were considered part of an everyday meal, nowadays they are usually only eaten on special occasions (perhaps because they are quite a hassle to make!) They are usually served with either potato dumplings or mashed potato and plenty of gravy. 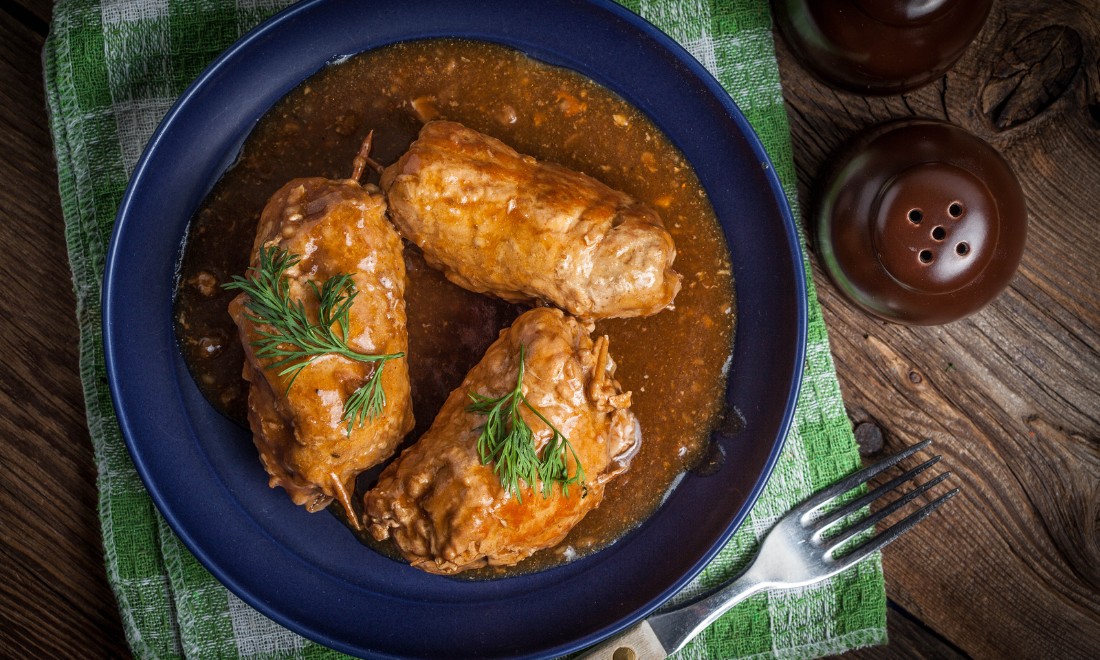 Germany’s answer to French Tartiflette, Flammkuchen (“flame cake”) is a cross between a pizza and a flatbread: a thin, crispy base topped with creme fraiche, bacon and onions. One of Germany’s favourite dishes, it’s so good that the Alsace and Saarland regions often squabble over who invented it.

Although some eateries in Germany may experiment with different toppings and vegetarian versions, there isn’t really any need to reinvent the wheel when Flammkuchen’s original iteration is sheer perfection. Shared between friends, it’s the perfect snack to accompany a cold glass of German white wine.

Forget those little pretzels you get in snack packets from the supermarket - these are the real thing: chewy, bagel-like bread, shaped into a loop and covered with salt. Although accounts regarding the origin of pretzels vary enormously, they tend to agree that they were invented by European monks and that the characteristic knot shape has some sort of religious significance.

Brezeln have been part of German baking traditions for centuries, to the extent that the pretzel is used as the emblem for bakers in southern Germany. The shape and exact recipe of pretzels vary considerably across Germany; savoury ones are typically eaten as a snack or, in Munich and the rest of Bavaria, as an accompaniment to a main meal.

Everyone knows the Germans are serious about their bread, and Pumpernickel is a serious kind of bread. A dense rye bread made with a sourdough starter, its name reputedly refers to the fact that it is hard to digest: pumpern in old Westphalian means “to break wind”.

While most varieties of black bread (Schwarzbrot) are baked, Pumpernickel is steamed at a low temperature for anywhere up to 24 hours, resulting in the bread’s characteristic dark colour. Pumpernickel can typically be eaten at most meals - with cold meats and cheeses for breakfast, as an accompaniment to a hot lunchtime meal, or as part of a light dinner.

Delicious waxy, yellow potatoes, fried in butter with bacon pieces and caramelised onion: German food doesn’t get much better than Bratkartoffeln. They are often served as an accompaniment to Schnitzel or other meat dishes.

Bratkartoffeln aren’t just popular in Germany: as early as 1870, “German fries” were appearing on American and British menus. The story goes, however, that animosity towards anything “German” during the Second World War caused the rejection of German fries in favour of the Allied equivalent: French fries. 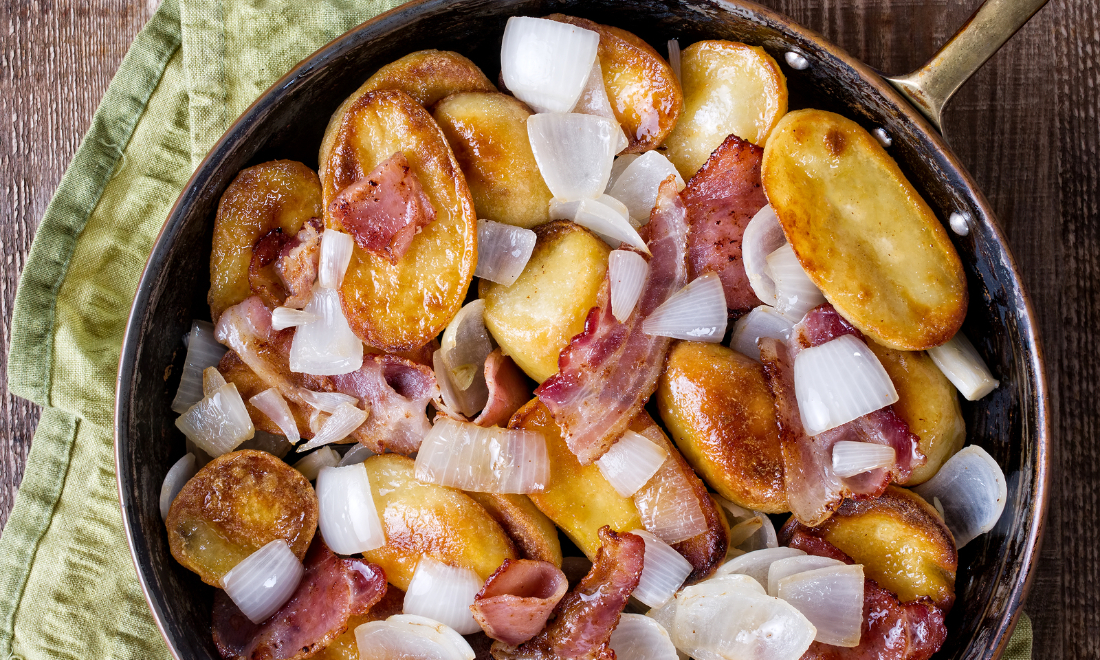 It may be the dish most stereotypically associated with Germany, and historically given rise to some unpleasant nicknames, but Sauerkraut (a kind of pickled, fermented cabbage) does not actually hail from Germany. It is thought to have been brought to Europe from China, where they fermented cabbage with rice wine.

Sauerkraut has been a popular staple of the German diet since at least the 17th century. Recently, it has experienced a revival as a purported health food. Made by layering finely-shredded cabbage with salt and leaving it to ferment, Sauerkraut is a popular accompaniment to many traditional German dishes.