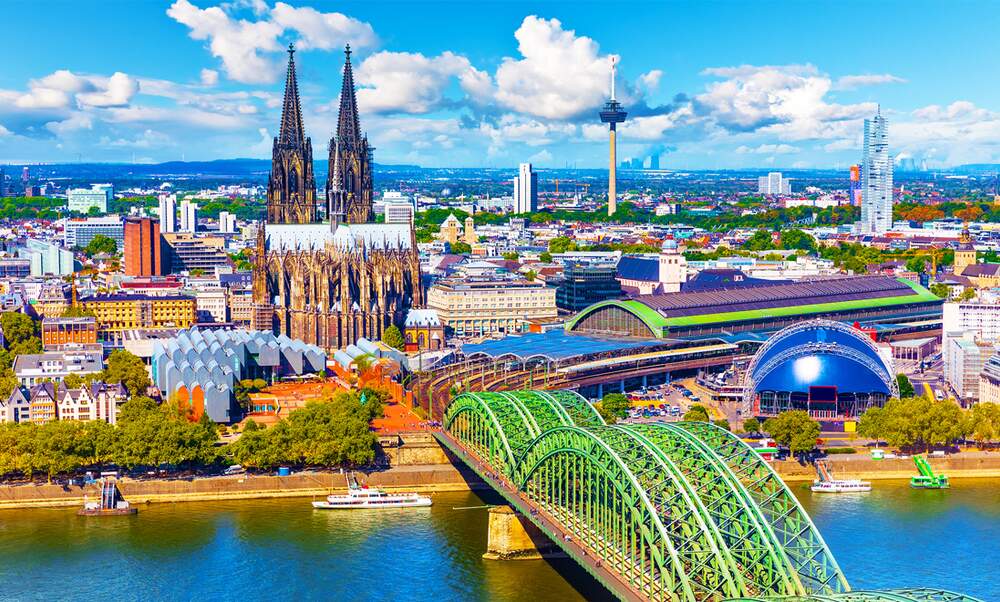 Moving to or living in Cologne? Or just visiting? Read our tips on sites, activities, events and more.

Situated on the River Rhine between the cities of Bonn and Düsseldorf, Cologne (Köln) is the largest city in North-Rhine Westphalia and the fourth largest city in Germany.

Despite being Germany’s “oldest city”, Cologne is generally renowned for its liberal, laid-back culture, combining Roman history and medieval architecture with beers halls, carnivals and a chocolate museum. Not only are Cologne’s inhabitants friendly and welcoming, but they also know how to have a good time.

A short history of Cologne

Cologne was established as a Roman colony in 50AD under the rather lofty title of “Colonia Claudia Ara Agrippinensium”, shortened to “Colonia”. It functioned for some time as the headquarters for the governor of Lower Germany, and the town gradually grew into an important centre for trade and goods.

Cologne was made an archbishopric by Charlemagne in 785. Over time, Cologne’s archbishops gradually accrued power and status, collecting tolls and customs duties from the city’s inhabitants and eventually becoming electoral princes for the Holy Roman Empire in the 12th century.

In 1288, Cologne freed itself of the archbishops’ control and became a free city. Its ideal location on the Rhine put the city at the centre of major trade routes and it quickly prospered. An economic decline following the discovery of America proved to be short-lived when the onset of the industrial revolution changed the fate of the city. The arrival of new industries and the railways enabled Cologne to re-emerge as a centre of trade.

“The world’s greatest heap of rubble”

During the Second World War, Cologne endured 262 air raids, which destroyed an estimated 90 percent of its inner city and displaced 95 percent of its population. By the end of the war, only 40.000 people were still living in the city. The post-war rebuilding and restoration of Cologne’s cultural sites lasted well into the 1990s.

Today, business activity in Cologne has diversified, moving away from traditional industries to include things like engineering, insurance and media. Lying at the centre of European transport networks, it is one of the most frequently-visited travel destinations in Europe.

What to do in Cologne: Sights & Activities

If you’re stopping in Cologne, make sure to check out some of the following:

A visit to Cologne wouldn’t be complete without popping into its famous cathedral (Kölner Dom). Instantly-recognisable by its twin towers, Cologne Cathedral took nearly 500 years to complete! If you’re feeling fit, you can try scaling the 533 steps up the south tower for some spectacular views across the city.

After all that climbing, you’ll be in need of some refreshment. In the Veedel, Cologne’s painstakingly reconstructed old town, you can find a number of traditional breweries (Brauhäuser) selling their own brand of Cologne’s local beer - Kölsch. Sip on your Stange (a small 0.2l glass), eat some traditional German dishes, and chat with the friendly locals. You might even pick up a few words of the Cologne dialect (also called Kölsch!)

Sink your teeth into the chocolate museum

That’s right, there’s a chocolate museum. No need to explain why this is one of Cologne’s most-visited attractions. Learn about the global history of chocolate, watch bars being made before your eyes and marvel at the 3-metre-high fountain of melted chocolate.

All roads lead to Rome

Cologne’s Roman foundations are visible all over the city, making it one of the best places in Germany to see Roman architecture and artefacts. Visit the Praetorium or Weidener Grabkammer to see snapshots of Roman life or discover the whole history of Romans along the Rhine at the Römisch-Germanisches Museum.

Set sail on the Rhine

The Rhine River is Cologne’s lifeblood. Take a stroll down the river bank to watch the enormous barges float lazily by. Well-maintained cycle paths run the entire 1.320km length of the Rhine, if you fancy taking in some sites by bike. Alternatively, there are a number of operators running boat tours.

You can access the majority of Cologne’s major sites on foot within the inner city. Elsewhere, the KVB (Kölner Verkehrsbund) runs a comprehensive network of trams and buses across Cologne, making getting about a breeze.

Cologne is well known for certain annual festivities, which visitors come from all over the world to attend:

Although Cologne carnival is officially celebrated from New Year’s Day to Ash Wednesday, the main festivities take place during the “Crazy Days” from Weiberfastnacht to Aschermittwoch. Throughout this period, Cologne’s residents take to the street in costume, celebrating, singing and drinking. While mini processions take place throughout the week, the high point is the Rose Monday parade. Join the crowds lining Cologne streets, shouting for “Kamelle” and “Sträuße” (“sweets” and “flowers” in Kölsch dialect) from the passing floats.

Every year on the first weekend of July, half a million participants take to Cologne’s streets to celebrate love, diversity and tolerance as part of Cologne Pride. The Sunday Pride Parade is preceded by two weeks’ worth of political and cultural events, street parties and celebrations.

From mid-November, Cologne comes alive with Christmas cheers as thousands of market stalls pop up all over the city, dishing out Glühwein, Reibekuchen and handmade gifts. The largest, most famous Christmas market in Cologne can be found under the Kölner Dom, but themed markets like the fairytale market and the medieval market are also fixtures.

Cologne’s prime location and transport connections makes it a choice destination for international companies. Take a look at our list of the jobs on offer in Cologne.

Whether it’s something short-term or your forever home, you’ll be sure to find what you’re looking for on our Rentals in Cologne page.