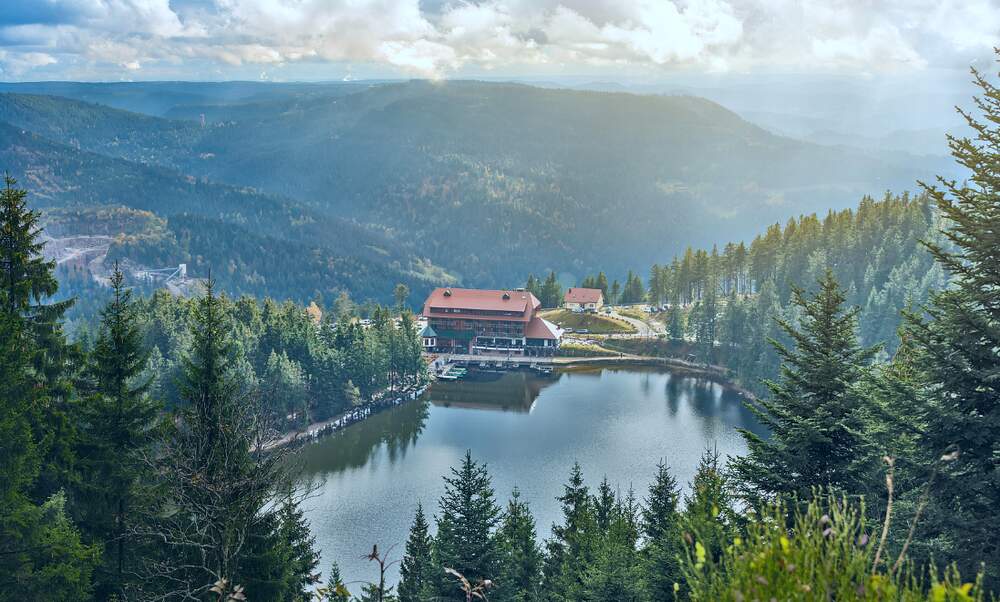 Located in south west Germany and bordering the states of Bavaria, Hesse and Rhineland-Palatinate, Baden-Württemberg is the third-largest federal state.

A brief history of Baden-Württemberg

Baden-Württemberg covers the historical territories of Baden, Prussian Hohenzollern and Württemberg. Although the area has been settled as early as 100 AD, when the Romans built a defensive barrier to keep out the invading Alemanni, the state did not come into official existence until 1952. It is, therefore, the youngest western German state.

In the aftermath of the Second World War, the Allies created three states that covered the territory of modern-day Baden-Württemberg: Württemberg-Baden (in the American zone) and Südwürttemberg-Hohenzollern and Südbaden (both in the French zone). In a referendum on December 16, 1951, these three states voted unanimously to merge, and Baden-Württemberg officially came into being on April 25, 1952.

In the ensuing years, Baden-Württemberg’s population grew at an incredible rate, fuelled by the arrival of thousands of fugitives and displaced persons from the Soviet-occupied East. They were attracted to the area partly by ancestral links, and partly by the fact that having escaped the brunt of wartime destruction, the area seemed to present plenty of new opportunities.

Alongside agricultural goods, Baden-Württemberg flourished in the postwar years as a producer of high-value-added industrial products like watches, jewellery, leather goods, instruments and hardware. As traditional manufacturing in the state began to decline during the 1990s, its industry managed to adapt, instead of expanding into areas like technology and business services. To this day, the state has remained a roaring engine of manufacturing and one of Germany’s prime exporters, specialising in automobiles, mechanical engineering and healthcare.

Characterised by steep, forested uplands interspersed with deep valleys, lush meadows, lakes and soggy marshes, Baden-Württemberg is one of Germany’s most geographically-varied states. Flanked by the River Main to the north, the River Iller to the east, and Lake Constance and the Upper Rhine to the south, it is bounded on all sides by water.

All this greenery makes it one of Germany’s most important agricultural regions. The lush valleys of the Neckarland are adorned with vineyards and orchards, which produce some of the finest fruits, wines and liqueurs in the whole country.

Given its geographical diversity, the climate in Baden-Württemberg varies enormously between different regions, from a warm, humid continental climate to an oceanic climate with mild summers and cool winters. Generally speaking, the Upper Rhine Valley has the warmest weather in the state, with a yearly mean average of around 9 degrees, and the mountainous areas the coldest, with an average of 5,5 degrees.

Baden-Württemberg is one of the few states in Germany where the “dialect” is actually the native language of the near-majority of the population, rather than standard German (Hochdeutsch). Indeed, since 1999 the state has been advertising itself under the slogan, “We can do anything, except high German” (Wir können alles, außer Hochdeutsch).

The most commonly spoken dialect in Baden-Württemberg is Alemannic (Alemannisch), which is actually an umbrella term used to describe multiple local dialects, including Swabian. Franconian is also widely spoken.

As one of the largest federal states in Germany, Baden-Württemberg has no shortage of lively and beautiful cities.

Expat-friendly Stuttgart is the state capital of Baden-Württemberg and the sixth-largest German city. Nestled among glorious countryside, within easy reach of some of the best vineyards and castles in Germany, this slick, modern city offers the perfect marriage of town and country.

Famous for being home to the oldest university in Germany, Heidelberg is a romantic city full of narrow streets, picturesque houses and vivid green foliage that packs a surprisingly hefty cultural punch for a city of its size.

Dubbed the “Jewel of the Black Forest”, Freiburg is a laid-back university city with a forward-thinking mentality. Its picturesque, secluded location amid wine-rich mountain slopes allows it to enjoy one of the warmest and sunniest climates in Germany.

Overlooked by the Alps and edging up to the Swiss border, feel-good Konstanz straddles the River Rhine on the northwestern shore of Lake Constance. An important trade and spiritual centre since at least the Roman times, the past oozes from every pore of this charming, warren-like town.

As the New York Times puts it, Baden-Baden is where Belle Époque meets Instagram. Beyond its namesake thermal spas (Baden-Baden translates to “The Baths in Baden”), this pretty town is groaning with open-air cafes, luxurious boutiques and green spaces.

Not much of a mark on the tourist map - but perhaps even more lovely because of that - Karlsruhe is a laid-back, cultured student city with a healthy peppering of museums, theatres and galleries. Its unusual layout, a fan shape emanating from the central imperial palace, served as the blueprint for Washington, DC.

Besides being home to the highest church steeple in the world, Ulm also boasts both the world’s most crooked and narrow houses and is the birthplace of Albert Einstein. When it’s not creating impressive records, the city is a relaxed place of bike rides and beer gardens.

After being flattened during WWII and rebuilt in typical 1950s style, Mannheim’s architecture may not be to everyone’s taste. But what this energetic industrial city lacks in prettiness it more than makes up for in liveliness and diversity, hosting one of the largest immigrant communities in Baden-Württemberg.

If you close your eyes and picture a fairytale German town, it looks like Tübingen. Snaking up to the town’s turreted castle, Tübingen’s crooked, cobblestoned streets, studded with ramshackle, half-timbered houses, are packed with tourists, students, academics and Gogen, the old grape growers who have lived here for as long as anyone can remember.

Other regional specialities that pop up on plenty of menus include Maultaschen (a kind of German minced meat ravioli), Zwiebelrostbraten (onion-topped roast beef with gravy) and that iconic classic, the Black Forest Gateau (Schwarzwälder Kirschtorte). Don’t forget to pair with one of the fabulous local wines.

But the culinary adventures don’t stop there: the state is also home to the famous Badische Spargelstrasse (Baden Asparagus Route) - a popular pilgrimage destination for anyone who shares Germany’s obsession with the so-called “King of Vegetables”.

Baden-Württemberg’s abundance of beautiful valleys, magical forests and fairytale castles makes it a haven for hikers, while its culture-rich cities offer a wealth of distractions for those who’d prefer to keep their feet on paved ground. Some sights and attractions, however, you can’t afford to miss.

Experience the wild, magical beauty of unspoilt nature in the Black Forest (Schwarzwald), Germany’s largest continuous forest area and Baden-Württemberg’s first national park. Legend has it that this enchanted woodland got its name from its dense, light-blocking tree canopy. Add some mystical lakes, a sprinkling of silvery mist and a handful of fairytale castles, and it’s easy to see why it was such an inspiration to the Brothers Grimm.

Set atop a mountain with the same name, this imposing fairytale castle covers 1.000 years of family history - counts, princes, kings and emperors all have their roots here. Those who scramble to the top (there is a bus for the less sure-footed) are rewarded with views even more spectacular than the castle itself. Small wonder, then, that it attracts more than 350.000 visitors per year.

This open-air archaeological museum, set against the stunning backdrop of Lake Constance, takes you on a fascinating trip back in time to experience how farmers, fishermen and bronze smelters lived 3.000 - 6.000 years ago. The faithfully-reconstructed stilt houses provide a unique and fascinating insight into a mysterious world that often remains hidden from us.

Perfect for anyone who’s a bit of a petrolhead, or just wants to drive through some of the best scenery Baden-Württemberg has to offer, the Bertha Benz Memorial Route is a 194-kilometre round trip that follows in the tracks of the world’s first long-distance car journey, starting and ending in Mannheim.

If you’re a thrillseeker, a stay in Baden-Württemberg just wouldn’t be complete without a day at Europa Park, the largest amusement park in Germany and the second most popular in Europe. Scream yourself hoarse as you hurtle through the park’s 100 attractions. There’s replicas of 15 European countries, an enormous lake, and even an enchanted forest.

There are three variants of the flag of Baden-Württemberg: while the civil flag has a plain black and gold horizontal bicolour design, the state flag has two designs, bearing different coats of arms on the same black-gold background. 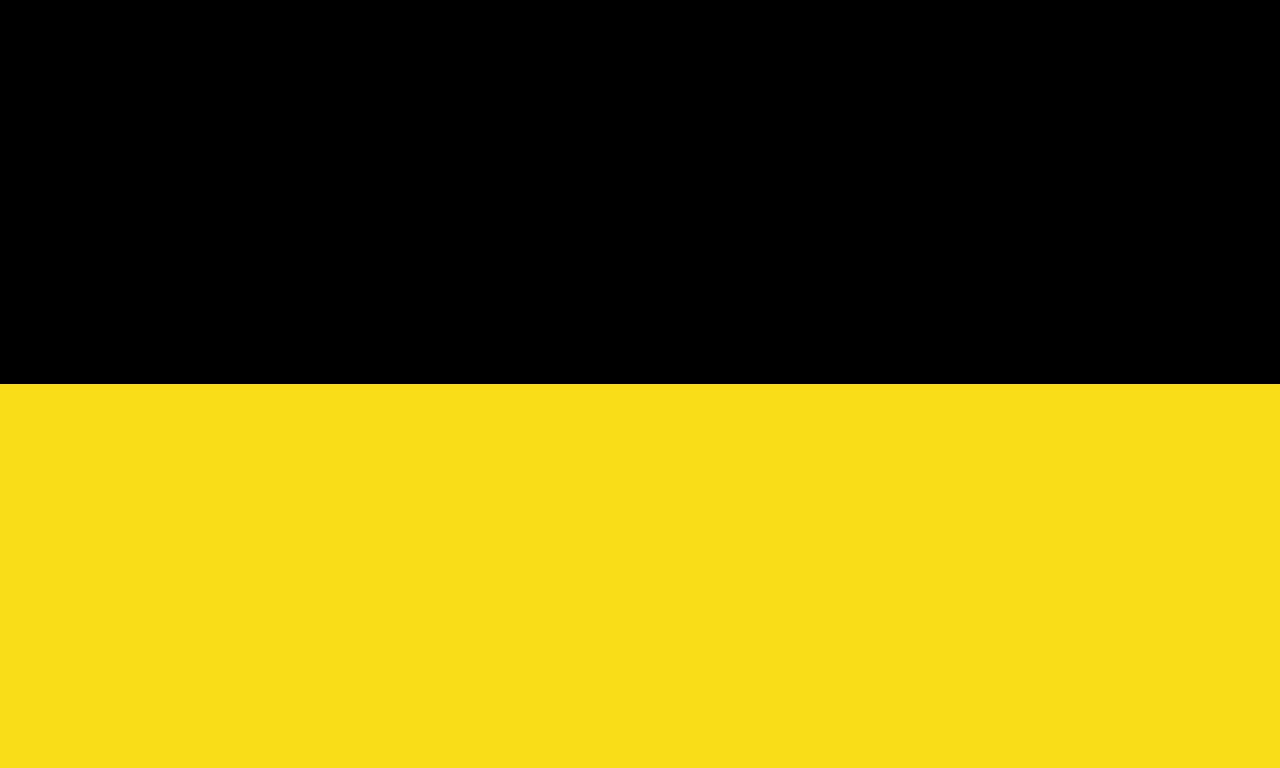 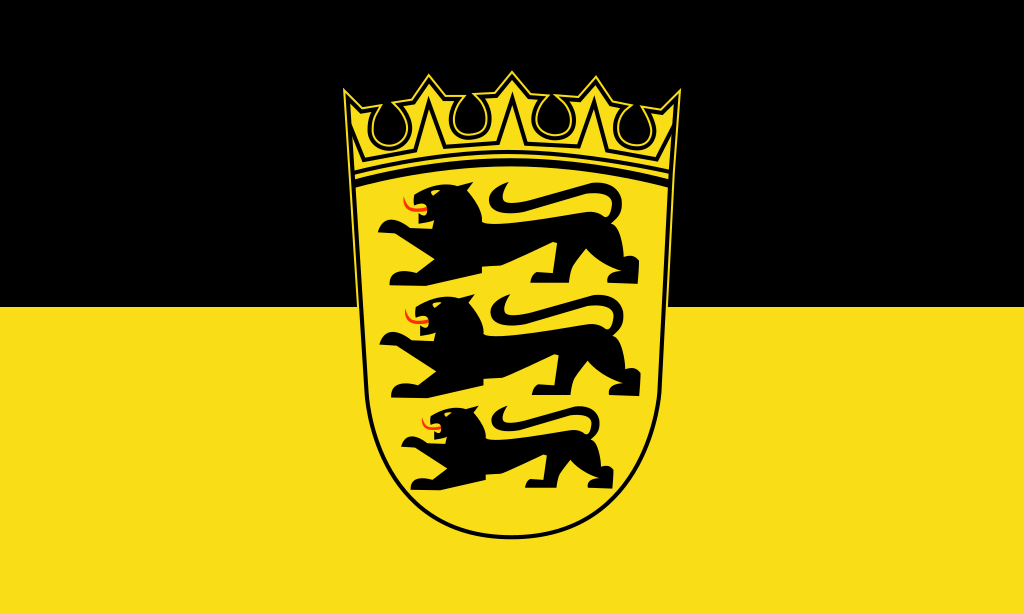 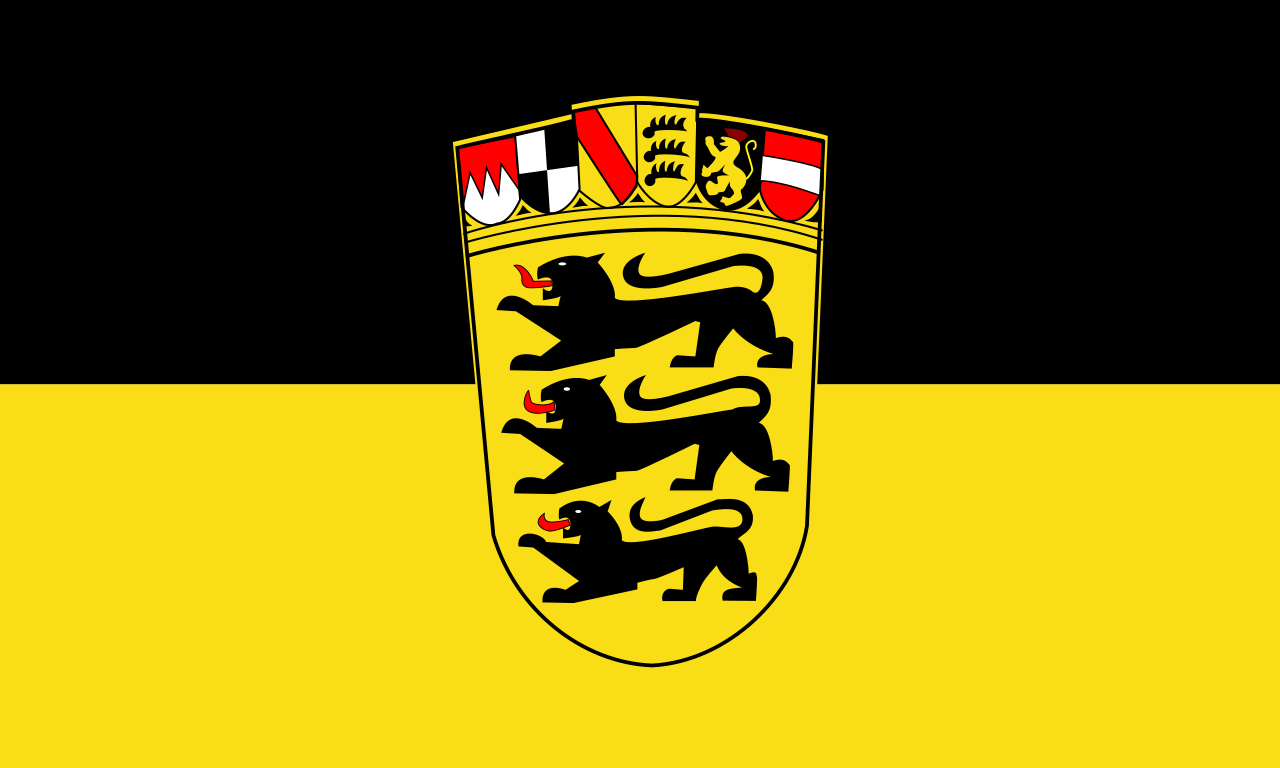