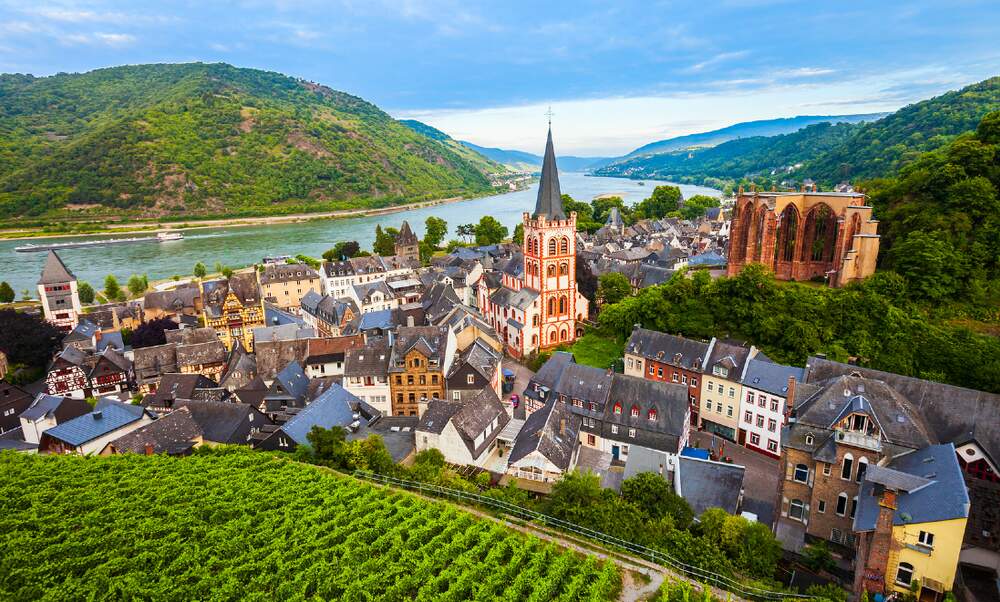 Situated in western Germany, Rhineland-Palatinate (Rheinland-Pfalz) is the country’s seventh-most populous federal state. It is bordered by the states of North Rhine-Westphalia, Saarland, Baden-Württemberg and Hesse, as well as three foreign countries: France, Luxembourg and Belgium.

A brief history of Rhineland-Palatinate

Like many federal states in Germany, Rhineland-Palatinate only officially came into existence after the Second World War, the result of a merger of three historically separate parts of Prussia, Hesse and Bavaria, overseen by the French military - a fitting start for a state with a long history of division and possession by foreign powers.

Archaeological remains of tools from the Stone Age show that human inhabitation of the territory possibly dates back as much as 300.000 years. During the Neolithic period, large areas along the Rhine were settled by Germanic and Celtic peoples, before being incorporated into the Roman Empire in the first century BCE. The cities of Mogontiacum (Mainz) and Augusta Treverorum (Trier) were founded during this period, earning the latter the title of “Germany’s oldest city”.

Between the 5th and 9th centuries, the Rhineland was passed from kingdom to kingdom, belonging first to the Merovingians and then to the Carolingians before being divided in half in 843 to become the western border of the East Frankish Kingdom. Over time, the region splintered into a number of smaller independent states.

To France and back

The 16th and 17th centuries witnessed further territorial divisions, the result of conflicts between Protestants, Catholics and Calvinists in the wake of the Reformation, that ultimately led to the Thirty Years’ War. In the aftermath of the conflict, foreign powers squabbled over the area before it was eventually incorporated into French territories in the late 18th century. After becoming part of the newly-founded German Confederation in 1815, the Congress of Vienna oversaw the area’s division between Prussia, Bavaria, Hesse-Darmstadt and Nassau.

In the aftermath of World War II, the state of Rhineland-Palatinate was created from three distinct areas. A sense of community developed only gradually in this “land of retort”, which had been haphazardly thrown together with little regard to the historical affiliations of its inhabitants - and with little industry of its own to depend on, the odds were pitted against it. For much of the post-war period, Rhineland-Palatinate was one of the poorest states in West Germany.

However, the establishment of a number of foreign military bases gave the area a much-needed boost. Later, wine growing brought both economic activity and cultural identity to the new state, which went on to become Germany’s leading producer of wine. Nowadays Rhineland-Palatinate’s residents derive a sense of pride from the state’s natural and cultural heritage, based on its wine growing regions, picturesque landscape and numerous castles and palaces.

Known as the “state of roots and vines”, Rhineland-Palatinate’s lush, fertile landscape makes it a hub of agriculture and winemaking. Along with Hesse, Rhineland-Palatinate is the most forested federal state in Germany, a full 42 percent of its landmass covered with trees.

The state is characterised by upland plains, dotted with small, hilly mountain ranges - the Eifel, the Hunsrick and the Pfälzer Forest - and crossed by the Rhine, Moselle and Lahn Rivers. This gives Rhineland-Palatinate its distinctive, picturesque landscape of forested land, carved through with meandering valleys and volcanic lakes.

Like much of Germany, Rhineland-Palatinate has two different climates, but it is dominated by a warm, temperate climate. With an average daily high temperature of 14 degrees, it is one of the warmest regions in Germany - but that doesn’t mean the weather is always dry. There is a lot of rainfall even in the driest months of the year.

As you would expect for a state formed from several distinct regions, a number of dialects are spoken in Rhineland-Palatinate. The two major ones - Moselle Franconian (Moselfränkisch) and Palatine German (Pfälzisch) - both form part of the West Central German group of languages.

Palatine German is spoken in the Upper Rhine Valley and beyond the border with Alsace. Pronunciation and grammar vary significantly from region to region, and even between towns. Pennsylvania Dutch, spoken by ethnic Germans who migrated to North America in the 17th to 19th centuries, is descended primarily from Palatine German dialects.

There are a number of larger cities of both regional and national importance in Rhineland-Palatinate.

Rhineland-Palatinate’s state capital city was founded by the Romans and is nowadays both sizeable and lively, with a number of claims to fame, not least having once been home to Gutenberg, the inventor of the printing press. Its carnival is also world-class.

One of the region’s economic powerhouses, Ludwigshafen am Rhein is a large, industrial city best known for its chemical industry. Lying near to the Palatinate Forest, it is within easy reach of some of Rhineland-Palatinate’s best countryside.

Another former Roman outpost, Koblenz was named “Confluentes” for its strategically important location on the meeting point of the Rhine and Moselle Rivers - which nowadays has been transformed into the larger than life “Deutsches Eck” monument. It’s a popular starting point for anyone wishing to explore the Rhine and Moselle Valleys.

Packing in an impressive nine UNESCO World Heritage Sites, Germany’s oldest city is home to a treasure trove of Roman ruins (which have earned it the nickname of “Rome of the North”) - not to mention the country’s oldest bishop’s church, its oldest Gothic church, and Karl Marx’s birthplace.

Nicknamed “K-Town”, Kaiserslautern has long been home to a number of American military bases and thus is well geared-up for expats, offering a lively inner city and good opportunities for leisure, sports and shopping. In the Middle Ages, the town was chosen by Emperor Friedrich Barbarossa as his seat of government.

It’s not got a very attractive name in the English language, but Worms has played a pivotal role in European history - from its founding by Charlemagne in the fourth century to witnessing Martin Luther’s refusal to recant his Protestant beliefs. Nowadays, Worms also hosts the annual Backfischfest, Rhineland-Palatinate’s biggest wine festival and fair.

Surrounded by pretty vineyards at the heart of the German Wine Route, Neustadt an der Weinstraße is a firm favourite among tourists for its romantic, half-timbered old town and historic hilltop castle.

There are many reasons to visit Speyer, but its crowning glory has to be its magnificent Romanesque cathedral, which dates from 1030 and is now the resting place of no fewer than eight German emperors and kings.

Like most German cuisine, traditional food in Rhineland-Palatinate is hearty and characterised by a heavy emphasis on potatoes, onions and meat. However, the state’s proximity to France also makes itself felt in a number of regional specialities with a distinctly lighter touch.

That being said, the most famous dish in Rhineland-Palatinate is probably Pfälzer Saumagen (sow’s stomach) - a pig’s stomach lining, stuffed with minced veal, potatoes, vegetables, herbs and spices, and then cooked in water. Pfälzer Spundekäs - a combination of cream cheese, quark and sour cream - is another indulgent local favourite.

It should come as no surprise that wine is also important in Rhineland-Palatinate - after all, two thirds of all the wine produced in Germany comes from this region - and so it appears on menus not only as an accompaniment to meals but also as an ingredient. Many recipes, especially soups, sauces and desserts, make use of the region’s most famous product.

If you’re stopping in Rhineland-Palatinate, be sure to add these sights and attractions to your itinerary.

Rhineland-Palatinate has plenty of spots to delight keen hikers, none so spectacular as the Eifel National Park, one of the 16 national parks in Germany. Home to wild cats, black storks and several types of orchid, Eifel’s stunning landscape is dominated by dark blue lakes, bubbling rivers and densely forested mountain ranges.

Germany is famous for its fairytale castles and palaces, and Rhineland-Palatinate has more than its fair share. The Palatinate Forest alone contains a whopping 50 plus castles and ruins, offering a wealth of titillating tales of mediaeval chivalry and cracking Instagram shots.

You can’t visit the capital of German wine without sampling the local produce! Established in 1935, the German Wine Route is the country’s oldest tourist wine tasting route. It winds its way through 85 kilometres of Palatine countryside, taking in a number of spectacular sights - and, of course, a tasting room or two - along the way.

The Lorely Cliffs of the Middle Rhine Valley are a UNESCO World Heritage Site and one of the most popular tourist destinations in Germany. Spend a day cruising through the valley’s vine-clad hills, spying mediaeval castles, fairytale towns and mythical rock formations, and you’ll soon understand why.

Rhineland-Palatinate has just one flag, which is used for both civil and state purposes. It is a tricolour of three horizontal bands of black, red and gold - Germany’s national colours. In the top left corner, it has the coat of arms of the state of Rhineland-Palatinate. 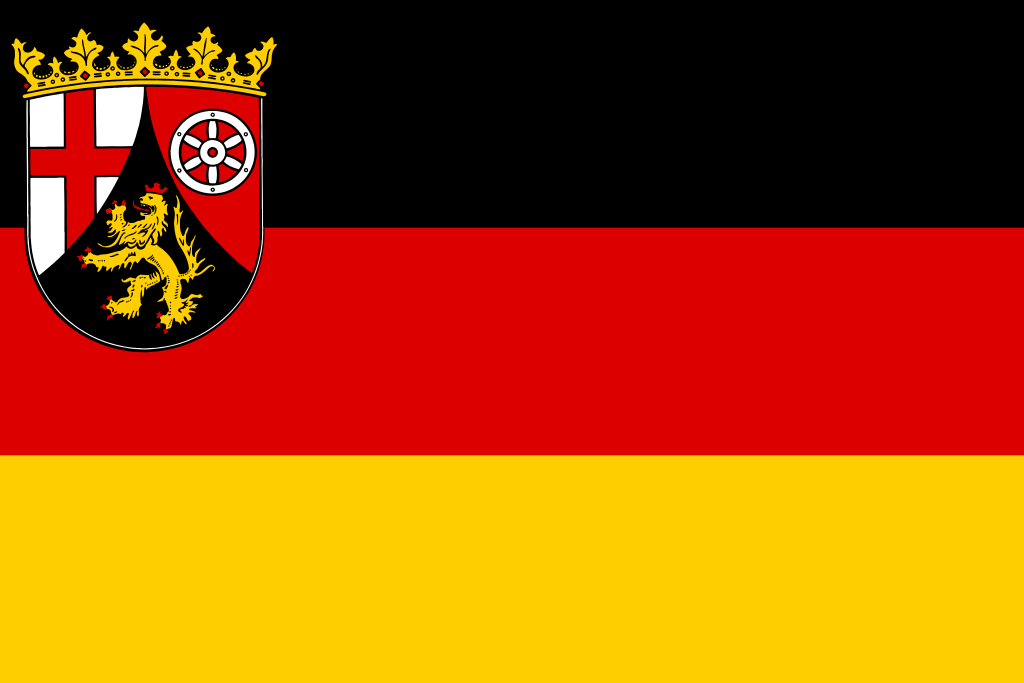