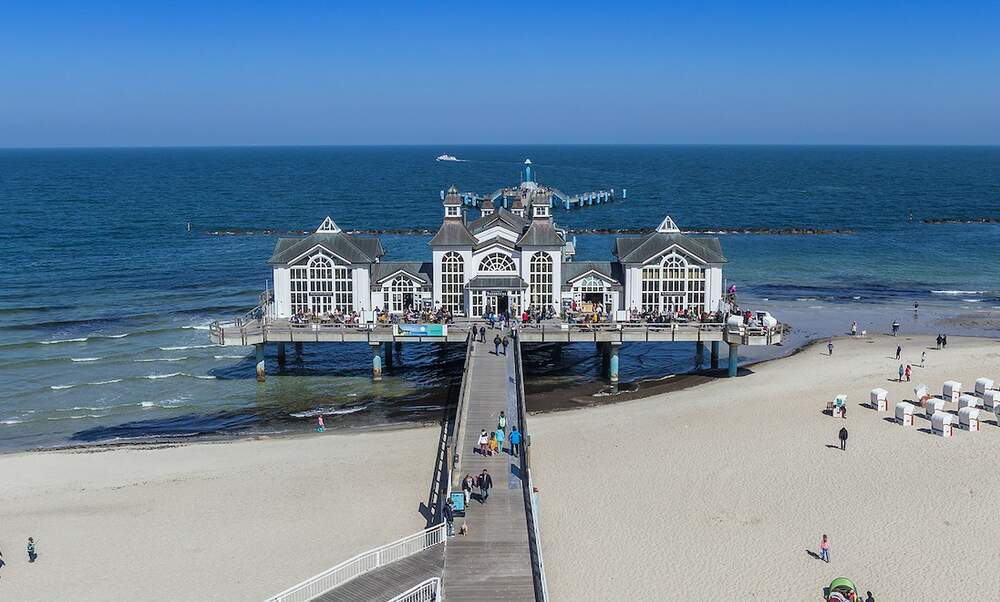 A recent survey has determined and ranked the most popular tourist destinations in Germany. Over 13.000 people from more than 50 countries took part in the vote.

The best places to visit in Germany

The people have spoken. Between November 2019 and July 2020, the German National Tourist Board questioned thousands of tourists from all over the world about their favourite sights and attractions in Germany. Their responses were used to compile a list of the top 100 most popular tourist sites in Germany. So, without further ado, here are the top 10 most popular destinations for tourists in Germany.

Hamburg’s Miniatur Wunderland is the largest model railway and miniature airport attraction in the world and has been voted the most popular attraction for international tourists in Germany for the third time in a row.

The model railway is divided into 9 sections: Harz, Knuffingen (the railway’s fictitious city), the Alps, Austria, Hamburg, the US, Scandinavia, Switzerland, Italy and a replica of the airport in Hamburg. The attraction opened in 2001 and boasts over 15.700 metres of track, 1.040 trains, 269.000 figurines and 4.340 houses and bridges. Since opening, the model railway has attracted over 19 million visitors from all over the world.

The park is home to 13 roller coasters, the oldest being the Alpenexpress Enzian, which takes thrill-seekers through a diamond mine. Alongside roller coasters, the park hosts a number of events, like the Euro Dance Festival, Miss Germany Pageant, several Halloween themed events and rides, as well as a number of themed areas based on different countries including England, Luxembourg, Switzerland and Spain.

Six onsite resort hotels house the park's guests, who also have the option to stay in a tipi, chuck wagon, log cabin or caravan and can even choose to camp onsite. The park can accommodate up to 60.000 guests per day and hosted 5,75 million guests in 2019.

Perhaps Germany’s most famous castle, Neuschwanstein is a 19th century castle that sits atop a hill above the village of Hohenschwangau in Bavaria. The castle is built in a Romanesque Revival style and was commissioned by King Ludwig II of Bavaria.

King Ludwig II commissioned the castle as a private retreat, away from the capital of Munich. Its design is based off the Romanesque style of architecture, which was popular during the Middle Ages and characterised by ancient Roman and Byzantine-style architecture. Ludwig also saw the castle as a representation of the medieval mythology presented in the operas of his friend, Richard Wagner.

Neuschwanstein was opened to the public shortly after Ludwig’s death in 1886, and since then the castle has received more than 61 million visitors. People flock to the castle to marvel at its fairy-tale visage and beautifully decorated interior. The best views of the castle are to be found from the Marienbrücke, the iron bridge leading to the castle. In the grounds, food stalls, horse-drawn carriages and souvenir shops serve some 1,3 million visitors every year.

As the capital of Saxony, Dresden was historically the royal residence of the Electors and Kings of Saxony. Under this royal elite, the city flourished and became known as the “Jewel Box” for its baroque and rococo-style city centre and buildings.

The city was bombed by the English and the Americans towards the end of World War II, entirely destroying the city centre. Restoration work has been underway ever since to try to reconstruct the historic centre.

Dresden is one of the most visited cities in Germany and the fourth most popular tourist destination in Germany, with more than 4,7 million overnight stays annually. Visitors flock to the city to see its myriad of beautiful buildings, parks and gardens, such as the Dresden Castle, Zwinger Palace, Dresden Cathedral (Hofkirche) and the Großer Garten.

Rothenburg is a medieval town in the Franconia region of Bavaria. It was a Free Imperial City from the Middle Ages until 1803, and still retains the look of an old medieval town, which is what attracts so many tourists today. 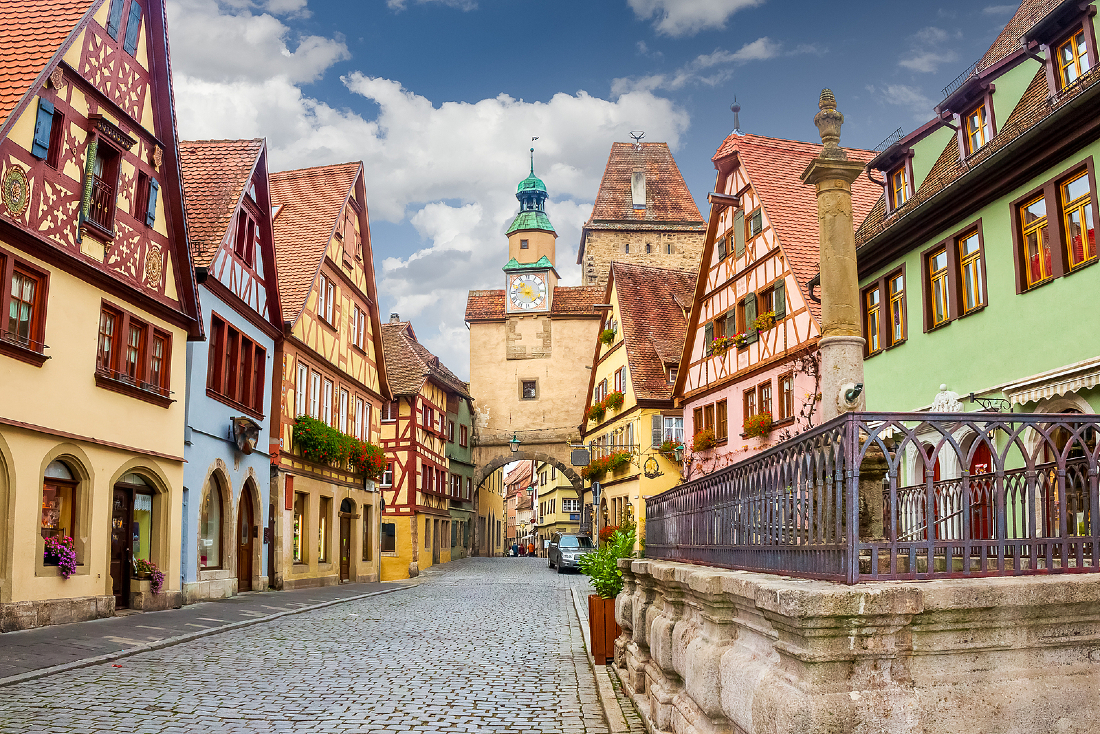 6. The Romantic Road – Bavaria and Baden-Württemberg

The Romantic Road is a 460-kilometre route that runs within Bavaria and Baden-Württemberg, connecting a number of castles and old-style German towns; both Neuschwanstein Castle and Rothenburg lie on this famous road.

The route attracts around 20 - 25 million day trips and five million overnight stays every year. It also generates around 15.000 jobs in the tourism sector.

7. Berchtesgaden and the Königssee – Bavaria

Berchtesgaden is a municipality in the south of Germany, on the border with Austria. The Berchtesgaden National Park was established in 1978 and stretches across three parallel valleys. It was designated a UNESCO Biosphere Reserve in 1990.

The national park is an area of spectacular natural beauty, with a large lake, the Königssee, situated in the middle of it. The lake is known as the cleanest lake in Germany for its crystal-clear water. The park has been left underdeveloped and no settlements can be found within its borders; however, one can find amazing buildings such as St. Bartholomä, a Roman Catholic Pilgrimage Church. 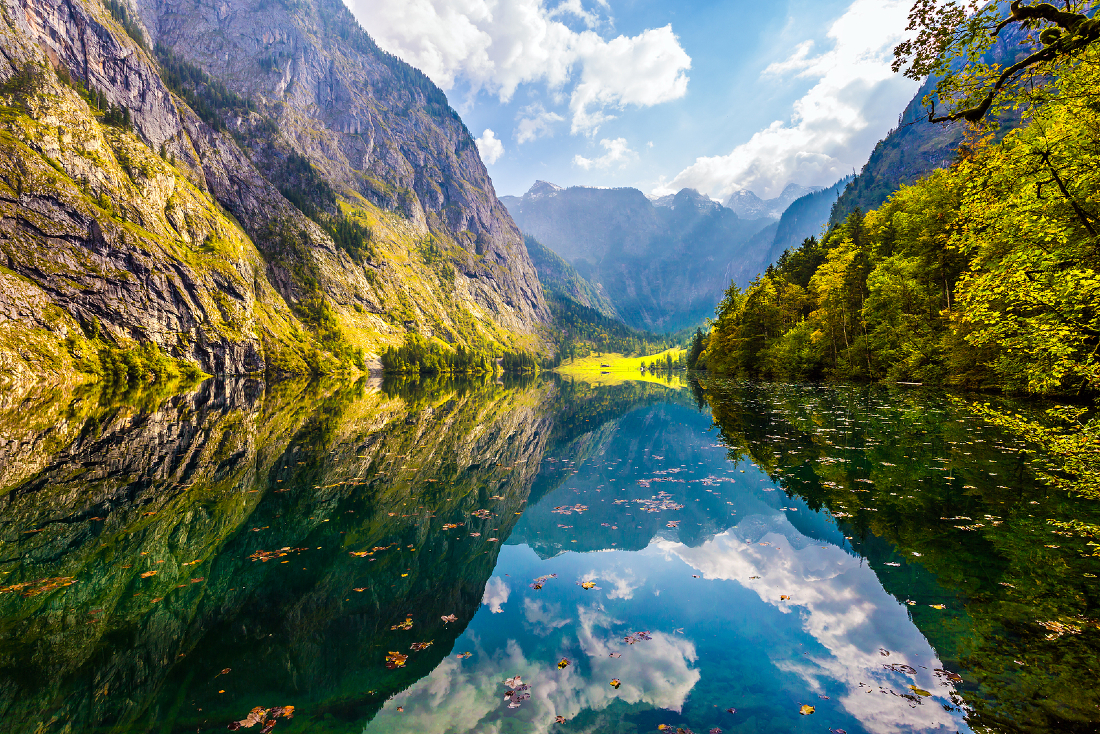 The Hohe Domkirche St. Petrus (Cathedral Church of Saint Peter) is the seat of the Archbishop of Cologne and the Archdiocese of Cologne. A prime example of Gothic architecture, the cathedral in the centre of Cologne was declared a World Heritage Site in 1996.

Construction started in 1248. The architects planned the building to house a reliquary for the Three Kings (the three wise men that visited the baby Jesus), with a scale that would reflect its role as a place of worship for the Holy Roman Emperor. 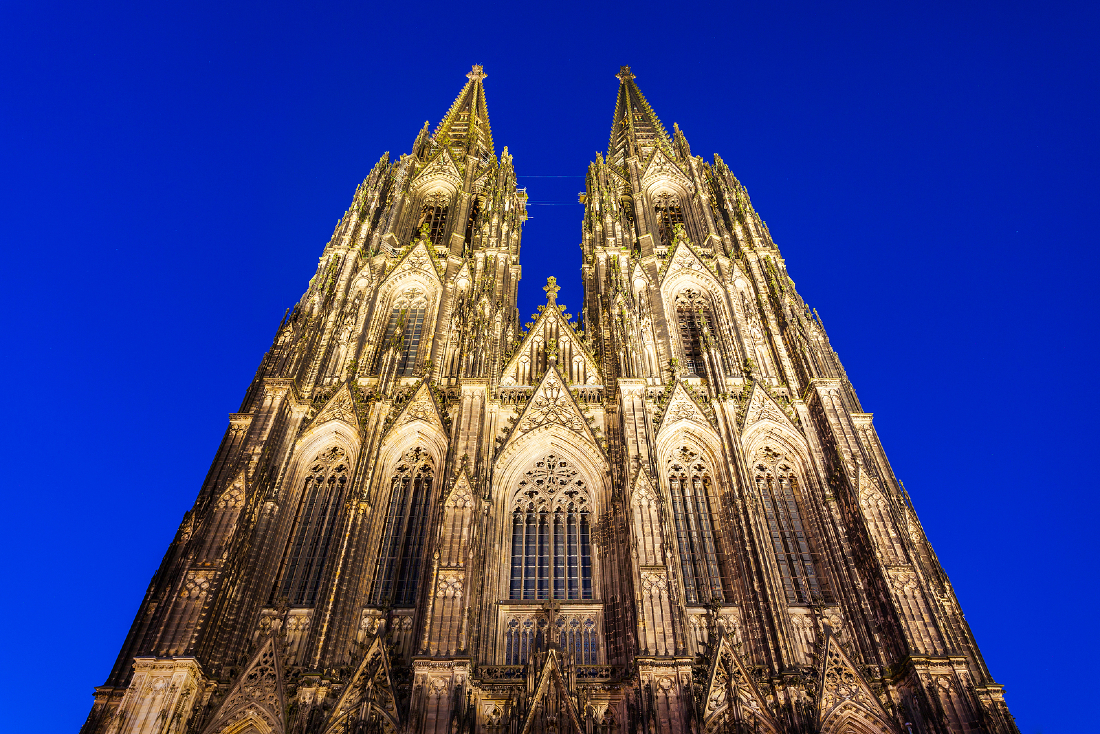 Germany’s famous Black Forest is a forested mountain range in Baden-Württemberg. The two most popular tourist areas are the Titisee lake and Schluchsee lake, where tourists can take part in water sports such as diving and windsurfing. The area is often frequented by backpackers and outdoor enthusiasts for hiking, hang-gliding or paragliding.

The Black Forest is well known for its natural beauty and picturesque towns, which offer a plethora of activities; tourists can take a dip in thermal baths, marvel at floral displays and explore former monasteries and abbeys. 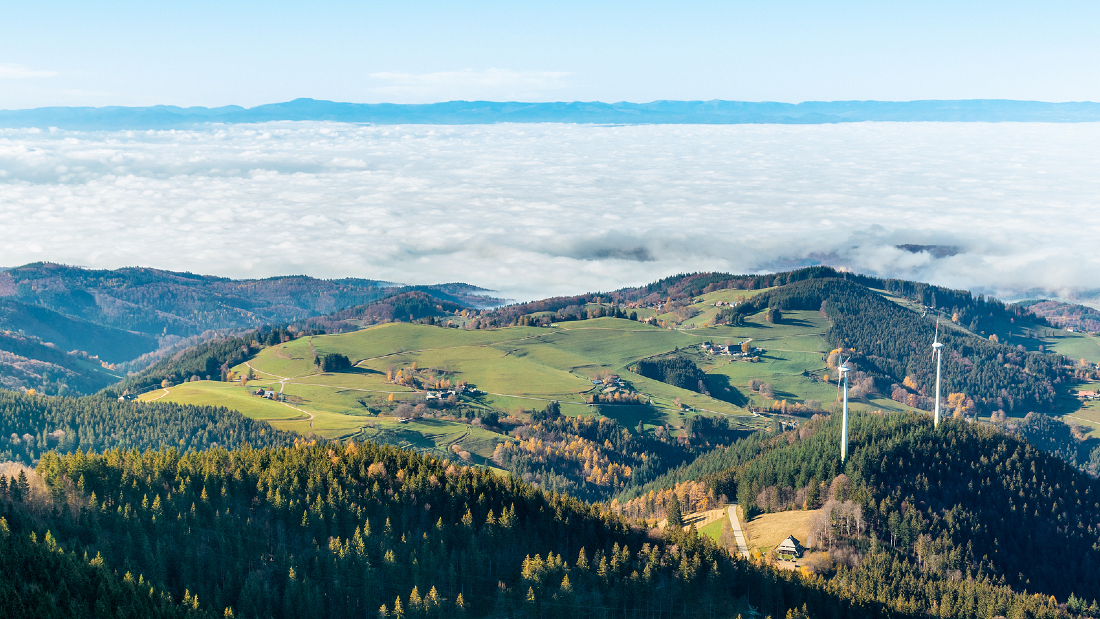 10. The Island of Rügen – Mecklenburg-Vorpommern

The final entrant in the top 10 most popular tourist destinations in Germany is the island of Rügen, situated off the Pomeranian coast in the Baltic Sea. Another area of outstanding natural beauty, the island boasts a number of sandy beaches, lagoons and open bays. The island is home to the Jasmund Natural Park, a UNESCO World Heritage Site.

The island sports a number of resorts, such as Binz, Baabe and Sellin, that are famous for their resort architecture.

Time to get packing?

So, those are the top 10 most popular destinations for tourists in Germany. Hopefully, it won’t be too long until the coronavirus pandemic has passed and we can actually go visit these places! Have you visited any of these places? What did you think? Let us know in the comments below!