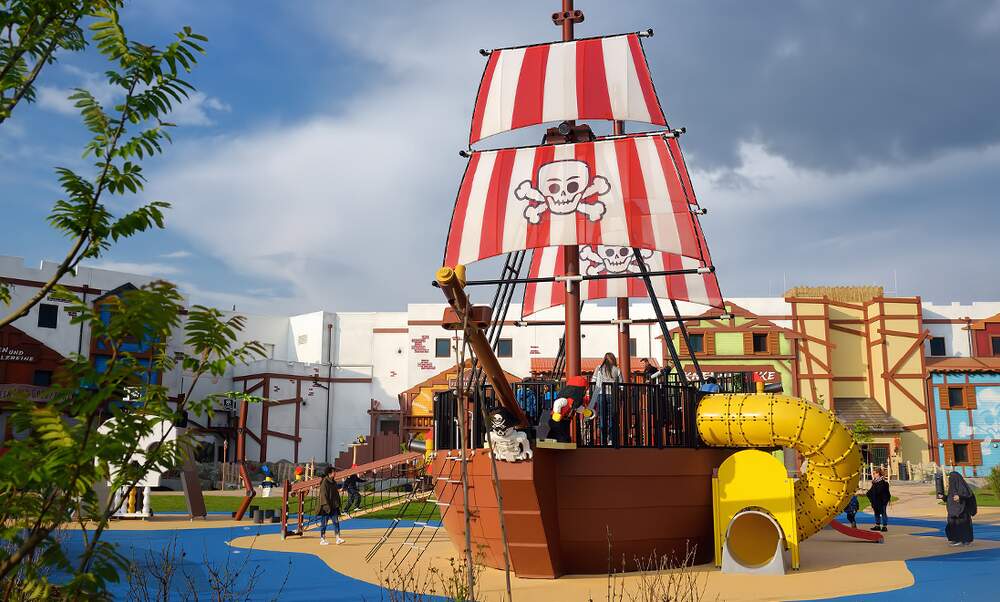 As well as its many other sights and attractions, Germany has a great number of amusement parks. They are located all across the country and vary in style, size and theme. On this page, you can learn about the history of amusement parks in Germany and read descriptions of the kinds of parks you might find.

History of amusement parks in Germany

Although amusement parks - a kind of cross between a pleasure garden and a travelling fair, complete with newly-invented mechanical rides - were already becoming popular attractions in America and Britain towards the end of the 19th century, they arrived fairly late in Germany. The first park did not open until 1929, and even then it was only a simple windmill with a slide.

The German amusement parks that opened in the following years were also relatively low-key: Kirchhellener Märchenwald (later renamed Movie Park Germany) and Phantasialand, which both opened in 1967, started as fairy tale parks with attractions depicting magical stories, playgrounds, restaurants and a couple of flat rides.

Into the 1970s, American theme parks such as Disneyland gradually became a source of inspiration. After a tour of the USA in 1972, Franz and Roland Mack were inspired to set up their own US-style theme park in Germany, as a kind of display floor for their company’s products (which included roller coasters and other rides). Europa Park opened its doors in 1975 and its attractions were immediately a hit - within one year it had already pulled in over 250.000 visitors.

Other amusement parks and entrepreneurs hastened to follow suit, so that today there are more than 30 amusement parks in Germany, offering a varied assortment of attractions.

Where can you find amusement parks in Germany?

Amusement parks are located all across the country, with particular clusters around the German cities of Hanover, Frankfurt, Munich and Stuttgart. Getting to an amusement park might require a bit of planning, as the amount of space required for all the rides means that they tend to be located outside of city centres. Often, you will need to drive or take public transportation. It might even be worth taking a flight. Some long-distance bus companies also organise regular trips to theme parks in Germany.

Amusement parks in Germany are predominately theme parks, which are parks which focus around a single or multiple themes, like fairy tales or countries of the world. Most parks are suitable for all ages and can be enjoyed by young and old visitors alike. The following are some of the biggest and best theme parks in Germany:

Europa Park is the largest theme park in Germany and the second most popular theme park in Europe, attracting nearly six million visitors each year. It is located in Rust, in the south-west of the country, and covers an area of 950.000 m2. The park was opened in 1975 and now consists of more than 100 attractions. The park’s biggest crowd-pullers are its 15 European-themed areas, which feature different countries, from Iceland to Austria.

However, it’s not all about European countries; the park also features areas such as Adventure Land, where you can enjoy a lake adventure or simply take in the beautiful nature; and Grimm’s Enchanted Forest, where you can jump into your favourite fairy tales from the brothers Grimm, like Hansel and Gretel.

Centred around film, Movie Park Germany is located in Bottrop-Kirchhellen in West Germany. As the name suggests, this park is all about movies and TV series. Visitors can take a trip to Bikini Bottom, go on a water slide with Dora the Explorer, or defy gravity on Jimmy Neutron’s Atomic Flyer roller coaster.

The park has several areas with different collections of attractions, such as the Hollywood Street Set and Santa Monica Pier with attractions like the Bermuda Triangle ride and the Crazy Surfer roller coaster. There is something for everyone, with routes specifically designed for those looking for an adrenaline rush, as well as those looking for somewhere to go with the whole family.

LEGOLAND is, of course, all about those tiny bricks with which you can build pretty much anything. Located in Günzburg, right between Stuttgart and Munich, it is one of the biggest theme parks in Bavaria. There are 63 attractions for the whole family to enjoy. Children take on the roles of their heroes and do things that usually only adults are allowed to do, such as taking a driving test or competing in a jousting tournament.

There are 10 park areas at LEGOLAND, which all have their own themed attractions. Visit MINILAND to see some of Germany’s famous buildings replicated in LEGO, as well as those of other cities and countries, or go to LEGO® X-TREME for action-packed rides and the opportunity to programme a LEGO robot. There is plenty to do and see, so if you can’t fit it all into one day, you could also book a stay at the LEGOLAND holiday village.

Serengeti Park is located in Hodenhagen in Lower Saxony, close to Bremen and Hanover, and, as the name suggests, is a theme park that also allows you to go on a safari adventure. You’ll be able to see 1.500 wild and exotic animals in two of the areas dedicated to animals. Of the park’s other two areas, one combines animals and attractions (such as a wild water run with swans, geese and ducks), while the other is completely dedicated to rides and attractions.

There is also an island area that is home to over 200 primates. You can interact with the monkeys without cage barriers and also make contact in one of the five walk-in compounds. Seeking an adrenaline rush? The Adventure Safari area has over 40 rides, including a roller coaster and Ferris wheel.

Phantasialand is located in Brühl, between Cologne and Bonn. This theme park attracts an incredible 1,75 million visitors annually, and is famous for its unique rides and amazing shows. Some of the rides at Phantasialand hold world records, such as the high-speed roller coaster TARON, which is the fastest multi-launch roller coaster in the world, or RAIK, the fastest family boomerang in the world.

The park is divided into six areas: Fantasy, Deep in Africa, Berlin, Mystery, Mexico and China Town. Popular attractions include the Maus Au Chocolat, where you have to shoot mice using pastry bags in a cake factory, and Temple of the Night Hawk, where you ride through the black of night on a virtual hawk.

Located in Leipzig, Saxony, Belantis offers visitors the chance to venture to eight different theme worlds, with themes ranging from mythical to adventure. The park has 60 attractions with something for all ages. The park has eight themed areas, all with exotic names like Island of the Knights, Coast of the Discoverers, Land of the Counts, Prairie of the Indians, Empire of the Sun Temple, Beach of the Gods and Valley of the Pharaohs.

Some of the popular attractions at Belantis are: Huracan, a roller coaster with five loops; Curse of the Pharaoh, where you slide in a boat down the side of a 31-metre high pyramid; and the Labyrinth of Avalon, which challenges you to find your way through the maze. Belantis also has a forest nature trail for visitors to enjoy.

Not far from Hanover, near Soltau in Lower Saxony, you’ll find Heide Park, one of the biggest theme parks in the country. This park has various areas, including the Land of the Forgotten, Pirate Land, Transylvania and the new Peppa Pig Land, amongst others.

Some of the most popular attractions are the Colossos roller coaster, which is one of the steepest wooden roller coasters in the world; Octopus, which is Germany’s first dive coaster, reaching speeds of 103 km / h; and Desert Race, which takes you from 0 to 100km in just 2,4 seconds. The park has plenty of other attractions and rides, so the whole family will be kept entertained.

Located in Cleebronn, Adventure Park Tripsdrill is the oldest amusement park in Germany. In 2019, the park celebrates its 90th anniversary. Rather than have several areas featuring different themes, Tripsdrill focuses on one: Swabia in the 1880s.

Holiday Park is one of the most visited amusement parks in Germany, located in Haßloch, Rhineland-Palatinate. The park is part-woodland, part-park and features the first free-fall tower in Europe. This attraction is still one of the park’s most popular.

Another beloved attraction is the Sky Scream roller coaster, which hits speeds of 100 km / h and has a twisting inversion with descending and ascending twists. The park also has various fun water rides for the whole family to enjoy.

In Rammingen, between Munich and Lake Constance and amidst gorgeous mountain scenery, you’ll find Allgäu Skyline Park, a huge amusement park with over 60 attractions. The park’s three themes - pure adrenaline, family fun and children’s hits - offer something for every age group.

Popular attractions here are the Sky Dragster, the most powerful motorbike roller coaster in the world, which you also happen to drive yourself; Zero Gravity, where the ground drops out from below you and you stay stuck to the wall; and the Wild Water Ride, which features a 30-metre tall waterfall.

Other amusement parks in Germany

There’s so many great amusement parks in Germany, we couldn’t mention them all! Here is our selection of the best of the rest, divided by federal state: