Also known by its official name, the "Free State of Saxony", Saxony (Sachsen) is a landlocked federal state in eastern Germany. It is bordered by the states of Brandenburg, Saxony-Anhalt, Thuringia, and Bavaria, as well as the countries Poland and Czechia. It is the tenth-largest federal state by land area and the sixth most populous.

A brief history of Saxony

The word “Saxony” comes from the “Sahs”, a single-edged sword that was the weapon of choice for a Germanic tribe living in present-day Schleswig-Holstein and gave them their nickname - the “Saxones”. After the collapse of the Roman Empire, some of these Saxons journeyed with another tribe to England (where they became the Anglo-Saxons), while the others gradually made their way southwards to eventually dominate northwest Germany.

The medieval Duchy of Saxony thrived throughout the Early Middle Ages, expanding to include the greater part of northern Germany, including the modern states of Bremen, Hamburg, Lower Saxony, North Rhine-Westphalia, Schleswig-Holstein and Saxony-Anhalt. By the 10th century, Saxony had become part of the Holy Roman Empire and was later merged with the Margravate of Meissen (which became its official name until the 15th century). The Margravate’s prosperity and power was greatly aided by the discovery of silver ore in Freiburg in 1186, giving the region its name: the Ore Mountains.

In 1423, the Margravate acquired the territory of Saxony-Wittenberg and began using the higher-ranking name, the Electorate of Saxony. Its rulers became Electors, powerful individuals who were entrusted to elect the German emperor. In the 18th century Augustus the Strong was also elected King of Poland, and his reign presided over the transformation of Dresden into “Florence on the Elbe”, a magnificent centre of fine art and architecture. As well as building churches, chateaux, opera houses and mansions, he collected his treasures in his “Green Vault”.

Saxony picked the wrong side at the Battle of Nations in 1813 and, following Napoleon’s defeat, was forced to cede half of its territories. The industrial revolution was a boom period for the area, which quickly became Germany’s first industrial centre and, by the turn of the 20th century, its leading industrial region. Leipzig and Dresden were the first mainland European cities to be connected by long-distance railway in the 1830s, while Zwickau and Chemnitz were major players in the foundation of the German automobile industry prior to World War II.

After the Second World War, Saxony fell behind the Iron Curtain. Its economy suffered as companies nationalised and thousands of highly-skilled workers fled to the West. By the 1980s, discontent with the East German regime had reached a fever pitch - and Saxony became a focal point for protests. Three consecutive, peaceful demonstrations in the state demonstrated to the rest of the country that, in great numbers, the masses had the power to topple the regime, without using violence.

Their example quickly spread to different cities across Germany and spelt the end of the GDR regime. The Berlin Wall fell and Saxony was reunited with the West. Enormous changes and economic hardship followed, but Saxony has slowly managed to re-establish itself as a centre of high-tech industry, car manufacturing and hand-crafted luxury products. Nowadays the state has the most vibrant economy of all of the former GDR states, after Saxony-Anhalt.

Saxony’s landscape is primarily composed of hilly and mountainous areas, with the exception of its northernmost portion and the area around Leipzig. The Ore Mountains (Erzegebirge) are Saxony’s chief mountain range, stretching for 160 kilometres along the southern border and reaching heights of more than 1.200 metres.

Along the banks of the Elbe River, to the south of the state, is a picturesque region of hills and deep gorges, a national park known as Saxon Switzerland. The other significant river in Saxony is the Mulde, a tributary of the Elbe. More than half of Saxony’s land area is used for agriculture, and a further quarter is covered with forest.

Saxony has a mild, temperate climate, although the mountain regions can experience harsher weather conditions. As with most regions in Germany, the weather can be pretty wet, with heavy rainfall common in even the driest months. On average, Saxony is one of the coldest regions in Germany with a daily high temperature of 13 degrees.

There is no single “Saxon dialect” but a scattering of different languages and dialects, which are spoken in different parts of Saxony. The most common are the Upper Saxon and Lower Silesian dialects, which form part of the East Central German language group.

Saxony is also notable for having a Sorbian minority population - a reminder of the sizeable Slavic population that settled throughout Saxony in the Early Middle Ages. In fact, many geographic names in Saxony are of Sorbic origin (including Chemnitz, Dresden and Leipzig). The Sorbic language and culture are specially protected by laws in Saxony and some cities and villages in the eastern part of the state have bilingual street signs and even bilingual administrative offices.

Saxony has a number of large and important cities, a reflection of the state’s historical significance as a centre of industry and culture.

Walking among Dresden’s iconic, baroque buildings, it’s hard to believe that the city was all but razed to the ground by Allied bombings in 1945. Saxony’s state capital - affectionately known as “Florence on the Elbe” thanks to its sumptuous cultural collections - is a lively mix of restaurants, shops and nightlife.

We’ve all heard that Leipzig, the largest and coolest city in Saxony, is “the new Berlin”, a funky playground for young creatives escaping the rapidly-gentrifying capital. But Leipzig is also a city with a fascinating history of banking, trade fairs, publishing and classical music.

Known as Karl-Marx-Stadt between 1949 and 1990, Chemnitz was once one of the major centres of German machine and textile industries, earning it the nickname of “Little Manchester”. Since the fall of the Wall it has reinvented itself as a fun city with a friendly and progressive atmosphere.

A former centre of mining at the gateway to the Erzgebirge, Zwickau is best-known as the birthplace of a number of German automotive makes, which are nowadays celebrated in a museum in the city.

Founded by the Sorbs, pretty Plauen was catapulted to prominence in the early 20th century thanks to its booming lace industry, which turned the city into one of the biggest industrial centres in Germany. During the Cold War it hosted a Russian military base and later witnessed some of the first protests that eventually toppled the GDR regime.

Görlitz is Germany’s easternmost city and has the added advantage of having miraculously survived the Second World War almost completely intact. The city’s old town is a dreamy grouping of heritage buildings, cobbled streets and a veritable encyclopaedia of architectural styles.

The cultural centre of Germany’s Sorbian community, Bautzen is an old city that dates back to at least the 10th century. Its town centre is ringed by an imposing fortification with no fewer than 17 towers. Apart from its two infamous GDR penitentiaries, Bautzen is also famous for its mustard.

Much like typical German cuisine, traditional dishes in Saxony can generally be described as hearty and savoury, with an emphasis on meat, potatoes and vegetables. Regional specialities in Saxony include potato soup (made hearty with onions, bacon and sausages), Sauerbraten (marinated pot roast) and meatloaf (known as Wiegebraten or falscher Hase).

Another very important tradition in Saxony is coffee and cake. In fact, the story goes that the first coffee bar in the whole of Germany was opened in Leipzig in the 17th century, and that the Saxons were the first to discover the perfect pairing of coffee with cake - thus beginning a long tradition of so-called Kaffeehauskultur (coffee house culture). The Dresden Stollen, traditionally baked during Advent, is probably Saxony’s most famous cake.

If you’re passing through Saxony, make sure to tick the following sights and attractions off your list:

Laid out from 1815 onwards at the behest of Prince Hermann von Pückler-Muskau, Muskau Park is the largest English gardens in Central Europe and a masterpiece of landscape gardening. It stretches 3,5 kilometres across both sides of the German-Polish border and has been designated a UNESCO World Heritage Site since 2004.

Nowhere is Saxony’s fiercely independent attitude better summed-up than in a 2009 spat over a bridge that Dresden wanted to build close to its city centre. As it happened to fall in the middle of Dresden’s Elbe Valley World Heritage Site, UNESCO threatened to revoke the city's title. Dresden went ahead anyway. Cross the Waldschlösschen Bridge to take in some lovely views, and see what all the fuss is about.

No other part of Germany embraced the Reformation quite like Saxony, which was among the first German states to officially adopt the teachings of Martin Luther - earning it the nickname, “The Motherland of the Reformation”. The fascinating Protestant Church at Hartenfels Castle was the first to be built in Europe, and was personally consecrated by Luther himself.

We might be a long way from the sea, but Saxony has no shortage of beaches. In fact, the man-made lake districts around Leipzig and in Lusatia often boast that they are home to “the longest sand beaches between the Baltic Sea and Adria.”

Everyone likes a good old German castle. This impregnable hilltop fortress near Dresden covers a rock plateau the size of 13 football fields. Impressive enough in itself, but the panoramic views across the Saxon Switzerland national park are simply spectacular.

Both the civil and state flags for Saxony feature a bicolour of white over green. These colours were officially designated the state’s colours in 1915. The flag was formally abolished in 1935 under the reforms of the Third Reich. It was re-adopted in 1945 before being abolished once again under the GDR regime. The flag was finally re-adopted in 1991 after the Reunification of Germany. 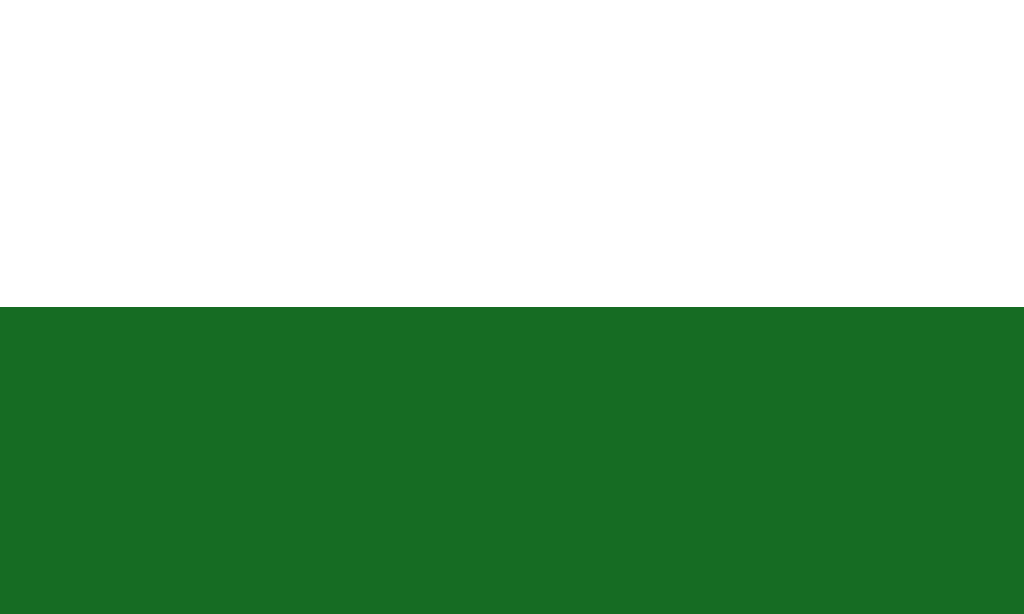 The state flag is identical to the civil flag, except it is defaced with the Saxony coat of arms. 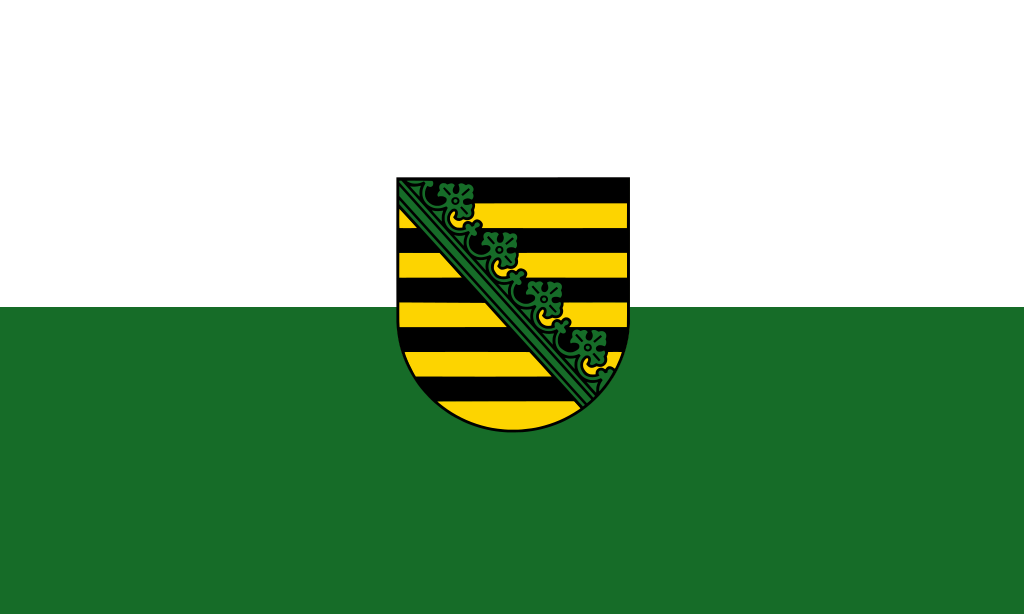