The northeasternmost federal state in Germany, Mecklenburg-Vorpommern (MV, sometimes anglicised to Mecklenburg-Western Pomerania) borders the Baltic Sea to the north, Poland to the east, Brandenburg to the south, Lower Saxony to the southwest and Schleswig-Holstein to the west. Despite being the sixth-largest state in Germany in terms of surface area, it is the least-densely populated.

A brief history of Mecklenburg-Vorpommern

Although the modern state of Mecklenburg-Vorpommern did not come into being until 1945, human settlement in the area can be traced back some 12.000 years, to the period immediately following the Ice Age. The area had been settled by Germanic tribes by the 6th century, but its coast was repeatedly subjected to raids, before eventually being seized by Slavic tribes.

In 1621 Mecklenburg was split into two duchies: Mecklenburg-Schwerin and Mecklenburg-Gustrow (from 1701 known as Mecklenburg-Strelitz). In 1815 both states became Grand Duchies and in 1870 they voluntarily joined the new German Empire on the condition that they could maintain their own internal autonomy.

Pomerania, meanwhile, was ruled by Polish dukes until 1637. Between 1648 and 1815, after the Peace of Westphalia, it was ruled by the Swedes as Swedish Pomerania. It became a province of Prussia in 1815 and remained so until 1945.

Most of Pomerania went to Poland after the Second World War, but Western Pomerania was joined with Mecklenburg to become part of Soviet-occupied Germany. After the war, people who had fled or been expelled from the former eastern territories of Germany settled in the area, swelling the population by 40 percent.

From agriculture to tourism

Mecklenburg-Vorpommern was dissolved in 1952 during a GDR reorganisation, only to be reinstated in 1990 with the reunification of Germany. While the state’s boundaries remained virtually the same, it underwent a fairly radical transformation, as it moved from an industrial and agricultural economy to one focussed around technology, service and tourism.

Nowadays, with its 1.943 kilometres of unspoilt coastline and picturesque, white-sand island, Mecklenburg-Vorpommern is one of Germany’s leading tourist destinations.

Much of Mecklenburg-Vorpommern’s geography was shaped by the last Ice Age; as the glaciers retreated, they left behind a rich, fertile landscape of lowlands and hills dotted with wetlands, lakes, valleys and meandering streams. Around two-thirds of the state is turned over to agriculture and another one-fifth is forested.

The state has more than 1.700 lakes (one-fifth of its total surface area) and contains three of the 14 national parks in Germany as well as several hundred nature conservation areas. The state’s coastline along the Baltic Sea takes in two of Germany’s largest islands, Rügen and Usedom, the former known for the dramatic high chalk cliffs of the Jasmund National Park.

Mecklenburg-Vorpommern is mostly dominated by moderate climate, influenced by the Atlantic Ocean and Baltic Sea. This means that the weather does not vary hugely from season to season, although the summers are somewhat hotter and the winters colder. Overall, it is one of the coldest regions in Germany, with the average annual temperature barely climbing above 9 degrees.

Although the main language in Mecklenburg-Vorpommern is nowadays Standard German (Hochdeutsch), a large number of people still speak Low German (Pattdeutsch or Niederdeutsch), a language closely related to English and Frisian. It is spoken by an estimated two to five million people in northern Germany and 1,7 million people in the Netherlands.

Mecklenburg-Vorpommern may be a rural state, but it’s got no shortage of great cities as well.

The smallest state capital in Germany, Schwerin is famous for its romantic palace, seven (or more, depending on how you count them!) lakes and well-preserved old town. Wander its streets for a taste of the state’s regal past.

It might not be particularly pretty, but the biggest city in Mecklenburg-Vorpommern still has lots to offer, primarily the upbeat energy provided by its large student population. Its main draw is Warnmünde, a spotless stretch of beach to the northwest.

This “city of four gates on the Tollensee Lake” does exactly what it says on the tin: nestled within a largely intact medieval wall, complete with brick Gothic gates, Neubrandenburg is packed with interesting history.

Once upon a time, this city was the second-most important member of the Hanseatic League, and today it still packs a punch with its well-preserved medieval centre, historic cobbled streets and exemplary Gothic architecture. It’s also the seat of German chancellor Angela Merkel.

Ridiculously photogenic with its cobbled streets and gabled facades, this pretty coastal city was once part of Sweden and shows this off in all the best ways. In 2002, the entire old town was designated a UNESCO World Heritage Site.

With a history stretching back some 775 years, Güstrow is the former royal residence of Mecklenburg. While best known for its opulent Renaissance palace, it is also the place where famed sculptor Ernst Barlach spent most of his working life.

Like most German food, the typical cuisine of Mecklenburg-Vorpommern is generally characterised as being down-to-earth and hearty, reflecting the region’s emphasis on agriculture and proximity to the coast.

Unsurprisingly, therefore, seafood and fish feature on many a menu - herring, mackerel and flounder are favourites from the sea, while perch, walleye, trout and eel come from inland waters. The favourite side dish in Mecklenburg-Vorpommer is potatoes (sometimes called Tüften), while other staples include kale and fruit from the state’s orchards.

A visit to Mecklenburg-Vorpommern isn’t complete without taking in the following sights and attractions:

Hands down one of the most spectacular sights you can lay your eyes on in the whole of Germany, Jasmund National Park on the island of Rügen is a stunning mix of rugged coastline, dense woodland and breathtakingly beautiful white chalk cliffs.

You can’t go to the “Land of a Thousand Lakes” without taking in a lake or two. Packed with hundreds of lakes, the Mecklenburg Lake Plateau is the perfect spot to soak up a slice of tranquillity in unspoilt nature or to engage in a spot of sport - no matter whether cycling, windsurfing, canoeing or sailing is your thing.

Nowhere is the Mecklenburg-Vorpommern love for potatoes so crystallised as in the Tribsee Potato Museum, which is actually much more interesting than it sounds. Learn how the potato made its way from South America to Europe and what makes it so valuable in our diets today.

In service since 1886, this cutesy steam train (affectionately called “Molli” by locals) trundles between Bad Doberan, Heiligendamm and Kühlungsborn West on a regular schedule and is an ecstasy of nostalgia for fans of trains. Puff through some of the most gorgeous scenery in Mecklenburg-Vorpommern. 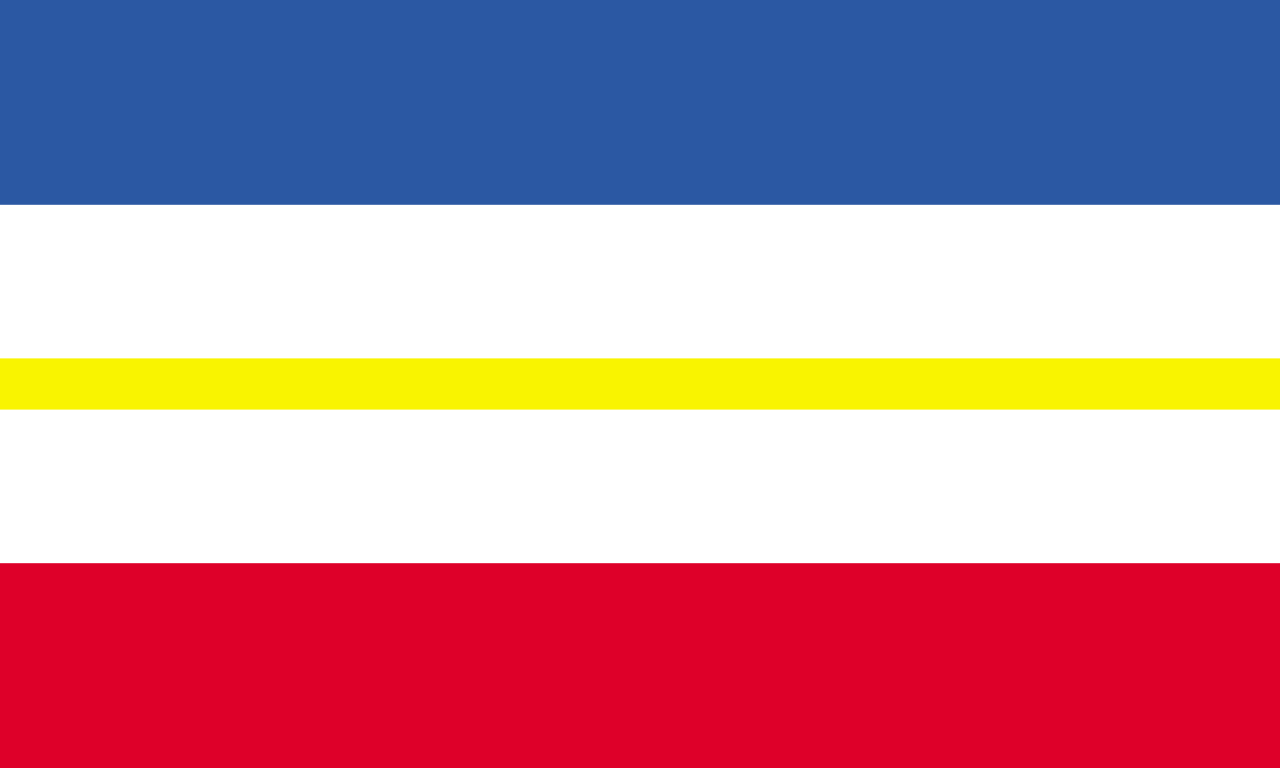 The flag was drawn up in 1990 by Norbert Buske, a member of the Mecklenburg-Vorpommern parliament, after all five submissions for a new state flag were rejected. It combines the flags of Mecklenburg (a horizontal tricolour of blue-gold-red) and Pomerania (a blue-and-white bicolour).

The state flag is the same as the civil flag, except that it features a bull’s head and a griffin, two symbols taken from the Mecklenburg-Vorpommern coat of arms. The state flag is flown by state boats belonging to the police and by other official state bodies. It is also flown on official occasions. 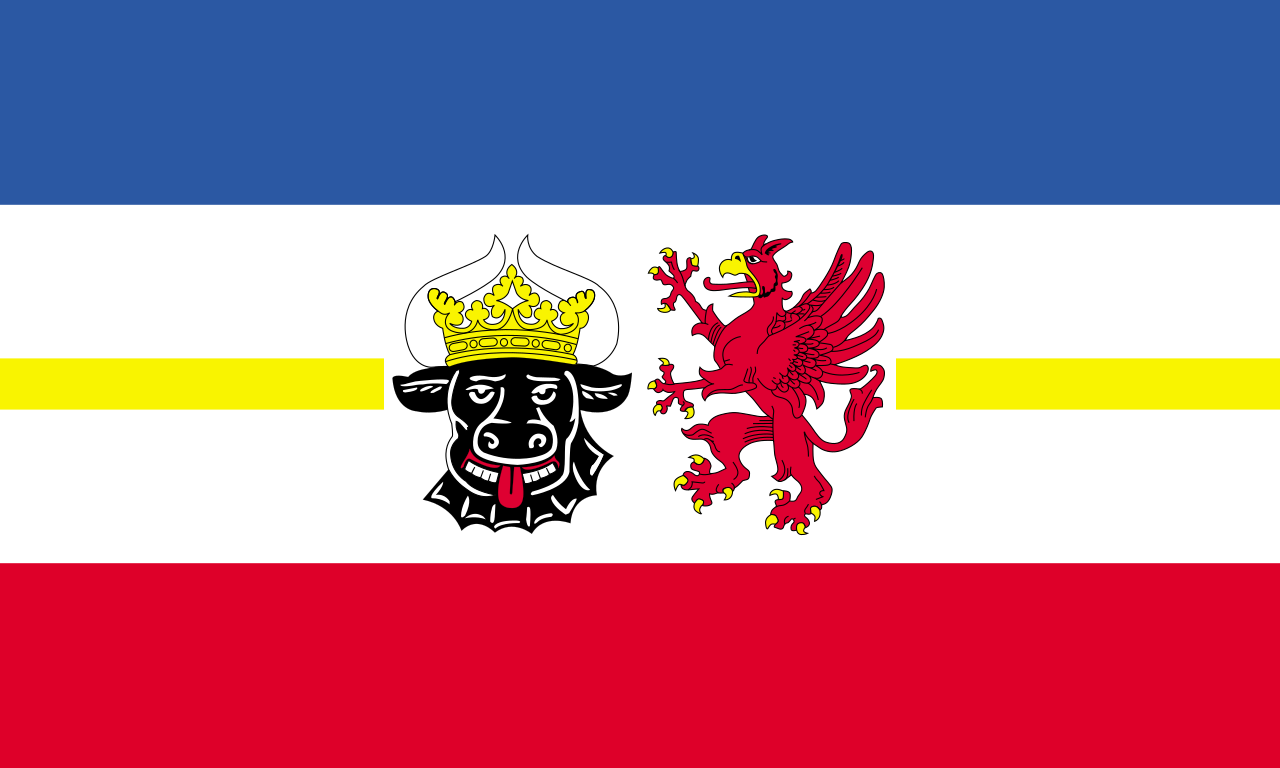