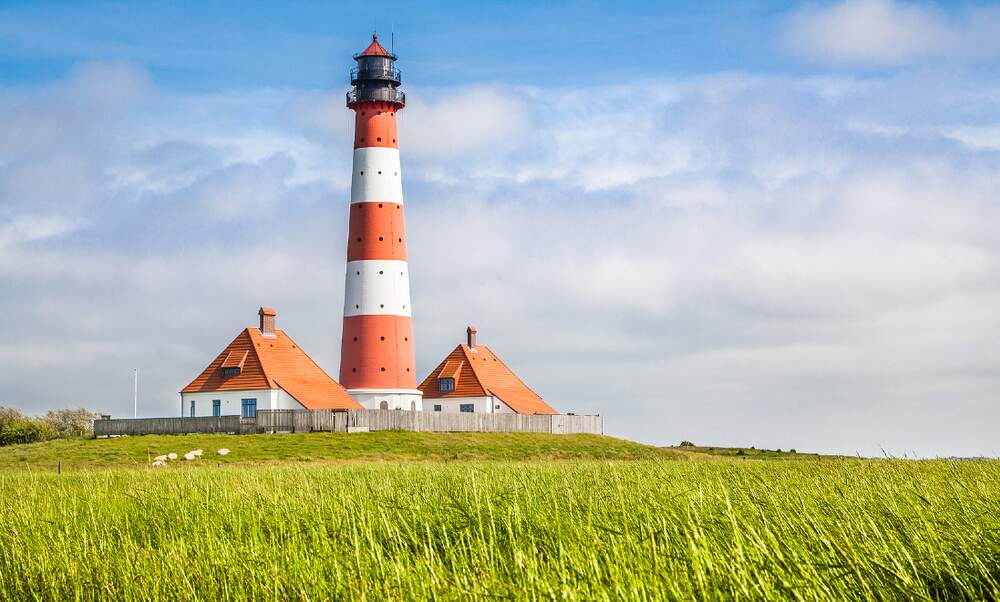 Schleswig-Holstein is the northernmost federal state in Germany. It is bordered by Denmark to the north, and the German states of Lower Saxony, Hamburg and Mecklenburg-Vorpommern to the south. It also has two sea coasts: the North Sea to the west and the Baltic Sea to the east.

A brief history of Schleswig-Holstein

Schleswig-Holstein was created from two distinct regions: the historical duchy of Holstein and the southern part of the former Duchy of Schleswig. “Holstein” comes from Old Saxon, Holseta Land (literally, land of the wood), which originally referred to three Saxon tribes living north of the River Elbe. Schleswig gets its name from the city of Schleswig, derived from the Schlei inlet in the east and the term “vik” (meaning “inlet” in Old Norse or “settlement” in Old Saxon).

Both Schleswig and Holstein have throughout their history been subject to the claims and counterclaims of Denmark, Sweden, the Holy Roman Empire, Prussia and Austria, making the present-day state a unique melting pot of cultures, languages and architectural styles.

Schleswig became a dukedom in the 12th century and remained a fief associated with Denmark until 1864. Holstein was more independent, being ruled for centuries as a duchy by the kings of Denmark but remaining a fief of the Holy Roman Empire. In 1815 Holstein was incorporated into the newly-formed German Confederation. By this time, the population of Holstein was almost entirely German, while the population of Schleswig progressed from Danish-dominated in the north to German-dominated in the south.

During the 1840s, a number of issues surrounding the rights of Schleswig’s and Holstein’s respective German- and Danish-speaking minorities and the succession rights of the Danish royalty coalesced into a dispute over the two territories, often referred to as the “Schleswig-Holstein Question”. This dispute was fuelled by a wave of nationalistic fervour that had been awakened in Germany after the Napoleonic Wars, parallelled by an equally strong nationalist awakening in Denmark.

While Danish nationalists sought to detach Schleswig from Holstein and incorporate it into Denmark, those on the German side wanted the exact opposite. Tensions continued to bubble away throughout the 19th century, spilling over into a series of conflicts between Denmark, Prussia and Austria. Ultimately, after the Seven Weeks’ War of 1866, both Schleswig and Holstein were incorporated into Prussia.

The treaty that ended the Seven Weeks’ War had concluded that North Schleswig would be reunited with Denmark if the majority of its residents voted in favour. After Germany’s defeat in World War I, the question was finally put to the population in a plebiscite in 1920. The result split the region right down the middle: while the northern part of North Schleswig voted 75 percent to return to Denmark, the southern part voted 80 percent to remain within Germany.

North Schleswig was therefore split, creating a Danish-German border that lasts to the present day - it was the only border imposed on Germany by the Treaty of Versailles that Hitler never challenged. After the Second World War, the German part of Schleswig was joined with Holstein to become a state in the Federal Republic of Germany.

Schleswig-Holstein lies on the base of the Jutland Peninsula between the North Sea and the Baltic Sea. Its perimeters are primarily characterised by marshlands, tidal flats and coastal wetlands, especially in the western part of the state. The Wadden Sea national park, the largest national park in Central Europe, lies on the state’s west coast, and also incorporates the North Frisian Islands. Helgioland, Germany’s only high-sea island, is part of Schleswig-Holstein.

Schleswig-Holstein’s Baltic Sea coast is a stretch of sheer cliffs, indented with bays and fjords, with hillier ground and a number of large lakes. The longest rivers in the state are the Elber and the Eide. The Kiel Canal, one of the country’s most important waterways, connects the North Sea and the Baltic Sea.

Despite its northerly latitude, Schleswig-Holstein lies in an area affected by the Gulf Stream, meaning the weather is typically characterised by mild winters and warm summers, high humidity and plenty of rainfall. Nonetheless, it is one of the coldest regions in Germany, with an average daily high temperature of 13 degrees.

While the official language of Schleswig-Holstein is German, Low German (Plattdeutsch), Danish and North Frisian are recognised as minority languages. Low German and Missingsch (a Low German dialect with heavy High German influences) are probably the most widely spoken dialects in the state.

In the northern region of Schleswig-Holstein, there is a small Danish-speaking minority. The mixed language Petuh (a mixture of High German and Danish) is spoken especially in and around Flensburg. Danish and Frisian speakers on the west coast are recognised as national minorities and granted protected status by the state’s constitution.

Kiel is the capital city of Schleswig-Holstein and also the start of the Kiel Canal, the busiest canal in the world. It’s certainly not the prettiest city in Germany, but its impressive waterfront and easy connections to Scandinavia exert a pull.

The Hanseatic City of Lübeck has a proud mercantile history and has been an important German port since the 12th century. Although extensively damaged during World War II, Lübeck’s old town - and in particular its “mediaeval skyline” of seven Gothic-style church towers - have survived intact. The city is also famous worldwide for its marzipan.

Located on Schleswig-Holstein’s east coast, Flensburg is just seven kilometres from the Danish border and thus the northernmost city in Germany. Within Germany, it is virtually synonymous with the central registry of traffic offences that is headquartered there, although most people come for the beer.

With history stretching back as far as the 12th century, Neumünster was originally founded as a monastery in 1127 (the name is derived from the Latin, novam monasterium, meaning “new monastery”). The city grew rapidly as a centre of industry during the second half of the 19th century and remains an important hub for transport in Schleswig-Holstein.

Although not technically a city, Husum is a photogenic gem with its town harbour, colourful houses and narrow cobbled streets. It’s a favourite among tourists making their way to the North Frisian Islands.

Sprats are a regional speciality in the Bay of Eckernförde, with the shimmery golden colour of the smoked fish giving the area its nickname: the Gold Coast. The island of Sylt is also famed for its oysters, producing a full quarter of all the oysters consumed in Germany.

Schleswig-Holstein also plays a prominent role in Germany’s dairy industry, producing around one-tenth of the country’s milk and a number of different cheeses. The state is also famous for its cabbages, 80 million of which are harvested each year, marzipan, and Holstein ham.

The region’s proximity to Denmark is also felt in a number of Danish-influenced dishes. Rote Grütze (Rødgrød in Danish, literally meaning “red groats”) is a sweet fruit dish widely eaten in both Denmark and Schleswig-Holstein (and beyond). It combines red summer berries with sugar and starches that gelatinise into a pudding. It is typically served with milk, cream or custard.

It’s not all sand, sea and candy-striped lighthouses (although there’s plenty of that). If you’re stopping through Schleswig-Holstein, make sure to tick these sights and attractions off your list.

Once a trading post that developed into the second largest Viking city in northern Europe, Hedeby is one of the most important archaeological sites in Germany, containing traces of roads, buildings, cemeteries and a harbour dating back to the 1st century AD. A number of reconstructed Viking houses form an open-air museum village, giving a taste of how the people of Haithabu lived during the Early Middle Ages.

Covering areas of the Danish and Dutch coastlines as well as Schleswig-Holstein, the Wadden Sea is the world’s largest unbroken area of intertidal mudflats and a haven for all kinds of rare wildlife. Explore this fascinating, beautiful and intricate ecosystem on your own or as part of a guided tour. For a real treat, go barefoot and feel the mud squelching between your toes.

The glamorous anchor-shaped island of Sylt is a sandy paradise of boutique restaurants, thatched cottages and luxurious accommodation, making it a firm favourite among the rich and famous. But that’s not to say us ordinary people can’t gleefully partake in its unspoilt, tranquil beaches. Ultimate thrill-seekers can sweat up in one of the saunas and then plunge directly into the chilly sea.

Located on the beach right next to Kiel’s German Naval Memorial, which commemorates sailors of all nationalities who were lost at sea, German Submarine U-995 gives visitors a glimpse into the claustrophobic life on board a submarine. U-995 was used by the Nazis during the Second World War, before being damaged in May 1945 and transferred to Trondheim in Norway. She was returned to Germany in the 1960s and turned into a museum ship.

The flag of Schleswig-Holstein is a blue, white and red horizontal tricolour - almost identical to the flag of the former Kingdom (later Federal Republic) of Yugoslavia and is an inversion of the flag of the Netherlands.

The flag was originally introduced in 1843, before being banned in 1845 and then reintroduced in 1867 after the Prussian annexation of Schleswig-Holstein. It was abolished once again in 1935 before finally being formally reinstated - after much debate - in 1957. The plain tricolour is used for civil functions. 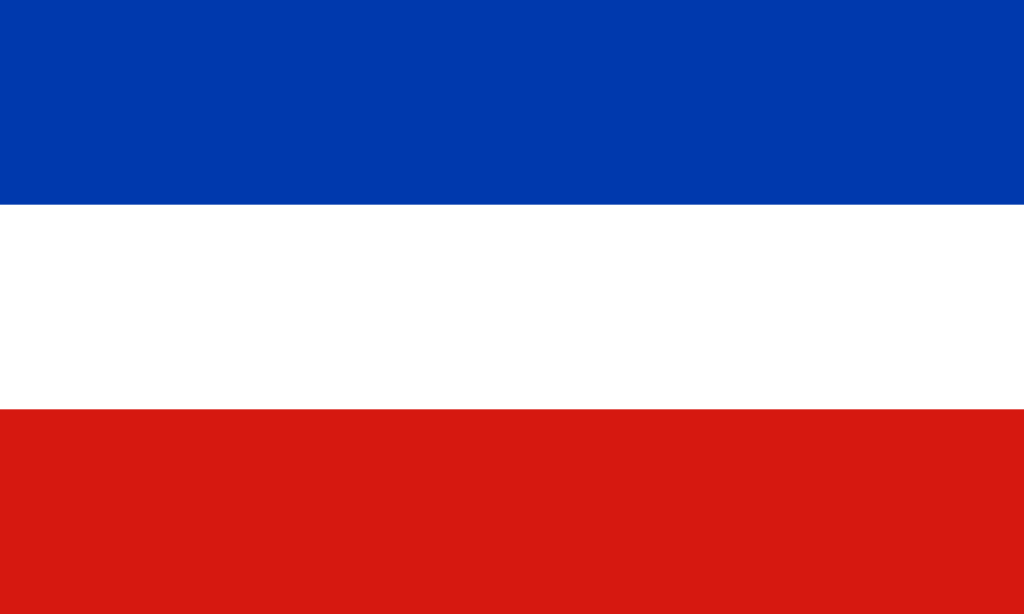 The state flag uses the same tricolour, defaced by the Schleswig-Holstein coat of arms. 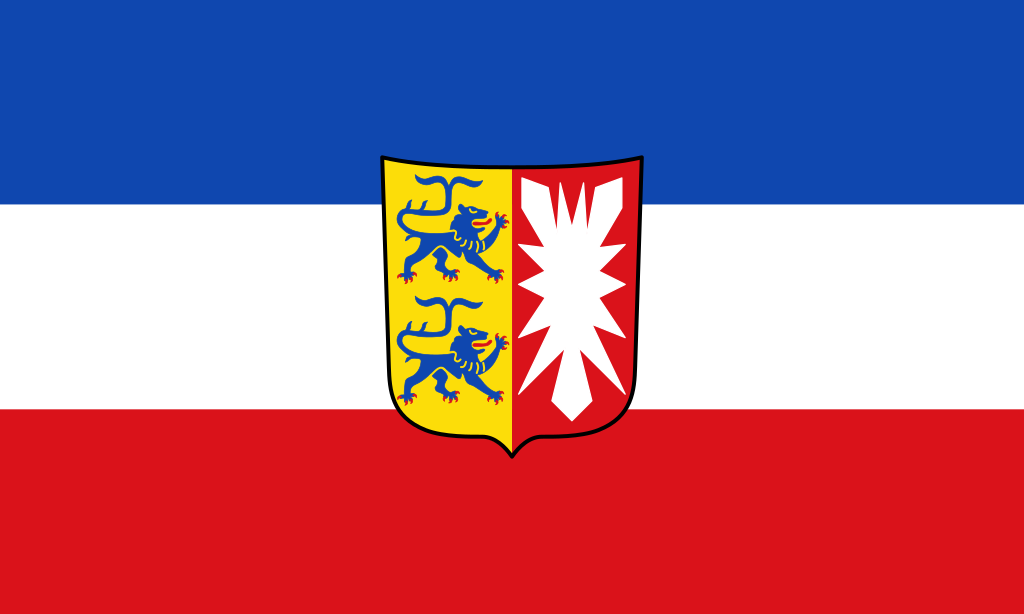