More German than Lederhosen and German beer, the autobahn has achieved an almost legendary status worldwide as the motorway with no speed limit, but the reality on the roads is a little different. In this guide, we separate the facts from the myths, and offer some handy tips for driving on the autobahn in Germany.

What is the autobahn?

How long is the autobahn?

The German autobahn is one of the longest motorway networks in the world (third only to the United States and China), stretching a total length of some 12.996 kilometres.

A brief history of the autobahn

The idea of a “car-only” road, along which vehicles could travel unhampered by pedestrians, bicycles and animal-powered transportation, was first conceived in Germany in the mid-1920s. However, amid the mass unemployment and hyperinflation in the crisis-stricken Weimar Germany, the idea remained just an idea until 1929, when the first car-only road opened between Düsseldorf and Opladen.

It was the mayor of Cologne, Konrad Adenauer (who would later become Germany’s first postwar chancellor) who finally managed to finance and construct the first crossroad-free motorway in 1932.

Still in use today as the A 555, this road was a short 20-kilometre stretch between Cologne and Bonn with two lanes in each direction, and a maximum speed limit of 120 kilometres an hour (although most cars at the time could manage little more than 60).

Shortly after the Nazis came to power in 1933, this road was downgraded to the status of a “country road”. After years of rejecting car-only roads as benefiting only aristocrats and capitalists, Adolf Hitler came to recognise their potential - their power to simultaneously seduce the public and oil Nazi military might - and decided that he would be the one to build the first autobahn: the Reichsautobahn.

With the opening of the first section between Frankfurt am Main and Darmstadt in 1935, the German autobahns became the first limited-access, high-speed road network in the world. With 130.000 labourers participating in the construction, the goal was to complete 1.000 kilometres of road per year.

But, as the war raged on, more and more workers were swallowed up by the arms industry and few could be spared, with the exception of POWs and Jewish forced labourers. By 1941, just 3.800 kilometres of road had been completed, and by 1942, construction had virtually ground to a halt.

After the war, thousands of kilometres of autobahn remained unfinished, and those that had been completed were in pretty rough shape. In West Germany, the government quickly embarked on a widespread, laborious reconstruction programme, investing in new sections of autobahn and making improvements to older ones. Finishing the incomplete sections took so long that some stretches did not open to traffic until the 1980s.

Some autobahns were even cut off by the Iron Curtain, meaning they couldn’t be completed until after the Reunification of Germany in 1990. The East German government had rather neglected their autobahns, choosing to use them for heavy military traffic rather than investing in their reconstruction. After German Reunification, the East German autobahns were incorporated into the West German autobahn network, to make a total length of 8.800 kilometres.

If you're about the get behind the wheel, avoid traffic mishaps and directional confusions with these tips for driving on the autobahn in Germany.

Keep your journey as smooth as the autobahn’s famously well-maintained surfaces, by observing these rules.

Keep these legal requirements in mind:

If pulled over on the autobahn, you must be able to produce:

You must also have the following items in your car:

Germany is the only country in Europe to not have a general speed limit. Instead, it has a “recommended speed limit” of 130 kilometres per hour. You can choose to drive faster than this - it’s not illegal, but it’s not recommended. At the other end of the scale, you shouldn’t really be driving any slower than 80 kilometres per hour (even if you're just learning to drive!)

However - contrary to popular belief in the speed-limit-free-autobahn - there are sections that do have speed restrictions. These might be around construction sites, at junctions, on dangerous sections of roads, or in and around cities. When driving through these sections, you are expected to follow the posted limits, and not resume normal speed until you see an end-of-limit sign or a new speed limit.

A 2017 report by the Federal Road Research Institute found that 70,4 percent of the German autobahn network had only an advisory speed limit, 6,2 percent had temporary speed limits due to the weather or traffic conditions, and 23,4 percent had permanent speed limits. In the face of concerns about safety and the environment, however, the proportion of the autobahn covered by speed restrictions is steadily growing.

Whenever traffic backs up on the autobahn due to an accident or any other emergency, German traffic law requires all drivers to form an emergency vehicle lane (Rettungsgasse) to give easy access to ambulances, fire engines or police.

If the road you are on has two lanes in each direction, drivers must move their vehicles as far as possible over to the left and right, creating a middle lane that can be used by the emergency services. If there are more than two lanes, drivers in the right lanes move to the far right, while drivers in the third or fourth left lane move to the far left. Keep your doors closed and do not stand in the emergency lane, to avoid impeding emergency vehicles.

You should take a break at least every two hours. The autobahn has plenty of rest stops (Raststätten) with petrol stations, restaurants, shops, eating areas and toilets. German service stations have a reputation for being expensive and fairly low-quality, but the situation is gradually improving.

Note, however, that you will normally have to pay to use the toilet - and it’s common autobahn practise to bring your own loo roll with you!

Unlike plenty of its European neighbours, Germany allows passenger cars to drive on its autobahn network for free (for the time being). Drivers of vehicles weighing 7,5 tons and above must pay a toll via an automatic system known as Toll Collect. A toll for passenger cars looks set to be introduced in the near future, but disputes over EU law have caused long delays.

If you cross the border into either Austria, Switzerland or France, however, you will be expected to pay a charge for using their high-speed motorways. While in France you pay per kilometre at a turnpike toll, in Switzerland and Austria you need a flat-rate toll sticker (Vignette) to display in your car’s windscreen.

If you’re used to driving on highways - like those in America - that mention compass directions, it can be confusing trying to navigate your way from A to B on the German autobahn. The blue directional signs don’t tell you which direction you are travelling in - instead, you need to know the names of the major cities along your route (or use a GPS system!)

Good to know: The autobahn numbering system (see below) is another way of telling if the road you are on runs East to West or North to South.

How fast can you drive on the autobahn?

If the section of autobahn you are on has a speed limit - temporary or not - you must stick to it. In sections without a limit, driving faster than the advisory speed limit of 130 kilometres per hour is not illegal.

However, you should note that driving this fast can result in you having increased liability - from the point of view of your car insurance company - in the case of a collision. Some insurers will not pay out for any damages.

How safe is the autobahn?

With cars zipping back and forth between lanes and overtaking each other at speeds of 200 kilometres an hour plus, the autobahn can seem intimidating to the uninitiated. But the lack of speed limit is actually justified on the grounds that it makes driving safer. As recently as 2019, Federal Transport Minister Andreas Scheuer boasted that Germany’s motorways were the “safest in the world.”

Thanks to better engineering and road construction, the fatality rate on German roads has declined consistently since the 1970s; nonetheless, it is still well above the European average. As of 2019, the fatality rate over each 1.000-kilometre stretch of German autobahn is 30,2 percent, compared with the EU average of 26,4 percent.

You might argue, therefore, that the German autobahn is not even the safest motorway in Europe, let alone the whole world.

Do other countries have an autobahn?

Everywhere else in the world, the word “autobahn” is used to refer specifically to the German highway network. In German, however, it is a generic term used to describe the motorway system in any given country.

Here are some useful and fun facts about the autobahn in Germany:

The current autobahn numbering system was introduced in 1975. All autobahn routes are prefixed with a capital “A”, which stands for “Autobahn”, followed by a blank space and a number.

The system is as follows:

Below is a map of these autobahn regions: 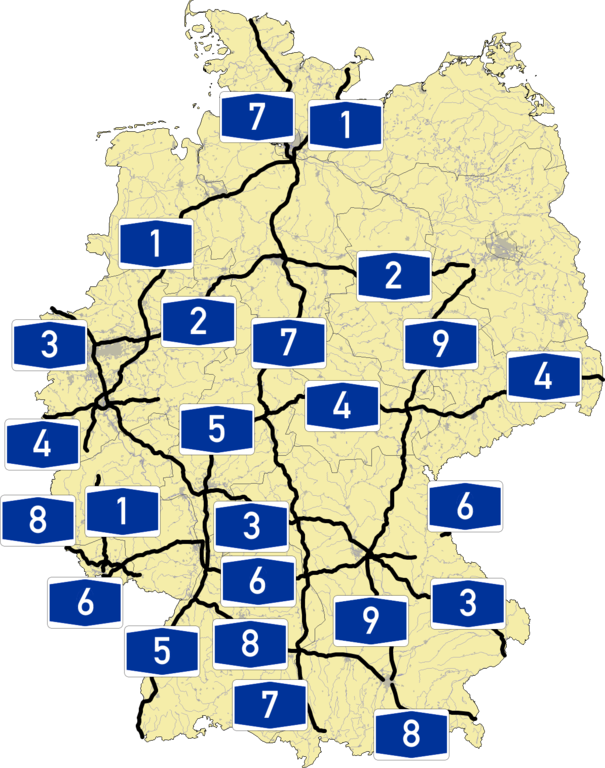 The below map gives an overview of all the major autobahns in Germany: 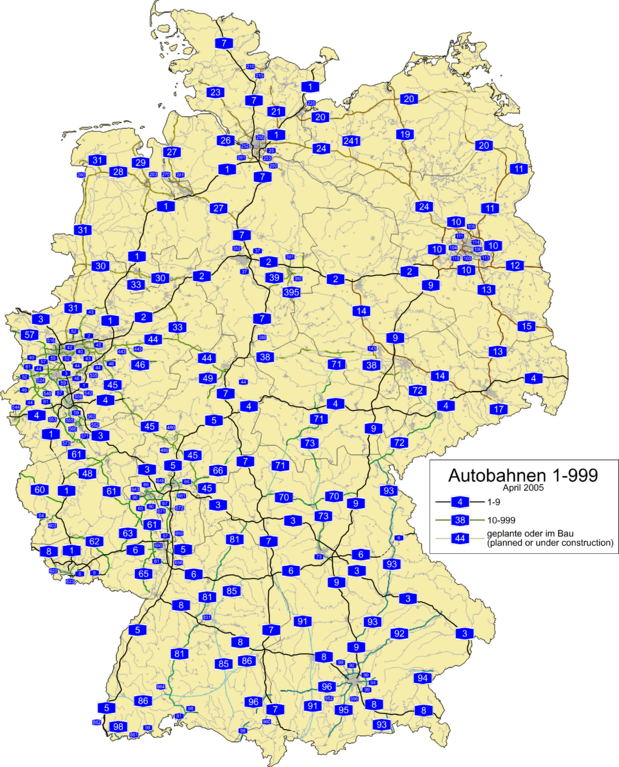