Officially known as the Free State of Thuringia, Thuringia (Thüringen) lies in central Germany. It is the sixth-smallest German federal state by area and the fifth smallest by population. It is bordered by the states of Bavaria, Hesse, Lower Saxony, Saxony-Anhalt and Saxony.

A brief history of Thuringia

The name Thuringia derives from the Germanic tribe Thuringii, which emerged during the Migration Period. They were first mentioned around 400 AD by Publius Flavius Vegetius Renatus and were famed for their excellent horses. By 500 AD they had a large kingdom that stretched from the Harz mountains to the Danube.

In 531, however, the Thuringian king was defeated at Burgscheidungen and the area came under Frankish domination. In the early 8th century, Saint Boniface converted the Thuringians to Christianity. After the Saxon royal dynasty died out in 1024, Thuringia was controlled by the Ludowig family, starting with the memorably-named Louis the Bearded. In 1130 it was made a landgraviate.

In 1246, Landgrave Henry Raspe was elected German “antiking”, in an attempt by Pope Innocent IV to drive the Hohenstaufen dynasty out of Germany. However, he died the following year, prompting a long and bitter dispute over succession. Thuringia eventually came under the control of the Wettin dynasty and was later divided into a number of smaller states. Sections of it also went to Prussia after the Congress of Vienna and the Seven Weeks’ War.

The State of Thuringia

In 1920, several of these old Thuringian territories merged to form a state of the Weimar Republic, called Thuringia. Weimar was its capital. After the Second World War, Thuringia came under the Soviet Occupation Zone and then, following the break-up of Prussia, it was constituted within East Germany. The state was dissolved in 1952 during administrative reforms and divided between the districts of Erfurt, Suhl, Gera, Halle and Leipzig.

Thuringia was reestablished in 1990 after German Reunification. Its borders were returned to those of its postwar predecessor, taking in the southwestern part of the former province of Saxony. Like many former GDR states, Thuringia encountered severe economic problems in the years after reunification, causing its population to drop dramatically and unemployment to spiral.

Slowly, the state has begun to recover, and nowadays has one of the highest concentrations of “new economy” activities of all eastern German states, with a particular focus on biotechnology and the production of microelectronics. Although perhaps little-known abroad, Thuringia’s lush greenery and historical cities also make it a popular destination for German tourists.

Located within the watershed of the Saale (a tributary of the Elbe), Thuringia has been known as “the green heart of Germany” since the 19th century thanks to its densely-forested areas, stretching from the southern foothills of the Harz mountains in the north to the northernmost parts of the Franconian and Thuringian forests.

The central and northern portion of Thuringia then declines into the enormous Thuringian Basin, a flat and fertile area around the Unstrut river that is ringed almost entirely by a number of hill chains. The two most important rivers are the Saale, a tributary of the Elbe, and the Werra. The geographic centre of the Federal Republic of Germany is located in Thuringia, within Vogtei, next to Mühlhausen.

Thuringia has a temperate climate with more continental features towards the southeast, where the summers can be hotter and the winters colder. It is one of the driest regions of Germany, with a below-average number of rainy days per year. It’s also one of the coldest, with an average daily high temperature of 13 degrees. The best weather is to be had between the months of May and September.

It emerged around 1100 AD when settlers from Franconia, Bavaria, Saxony and Flanders moved eastwards to settle in areas previously occupied by Polabian Slavs, and is closely related to the Upper Saxon dialect. Thuringian is characterised by rounded vowels and weakened consonants - especially the “p”, “t” and “k” sounds - and its idiosyncratic, melodic intonation.

The major cities and towns in Thuringia are laid out unusually, in an almost straight geographical line from west to east. They include:

Thuringia’s state capital and largest city, Erfurt is a fabulously well-preserved mediaeval city, complete with beautiful churches, cobblestone streets and fascinating museums. But the city where Martin Luther went to university is far from stuffy, thanks to its thriving student population.

In lively Jena every fifth resident is a student, imbuing Thuringia’s second-largest city with a youthful buzz. As well as once being home to Goethe and Schiller, probably the two greatest German writers, Jena is also famous as the birthplace of precision optics - giving the scientific city its nickname: City of Light.

Located in the Weisse Elster River valley, the former textile city of Gera was once an important centre of industrial production. It was ruled for hundreds of years by the House of Reuß-Gera, whose members have left behind numerous monuments attesting to the city’s former glory.

Most famous for the doomed republic that was conceived here in 1919, Weimar is also a favourite on the tourist map for the pantheon of intellectual and creative heavyweights that lived, worked and made their mark here: Goethe, Schiller, Bach, Nietzsche, Kandinsky and the Bauhaus art school, to name just a few.

A small town on the edge of the Thuringian Forest, Eisenach is best known for its connection to two German greats: Luther, who went to school here and later returned to translate the Bible into German, and Bach, who was born a century later and attended the same school. It is also a former centre of automotive production.

Once famed as the wealthiest and most beautiful city in Thuringia, Gotha has a history stretching all the way back to Charlemagne. The region’s pre-eminent family, the House of Saxe-Coburg and Gotha, were immensely successful in European marriage politics - after the First World War, their descendants reinvented themselves as the Windsors and nowadays still sit on the British throne.

As is the case with most German cuisine, food in Thuringia can be accurately described as rich and hearty, something which is attested to by the state’s two most famous regional specialities: Thuringian potato dumplings (Thüringer Klöße) and Thuringian sausage (Thüringer Rostbratwurst).

Although Thuringians and Saxons might quibble over who actually invented the potato dumpling, there’s no denying that this carb-tastic dish is a firm favourite on both sides of the border. The dumplings are made by mixing grated raw potatoes with mashed cooked potatoes and stuffing them with crunchy cubes of bread. They’re typically served with meat - but are so much more than a side dish. There’s even a museum dedicated to them in Heichelheim.

Thuringian sausages are a unique kind of sausage that enjoy a protected status under EU law: the sausage is made with ground pork or beef, salt, pepper, caraway, marjoram and garlic. The exact spice mix varies from region to region, but at least 51 percent of the ingredients must come from Thuringia. Thuringian sausages can be distinguished from other German sausages by their distinctive flavour and low fat content.

Passing through Thuringia? Make sure to check these sights and attractions off your list.

One of the most beautiful hiking trails in the world, the Rennsteig Trail covers 170 kilometres between Eisenach and Blankenstein, taking in Wartburg Castle, Dragon Gorge, a slice of the Thuringian and Franconian Forests and a number of spectacular lakes along the way. If you don’t want to tackle the whole thing, each of the path’s eight sections can be easily completed in a day.

Perched upon a hilltop overlooking Eisenach and the Thuringian Forest, Wartburg Castle is one of the most famous castles in Germany and has a history stretching back more than 900 years. It’s where Martin Luther sought refuge after being excommunicated. Nowadays, it’s a UNESCO World Heritage Site and one of the state’s top tourist attractions.

Do you believe in fairies? Once a slate mining pit, this colourful complex of caves, caverns and pools was rediscovered in 1910 after lying undisturbed for centuries, giving nature time to form hundreds of stalactites and stalagmites in a dazzling array of colours. The Guinness Book of World Records has deemed them the “most colourful grottoes in the world”.

The Zeiss-Planetarium in Jena is the oldest continuously operating planetarium in the world, having opened on July 18, 1926. Nowadays, its brand new projection system provides education and entertainment in equal measure as you jet off to explore far-flung worlds.

A stark reminder of one of the darkest chapters of human history, Buchenwald lies just a few miles outside of Weimar. When it opened in 1937, it was one of the largest concentration camps in Germany, imprisoning more than 250.000 people. In 1945, it was turned into a Soviet internment camp. Touring the camp’s cells, watchtowers, crematorium, station, quarry and graveyards is a harrowing but essential experience.

The flag of Thuringia is a bicolour of white over red. It ws first introduced when the state of Thuringia was formed within the Weimar Republic in 1920, before being abolished under the Third Reich, re-adopted in the postwar years and then abolished once more during GDR administrative reforms in 1952. It was finally re-adopted in 1991, when Thuringia was reestablished as a state after German Reunification.

It is the exact reverse of the flag of Hesse, since both states use the heraldic colours of the Ludovingian rulers from the mediaeval Duchy of Thuringia. The resemblance to the Polish flag is coincidental. 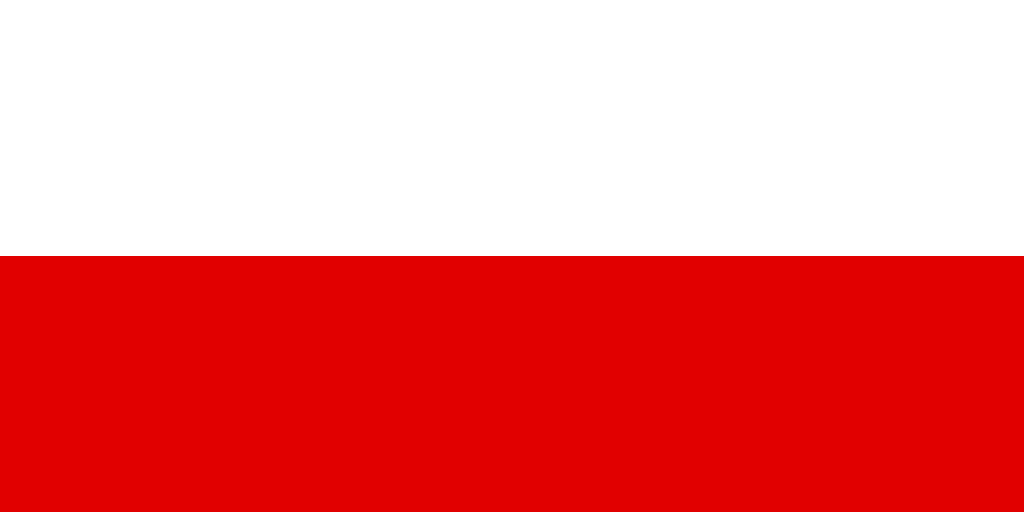 The state flag uses the same bicolour, defaced with the Thuringia Coat of Arms, which is also very similar to that of Hesse, since both are based on the old arms of the Ludovingian Landgraves. 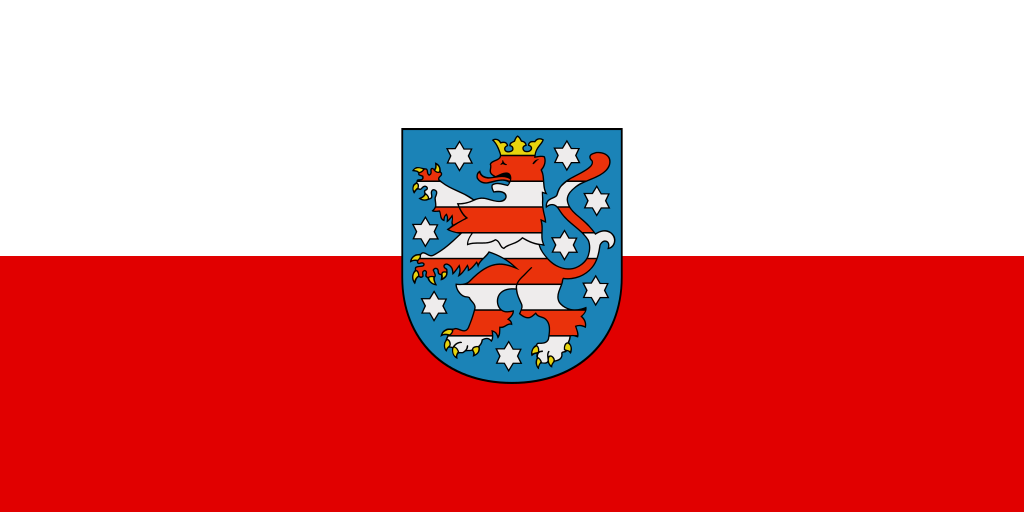