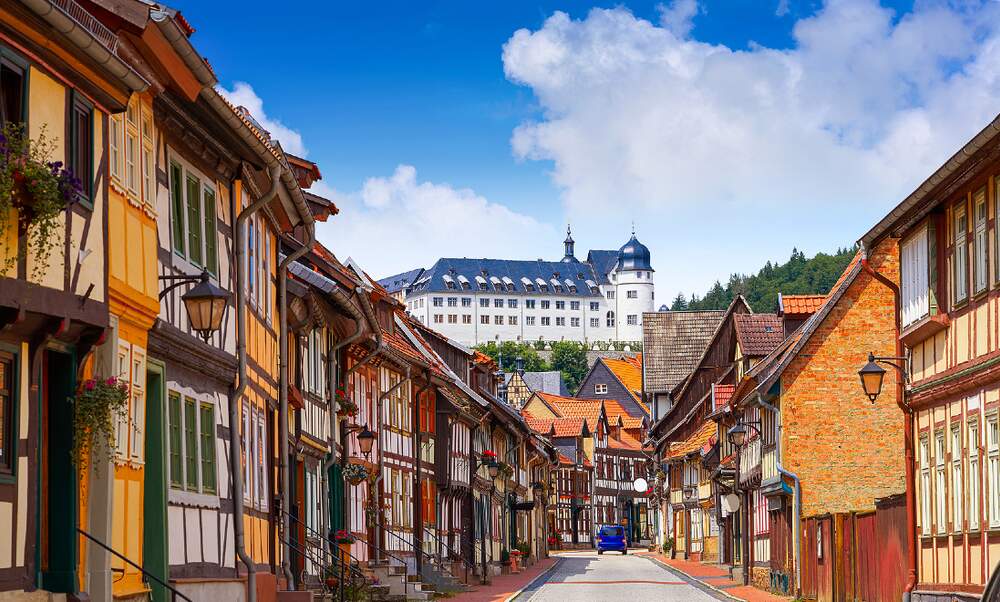 The eastern-central state of Saxony-Anhalt (Sachsen-Anhalt) is the eighth-largest federal state in Germany by land area and the 11th-largest by population. It is bordered by the states of Brandenburg, Saxony, Thuringia and Lower Saxony.

A brief history of Saxony-Anhalt

Although the state of Saxony-Anhalt didn’t come into official existence until 1945, it has roots stretching back thousands of years, when early settlers were first attracted to the area by its rich and fertile soils. These first inhabitants left behind a number of treasures, including the neolithic Goseck circle and the Nebra sky disk.

The Duchy of Saxony

The area was conquered by Charlemagne in the early 9th century. This self-styled “Emperor of the Romans” elevated it into the Duchy of Saxony. It would later become one of the stem duchies of the German Kingdom and, subsequently, the Holy Roman Empire. Over time, the duchy gained wealth and importance, producing numerous feats of impressive architecture. Otto I, later considered to be one of the first “German” rulers, was buried in Magdeburg.

Perhaps the most famous resident of what is nowadays Saxony-Anhalt was Martin Luther, the Father of the Protestant Reformation. Originally hailing from Eisleben, Luther studied law before ordaining a priesthood and subsequently becoming embroiled in a theological dispute over the sale of indulgences, eventually driving him (or so the story goes) to nail his 95 theses on the door of the Schlosskirche in Wittenburg in 1517 - ultimately causing the Christian faith to be cleaved in two.

The Sacking of Magdeburg

In the ensuing years, Saxony-Anhalt became a largely Lutheran area, with the city of Magdeburg especially flaunting its Protestantism in a display of independence from the Catholic-leaning emperor. In 1631, during the Thirty Years’ War, the city was brutally sacked and almost completely destroyed by the Catholic faction, bringing it to such a low that it would only recover during the Industrial Revolution.

After the unification of Germany in 1871, the region became the geographical centre of the new German Empire and prospered as an agricultural and industrial powerhouse. In 1925, the Bauhaus - which would later become one of the world’s most famous schools of art, architecture and design - set up a new home in Dessau. By 1932, however, the NSDAP had become the strongest party in Saxony-Anhalt and, rejecting the school as a centre of communist intellectualism, forced it to close down.

Like much of the rest of Germany, Saxony-Anhalt’s cities sustained heavy damage during the Second World War. After Germany’s unconditional surrender in May 1945, the province of Saxony-Anhalt was formed, before being dissolved in 1952 and then finally reinstated in 1990.

After the fall of the Berlin Wall, Saxony-Anhalt experienced a sharp decline - driven by the downturn of coal and lignite mining - and lost roughly one-fifth of its population between 1960 and the turn of the century. By the early 2000s, the state was considered one of the poorest in Germany.

Nowadays, Saxony-Anhalt has begun to recover, with its food-processing, metalworking and chemical industries enabling it to rise in economic importance. Moreover, thanks to its rich cultural heritage - the state is home to the highest concentration of UNESCO World Heritage Sites in Germany - it has slowly built a reputation, both within Germany and beyond, as a fantastic tourist destination.

Almost the entirety of Saxony-Anhalt lies within the North European Plain. The northern part of the state is dominated by a flat landscape which gradually gives way to hillier territory in the south as the land rises towards the foothills of the Harz mountains. The highest mountain of the Harz is the Brocken, with a height of 1.141 metres.

The Elbe River flows through the eastern and northern portions of the state, while the Saale and the Mulde are the two most important rivers in the south. The sandy plains produced by these rivers are interspersed with fertile farmlates, pastures, pine forests and boglands. Roughly one-fifth of Saxony’s land area is forested.

Most of Saxony-Anhalt has a temperate climate influenced by the Atlantic Ocean, making it one of the warmest regions in Germany - although the weather in the Harz mountains is significantly harsher. The average annual temperature is 14 degrees, rising to an average high of 24 degrees in July, and falling to an average low of -1 degrees in January.

The Upper Saxon and Thuringian dialects are both spoken in parts of Saxony-Anhalt. Both are part of the East Central German language family and are closely related - often being referred to together as the Thuringian-Upper-Saxon dialect group.

These dialects are thought to have emerged during the medieval Ostsiedlung migration (around 1100 AD onwards), when thousands of Germanic-speaking peoples migrated eastwards and settled in less-populated regions of Central Europe, Eastern Europe and the Baltics. Since all these settlers spoke different dialects, over time they merged and took on other influences to become a common language.

Saxony has four major cities, all of which are worth a visit:

The state capital of Saxony-Anhalt is Magdeburg, one of the country’s oldest cities. Thanks to World War II bombing and questionable architectural choices in the post-war years, it might not be winning any beauty competitions, but the pull of this city is on the green banks of the River Elbe, where beer gardens, beach bars and bike paths beckon.

Saxony-Anhalt’s largest city, Halle is famous for being the birthplace of the composer Georg Friedrich Händel and was once one of Germany’s most important industrial centres. It’s packed with interesting history and pretty architecture. Located on the River Saale, it’s often called Halle an der Saale to distinguish it from other places in Germany with the same name.

Formed from the merger of the towns Dessau and Roßlau in 2007, Dessau-Roßlau is the third-largest city in Saxony-Anhalt. Dessau was historically the capital of the Duchy of Anhalt and later became famous as the seat of the Bauhaus school. The region also boasts two UNESCO World Heritage Sites.

Granted, it’s not an enormous city, but Osterwieck more than deserves a mention because of its remarkably well-preserved old town. Dating back to around 780, this historic city is peppered with an incredible amount of mediaeval architecture. Approximately half of the timber houses were built before 1720 and more than a third date from before the Thirty Years’ War. It really is like walking through the pages of a history book!

Saxony-Anhalt’s fertile soil makes it an important agricultural area in Germany. Many of the ingredients typically found in German cuisine are grown here, including rye, potatoes, onions, apricots and asparagus. The latter is a key ingredient in one of Saxony-Anhalt’s regional specialities: Altmärker Hochzeitssuppe (Altmark Wedding Soup), which is traditionally served as a starter at weddings to ensure lifelong happiness. Milbenkäse (mite cheese) is a speciality cheese, made of quark flavoured with caraway and salt, that is found in Saxony-Anhalt.

Saxony-Anhalt is also known for its chocolate and cakes. Germany’s first chocolate factory, owned by the Confiserie Halloren, was built in Halle in 1804 and began churning out bars, truffles and pralines to the masses. A famous cake from Saxony-Anhalt is the Salzwedeler Baumkuchen (Salzwedeler Tree Cake), an intricate, layered confection that was invented at the courts of German royalty over 200 years ago.

If you’re heading to Saxony-Anhalt, make sure to stop off at these sights and attractions:

Tick off another of the world’s wonders by paying a visit to the Bauhaus buildings in Dessau, which includes the school’s original campus (containing a museum, a shop and the restored cafeteria), as well as a number of houses and apartment blocks in the area - which are all some of the most iconic buildings of the 20th century. Tourists can even stay overnight in the Bauhaus building!

Saxony-Anhalt has a remarkable number of well-preserved mediaeval towns, but none shines brighter than Quedlinburg, which is widely agreed to be the best-preserved in the whole of Germany. Picture perfect, this gem of a town is an absolute dream of tangled cobblestone alleys, pretty market squares and no fewer than 1.300 timber-framed houses.

The Harz mountains national park is a paradise for hikers, train riders and explorers alike. Take the challenge of scaling the 1.141-metre peak, or let a locomotive do all the hard work as you relax and enjoy the dramatic scenery from the cosy Schmalspurbahn train. Thrill-seekers can cross the world’s biggest pedestrian suspension bridge, which stretches 458 metres across the Rappbode Dam, or join the costumed revellers at the Witches’ Dance Floor on Walpurgis Night.

The flag of Saxony-Anhalt is a yellow and black bi-colour with the state’s coat of arms in the centre. Black and yellow were historically the colours of the Prussian Province of Saxony and the state of Saxony-Anhalt before 1952. In 1991, however, it was decided that the colour should be reversed to distinguish it from the black-over-yellow bi-colour used by Baden-Württemberg. Since 2017, the flag has been used for both civil and state purposes. 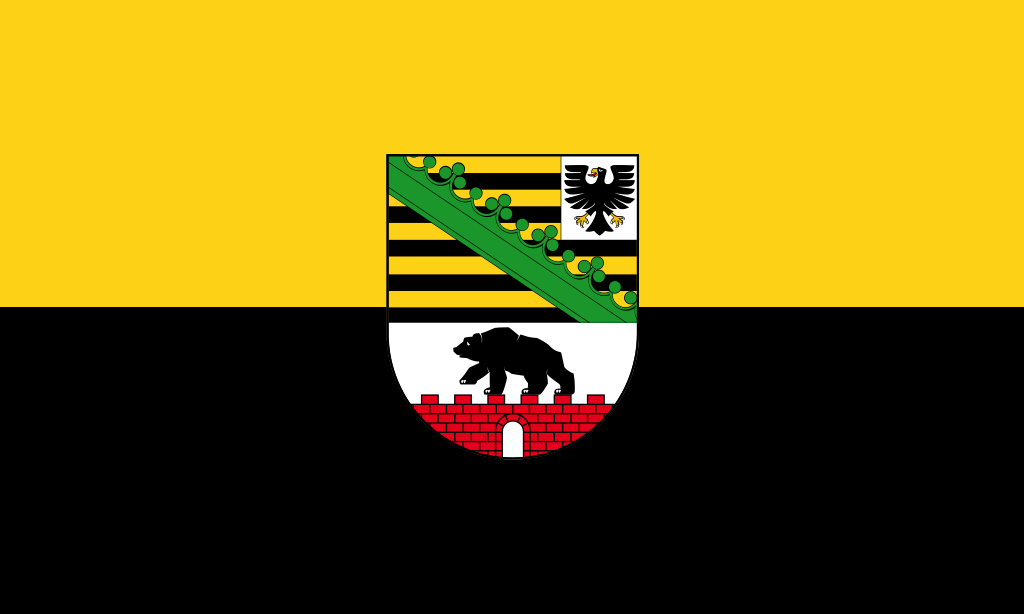